Lockdown has destroyed the Australian spirit

This once easy-going country has become illiberal, mistrustful and divided. 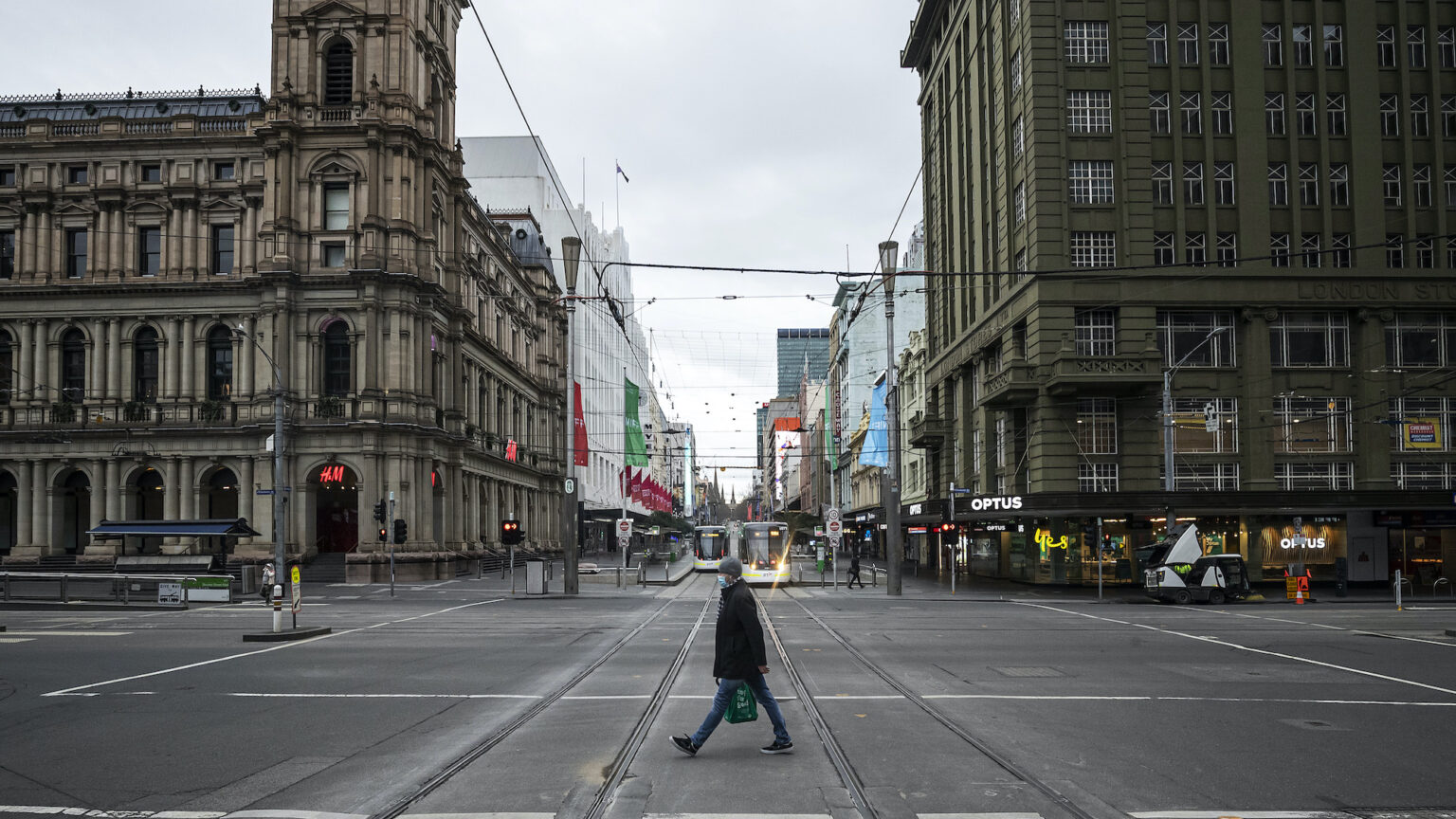 Australia is currently ranked 104th in the world for coronavirus deaths – a victory of sorts in the eyes of the laptop class which now runs much of our lives. Yet the cost of this achievement is incalculably high and the damage to civil society may never be fully repaired. The ever-changing list of petty edicts has tugged at the threads of the social fabric in countless ways, and Australia is a less companionable country as a result.

Before Covid-19, it would have been the height of bad manners to speak rudely to a member of the cabin crew on a Qantas flight. Today, ‘hostile abuse’ is so common that Australian airlines, backed by Australian Federal Police, are running a campaign warning that on-board ill-temper can earn you 10 years in jail and a six-figure bill for the cost of diverting an aircraft. The rise in rudeness is attributed solely to the rules on mandatory masking, a rule imposed by a federal-government agency with little regard for cabin staff, whose job changed overnight from being dispensers of chicken or beef to the face-covering police.

This vignette illustrates how the lurch to authoritarianism since the arrival of Covid-19 is eroding the spirit of mutual respect that once made Australia such an even-tempered place. DH Lawrence’s description of the easy-going people he encountered on a visit to Sydney a century ago, a place where ‘everything was very easy, and there was no fuss’, resonated with the Australia I lived in three years ago, but it feels unrecognisable today. Australia is a far more illiberal, mistrustful, censorious, suspicious and divided country in 2022 than it was at the beginning of the pandemic.

The declaration of the pandemic in 2020 was a gift for Australia’s putative ruling class, whose instinct for controlling the lives of lesser human beings had already been evident for years prior. Our leaders declared a state of emergency and rallied us around a common enemy to claim extraordinary, extra-democratic powers. The use of those powers has become ever-more illiberal, even as the threat from Covid has receded.

The legitimacy of such illiberal regimes depended, at least in the early days, on maintaining a heightened level of fear that could justify the abandonment of normal civic processes. Australia’s leaders have done this with aplomb, enthusiastically assisted by the media, using questionable modelling and medical advice to legitimise the illegitimate and normalise the unthinkable.

The careless abandonment of liberal-democratic principles in Australia during the Covid-19 pandemic has become notorious. At one end, some abuses are merely foolish and silly, like the warning from a South Australian health officer to Aussie-rules football fans to avoid touching a ball that strays into the stands. At the other end, they have been sinister, notably in the state of Victoria, which has adopted many of the trappings of a police state, backed with intrusive surveillance and intimidation.

One hopes the images that flashed around the world in September 2021, of Melbourne police locked in military formation, firing plastic projectiles indiscriminately at peaceful protesters, represent the lowest point to which Australian civil society can fall and that this will not be superseded by something worse in 2022.

Melbourne is the most locked-down city in the world, having had restrictions in place for 262 days in total, putting it comfortably ahead of second-place Buenos Aires (245 days). Melbourne was the first city in Australia to introduce a nighttime curfew, which was imposed for long stretches in both 2020 and 2021. It was relentlessly enforced by police, who monitored social-media posts for signs of rule-breaking and arrested offenders.

Victoria’s restrictions have taken a devastating toll on small businesses, mental health and trust in the authorities, yet the state’s Labor premier, Dan Andrews, remains not just the darling of the laptop class, but also a popular leader who would win an election comfortably if one were held tomorrow. The same goes for other lockdown leaders, notably the premier of Western Australia, Mark McGowan, who won 53 out of 59 seats in the state parliament for Labor in the election in March 2021.

The vaccine rollout has also gone hand in hand with coercive measures. Rules vary from state to state, but everywhere vaccines are more or less mandatory – unless one is prepared to live a miserable life, barred from shops, restaurants, churches and, in some cases, employment. Like some benighted republic trapped behind the old Iron Curtain, Australia has become a country where one is required to produce one’s papers in the course of everyday life, albeit on the screen of a mobile phone. For much of the pandemic, citizens have required government approval to enter or leave the country, and even permits for internal travel from some states to others. Should you cross certain state borders without the relevant authority, you are liable to be arrested on arrival and detained in a quarantine hotel for 14 days at your own expense, with no remission granted for a negative Covid test. The rules are ruthlessly applied, as Liberal senator Alex Antic discovered at the end of last year, when he flew back to his home state of South Australia after a sitting period in federal parliament in Canberra, only to be frog-marched on to a bus for a fortnight in a down-at-heel hotel.

Teachers, doctors, nurses, ambulance drivers and other public servants have been dismissed from their jobs for exercising their right not to be jabbed. They have been spared no sympathy in the mainstream media, which refer to this underclass of the unvaccinated in disparaging terms. In New South Wales, there have been calls to oblige refuseniks to pay the full cost of hospital treatment. This campaign has received fulsome support on talk radio and social media, notably from the Twittering laptop class.

Readers outside Australia might recognise some of these ugly elements in their own countries, since the authoritarian instinct has been awakened to some extent in practically every jurisdiction in the world. It is hard to identify another liberal democracy, however, that has been as careless as Australia in abandoning cherished principles of liberty and individual sovereignty in the pursuit of public health.

Australians have spent much of their history fighting for freedom abroad, but never at home. They occupy one of the two continents never to have experienced a civil war, the other being Antarctica. The Enlightenment notion of liberty has been embedded in Australia from the beginning of European settlement and has never been seriously contested. In his 2013 book, How We Invented Freedom and Why It Matters, Daniel Hannan eulogised that Australia represented ‘Mill’s libertarian philosophy made flesh’. He might be forced to revise that description now, or at the very least account for Australia’s two-year experiment in authoritarianism.

One explanation for our current woes lies in the arrival of a clique that DH Lawrence observed was conspicuous by its absence in Australia in the aftermath of the First World War: a ruling class that makes decisions for the rest of society. ‘In Australia, nobody is supposed to rule, and nobody does rule’, he wrote in 1923. ‘The instinct of the place was absolutely and flatly democratic, à terre democratic. Demos here was his own master, undisputed.’

But under Covid-19, a self-appointed nomenklatura elite has infiltrated areas of our private lives we once imagined sacrosanct. These elites have robbed the Australian people of dignity, denied them agency and demanded complete obedience. Where they might have drawn on Australians’ abundant reserves of good will and on voluntary compliance, they have instead resorted to central planning and coercion. As a result, Australia has moved closer to the dystopia that Friedrich Hayek warned us about in The Road to Serfdom.

The ascension of the laptop class was in the wind long before computing power became portable, and long before the emergence of Covid-19. We have observed this group flexing its muscles for three decades or more, growing in strength as it seized control of institutions and developed ingenious ways of bypassing democracy and the rule and law.

We have watched these elites grow ever-more condescending of lesser mortals and ever-more certain of the efficacy of their own designs. Their disdain for the established liberal order has increased, and their confidence that they could knock it down and create something better has become firmer, despite the failure and expense of their experiments.

The manner with which they have accrued power during the pandemic was outlined with precision more than a quarter of a century ago by Thomas Sowell in his masterpiece, The Vision of the Anointed. First come the assertions of a great danger to the whole of society, then the urgent calls to action to avert impending catastrophe. Government is called on to drastically curtail the dangerous behaviour of the many, in response to the prescient conclusions of the few. Arguments to the contrary are dismissed as either uninformed, irresponsible or motivated by unworthy purposes.

I can offer no better explanation for Australia’s extraordinary departure from the state of equanimity that made it such an attractive country in which to settle when I emigrated from Britain in 1989. And while I still have faith in the checks and balances that come with the dispersal of power in a sophisticated liberal democracy, we can no longer be confident of an inexorable growth in freedom, justice and prosperity that once seemed part of the natural order in this exceptional country, populated by enterprising, fiercely egalitarian people attached to the idea of everyone getting ‘fair go’. These days, that vernacular expression of geniality, attachment and casual optimism – ‘no worries’ – falls less easily from Australian lips.