The culture war against Kyle Rittenhouse

The media’s coverage of the Rittenhouse shootings has been disgracefully biased and dishonest. 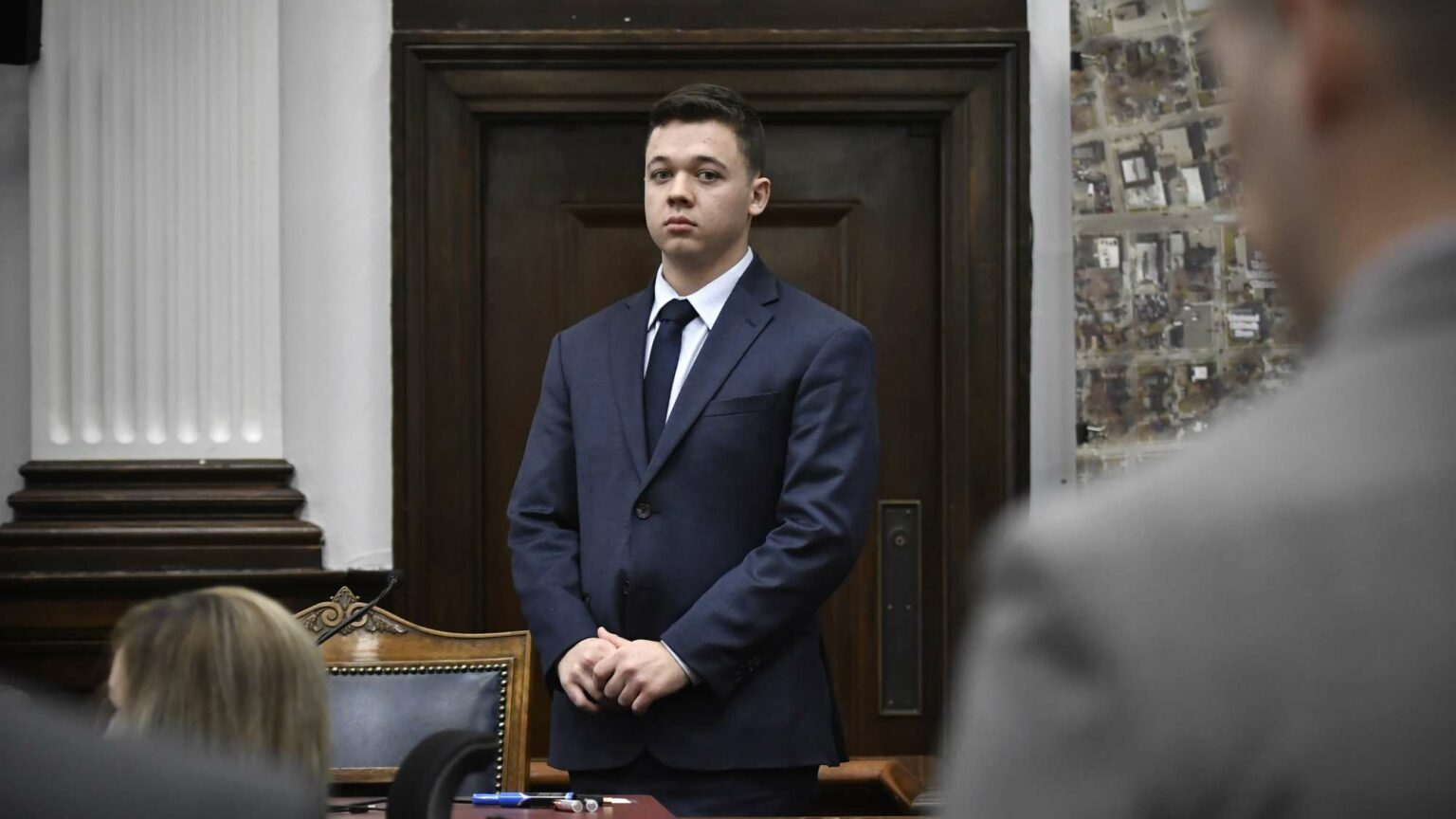 Officially, it’s Kyle Rittenhouse who’s on trial in Kenosha County Courthouse. But to some of us it looks like the mainstream media are in the dock, too. We await the jury’s decision on whether Rittenhouse is guilty or not guilty of homicide. But we already have a pretty good sense of the culpability of the media in fashioning an almost entirely skewed narrative around the Rittenhouse shootings. The more the trial has dug into the events of that fateful day of 25 August 2020, when a 17-year-old Rittenhouse fatally shot two men and injured another, the more we have seen just how cynical, partisan and outright deceptive so much of the media coverage of this tragic affair has been. There’s no doubting it: the media are guilty of pursuing a culture war against Mr Rittenhouse and against what he is seen to represent – problematic white men.

Growing numbers of people, even some people on what passes for the left today, are watching the Rittenhouse trial and saying to themselves: ‘I didn’t know these facts…’ A writer for the Chicago Sun-Times sums up this startled mood. Despite being someone who has ‘made no secret of his predisposition against Rittenhouse and those of his ilk who would hold him up as some sort of hero’, the writer now thinks, having watched the trial, having witnessed the marshalling of information that much of the media studiously ignored or downplayed over the past 15 months, that it would be ‘shocking if [Rittenhouse] is convicted of anything more than a weapons charge’. Or as one tweeter more pithily summed it up, after learning via the trial that Rittenhouse has many relatives in Kenosha and did not just travel there for fun or to kill people, ‘Was this reported ANYWHERE before the trial?’.

Before the trial. Let’s go back there for a moment. Before the lawyers in Kenosha County Court did what lawyers are meant to do – that is, explore an allegedly criminal incident from all angles to establish who, if anyone, was in the wrong – the liberal media weaved a simple, highly moralistic tale around the Rittenhouse shootings. In August 2020, Kenosha in Wisconsin found itself battered by sustained rioting and mob violence. Following the police shooting of a black Kenosha resident named Jacob Blake – who had a knife and had fought with officers prior to being shot – Black Lives Matter-style unrest exploded. Businesses were burned down, shopfronts were smashed with baseball bats, and widespread looting occurred. It is estimated that the three nights of devastating riots caused $50million worth of damage.

Into this mayhem came a young man from Antioch in Illinois, around 20 miles from Kenosha. Rittenhouse offered to help protect a used-car business. He was armed with a rifle. But something went terribly wrong and before long this 17-year-old – now 18 – had fired his rifle at three people, killing two and injuring the third. The media elites’ characterisation of this bloody incident was swift and ferocious. Rittenhouse was a white-supremacist type, they suggested, who had ‘crossed state lines’ – possibly the most widely used phrase in relation to the Rittenhouse affair – in order to rain hell upon people who were merely protesting in defence of black people. This almost cartoonish view of a youth’s embroilment in a messy, violent incident was most clearly expressed by Democratic representative and ‘Squad’ member Ayanna Pressley, who tweeted on 27 August 2020: ‘A 17-year-old white supremacist domestic terrorist drove across state lines, armed with an AR-15. He shot and killed 2 people who had assembled to affirm the value, dignity, and worth of Black lives.’ That was retweeted close to 100,000 times.

Virtually all of this narrative has now unravelled. The Rittenhouse monster created by media and political elites desperate for Bad White Men they might rage against has proven to be a myth. The ‘white supremacist’ storyline was ridiculous from the very start, given the three men shot by Rittenhouse were all white. No evidence has emerged suggesting Rittenhouse harbours white-supremacist views. As to his being a ‘domestic terrorist’ – Ms Pressley might need to lawyer up as much as Mr Rittenhouse had to. And of course the depiction of the gatherings in Kenosha as mere assemblies designed to express sympathy and concern for ‘black lives’ is a grotesque fantasy. These were riotous, looting mobs, whose baseball bats, petrol cans and guns caused as much harm to black businesses and black lives as they did to other folk in Kenosha. The idea that white boy Rittenhouse violently invaded a modern version of the 1963 march for jobs and freedom was always a delusion of the most wretched kind.

The trial has made it clear that many of the other claims made by the woke set about the Kenosha shootings were hollow, too. The depiction of Rittenhouse as a marauding gunman, a state-lines-crossing bloodthirsty killer, has not stacked up in the slightest. As even Reuters reports, in its seemingly startled breakdown of what we now know about the events of 25 August 2020, Rittenhouse started the day cleaning graffiti off a school that the mob had defaced. He then joined other armed men to guard the used-car dealership. Later he found himself being chased by Joseph Rosenbaum into a used-car lot. Rittenhouse cried ‘Friendly, friendly, friendly!’, and yet Rosenbaum threw a bag at Rittenhouse and seemingly reached for Rittenhouse’s gun. Rittenhouse pulled the trigger and Rosenbaum was killed. Rittenhouse was then chased by a ‘growing crowd’, some of whom were yelling ‘Get him!’. He fell to the ground and was hit by a man wielding a skateboard. Rittenhouse fired at that man – Anthony Huber – and killed him. A man holding a handgun – Caige Grosskreutz – was part of the ‘growing crowd’ advancing towards Rittenhouse. Rittenhouse shot him and injured him. At 1.30am, Rittenhouse, accompanied by his mother, turned himself in to the police in his hometown of Antioch.

As I say, it is entirely down to the jury to rule on whether Rittenhouse’s actions amounted to homicide or to self-defence. But the rest of us can observe – and be horrified by – the chasm-sized disparity between how these events were discussed in much of the media and how they played out in the real world. Indeed, even some journalists have started to do this. As one headline puts it, ‘Journalists grapple with misconceptions about Rittenhouse narrative as trial unfolds’. Ana Kasparian of the liberal media outlet, The Young Turks, admits that she now feels the need to ‘correct the record’ on the Rittenhouse affair. She had been ‘under the assumption’ that it was Rittenhouse who had chased Rosenbaum, and now realises it was the other way round. Glenn Greenwald has referred to an individual who is ‘highly educated and reasonably perceptive’ who has only just learned that ‘the Kyle Rittenhouse victims were white’. Myth has crashed into reality, and even many of the woke have been forced to take stock, to engage in some self-reflection.

One of the most insidious ways in which these complicated, tragic events were casually transformed into simple and monstrous acts of white-supremacist hatred was through the ceaseless repetition of the mantra ‘He crossed state lines’. The image implanted in the minds of even the ‘reasonably perceptive’ was of a young man who had set out to cause harm; who had purposefully, wilfully travelled to a different state in order to do something bad. Yet it has now become clear that Rittenhouse has deep links with Kenosha. His father, his grandmother, his aunt and his uncle live there. He was not the state outsider so much of the media and people like Ayanna Pressley presented him as. Maybe it will still be found that what he did was wrong. But many people will think it is not entirely unreasonable for an individual to wish to protect from mob violence a community that includes some of his own closest loved ones.

How did this happen? Why did many in the media leave out, or downplay, key facts of the Rittenhouse affair? Why was there so little curiosity about the reality of Rittenhouse’s life, and such a rush to hold him up as symbolic of white rot, of the general horribleness of ‘whiteness’? It’s because identitarianism has warped contemporary journalism. Too many journalists these days see themselves as crusaders for wokeness, as enforcers of correct thought, rather than as pursuers of the truth, wherever it might lead them. Newsrooms overrun by observers who have bought into the hyper-racial narratives of ‘white privilege’, black victimhood, 1619 and all the rest of it have become less and less adept at coolly analysing real-world events and objectively weighing up what happened. It’s a woke inversion of the racism of old. In the past, too many of the great and the good viewed black defendants in criminal cases not as individuals who were innocent until proven guilty, but as representatives of their race, as foul embodiments of the allegedly lowly behaviour of entire communities. The same happens today, only now it is very often white men who are presumed to personify race-based hateful vices. These poisonous ‘privileged’ creatures are viewed as guilty almost by definition.

And it’s still happening with Rittenhouse. Not everyone is reflecting on what they got wrong. No, some are digging down. So Vox has described Rittenhouse’s sobbing in court as a ‘tried-and-true strategy for white men in trouble’. Apparently Rittenhouse was ‘appeal[ing] with his tears’ to ‘certain white members of the American public’. Or maybe he was just crying? A writer for the Guardian insisted that such ‘public displays of white male emotionalism’ are really a ‘political tool’. She suggests Rittenhouse’s weeping was not for the tragic events but rather was an expression of ‘the indignant entitlement of a white man thwarted in the enforcement of his own privilege’. So, to many Rittenhouse is still a white monster, still a racial beast. As surely as yesterday’s racists viewed accused black people as morally alien creatures, so the woke set sees everything Rittenhouse says and does as a manifestation of his ‘whiteness’. And this is progress?

I trust juries, and it falls to the jury in Kenosha to give its verdict on the events of last year. But it strikes me as genuinely despicable that the woke elites who effectively gave a green-light to the BLM mayhem of 2020 are now demonising and scapegoating a young man who found himself caught up in that mayhem. These people essentially stirred up the riotous violence of the post-George Floyd, post-Jacob Blake moments. It’s not rioting, it’s protesting, they said. Looting isn’t always bad, some insisted. The police should back off and let the mob have its say, they effectively demanded. They cynically believed that this city-consuming violence in various parts of the United States would assist them in their efforts to dislodge Trump and help to bring in a new, more woke era. And now they rage against a teenager who came face to face with the chaos that they nodded through? These people are not only estranged from the truth – they’re also estranged from basic morality.

Meghan’s victory is a disaster for press freedom