Environmentalism is class war by other means

Scenes of furious motorists clashing with eco-snobs make it all crystal clear. 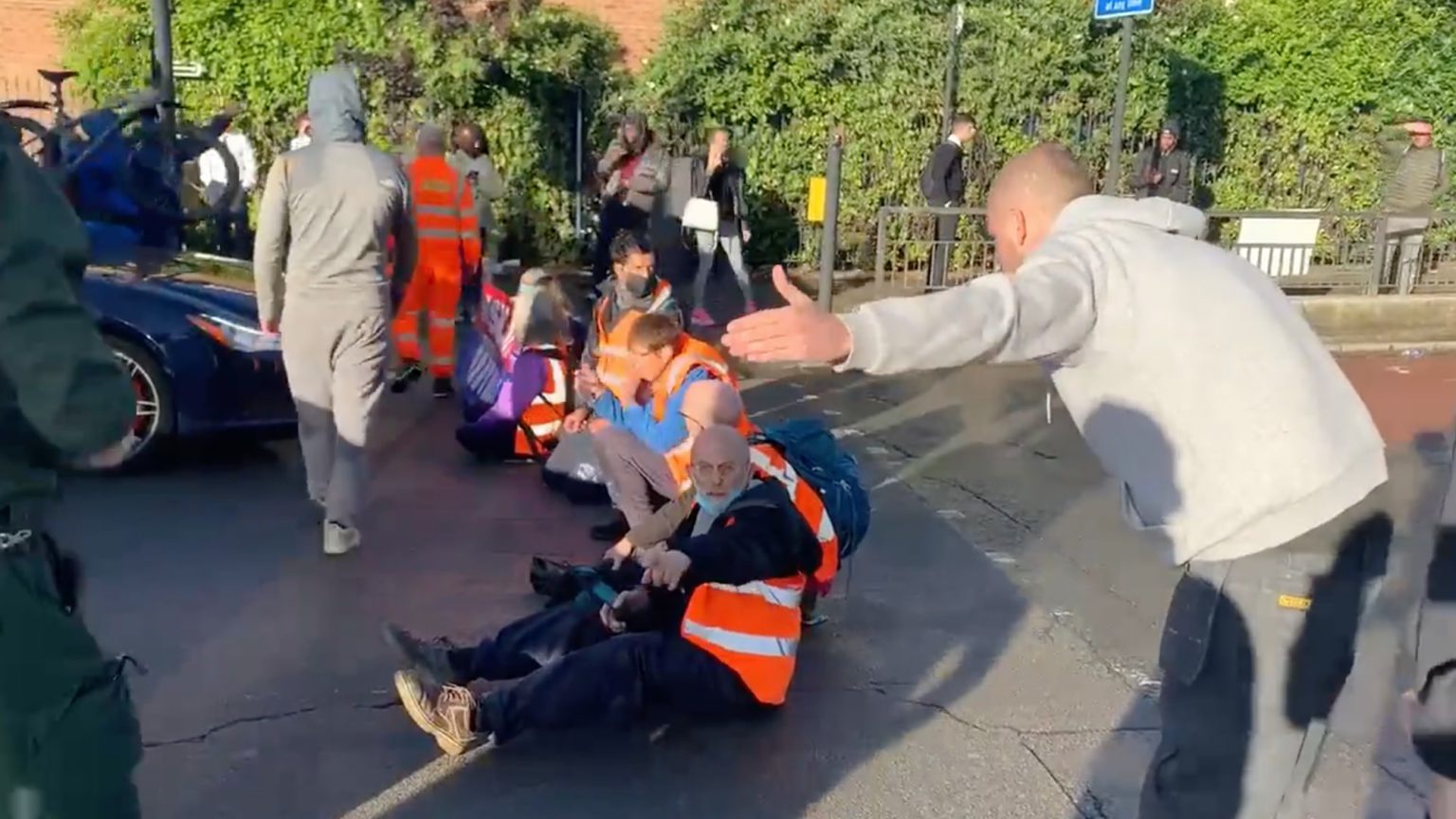 Modern politics starts to make a lot more sense when you realise that a lot of the mad movements that have sprung up of late are just waging a class war by other means. The woke middle classes demonise working-class people as unreconstructed bigots, Remoaners rail against the ‘uneducated’ throng, and bourgeois environmentalists block roads in an attempt to make the lives of the drivers they’re blocking tougher and more expensive.

Every so often the mask slips and the class dynamics become crystal clear. That’s precisely what happened earlier today on Wandsworth Bridge in London. Members of Insulate Britain, the Extinction Rebellion offshoot now 11 days into its road-blocking campaign for double-glazing, were filmed being dragged out of the road by enraged working-class men who did what the authorities couldn’t and cleared the road of these Home Counties irritants.

‘It’s a fucking ambulance, you stupid prick, get out the road’, one furious motorist shouted, in one of the viral clips of the clash, as he and others dragged protesters out of the path of said ambulance. It perfectly summed up the mix of fury and bemusement with which most people look upon Insulate Britain. By the Blackwall Tunnel, which IB was also blocking, a woman was filmed begging the protesters to let her through so she could get to her sick mother in hospital, slamming the assorted crusties for their selfishness.

That IB, XR or whatever this lot will call themselves next week, are dominated by middle-class people isn’t a slur — it’s an empirical fact. Last year, academics from the University of Exeter, Keele University and Aston University published research showing that XR activists are overwhelmingly middle-class, highly educated and southern. A whopping 85 per cent of them have degrees. (Incidentally, going on the snaps of those arrested in recent days, a surprisingly large proportion of them appear to be vicars.)

Those scuffles on the roads have beautifully illustrated what has been clear for some time: that eco-activism is essentially comfortably off middle-class people agitating to make ordinary people’s lives worse. Their mission flows from their tactics. They block a road and a load of people’s days are ruined. Meanwhile, the protesters’ overriding goal, spelled out in their leading lights’ public statements, is to bring about a society in which cars, flights and ‘non-essential consumption’ are banned.

Time and again the tactics of XR et al reveal their class prejudice. Their activities almost always involve disrupting the lives of working-class people, whether they’re blocking roads or occupying meat markets, and putting them out of pocket. And so the strongest pushback against them has come from working-class people themselves, from the Battle of Canning Town in 2019 to the Battle of Wandsworth Bridge earlier today.

Plus, the seemingly never-ending stories of green hypocrisy make clear that eco-austerity is only really for the plebs. The more that energy and travel are made more expensive, in an attempt to stem our movement and consumption, the more the good things in life will become the sole preserve of the wealthy, who will always be able to pay more, or find some moral justification for their flight to South America, or just write a big cheque to ‘offset’ their carbon.

One problem here is that the lunacy of Insulate Britain, Extinction Rebellion and their celebrity backers risks covering up how mainstream environmentalist thinking has become. While XR wants zero emissions by 2025, our Tory government is committed to Net Zero by 2050 – a goal which, given how expensive and unreliable renewables are, will come at a huge cost that will be borne disproportionately by working-class people.

Every time those idiots glue themselves to the M25, they offer the government a convenient punching bag. Meanwhile, Boris Johnson continues merrily down the road of eco-austerity, presiding over soaring energy prices while his ministers are asked if there will be blackouts this winter. For all its railing against the government, Insulate Britain is the best friend Boris Johnson ever had. And for all its fist-shaking at mad green activists, this supposed ‘People’s Government’ is firmly on the wrong side of the climate class war.