Forget the ‘glow up’ and the stilted expressions of regret – Shamima is a traitor and should be judged as such. 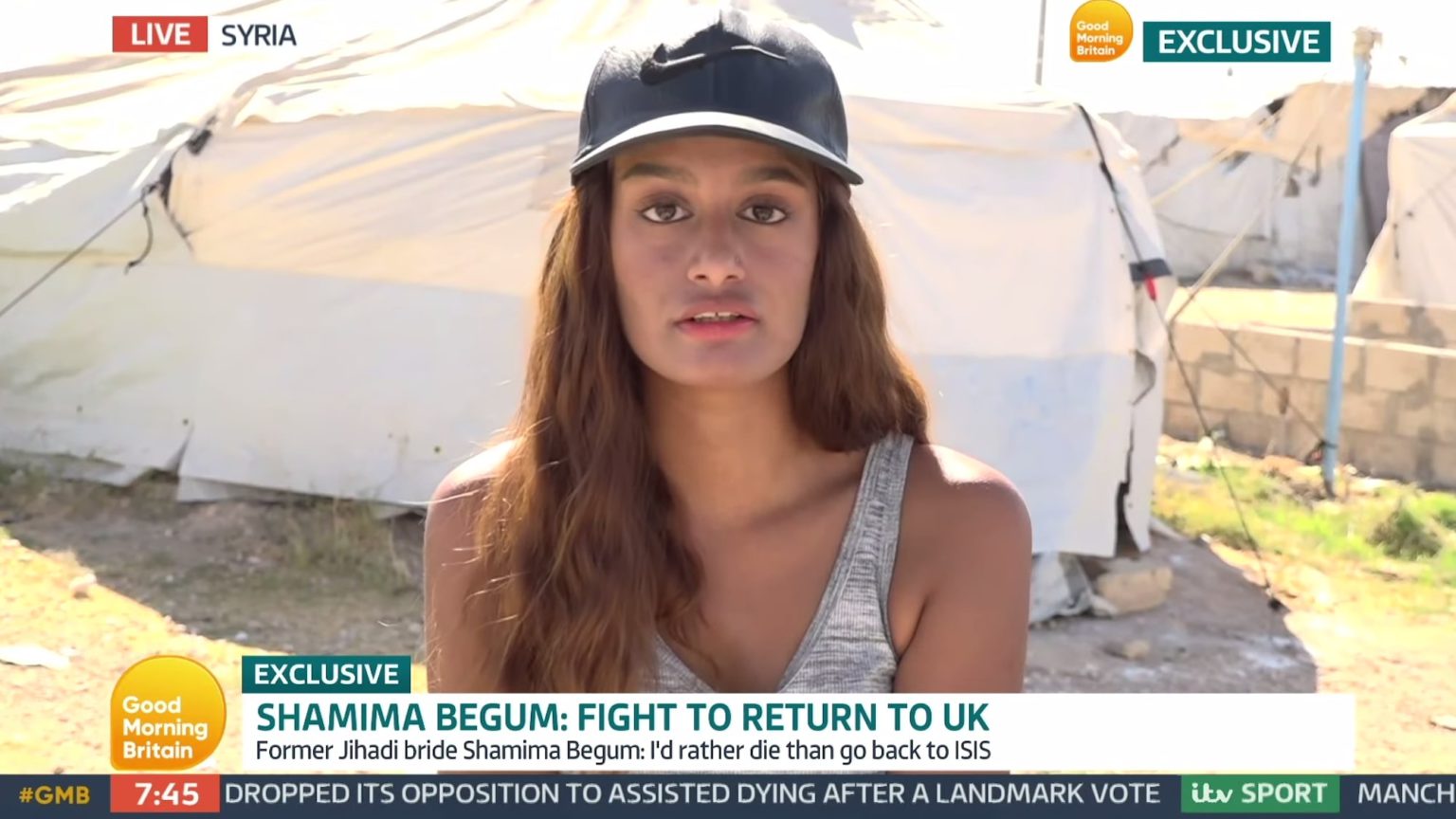 Where’s the outrage over a mainstream broadcaster giving a platform to a former follower of a fascistic death cult? That happened today, on Good Morning Britain, when Susanna Reid and Richard Madeley had an early morning chat with Shamima Begum, the young British woman who ran off to join ISIS in 2015 and who stayed with it as it enslaved Yazidi women, slaughtered Christians, executed homosexuals and instigated acts of barbarism against men, women and children in Paris, Barcelona, Manchester and elsewhere in Europe. The No Platform lobby has been strangely silent. No writing to Ofcom, no Twitterstorm, no cries of ‘How dare you give this vile supremacist the oxygen of publicity!?’. An actual one-time extremist hits our TV screens and it’s tumbleweed from the self-styled protectors of the public from the toxins of dangerous ideologies.

This is odd, to say the least, because these people normally never pipe down about ‘bad’ people being ‘platformed’. Sunetra Gupta only has to utter the words ‘Good morning’ during an appearance on the Today programme and instantly an online mob forms, chastising the Beeb for giving airtime to the woman who was wrong about the IFR of Covid. If a climate-change sceptic wonders out loud if we might, in fact, have a little more than 10 years to save the planet, there will be ceaseless online petitioning demanding that his foul views never be allowed to sully the airwaves again. As for feminists who think only men have penises – apparently having these heretics, these witches, on TV is tantamount to genocide against trans people. Cast them out.

And yet here was Ms Begum, who a few years ago devoted herself to the most extremist, hateful, intolerant movement on Earth, a movement for which the term ‘fascistic’ is not inappropriate, chatting away on morning TV and there wasn’t a peep of protest from the woke. In fact there were expressions of sympathy. ‘We don’t have to like Begum or her cynical glow-up, but we must try to understand her’, said the headline to a column by a leftish writer for the Evening Standard. Imagine if a right-wing newspaper published a piece like that about a former Neo-Nazi. ‘We don’t have to like this skinhead who loathes black people and Jews, but we should try to understand him.’ Just picture the furore.

This double standard needs an explanation. Now, it is spiked’s view that none of these people should be censored. From the reasonable, like criticism of lockdown or opposition to the transgender ideology, to the nutty, like Holocaust denial or Islamo-intolerance, all ideas should enjoy the oxygen of public life. Let us make up our own minds about what is reasonable and what is hateful. But how have we arrived at a situation where the woke will rage like mad against women who think you can’t be a lesbian if you have a penis, while looking more charitably on a woman who joined a supremacist movement that would crucify lesbians given half a chance? This is the twistedness of identity politics in action. The Shamima affair – the bizarre media effort to rehabilitate this traitor – perfectly sums up just how warped the identitarian ideology has become.

The ‘glow up’ referred to in that creepy Standard piece is Shamima’s latest makeover. The black chador is gone and now Ms Begum is sporting a Nike cap, flowing brown locks and painted nails. ‘From Islam to glam’, as a tabloid headline might put it. What’s next – a stint on Love Island? Surely it won’t be long before there’s a podcast chat with Novara Media. If Shamima were to return to the UK there would unquestionably be more media splashes, maybe a book deal, definitely tear-stained Guardian articles about this bright East London student who was ‘groomed’ by male fanatics. And anyone who says ‘You what?’ will instantly be denounced as gammon lowlife. I can envision a situation where it won’t be Shamima who’s No Platformed, but her critics.

A process of rehabilitation is clearly taking place. I don’t know who’s advising Shamima, but they’re doing a good job. The clothing choices, the waving around of the painted nails, the criticisms of Boris (‘You clearly don’t know what you’re doing’ in relation to terrorism, Shamima said of the PM on GMB) – it all seems expressly targeted at the Shamima-sympathising sections of the British chattering classes. At the kind of people who insist Shamima was ‘groomed’, that she is the real victim, that she must be brought back and offered help. At those folk who have shed more tears and bashed out more sympathetic tweets about Begum than they ever did about the Yazidi women who watched as their husbands were massacred by the movement Begum joined, before being forced on pain of death to work as maids or sex slaves for the people Begum threw her lot in with. It really isn’t commented on enough that the woke elites feel more emotional attachment to an ISIS adherent than they do to ISIS’s victims.

The attempt to transform Begum into a victim – of ISIS, of Islamophobia, of ‘gammon racism’ – has been one of the most extraordinary endeavours undertaken by the opinion-forming set in recent years. It has exposed the extent to which they have taken leave of morality and reason. In their world, you are far more likely to hear the word ‘grooming’ in relation to Begum than you are in relation to the hundreds of working-class girls across the country who were groomed, abused and raped by gangs of largely Pakistani heritage. This is identitarianism: victimhood is accorded to individuals depending on their skin colour and background rather than their experiences, and crimes are ignored if they are seen as harmful to the identitarian narrative and talked up if they are seen as beneficial to said narrative. So the grooming of working-class girls is treated as an inconvenience by the woke set, best ignored, while the alleged grooming of Begum is talked about endlessly because it boosts the view of Muslims as victims, as lacking in meaningful agency, as constantly requiring the sympathy and assistance of the 21st century’s self-styled managers of racial and cultural relations.

The moral rehabilitation of Shamima Begum, the attempt to turn her into a celebrity victim, speaks to the complete collapse of moral judgement in our strange, relativistic era. Hardly anyone can bring themselves to speak the truth – that Begum is a traitor. That she betrayed her nation, her community and her family. That her decision to join a movement that thought nothing of making slaves of women and exterminating girls whose only crime was to enjoy Ariana Grande’s pop music was not a ‘teenage mistake’ – like smoking or having sex before you’re ready – but rather spoke to an evil decision to abandon free, democratic life in the UK in preference for the fascistic lure of the barbaric Islamic State. It is the moral immaturity of the woke ideology that means it cannot grapple in a meaningful way with the categories of traitor, evil and enemy, and instead says: ‘Maybe she’s a victim? Maybe they all are?’

Let me come back, Shamima now says, cheered by her weird supporters in the British elites. They say this because they know pretty much nothing will happen to her in the UK. They know it will be very difficult to establish, in a British court, what Ms Begum did or didn’t do in Raqqa. So, if Begum and her backers are serious about her facing justice, why not let the Syrian Kurds put her on trial? They are far better placed to gather evidence of what she did, and to make her pay for her sick decision to join the most barbaric movement of modern times.