The betrayal of Afghanistan

What Western forces have done to the Afghan people is unforgivable. 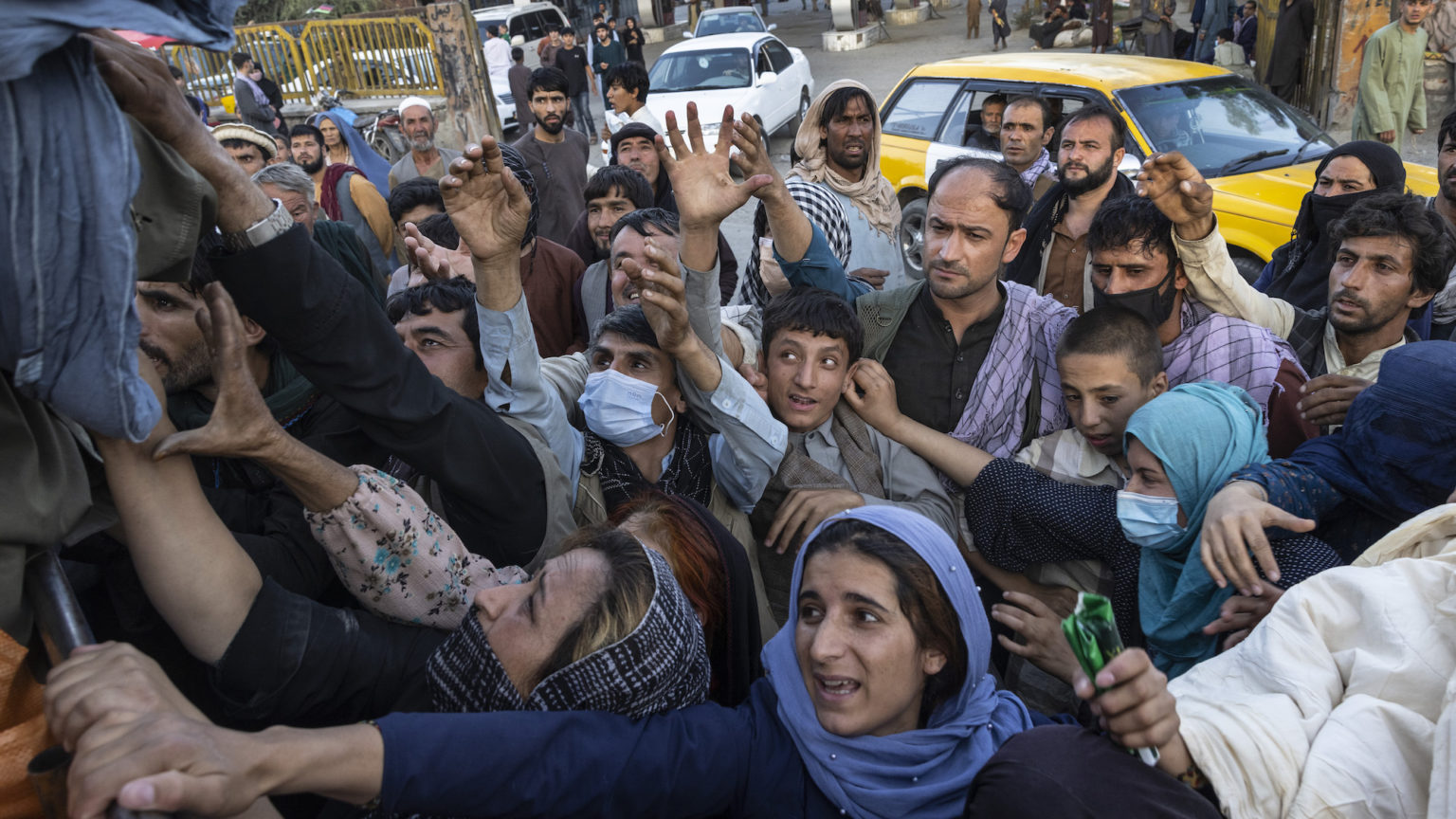 American imperialism has said and done many obscene things over the decades. And right up there is the response of the Biden administration to the Taliban’s surge following the staggered withdrawal of American and NATO forces. ‘They’ve got to fight for themselves’, President Biden said of the Afghan people. They must ‘fight for their nation’, he continued. There was a chastising tone to his comments. ‘Get your act together’, he was essentially saying. ‘Do something.’ It is difficult to fathom the levels of arrogance it must require to leave a country ruined, and effectively to pave the way for the barbarism now sweeping that nation, and then to turn around and tut-tut at the beleaguered people you left behind for not being prepared for the onslaught.

Make no mistake: at every step of the way American and NATO forces blindly and ruinously paved the way for what is currently happening in Afghanistan. The Western media are full of dire descriptions of what the Taliban is currently doing. The number of cities it has taken in extraordinarily short order. The cruelty of its armed forces. The dying prospects for women and girls – and any form of dissent – in a nation in which these intolerant Islamists will shortly be in charge. ‘Return to the Dark Ages’, as the front page of today’s Metro says, complete with an image of a bewildered young girl. What’s missing, however, is any meaningful analysis of how this has come about; how we have arrived at this dreadful situation in which the Taliban, talked up for months and months by Western observers as a partner to peace, could so readily and successfully return to war.

It’s because of the withdrawal, pro-interventionists argue. The calamity currently unfolding in Afghanistan is proof that the West was needed there and should have stayed, they say. We’ll come back to the withdrawal, and the problems with it, in a moment. But first it is essential to establish that it isn’t the absence of Western forces that facilitated the Taliban’s violent surge – it was their presence; it was what they did.

In two ways in particular Western forces helped to seal the fate currently strangling the life out of Afghanistan. First, by helping to institutionalise warlordism and tribal divisions and by effectively grating against any possibility of Afghanistan being a viable nation state (all conducted, of course, in the doublespeak name of ‘nation-building’). And secondly by promoting the delusion that the Taliban had become a peace-seeking force and a potential global partner of ‘the international community’. The former made Afghanistan a Potemkin state, a paper nation, easily overrun; the latter emboldened the Taliban and primed it for just such an overrunning, for making its move on a country hollowed out by the West’s ‘nation-builders’.

It is the swiftness of the Taliban’s conquest of vast swathes of Afghanistan that is most striking, and which tells us a story about this nation that the interventionists would rather ignore. In the space of a week, the Taliban has taken 10 provincial capitals, including Kunduz. It was estimated this week that the Taliban controlled 57 per cent of the districts of Afghanistan, while the Western-backed government in Kabul controls 16 per cent. The others are contested. US military officials predict the Taliban could isolate Kabul in 30 days and officially become the rulers of the country in 90. Over a thousand people have been killed in recent weeks and there is a huge amount of internal displacement, as civilians flee the north of the country in particular and head to the thus far Taliban-free zone of Kabul.

That this has happened as Western forces are finalising their withdrawal has boosted the self-flattering worldview of those laptop bombardiers who believe Western militaries are the saviours of brutalised peoples across the world. But there’s a far more important question, one that the narcissists of the interventionist lobby, consumed by visions of their own virtue rather than by serious analyses of the failures of intervention, seem incapable of asking. How did this happen so quickly? Why is Afghanistan so weak and its government and police forces so incapable? And why is the Taliban, relatively at least, so strong? It is what preceded the withdrawal that is key here.

Western intervention in Afghanistan was always a military venture in search of a justification. The invasion of 2001 was presented as a war on al-Qaeda, then being hosted by the Taliban government, for the apocalyptic barbarism it visited upon New York City and Washington, DC. As if the peasants of Tora Bora bore any responsibility for that act of terror. As if al-Qaeda was not in fact a global, borderless movement, supported more by well-educated Islamist identitarians in the West (like those who masterminded 9/11) than by the poverty-stricken people who bore the brunt of the West’s war in 2001. So even the initial act of intervention – driven by the delusion that the increasingly globalised misanthropy of radical Islamist networks could be tempered by targeting a so-called rogue state – was wholly misguided. When it became clear that global Islamist terrorism would not be held back by bombing Afghanistan – and in fact was worsening – the justification for the West’s presence there changed. It was a war to defend women’s rights. It was a war on drugs. It was about building a new nation.

‘Nation-building’ became the raison d’être for the Afghan venture. But in many ways, ‘nation-building’ was the opposite of what it claimed to be. What was being fashioned in Afghanistan was not a coherent state, far less one that enjoyed legitimacy in the eyes of the Afghan people, but rather a Potemkin nation, a walled-off government in Kabul that enjoyed the support of ‘the international community’ but little true loyalty among the Afghan people. Indeed, this Western-funded government masquerading as a nation state ended up contributing to the further corrosion and hollowing out of Afghan nationhood; to nation-deconstructing. As Anil Hira wrote for the Canadian Defence and Foreign Affairs Institute in 2009, when the failures of ‘nation-building’ were already clear, the ‘New Afghanistan’ was defined by its lack of definition, by the absence of a cohering strategy. The Afghan government and its various Western backers were a ‘loose and haphazard’ coalition, often ‘operating on different strategic premises and in different spheres of influence’.

‘Nation-building’ – the name given to the loose, conflictual networks that backed the guarded regime in Kabul – led to the further deterioration of Afghan nationhood. Elements in the Karzai government of the 2000s behaved essentially as warlords. They were responsible for ‘doling out aid’ and they often did so in such a way that they might ‘maintain separate and local spheres of influence’. That is, the central government, this Potemkin force, contributed to the inflammation of tribal separatism through the allocation of Western aid and funds to warlord forces that might be trusted to maintain a modicum of peace in the regions beyond Kabul. This meant, as Hira points out, that aid itself, the international community’s backing for ‘nation-building’, had ‘the ironic effect of helping to fund insurgencies and dissonance’. ‘Building a nation’ was the propaganda, violent dissonance the reality.

Alongside cultivating state weakness, Western forces also brought the Taliban in from the cold. In recent years they flattered the Taliban as a force for peace, a movement we could work with. The Taliban became a central player in the so-called peace process. It became a diplomatic partner of the US last year, with their jointly signed Agreement for Bringing Peace to Afghanistan. This wasn’t the first time the US deceived itself into believing the Taliban could be a normal, peaceful government. In the 1990s, when the Taliban seized power following the end of the Afghan-Soviet war, Washington believed for a period of time that there could be some ‘common interest’ between the US and the Taliban, especially in terms of restraining Iran and its regional ambitions. Amazingly, even subsequent events – 9/11, al-Qaeda and the war and aftermath of 2001 – do not seem to have fully disabused American and other Western observers of these delusions about the Taliban.

The West’s moral rehabilitation of the Taliban in recent years is another expression of the ‘hopeless optimism of trusting the Taliban’, as Nahal Toosi and Quint Forgey argue. Even now, as the Taliban violently sweeps to power, the West’s delusions persist. US secretary of state Antony Blinken comes off as a political naïf when he says he is shocked by the Taliban’s violent conquest because this seemed to be a movement that was seeking ‘international recognition [and] wants international support’. The Americans believed their own propaganda. ‘We thought the Taliban was a force for peace’, they say, as Taliban commanders give interviews to the BBC in which they make it clear that they still believe hand amputation is the correct punishment for theft, that adulterers should be stoned to death, and that no girl should receive an education.

Here is the truth: Western forces wrote the script for the current seizure of Afghanistan by the reactionary forces of Islamic extremism. They cultivated a failed state and they morally fortified a regressive army, and the result of this was as predictable as it has been awful – the regressive army swept through the failed state. Does this mean Western forces should have stayed; that the withdrawal was a mistake? No. The presence of the West was the problem. At the same time, however, the West’s cowardly abandonment of Afghanistan, its running away from a calamity it played the key role in creating, speaks to the moral as well as the strategic failings of 21st-century foreign policy. The rules of integrity surely demand that Western forces should have provided greater levels of protection for the people of Afghanistan before leaving; but it is too late for that now.

The West’s ending to its 20-year invasion of Afghanistan makes Chamberlain look like a skilful, principled negotiator in comparison. An intervention designed to end global terror and defeat the Taliban has ended with Islamist terrorism being as bad as it has ever been and the Taliban on the cusp of ruling Afghanistan once again. The interventionists said they would save the Afghan people – in truth they subjected them to decades of repression, war, misogyny and poverty. Who will answer for this?