Joe Biden and the crisis of the New World

The Biden-supporting woke elites pose a graver threat to the American republic than Trump did. 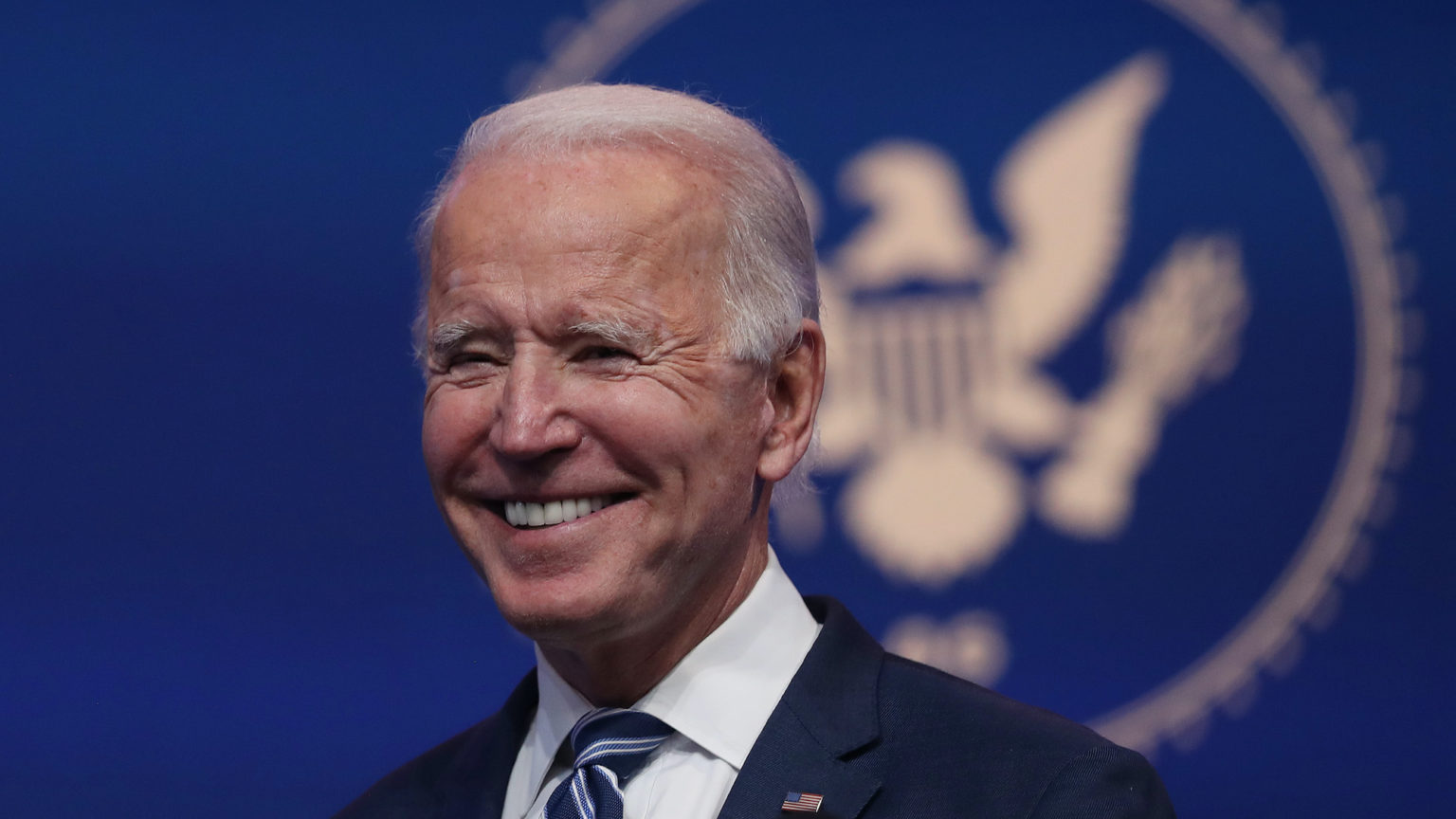 America is saved. The republic has been rescued. The healing of the nation can begin now that authoritarian populism has been defeated and ‘the adults’ are back in charge. That’s the narrative swirling around the inauguration of Joe Biden today. It couldn’t be more wrong. The Biden-supporting woke elites pose a graver threat to the American republic, to its visionary founding ideals, than Donald Trump did. Behind the facade of today’s restoration of normalcy, the New World trembles.

The hyperbole has been cranked up to 10 ahead of today’s inauguration. America is talked about as if it were a patient recovering from a bout of madness. Trump was the disease, Biden is the cure. A CNN anchor described the lights running alongside the reflecting pool at the National Mall in Washington, DC as ‘extensions of Joe Biden’s arms embracing America’. British Labour Party politician Lisa Nandy is giddily celebrating the fact that a ‘woke guy’ and an ‘amazingly strong woman of colour’ – cringe – are now in the White House, providing a ‘source of hope’ to the world. Praise be!

One of the most common cries of the vast pro-Biden lobby is that ‘the adults’ are back in charge. You can even buy a Biden-Harris t-shirt that says ‘The Adults Have Arrived’. ‘Here come the adults’, says the New Republic. It cheers the fact that Biden and his Cabinet are all ‘experienced and non-controversial’ (boring?), meaning they can help to restore American democracy and heal a confused, divided world.

This metaphor of the adults re-entering the room is a revealing one. The vote for Trump in 2016, like the vote for Brexit in the UK in the same year, is clearly viewed by the managerial elites as a temper tantrum, an explosion of rage among overgrown children. The ‘low-information’ electorate chose a ‘low-status’ president, and the consequence was mayhem. So now ‘the adults’ – the expert class, the well-educated coastal elites, those people who declare their pronouns and use all the correct racial terminology – must reassert their rightful authority. This vision of children being reprimanded by Biden, Harris and the rest speaks to an incredibly disdainful view of democracy when the result doesn’t go ‘our way’.

All the talk of healing and restoration and a return to adulthood gives the impression of Joe Biden defeating Donald Trump in a grand battle to preserve the soul of America. The truth is very different. Trump was unquestionably an oafish president, knowingly unpresidential, cavalier about the constitution, unmoved by the founding American principle of freedom of speech, and given to outbursts of destructive behaviour and policymaking that did little to assist the working classes who voted for him but much to trash the standing of America.

And yet for all of Joe Biden’s experience, for all his celebrated diplomacy, for all his distinctly post-Trump presidential style, he – and more importantly the elites who secured and support his presidency – threatens to unravel the values and virtues of the American republic far more than Trump did.

There’s an elephant in the room in all discussions of the US right now: last year’s rioting. Anyone who raises it is accused of whataboutery, of trying to deflect attention from the despicable, anti-democratic storming of the Capitol by a pro-Trump mob on 6 January. But it is important, crucial, in fact, to reflect on the disturbing events of 2020. Not simply to reiterate how violent they were or to point out that they caused more destruction and loss of life than the mob at the Capitol did, but also to draw out what they represented; what ideas they gave violent expression to; what they revealed to us about the liberal elites who, as of today, are in charge of America.

That rioting, those weeks and weeks of violent destruction, represented a fusion of the politics of the elites with the resentments of certain sections of society. The trigger for the mayhem may have been the murder of George Floyd by cops in Minneapolis, but the fuel was the bourgeois sense of exhaustion with the entire idea of America. The street violence swiftly morphed from anger over a police killing into sustained violent expressions of contempt for the ideals and the very founding of the American republic. That is why the rioting and the cultural elite’s apologism for it are important: because they confirmed that there has been a corrosion of belief in the American project across various sections of American society, including at the very top of it.

Of course, ever since the United States was founded in 1776, there have been tensions and failures and conflict. At times the American project proved wanting; the New World appeared hollow, an exercise in rhetoric rather than real, tangible political equality. And yet 2020 was different. The past couple of years have been different. For what we have witnessed in our time is not simply expressions of frustration with the slow or partial realisation of American values, but a wholesale questioning of the entire point of America; an intellectual crusade, no less, to overturn our understanding of when America was founded and what it was founded to do.

Consider the project launched by the New York Times, the bible of the liberal elites, to reimagine the founding date of America as 1619 rather than 1776. That is, this country was born when slaves arrived, not when revolutionaries drew up the Declaration of Independence. It was founded in sin, not virtue. It was founded in the horrors of the Old World (exploitation, slavery, tyranny), not the values of the new one (reason, freedom, democracy). This republic-undermining project has had an extraordinary influence on the cultural consciousness and in the education system, too. And it helped to fuel last year’s rioting: witness how protesters daubed ‘1619’ on the toppled statues of America’s founders and heroes.

The reimagining of America as a continuation of the Old World rather than the first cry of the New World has been gathering pace in academia, the media and the cultural sphere. It is now common to depict America as a nation indelibly stained by the experiences of slavery and racism. It was founded to secure the slave-owning rights of the colonists, we’re told. Its later Civil War was not really an effort to end slavery but rather to discover new ways to repress and exploit African-Americans. Even the Thirteenth Amendment that ended slavery in the US is now seen as little more than an underhand effort to enslave black people in new ways via the prison system. This revisionism comes courtesy of a film distributed by that citadel of the woke elites, Netflix.

America’s founders are reimagined as mere slave-owners, racists posing as revolutionaries. Buildings that bear their names are renamed. In last year’s rioting, statues of George Washington were toppled. Abraham Lincoln, too. The expansion of the values of the American republic by Martin Luther King and others is continually undermined by the new elites’ rehabilitation of racial thinking. Their myopic identitarianism, their obsession with ‘white privilege’, their introduction of critical race theory into workplaces and places of education – all of this unravels the promise of equality contained in the founding of America, threatening to replace the New World’s cry of ‘all men are created equal’ with the woke elite’s insistence on organising people according to their racial identity and their placing in the charts of privileged / oppressed.

The founding rights of the American republic have taken a beating too. They have always disapproved of the Second Amendment, of course. Now they have sullied the Thirteenth Amendment. Next they will come for the First, the world’s clearest guarantor of freedom of speech and freedom of the press.

The claim that dangerous disinformation exploded during the Trump era will be used to roll back America’s founding principle of free expression. Alexandria Ocasio-Cortez has already won plaudits for her insistence that the media must be restrained. Lawmakers must ‘figure out how we rein in our media environment so that you can’t just spew disinformation and misinformation’, she said. That, of course, would be a blatant violation of the First Amendment’s provision that congress shall make no law ‘abridging the freedom of speech, or of the press’.

Meanwhile, comic Sarah Silverman says the First Amendment will need to be ‘amended’ post-Trump in order to ensure that dangerous ideas are not given free expression. Imagine if Trump had talked about ‘amending’ the First Amendment. There would have been uproar. But among those who share the new elite consensus opinion that says America’s very foundation is questionable and its constitutional guarantee of liberty is dangerous, it is apparently fine to fantasise about tearing up the Bill of Rights.

Washington torn down, 1776 erased, the First Amendment problematised, the Civil War misrepresented, the New World ideal of equality trashed by new forms of rigid racial thinking… and still the woke elites have the nerve to claim that it is Trumpists who threaten to bring down America. The truth is that it is the supposedly ‘liberal’ establishment that now openly preaches loss of faith in the American project and whose political excesses risk undermining the breakthroughs in liberty and equality that America gave to the world. From their neo-racialism to their cancel culture, their depressive historical revisionism to their growing preference for technocracy over democracy, it is the anti-Trump elites whose ideologies chip away at the foundation stones of the American republic.

This isn’t to say Trump is without guilt in this process. On the contrary, he played an important role in intensifying the elite turn against the ideals of the New World. By launching rhetorical crusades against woke excesses without creating the institutional or intellectual apparatus for preserving and celebrating American virtues, Trump helped to make things worse. He enraged the cultural elites and provoked them to ever-more illiberal assaults on freedom of speech and historical memory while failing to create the organisational structures that might have withstood such assaults. Trump was an instrument too blunt to be able to hold back the new crusade against the American project.

The birth of America was a unique event in human history. This was the first nation founded in the values of freedom and equality. It was referred to as the New World because it was the New World. Hannah Arendt wrote that ‘the authority of the [American] republic will be safe as long as the act itself, the beginning as such, is remembered as the promise it holds out’. But that act, that beginning, is no longer remembered for its promise, but rather is misremembered as a cynical exercise in the preservation of Old World power.

And so the ‘authority of the republic’ is no longer secure. Not because of the rupture of the Trump years, but because of the moral and political exhaustion of the elites who are replacing Trump. Biden is part of these elites; he speaks their language; he wallows in wokeness, obsesses over racial categorisation, and bristles at the ideal of freedom of speech. Anyone who thinks today’s inauguration represents the restoration of the American ideal is kidding themselves. In many ways it represents the opposite.