It is a journalist’s duty to question lockdown

Much of the press is all too happy to toe the government line. 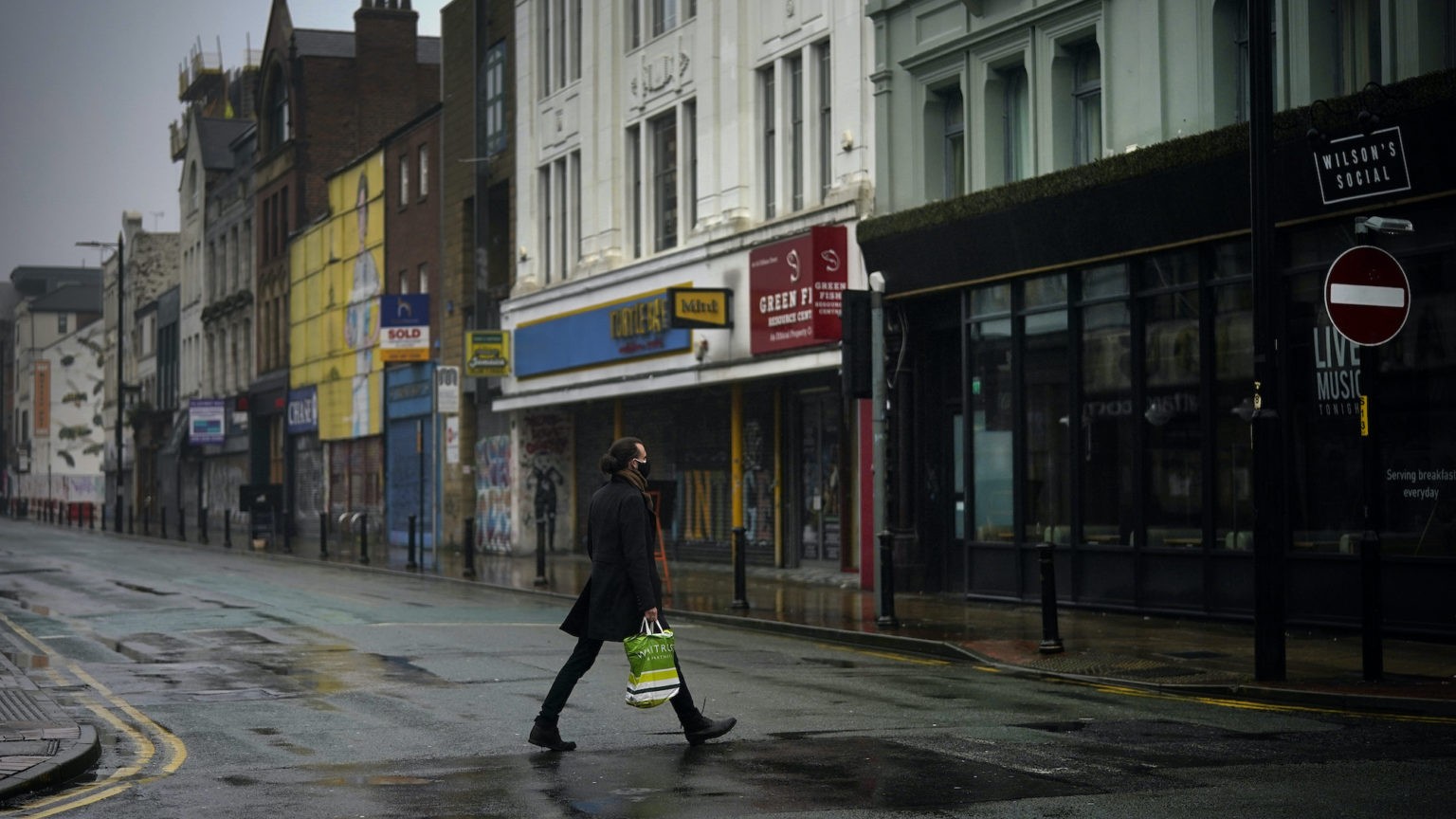 So the logic of the latest lockdown is frying my goddamn mind. On a list of conundrums I can’t solve, ‘If a woman sits alone on a bench can she transmit a virus she probably doesn’t have?’ is now up there with, ‘If a tree falls in the middle of a forest, and there’s no one around, does it still make a sound?’.

Given three police officers were filmed arresting a woman in Bournemouth for sitting on a bench alone, they clearly thought they knew the answer. On initial inspection, there appeared to be two ways to interpret the footage. Either they had her bang to rights for a lockdown violation, or they were violating her human rights.

However, since then, heroic feats of journalism have been performed — ‘Woman, 50, “arrested for sitting on bench” is Covid conspiracy theorist’. It turns out she hadn’t just been sitting on a bench; she’d walked along the beach with her elderly father picking sea shells, and (according to an ‘ex-friend’) ‘she was going around telling everyone that coronavirus was no worse than getting the sniffles and that it was an attempt to control us all’.

Reading newspaper reports on the state of the Covid-19 situation in London scare the bejesus out of me, so I do not for a second want to upset anyone. However, this bench situation took place in Bournemouth, so I am now going to do my job as a journalist, and try to establish the facts there.

The Bournemouth Echo stated on Monday that ‘the total number of people who have died with coronavirus in Dorset hospitals surpassed 450 [since the start of the pandemic], as eight more were confirmed.’

It is reasonable to suggest – if the virus is as virulent as the science currently suggests – that vastly more than 18,123 people must have been infected with coronavirus in the area. Nevertheless, as it stands, 2.5 per cent of those officially recorded as being infected have sadly died. But, given the population of Dorset is 426,516 (according to the 2018 census), of whom 450 have died, that means that just 0.1 per cent of Dorset’s population has died from Covid across nine months. Surely that is worth bearing in mind amid all the fear, and the actions it is fuelling, including the arrest of a woman sat by herself on a bench in Bournemouth.

After the first lockdown lifted, the cost of locking down was clear. The Bank of England announced that the UK was in the worst economic recession in 300 years. So you would think, during the third lockdown, that every single statistic the government issues to justify it would be crunched by a trained reporter, and printed on the same page as the death-toll graphs which are scaring the crap out of us.

Like the vast majority of people, I was not anti-lockdown in March. I was not even ‘lockdown sceptical’ until November, when I had a very serious wake-up call as regards my duties as a journalist. This was because the Mail Online fact-checked the claims of an NHS healthcare assistant who was standing outside Truro cathedral with a microphone having ‘publicly resigned after claiming she had “no work to do for three weeks” at the peak of the pandemic’:

‘The total deaths from these three hospitals in seven months is 76 people’, she said. ‘That’s about 10 people a month over the past seven months, and we have locked down.’ The Mail Online then looked into what she was saying as regards where she had been working, and NHS figures showed that ‘67 people died from Covid-19 at Treliske hospital between March and September… there were just four people with the virus receiving care at the Royal Cornwall Hospitals NHS Trust on October 29.’

It should not be up to random members of the public to cause scenes that go viral to have a journalist investigate their truth and print it in a newspaper.

Understandably, many think questioning lockdown is as reprehensible now as it was in March. But asking questions and printing the answers (so the public can draw their own conclusions) is the whole point of journalism.

Massive mistakes were made by the government when it first locked down. It was in an atmosphere of hysteria that hospital beds were cleared to make way for coronavirus patients. This meant elderly people – infected with Covid-19 – were sent back to care homes where infection with coronavirus was a death sentence. We know, now, that the virus poses a grave threat to the over-60s – especially men – and those with certain underlying health conditions. But is lockdown the best approach to protecting them until the vaccine can be given to all of us?

The science was not clear in March but it is now being cited like something infallible. But journalists are not questioning why ‘Professor Lockdown’ (as The Times calls Professor Neil Ferguson) is still involved in supplying it. Last year, Ferguson lost his status as a government adviser, temporarily, after he broke his own lockdown rules to visit his lover. But the scandal that should have ruled him out of playing any role in policymaking – now or ever – is almost 20 years old.

In 2001, Ferguson’s models proved instrumental in the slaughter of more than six million cattle, sheep and pigs during an outbreak of foot-and-mouth disease. By 2003, this was estimated to have cost the UK ‘£3.1 billion to agriculture, including losses in export value, with similar losses to tourism and business of £2.7-3.2 billion’. In 2016, a Vet Times investigation concluded the cull

‘was based on a model that was crude and wrong… Wendy Vere, a West Country veterinarian, commented in the Devon Independent Inquiry: “It was carnage by computer.” Retrospective analysis showed the Imperial model was flawed. It is noteworthy that the report of the Royal Society’s inquiry, published after the outbreak, stated: “It is not satisfactory to rely on the development of models during an outbreak, or even to make other than minor modifications to existing research tools.”’

In 2009, Ferguson’s models ‘forecasted that 65,000 people in the UK could die of swine flu, which prompted the WHO’s issuing of a pandemic’. The eventual death toll was 457. His prediction for deaths from mad cow disease was 50,000, and the actual death toll… 177.

Ferguson isn’t the only one manufacturing the ‘scenarios’ the government is basing its decisions on, but it was his ‘computer-modelled research that said more than 500,000 Britons would die without the national lockdown’.

The chancellor Rishi Sunak has since spent £280 billion supporting jobs and businesses. The government is now so invested in the lockdown strategy that it is behaving like a reckless speculator who lost a colossal amount of money backing a bad investment, but who continues to raise the stakes in the hopes of winning big in the end.

How else to translate the headline from last weekend’s Spectator: ‘“We’re going to have a great summer”: an interview with Matt Hancock.’

(Does the man have any clue what paying off a national debt higher than the one we ran up fighting the Second World War is going to do to NHS funding for the next 50 years, never mind kids whose parents can’t afford school meals?)

In this context, some of ‘the science’ cited is actually insulting. ‘Like the original plague which struck the Greeks I seem to remember in book one of the Iliad, [coronavirus] is a zoonotic disease’, the prime minister Boris Johnson told the One Planet summit last week. ‘It originates… from the demented belief that if you grind up the scales of a pangolin you will somehow become more potent or whatever it is people believe.’ It took me five minutes to establish that book one of the Iliad says no such thing, and coronavirus has absolutely nothing to do with mashed-up pangolins.

So. Why is a woman arrested on a bench in Bournemouth dismissed as a ‘conspiracy theorist’ for suggesting the threat of coronavirus is being used to control us? She’s simply articulating a point of view which most people will never hear because they’re deaf from fear.