The EU has badly bungled the vaccine rollout 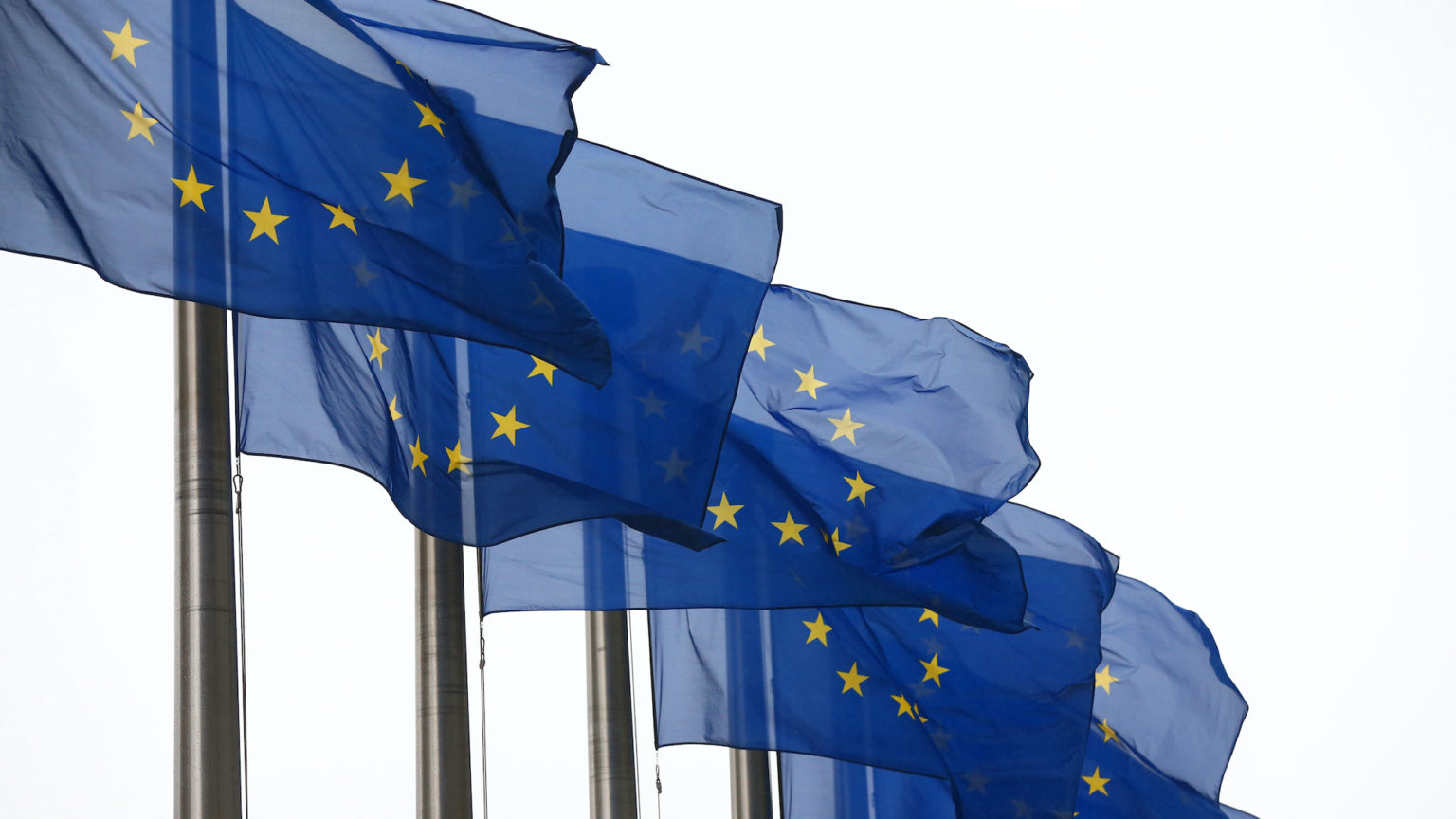 The thing about history is that it can come back and bite you in the arse. Back in March, it was claimed that Brexit could delay the UK’s vaccine rollout. How could we possibly approve vaccines ourselves? Why would pharmaceutical companies sell vaccines to us when they could sell to the far more lucrative EU market?

Well, it turns out that Big Pharma was very happy to sell to little ol’ us – especially when we granted approval for vaccines weeks ahead of the EU. Whatever the problems with the UK’s vaccination programme – still too slow, but building up speed now – most of the EU is way behind. Only Denmark comes out with much credit, rattling along as fast, if not faster, than the UK despite a later start. Italy and Spain have also managed to get things moving to some extent – but what on earth is happening in France, Belgium and the Netherlands?

The first delay was due to regulatory approval. While the UK is hardly a model of minimal bureaucracy, our regulators gave the green light to the Pfizer / BioNTech vaccine on 2 December. It took EU regulators over three weeks longer to give approval.

Another problem has been ‘solidarity’. The EU negotiated deals with pharma companies as a bloc so that everyone could get a fair share and a fair price. However, there was a massive ‘whoops!’ when it was revealed that in addition to getting 60million doses of the Pfizer / BioNTech vaccine through the EU’s purchases, Germany had quietly bought another 30million doses for its own use. So much for the bigger EU countries not using their economic muscle to get ahead of the queue. Of course, the Commission refused to criticise the side deal – it was Germany, after all. 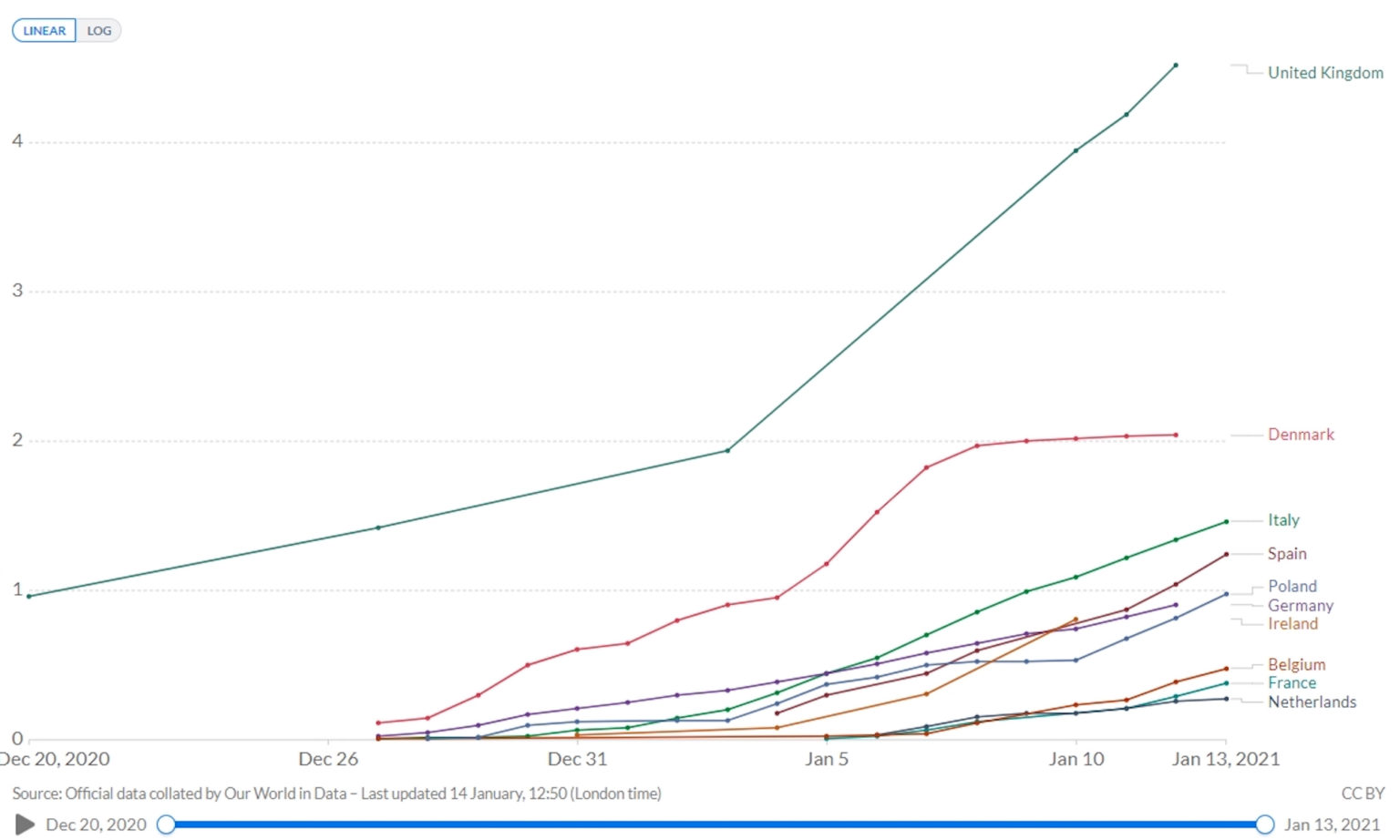 Cumulative Covid-19 vaccination doses administered per 100,000 people. This is counted as a single dose, and may not equal the total number of people vaccinated, depending on the specific dose regime (e.g. people receive multiple doses). Source: Our World in Data

But the vaccines are now available, so why has the rollout been so much slower in some countries? The Netherlands, the chief laggard in the EU, simply didn’t schedule the start of vaccinations until 8 January. In Belgium, a spokesman for the Covid-19 crisis centre explained that there was no particular rush because efforts to dampen down the second wave had been more successful than the UK’s – a bizarre response when Belgium’s cumulative case numbers (57,932 per million people) are still considerably higher than the UK’s (47,890 per million).

France seems bogged down in bureaucracy, in part because of a high degree of vaccine scepticism. Officials want to be absolutely sure that they can demonstrate that consent has been given. The Associated Press reported last weekend that France has started by focusing on care homes. But care-home residents can be the hardest to reach, particularly given the very high bar set for consent – including potential recipients having obligatory consultations with doctors. The French government has committed to vaccinating one million people by the end of January, while the UK has already given a first dose to 2.9million people.

Other countries have started on different groups at the same time. For example, Italy and Spain have been vaccinating healthcare workers as well as older people. Worldwide, the most successful country, by far, is Israel, where over 20 per cent of the population have already been vaccinated. As well as being better organised, the Israeli approach has been less uptight about vaccinating only the most vulnerable – the aim is to vaccinate everyone as quickly as possible, so the precise order is less important, even if the focus is still on the most vulnerable.

When the first impulse across much of the West is to lock down and ask questions later, there is an urgent need to get as many vaccine doses into as many arms – preferably among the most vulnerable to the disease – as quickly as possible. Then, fingers crossed, deaths and hospitalisations should start to fall rapidly.

Yet many EU countries seem incapable of grasping the nettle. Would it be unfair to suggest that the closer that countries are to the bureaucratic mindset of the EU, the slower their response? For all the administrative stupidity of the UK – see, for example, the foot-dragging over approving volunteers to work on the rollout – we do seem to be better off free from the dead weight of the EU.