Don’t exaggerate the threat of the Capitol rioters 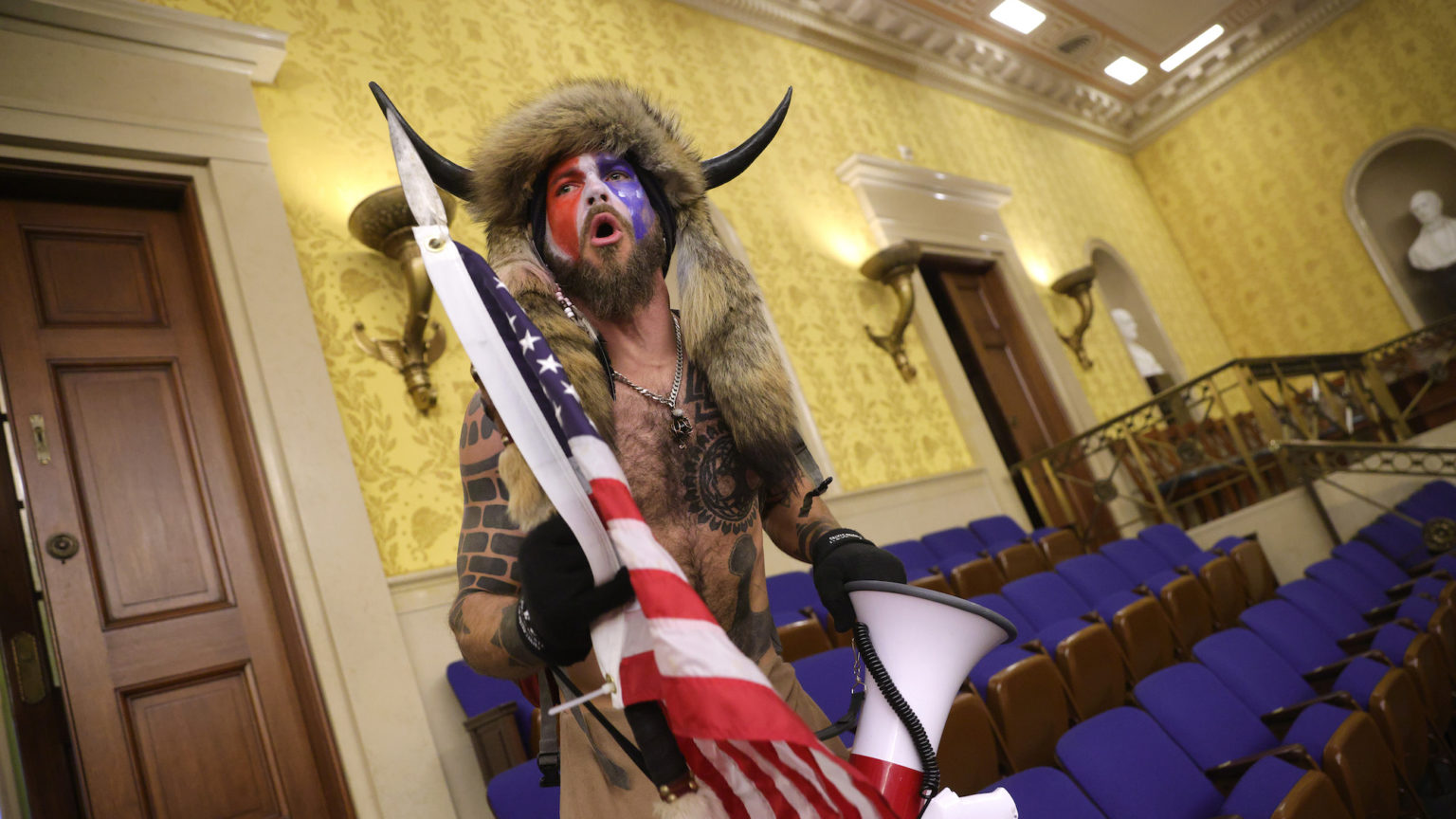 Let’s be clear about what took place at the Capitol Building last night. This was a mob assault on the institutions of democracy. The ragtag army of Capitol breachers may have looked ridiculous, decked out in Trump-wear and face paint and antlers. But what they did was not ridiculous, it was serious. They illegally entered the democratic citadel of the United States, a beacon of democracy to many people around the world, with the express intention of blocking the peaceful transition of power voted for by their fellow citizens. They committed a violent incursion against the practice and the ideal of democracy.

And now let’s be clear about what did not take place at the Capitol Building last night. This was not a fascist coup, as so many shrill, supposedly liberal commentators are claiming. Their flagrant use of the word ‘fascist’ to describe every political movement they disapprove of is an insult to reason and history. This wasn’t a coup full stop. The National Guard suppressed the morons, the barricades were put back up, and even their hero Donald Trump told them to go home. A coup is a conscious effort to illegally seize power from the government. These people couldn’t even believe they made it into the Capitol Building. They were like children finding a candy store unguarded.

And it wasn’t an insurrection, either, as Joe Biden and others are calling it. Except perhaps a pantomime insurrection, a cosplay revolt, a more heated version of those history aficionados who spend their weekends dressed up as soldiers of the American Revolution or the American Civil War.

Challenging the narrative that has been so swiftly built around the invasion of the Capitol – the narrative of a fascist threat to the American republic, of Trump leading a coup d’état, of populism finally revealing its true, foul colours – is not about minimising what occurred. It’s about clarifying what occurred. And it’s about taking a stand against the threat inflation currently being engaged in by significant sections of the cultural and political elites. Their hysterical warnings of resurgent fascism, of small mobs threatening America’s apparently pristine democracy, can only lead to greater authoritarian controls on political action and even on political speech.

Those of us who genuinely believe in freedom and democracy should call for some perspective on last night’s events, not to excuse the anti-democratic cretins who engaged in riotous behaviour, but to guard against an illiberal, anti-democratic response from the managerial elites; to ensure that the response to this event doesn’t end up threatening democracy more than the event itself. I fear it will, and soon.

Across the media, there is a striking disparity between the claims being made about the Capitol incursion and the photographs of it. The claims are extreme: this is fascism, they say; it’s like 1933; the far-right is now usurping democracy itself. The German foreign minister even made a reference to the Reichstag Fire, the 1933 arson against the German parliament that the Nazis used as a pretext to seize power.

But the photos show something very different. They show wide-eyed protesters, as bemused as the rest of us that they are inside the Capitol Building. In some photos it looks more like an unscheduled tour of the Capitol rather than anything like a coup – the protesters even stayed inside the barriers as they walked along the carpet into the Capitol Building. They took selfies while sitting on the Speaker’s chair. One of the modern-day Hitlers grins as he poses for a photo next to the statue of Ronald Reagan. If it wasn’t for the terrible tragedy that subsequently unfolded – four people died in the melee – one could be forgiven for thinking this was a badly timed public visit to the Capitol, accidentally occurring while representatives were present.

It is important to note this disparity because it confirms that something very political is taking place right now. The threat inflation, the wild claims about a fascist coup, are transparent efforts by the cosseted political and cultural elites to endow their project with moral importance; to give their restoration of managerial, technocratic power after the four-year populist experiment – which is fundamentally the project that Biden and his influential supporters are currently engaged in – the gloss of historical urgency. It is mission creation.

Worse, this narrative-building will allow the elites to circumscribe even more forms of political thought and speech than they already desire to do, on the basis that the latent fascism among the American rabble is likely to be stirred up by inflammatory ideas and commentary. Indeed, we’ve already been given a chilling glimpse of this post-incursion clampdown on ‘violent’ speech in Twitter’s extraordinary decision to ban, outright, three of Trump’s tweets last night and to lock him out of his account for 12 hours.

It strikes me that this unilateral use of corporate power by Silicon Valley to prevent the democratically elected president of the United States from engaging with millions of his voters and supporters, to physically forbid him from partaking in online discussion, is a grave assault on democracy, too. More grave, I would say, than the immoral and anti-democratic incursion of the Capitol Building. Already, right away, we are seeing that the threat-inflating response to last night’s events will likely have longer-lasting negative consequences for open debate and democratic norms than the thing itself.

The elites’ condemnation of the riotous invaders rings hollow, too. These are the same elites who refused, for weeks, to condemn the savagely destructive rioting that gripped large parts of the US over the summer in the wake of the police murder of George Floyd in Minneapolis. Indeed, serious commentators condemned anyone who used words like ‘riots’ and ‘looting’. CNN infamously referred to fiery assaults on buildings and livelihoods as ‘mostly peaceful’ protests. Biden and other leading Democrats were silent. When protesters assaulted police stations and even a courthouse, in Portland, little was said. You cannot implicitly green-light BLM rioting for weeks on end and then condemn the violent lunacy in the Capitol and expect to be taken seriously.

It is not whataboutery to draw attention to the elites’ meek response to earlier riotous behaviour. Rather, it is about understanding the growing dominion enjoyed by the new clerisy over the political narrative and even over language and words themselves. Their cultural and media supremacy means they increasingly have the power to narrate BLM rioting as not being rioting at all, while a violent incursion in the Capitol is literal fascism; it means they can say that anti-lockdown protests during a lockdown are lethal to public health, but anti-police protests are not; it means they can secure the silencing and even sacking of anyone who referred to the BLM violence as looting and who called for the National Guard to intervene, while cheering as police at the Capitol shoot protesters. It is this control of political narration, of thought itself, of the very meaning of words like riot, looting, fascism, peaceful and so on, that must be highlighted and confronted.

Then there’s the double standards over democracy. British politicians who spent four years trying to trash the largest democratic vote in our country’s history – the vote for Brexit – are now condemning protesters in America for trying to trash a democratic vote. Keir Starmer, Caroline Lucas, David Lammy, they’re all doing it. Lammy refers to Trump as an ‘enemy of democracy’ – big talk for an MP who explicitly called on his fellow MPs to overthrow the ‘nightmare’ of Brexit. Perhaps it is because I have in recent times found myself in the midst of 100,000 angry middle-class liberals outside the House of Commons, all of them loudly demanding that officialdom steal and destroy the votes of 17.4million people, that I find British liberals’ current condemnation of anti-democracy in the US to be unconvincing, even nauseating.

Hillary Clinton supporters, too, spread conspiracy theories about Russia stealing the 2016 presidential election and cheered on the security state as it investigated Trump’s election. Did they think this behaviour would not have a long-term impact on respect for democracy? That it wouldn’t encourage cynicism towards America’s electoral process? Democrat conspiracy theorists and hardcore Remainer agitators should look a little more closely at the hotheads who stormed the Capitol – they might see a more clownish, fancy-dress version of their own anti-democratic selves staring back.

Joe Biden won the election, fair and square. The Trumpite campaign to rubbish the election result is wrong and dangerous. Losers’ consent is vital in a healthy democratic society. From Britain’s Remainer elites to the Mueller lovers of the American liberal media to the pro-Trump rioters at the Capitol – all must cease; all must have some respect for the people and their democratic will. That democracy is threatened as much by the supposedly respectable managerial elites as it is by a mob of Biden-haters – more so, in fact – is an important point to reiterate. Otherwise the loud condemners of last night’s terrible actions will secure for themselves an unearned moral authority on the question of democracy, while undermining democracy in a more thorough if more peaceful way than the antlers guy at the Capitol.

Right now, many observers are reading history backwards. They’re talking about last night’s events as the culmination of Trump’s rule, as the ultimate expression of his four-year anti-establishment presidency. This is a teleology of doom. In truth, the incursion of the Capitol signals the desperation and decline and decay of Trumpism. It’s over. And they know it’s over. That is why they are going mad. But just because Trumpism is finished, that doesn’t mean populism should be. On the contrary, we need the populist spirit, unencumbered by Trump, more than ever. We are in greater need of that public energetic thirst for power and for change now than we were in 2016. Why? To guard America and democracy more broadly against the aloof elites whose illiberal, technocratic project will sadly benefit from last night’s disturbing events and from the dishonest narrative being weaved around them.