The latest restrictions on abortion will undermine women’s autonomy even more. 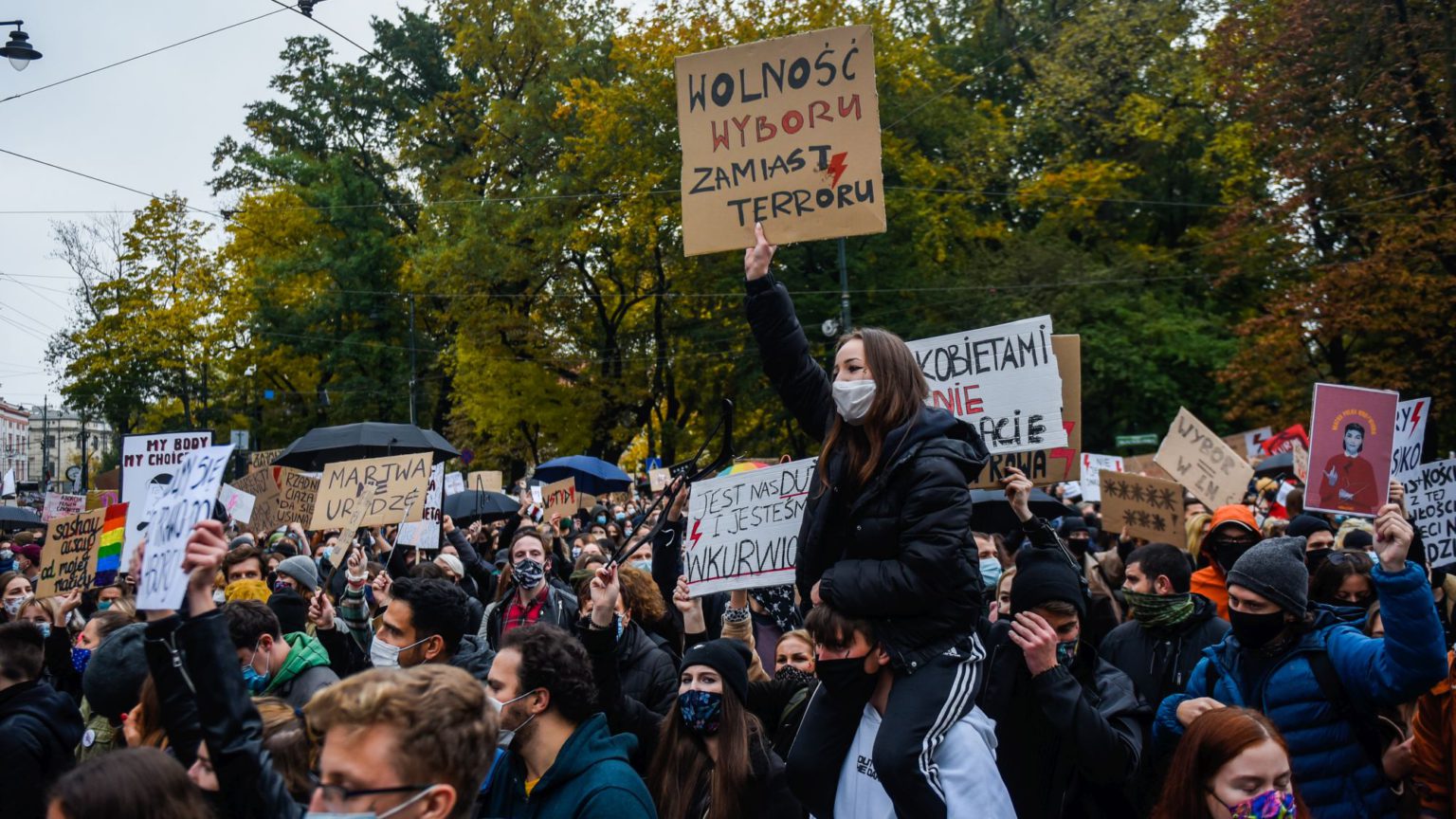 Thousands of women have been protesting on the streets of Poland, in Warsaw and smaller towns like Mogilno, against new laws banning abortion in almost all cases.

A legal challenge to a 1993 Act, which allowed abortion in cases where ‘there is a high probability of a severe and irreversible fetal defect or incurable illness that threatens the fetus’s life’, has banned abortion in all cases except rape, incest and where the mother’s life is in imminent danger. Protesters have been pepper-sprayed by riot police and intimidated by far-right thugs, but women continue to come out brandishing banners with the words ‘Strajk Kobiet’ (‘women’s strike’) and ‘Wyrok Na Kobiety’ (‘sentence on women’).

Polish women have been here before. In 2016 there were mass demonstrations – dubbed the Czarny (Black) Protest – after a petition was put before the government to outlaw abortion entirely. That would have led to women potentially being jailed for five years if they had an abortion. The protests put enough pressure on the government for the proposed change to be voted down in the Polish parliament, by 352 to 58 votes.

Now, four years later, Poland’s governing party, the Law and Justice party, is attempting another attack on abortion rights, this time via a legal challenge claiming that the allowance for abortion in cases of fetal abnormality is unconstitutional and runs counter to Poland’s strict pro-life outlook. This challenge has been successful, helped by the fact that a majority of the judges in the constitutional court were elected by the Law and Justice party. Indeed, the president of the Constitutional Tribunal, Julia Przyłębska, was appointed on the recommendation of the party in 2016. In announcing the ruling, Przyłębska said that legalising abortion in cases of fetal abnormality amounts to a ‘eugenic’ practice.

Three things are important about the latest attacks on Polish women’s freedom. The first is that there has been very little public support for the latest moves. Despite Poland being a staunchly Catholic country, opinion polls show that voters were happy with the status quo. The political defeat of the petition of 2016 ought to have been evidence enough that Poles are not in favour of further limitations on abortion rights.

The second important thing is that, because the Polish government is pushing its new clampdown on abortion rights during the Covid pandemic, it has more leeway to crack down on pro-choice protests this time. A lot of politics is at play here. Many believe that the new restrictions are an effort by the Law and Justice party to regain the favour of Catholic voters at a time when it is feeling squeezed by the rise of the far-right Confederation Liberty and Independence party.

The third and perhaps most important thing to consider is that while just 1,000 abortions were legally permitted in Poland last year, somewhere between 80,000 and 120,000 Polish women travel abroad to access abortion services every year. Currently, around 98 per cent of all abortions that legally take place in Poland are carried out for reasons of fetal abnormality. The latest restrictions would prevent virtually all of these abortions. This isn’t about protecting life – it is about denying women the healthcare that they need and want.

It’s not good enough simply to tweet solidarity every time a backward government restricts women’s freedom in this way. We must also confront the insidious reasoning behind the restrictions. The Polish ruling uses the pretence of protecting ‘vulnerable’ groups like disabled people as a way of undermining women’s bodily autonomy.

And it isn’t only hardcore anti-choice figures in Poland who are doing this. There have also been campaigns in the UK to remove women’s right to screen their pregnancies for Down’s Syndrome and other conditions in case they decide to opt for a termination. Some disability-rights groups argue that the discrimination they suffer in society can be linked to women’s decisions to have abortions on the grounds of fetal abnormalities. This use of anti-discrimination language to attack women’s freedom is outrageous. Women make individual choices about their pregnancies; their decisions are not ‘eugenicist’ and are not a comment on the worth or the rights of disabled people in our society.

It’s quite remarkable to think that, in 2020, women are still prevented from making certain decisions about their own bodies, everywhere from London to Warsaw, New York to Belfast. Almost nowhere are women allowed to make decisions about their pregnancy without the scrutiny of lawmakers, politicians and campaigners. The only way truly to realise women’s freedom in the 21st century is by arguing for the decriminalisation of abortion and trusting women to make the right decisions about our bodies and our lives in a private consultation with our doctors, just like other patients do.

The madness in Poland should provoke a lot of soul-searching in other countries, too, where women’s freedom is often undermined by reactionary laws and cowardly governments. In solidarity with the protesters in Poland, let’s call for the decriminalisation of abortion once and for all.