Trump is now more progressive than the left

The president’s views on race, freedom and American history are putting the liberal-left to shame. 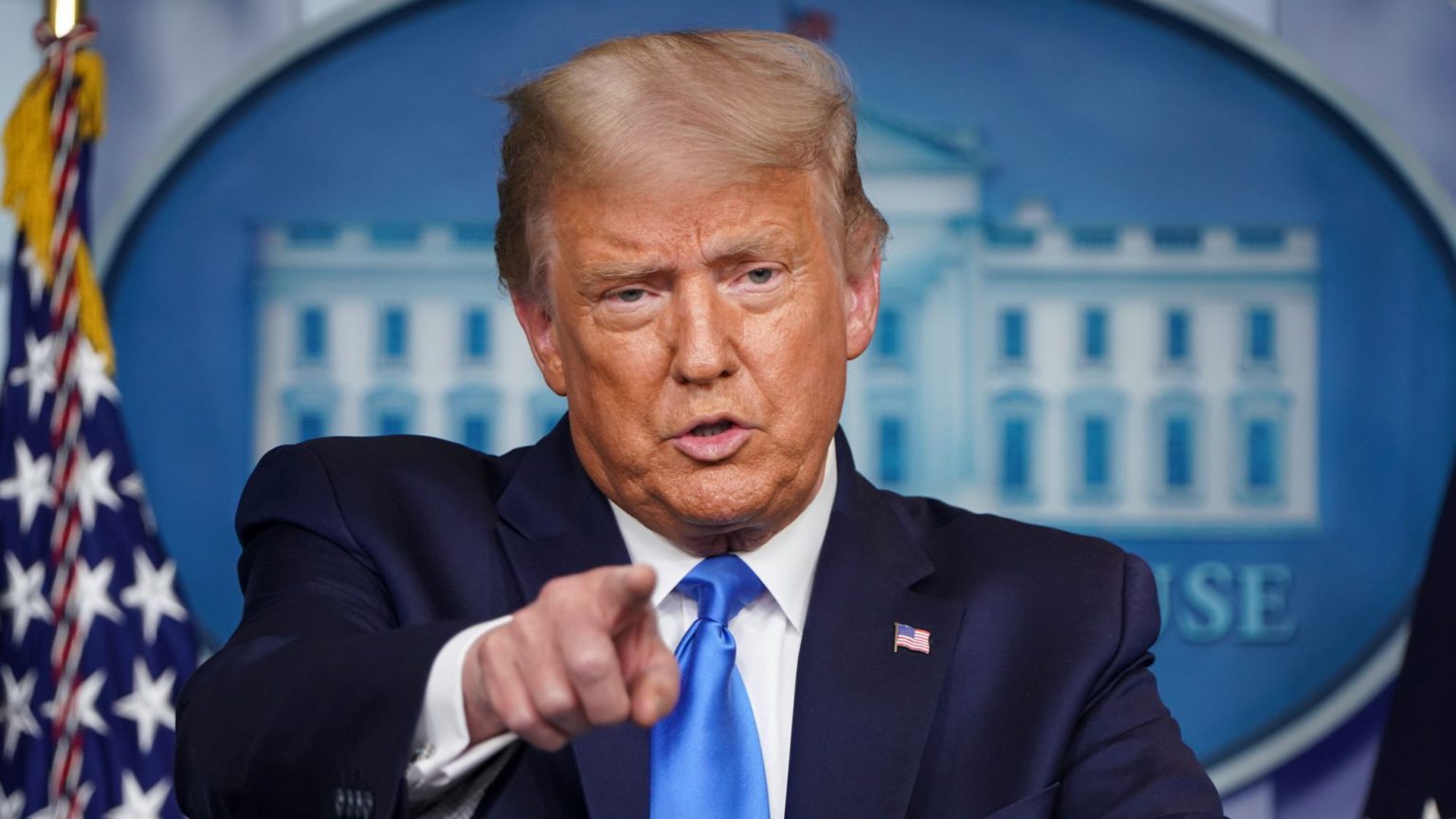 Trump is Hitler. Literally. Remember that? Leftists marched through the streets with placards showing Trump with a Hitler tache. Serious commentators said Trump’s rhetoric had ominous echoes of the 1930s. And they’re still at it. Under Trump, America is ‘spiralling towards fascism’, said a columnist for the Guardian last week.

Not only is all this Hitler-talk a cheap and cynical shot, it’s the polar opposite of the truth. Far from being a reincarnation of mid-20th-century evil, Trump is increasingly saying things that the left ought to be saying. On every issue, from race to freedom to revolutionary history, the Bad Orange Man is now more progressive than the left that loves to hate him.

Something striking has happened in recent weeks: Trump has joined the culture wars with relish. And he’s joined on the side of those who want to live in a post-racial, free society that cherishes the leaps forward made by revolutionaries in the past. You don’t need to be an expert on 1930s and 1940s Europe to know that this isn’t what Hitler was about. Post-racial? Hitler was all about race. He loved it. He saw everything through its noxious prism.

Trump, in contrast, has set himself up as an opponent of racial thinking in its entirety. In a striking intervention last week, he attacked the racial myopia of the new left and the identitarian set. At a White House Conference on American History, he ridiculed critical race theory – the fashionable, academia-spawned outlook that says America is an inescapably racist country and that all white people are privileged and all black people are oppressed. It is a ‘horrible doctrine’, he said, which, ‘by viewing every issue through the lens of race’, risks imposing a ‘new segregation’ in American society.

Trump cited an example of critical race theory to show that it isn’t only demeaning to white people but to black people, too. He referred to the Smithsonian Institute’s recent claim that ‘concepts such as hard work, rational thinking, the nuclear family and belief in God’ are ‘not values that unite all Americans’ but rather are ‘aspects of “whiteness”’. This is ‘offensive and outrageous’, Trump said, especially to ‘children of minority backgrounds who should be uplifted, not disparaged’.

Trump countered critical race theory with the words of Martin Luther King. Describing King as one of ‘the most incredible people who ever lived’, he said we should ‘embrace [his] vision… where children are not judged by the colour of their skin but by the content of their character’. The identitarian left is trying to destroy that ‘beautiful vision’, he said, and to ‘divide Americans by race in the service of political power’.

No doubt some will say he is just posturing. What about the disparaging comments he has made about Mexicans? Or his travel ban on people from certain Muslim-majority countries? He’s no anti-racist. And perhaps these people have a point. But the broader question, surely, is why it has fallen to Donald Trump, the demagogue most hated by the liberal elites, to defend the legacy of Martin Luther King and the vision of a post-racial society against a new, sometimes violent identitarian movement that is obsessed with racial categorisation and which promotes a view of whites as wicked and blacks as weak and pathetic and incapable of hard work and rational thinking.

The question isn’t ‘Is Trump being opportunistic when he criticises the poisonous new politics of race?’. It’s ‘Why hasn’t Joe Biden or Bernie Sanders or the apparently high-minded, left-leaning writers at the New York Times done likewise?’. The modern left has so thoroughly abandoned its old universalist principles – its rejection of racial thinking and its preference for character over colour – that it now falls to Trump to make these good, decent, liberal points. It’s no good people saying he’s just pretending to be an anti-racist, unless they also explain why so much of the contemporary left has fully and dangerously bought into the rehabilitation of racial thinking and the replacement of the MLK outlook with a wholly regressive view of whites and blacks as irredeemably different beings.

Trump took a shot at identity politics more broadly in his speech on American history. Instead of fragmenting the public into ever-splitting categories of race, gender and sexuality, we should recognise that our ‘only path to national unity is through our shared identity as Americans’, he said. And again the question arises: why haven’t the Democrats said this? Why is the supposedly left-liberal party constantly playing a modern, PC version of pork-barrel politics, always appealing to ethnic blocs, instead of emphasising the most important identity in the US – the national one, the unifying one, the American one? Trump’s executive order banning federal employers from promoting critical race theory is likely to be popular with a large swathe of American society.

Trump has also taken a firmer stand against insidious new forms of censorship than most of the liberal elite has. Three days before that Harper’s letter was published, in which literary figures and activists made some strong points about cancel culture, Trump gave a speech at Mount Rushmore in which he slammed the new McCarthyism. The ‘political weapon’ of ‘cancel culture’ is being used to totalitarian ends, he said, ‘driving people from their jobs, shaming dissenters and demanding total submission from anyone who disagrees’.

In relation to the ideology of political correctness that insists that everyone must adhere to correct-think on race, gender and other issues, Trump said: ‘If you do not speak its language, perform its rituals, recite its mantras, and follow its commandments, then you will be censored, banished, blacklisted, persecuted and punished.’ He’s right. It used to be the left, especially the countercultural left, that bristled at any ideology that demanded unflinching conformity. Now, much of the left imposes just such an ideology, or denies that it exists (‘cancel culture is a myth’), while it is left to Trump to stand up for the freedoms of thought and speech.

Trump also does a better job than the contemporary left of valorising the revolutionary ideals upon which America was founded. Where the new nihilists of the radical left and the academic elites constantly slam the US, and the West more broadly, as evil entities born in sin, arising from the horrors of slavery and Empire, Trump puts in a good word for Jefferson and the American Revolution and for 1776. He says he wants to counter ‘the crusade against American history’.

His key target is the 1619 Project, the New York Times’ multimedia educational tool that seeks to rewrite American history so that the arrival of the first slaves in 1619 would be its founding moment, rather than the revolutionary upheaval of 1775 to 1783, including of course the signing of the Declaration of Independence in 1776. Trump has now set up the 1776 Commission to teach children about the ‘miracle of American history’.

Like parodies of themselves, his critics have cited his 1776 Commission as proof of his fascistic tendencies. America is ‘spiralling towards fascism’ and the 1776 Commission is an effort to ‘Make America White Again’, said the Guardian, literally making no sense. The truth is that the cultural elites now sneer at the revolutionary founding of the United States – the first nation in history founded as a democracy – and tirelessly talk about America’s original sin of slavery and its legacy of white supremacy. Their political worldview is a nihilistic one that sees the US as malevolent society at root, whereas Trump holds the US up as a nation founded in revolution, optimism and the ideals of ‘incredible people’ such as Jefferson and King. And people still wonder why Trump appeals to working Americans more than coastal America-bashers do.

But Trump doesn’t really believe in freedom of speech, people will say. And he isn’t really against identity politics, they will insist. And he probably doesn’t know much about American history, they will joke. And again, perhaps they’re right. There are certainly many profound problems with Trump’s views and style. But this is the bottom line: he is going into this presidential election criticising cancel culture, publicly denouncing divisive identity politics, celebrating America’s democratic founding and quoting Martin Luther King, while the other side drones on about white privilege, hurtful words, BLM, slavery and the need to have a reckoning with America’s allegedly evil past. If Trump keeps this up, whether it’s an act or not, he will attract those many, many Americans who love their country and who think character is the only true measure of an individual’s worth.