The LGBT community is now the LGBTQQIP2SAA movement. It’s getting ridiculous. 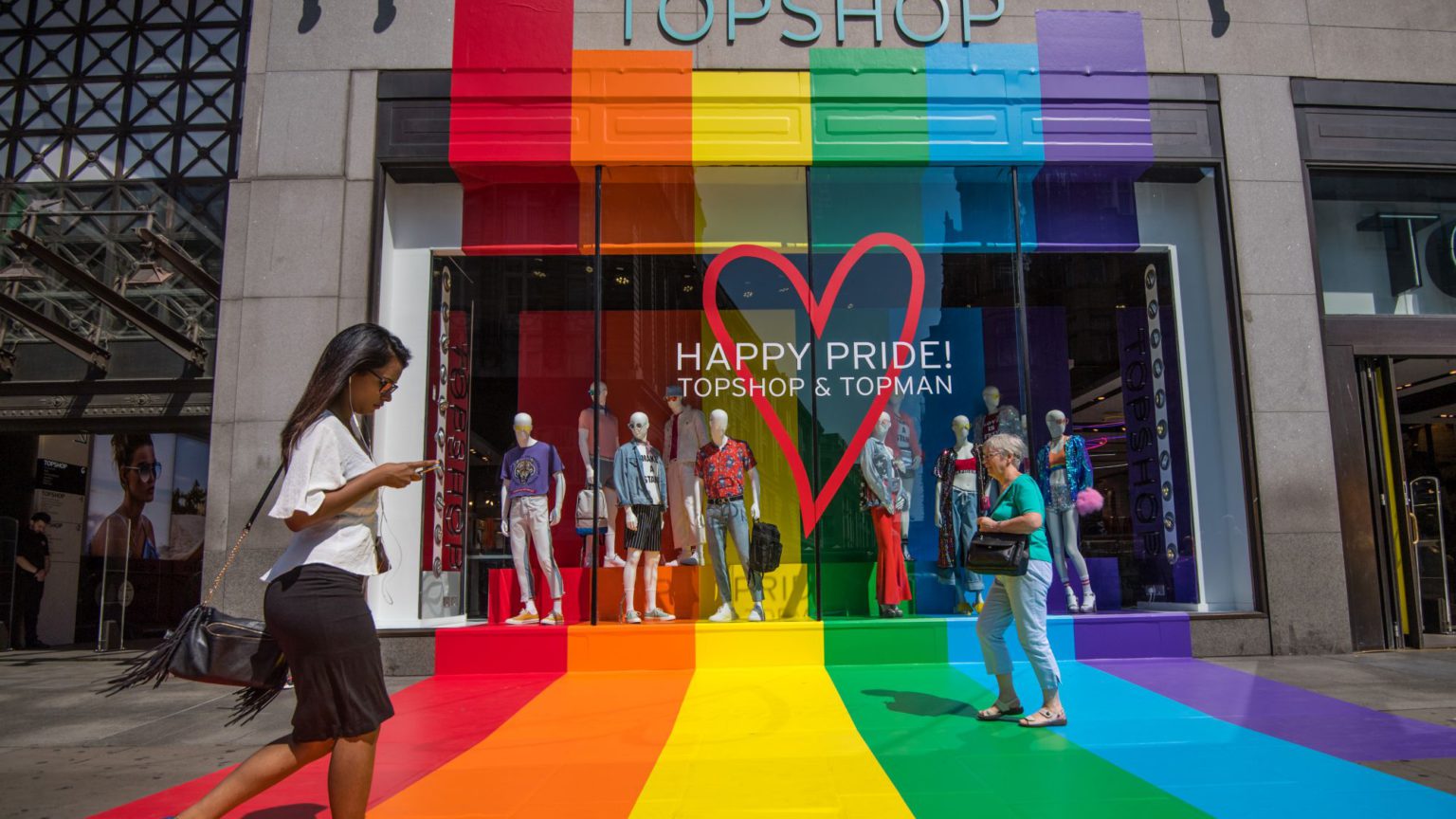 Six or seven years ago I wrote a stand-up comedy routine about the ever-expanding initialism that went from LGB to LGBT to LGBTQI, and so on. The routine centred on the concept of what might happen should the string of letters continue to grow until the entire alphabet was featured. By the end of 2016 the joke had dated, not because identity politics was no longer topical – far from it – but because the ‘community’ in question had already taken the joke further than I had envisaged, even to the point of duplicating letters and adding numbers for good measure.

Some activists favoured LGBTQIA+. Others felt that this was insufficiently inclusive for those who identified as ‘two-spirit’ and so preferred LGBT2Q+. Then there was LGBTQ2SIA, which was not to be confused with LGBTQQIP2SAA. The People’s Front of Judea squabbling with the Judean People’s Front springs to mind.

The rainbow flag for Pride has been through a similarly bewildering metamorphosis. It was designed in the late 1970s to supersede the pink triangle, which had been appropriated from Nazi concentration camps as a gesture of empowerment and defiance. The new rainbow symbol was a conscious attempt to distance itself from such dark connotations and express a more joyful and optimistic outlook.

Originally featuring eight stripes, it was soon whittled down to a more striking six-stripe version, which was the standard for many decades. With the ungovernable escalation of identity politics and intersectionality over the past few years, various interest groups have competed for ‘representation’ on the flag. The ‘progress flag’, for instance, adds a five-stripe chevron: the pink, light blue and white stripes signify trans rights, while the black and brown stripes represent people of colour – as though the original rainbow was some kind of literal depiction of the skin colours that are acceptable in the gay community.

If you find all of this confusing, you’re not alone. Now that Pride has its own month (February, with its occasional ‘leaps’, has always been the gayest of the months), there are flags for every conceivable sexual or gender identity. These aren’t necessarily representative of groups that have been historically persecuted, but rather a hotchpotch of neologisms that can be seemingly selected at will like so many fashion accessories.

So now there are flags available for those who identify as pangender, aporagender, agender, bigender, trigender, genderqueer, genderfluid, demigender, demigirl, demiboy, neutrois, polyamorous, non-binary, asexual, omnisexual, polysexual, abrosexual, androsexual, gynosexual, skoliosexual, aromantic, gender questioning, gender non-conforming, and many more. Surely it would be far easier to create one giant flag for narcissists and be done with it.

This obsession with niche identities advances the idea that at the heart of gender and sexuality is the notion of choice. This works directly against the ‘born this way’ mantra of the various gay-liberation movements of the 20th century. This is largely a development from the social constructionist dogma of Queer Theory, fashionable for a time in the late 1990s and early 2000s, which rejected the notion of biological essentialism as oppressive. While the worship of Michel Foucault is somewhat outdated in academic circles (in 1995, Queer Theorist David M Halperin even went so far as to write a book called Saint Foucault: Towards a Gay Hagiography), the core ideas have found their way into the mainstream, particularly the emphasis on those nebulous power structures we keep hearing about that apparently dominate society.

Many trans activists, on the other hand, are following the lead of the early gay-rights movement, advancing the biological-essentialist argument that they are born with male or female brains in bodies of the opposing sex. Many social-justice ideologues even try to maintain both positions at once, claiming that sex is a social construct but that trans people are born in the wrong body. Consistency isn’t their strong suit.

As the regalia and lexicon of the LGBTQIA+ movement grows ever more absurd, one cannot escape the feeling that many of its proponents are nostalgic for the oppression of the past. Present-day identity politics is rooted in narratives of victimhood. This makes sense in countries where being gay is illegal or even punishable by death, but no sense at all in a country like the UK where equal rights have been long established.

This is not to suggest that homophobia has ceased to exist, or that we shouldn’t be vigorously opposing it wherever it lingers, but to be gay in the UK in 2020 no longer carries the risk of arrest or social ostracisation. It is an insult to the achievements of civil-rights luminaries of the past to pretend that gay people are more oppressed than ever. Compared to Harvey Milk and Stormé DeLarverie, the LGBTQIA+ activists of today seem like drunken brawlers still swinging their arms at imaginary foes even after the pub is shut.

So when Avanti West Coast announced its new ‘Pride train’ last week, one could sense the collective embarrassment of LGBT people throughout the country. Painted gaudily with the enhanced ‘progress’ pride flag colours, this nightmarish spectacle screamed its way from London Euston to Manchester Piccadilly to an approving fanfare from the British press. There were no heterosexual staff members, announcements were interspersed with facts about Pride and its history, and there were compulsory YMCA dance breaks for all passengers. And even though I made the last one up, it may as well be true.

The struggle for gay rights was about equal treatment before the law, and making visible those whose persecution by the state had driven them into the shadows of society. Now that equality has been achieved, Pride has descended into a corporate orgy of identitarianism. The rainbow flag and all its tawdry spinoffs are a marker of virtue for companies that wish to sell products to the gullible and declare their commitment to ‘diversity and inclusion’. Last year I had the misfortune of dining at a restaurant in Soho awash with rainbow flags, with signs that openly stated that the company supported equal rights for LGBT people. Why would they suppose anyone would assume otherwise? If anything, a business that feels the need to shout about how it doesn’t discriminate against gay people makes me suspect that it might be secretly homophobic.

There is a meme on social media about Pride month that depicts a slavering creature straight out of Dante’s Inferno, enticing a long queue of gays into its open mouth with a strategically placed rainbow flag. The cynicism seems justified. Most corporations were certainly not celebrating Pride quite so openly before Section 28 was repealed in 2003, or before the age of consent was equalised in 2001, or before the decriminalisation of homosexuality in Scotland in 1980. Their commitment to LGBT rights apparently only manifests itself when it is likely to make them a profit.

Similarly, now that companies appear to be in lockstep when it comes to exploiting the history of gay rights for a quick buck, it isn’t all that surprising that Avanti would claim that its new Pride train aims to ‘bring people of colour, transgender people and those living with or who have been lost to HIV/AIDS to the forefront’. If social harmony is genuinely the concern, there are surely better ways to accomplish this goal than through the medium of hideous trains.

To me, the idea of celebrating one’s heterosexuality, homosexuality or bisexuality makes about as much sense as feeling pride about being right-handed or blue-eyed. That said, I do understand that for many people the notion of sexual identity still matters, and I have no objection to anyone who wishes to participate in Pride events. It just strikes me as a shame that the flag no longer appears to be a symbol of empowerment or a tribute to the success of historical gay struggles, but is rather a tool for avaricious corporations and a signal of one’s fealty to a divisive ideological worldview.

I am not the only one to have noticed that some of the most vicious and bullying individuals on social media carry rainbow flags in their bios, a depressing example of what happens when good causes are hijacked by intolerant identitarians.

Little wonder, then, that more and more gay people are feeling uncomfortable about the Pride flag and the various LGBT initialisms. We’re all for unity, equal rights and taking a stand against prejudice and discrimination, which is why flags and convoluted strings of letters that generate alienation and division seem well past the point of any utility. Even Stonewall, the UK’s pre-eminent gay-rights group, is stoking division with its homophobic redefinition of ‘homosexuality’ as ‘same-gender attraction’ rather than ‘same-sex attraction’. If we’re serious about gay equality, it’s time to jettison this self-satirising and self-indulgent brand of identity politics and focus on our common humanity. And we should start by derailing that fucking train.