A healthy society does not destroy its monuments

There are good reasons to be disturbed by the infantile attacks on historic symbols. 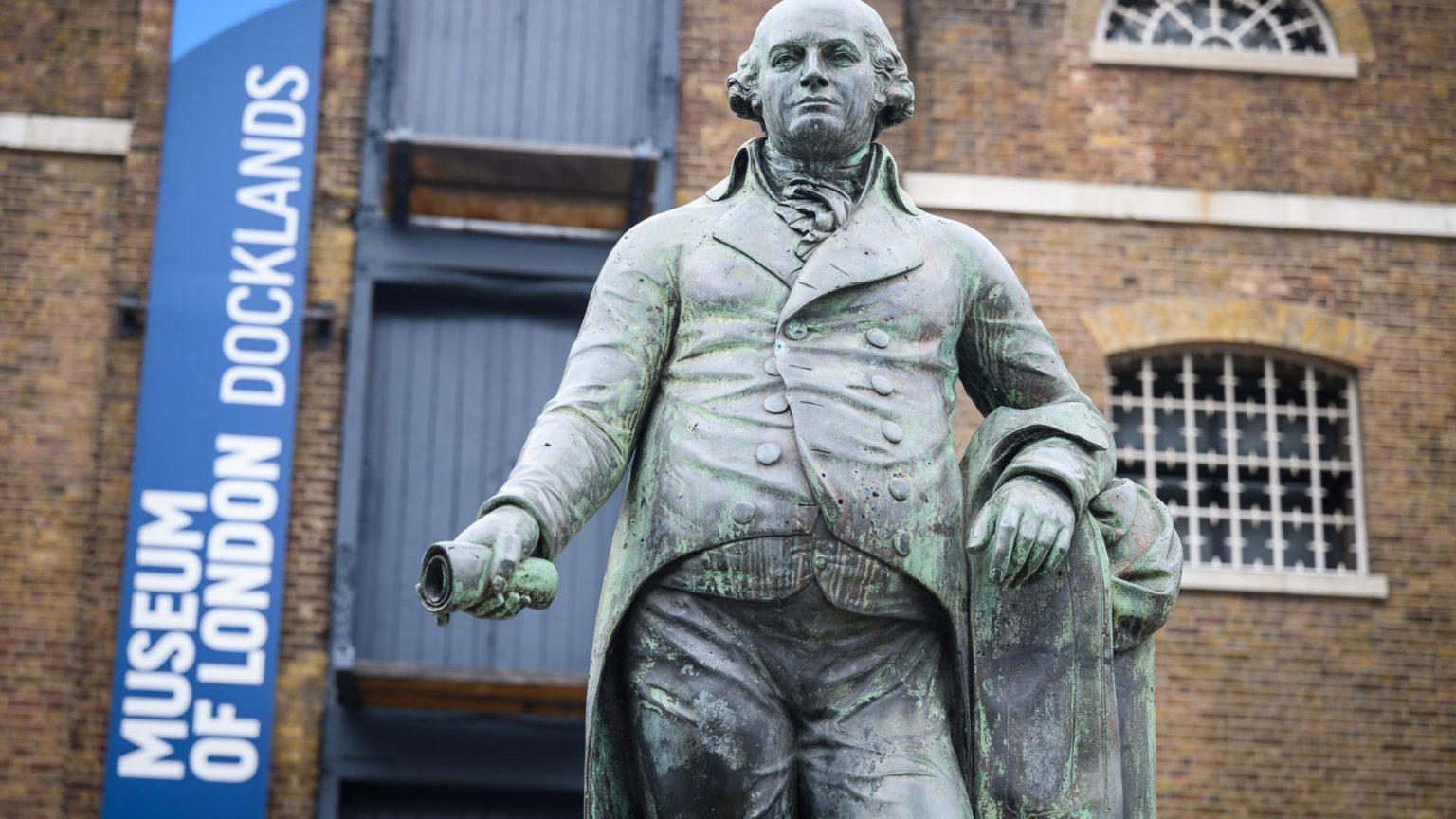 Earlier this month, slave trader Robert Milligan’s statue was taken down from its spot outside the Museum of London Docklands, with the vocal support of London mayor Sadiq Khan – apparently in a concession to the Black Lives Matter protests.

For the past 10 years, I have been taking groups of students to the museum’s London, Sugar and Slavery gallery. The statue of Milligan was the natural starting point of the tour because it was an illustration of the connection between the West India Docks, of which Milligan was the deputy chair, and the slave trade. As I talked at the plinth to students, there used to be a line of teachers waiting to do the same – some from schools in Tower Hamlets, others from places further afield like France and America. It is a great museum and you should go there.

The statue of Milligan was first put up in 1813 – though it was packed away in storage in 1943 and not repositioned until 1997. The only purpose it has served in modern times is as a talking point about the connection between slavery and the development of the docks. It is a loss primarily to those who want to teach about slavery. In modern times, it has never been venerated or even noticed by anyone who was in favour of slavery or of white supremacy of any kind.

The official removal of Milligan’s statue comes after the forced removal of Edward Colston’s statue at the hands of a crew of Bristol’s long-established community of crusty anarchists. While the real-life Colston traded in slaves and funded Bristol’s schools and charities, blissfully unaware, the tin Colston, centuries later, was dragged off and tossed in the river.

There is nothing wrong in principle with defacing or even tearing down public statues and monuments. Some statues have often been comically ‘dethroned’ – as when protestors gave Churchill an astroturf Mohican. Attacks on the statues of dictators following regime change can give vent to liberation movements. Many statues are simply lost as cities develop because they are not very good or well-loved.

But far more often, the attacks on public symbols are indicative of a breakdown in social solidarity – often with alarming consequences. For activists seeking to win popular support, knocking down statues is a high-risk strategy that can provoke the opposite sentiments to those hoped for. The futurist Marinetti’s proposal to fill in the canals of Venice with concrete to make modern roads is a witty way to make a point, but not a sound policy.

Alcibiades was perhaps the first recorded statue vandal. One night in 415 BC he knocked all the stone cocks off the statues of Hermes in Athens. In 1497, the friar Girolamo Savonarola launched a Bonfire of the Vanities in which artworks, books and statues were destroyed out of a fear they would tempt people away from God. As any lover of old English churches knows, the furies of the Puritan revolution led to the destruction and defacing of Catholic saints’ statues and paintings.

In the modern era, the temptation to destroy monuments has been strong. In the First World War, Britain’s local authorities changed German-sounding names of streets like Bismarck Road – now Waterlow Road – while bully boys attacked German-owned shops. In 1933, Nazi students in Germany organised bonfires of subversive books, while the Reich organised an exhibition of ‘degenerate’ modernist art. The burning of books only served as a trial run for the extermination of people, as the symbolic slaughter failed to yield the results of a ‘cleansed’ Germany.

People often make the point that there are no statues of Hitler in Germany – though those were not taken down by Germans, but by the Allied occupiers. You can still see Albert Speer’s Zeppelinfeld and grandstand in Nuremberg, where many of Hitler’s rallies took place, though not much else of his Nazi architecture survives. Mussolini’s architects, Giuseppe Terragni and Marcello Piacentini, did better – much of their absurdly grandiose work survives. The model of an Allied-led ‘denazification’ was in the minds of the US-led forces that overthrew Saddam Hussein in 2003. The destruction of his statue in Baghdad was largely staged by the allies.

Under the Maoist regimes in China and the Khmer Rouge in Cambodia, some of the worst atrocities after the Nazis were carried out. Mao’s ‘Cultural Revolution’ against the ‘four olds’ led to the destruction of books and artworks. Later, there were showtrials and the politically incorrect were battered by the mob. In the wreckage of Cambodia, Pol Pot led a terrifying war on alleged capitalist-roaders and even intellectuals – who could be handily identified by the fact they wore glasses – that led to millions being killed. Pol Pot declared a ‘year zero’ – that all civilisation before the Khmer Rouge took power would be cancelled. Tragically, the wholesale wiping out of Cambodian culture was only a prelude to the extermination of much of its population. The sentiment of wiping out the wrong history was repeated in the war that al-Qaeda-inspired regimes in Afghanistan and Mali conducted against books and statues that did not match their own Islamist views.

In Soviet Russia, when the communist-allied artists of the Proletkult organisation argued that all Tsarist culture should be expunged, the Bolshevik leader Lenin took them to task for ‘rejecting the most valuable achievements of the bourgeois epoch’. Instead, he said, they should assimilate and re-work ‘everything of value in the more than 2,000 years of the development of human thought and culture’. Sadly, Lenin’s wise advice was lost on the Stalinist regimes that followed, during which the policy oscillated between futurist iconoclasm and maudlin Russian sentimentality. History got its revenge in eastern Europe when most of the ubiquitous Lenin and Marx statues came down in the 1990s.

The protests against statues in Britain and America have had some remarkable outcomes. The campaign began with attacks on monuments to Confederate officers (though confusingly most of these were put up in the early 20th century). Black Lives Matter protesters have since turned on Columbus – statues have been torn down and decapitated in Minnesota’s state capital, in Boston and in Richmond, Virginia. The Minnesota statue was commissioned by the Italian Progressive Club of Duluth in 1927 to celebrate the immigrant community’s contribution to American culture. There have also been calls for the removal of statues of leaders of the American Revolution, George Washington and Thomas Jefferson, on the grounds that both owned slaves. In Belgium, the statue of King Leopold was knocked down – one that few will mourn.

The question of whether statues should be taken down turns on our attitude to history. If you feel that history is oppressing you, then you are more likely to want to see those statues fall. To the statue-topplers, allowing them to stand represents a celebration of racism and slavery. But in truth, it is just evidence that social attitudes change over time. How we relate to the past says a lot about us.

A mature attitude understands that studied history is a conversation between the past and the present, where we are at least as interested in the differences between our forebears and us as in the similarities. Those who feel overwhelmed and impotent in the here and now are more likely to see the Colston or Milligan statues as a modern celebration of racism and slavery, rather than what they are – a recognition that we come from that past, too.

The immaturity of the protests against the statues has led to mistaken attacks on anti-racist monuments. In America, abolitionist Matthias Baldwin’s statue was inscribed ‘coloniser’. The Shaw Monument to the 54th African-American battalion in the war against slavery was also graffitied. In London, the statue of the man who abolished slavery, Abraham Lincoln, was daubed with slogans. The Guardian’s Afua Hirsch has renewed her call to consider taking down Nelson’s column on the grounds that he supported slavery – even though he didn’t. One of the stranger turns of monument rage is the campaign to remove Mahatma Gandhi’s statue in Leicester, on the grounds of some racist comments he made against Africans in the early 20th century, as if these were of more importance than leading the liberation struggle that freed India.

‘You don’t need a statue to teach history,’ say the iconoclasts, ‘there are, y’know, books!’. But getting students to take history seriously is not easy when even professional museum curators are tweeting advice on how to damage monuments.

Those who attack monuments are almost always substituting their own views for those of the wider public, claiming a transcendent right of outrage. Since the initial success of the statue protests, those Labour Party activists who stoked them have been surprised at the depth of support that many historic (and some not-so-historic) monuments have. A poll by Opinium shows that only 25 per cent approve of the protesters who removed the Colston statue.

When some of the good citizens of Poole rallied to support the statue of Robert Baden-Powell, they were derided as ‘gammon’. But an estimated 54million people worldwide have been Boy Scouts since Baden-Powell founded that movement in Poole in 1907 – it really is not surprising that a few are willing to stick up for him. At the weekend, the Democratic Football Lads Alliance rallied hundreds of right-wingers to ‘defend the statues’. It was of course wholly predictable that the war on statues would be answered with an equally quixotic war to defend the statues (indeed, Gawain Towler predicted it in the Telegraph ).

Many people are genuinely disturbed by the smashing of statues, whatever the history behind them. A fear of disorder and of violent mobs substituting themselves for the democratic process is disturbing. It is disturbing to hear the news of someone tipping corrosive liquid on the statue of the Afro-Caribbean actor Alfred Fagon in Bristol because everyone can see that it is a sublimated act of violence.

Left-wing pundits seem genuinely surprised that more than a few Britons identify with wartime prime minister Winston Churchill, and that just uttering the word ‘racist’ is not enough to convince them that there is nothing to choose between him and Hitler. Having been shocked to find out that many people identify with the figures honoured in statues, the protagonists of demolition are rapidly back-tracking.

With remarkable chutzpah, many on the left now say that the statue debate is a distraction, largely invented by the media. In the Guardian, Jonathan Freedland chided prime minister Boris Johnson for launching a ‘culture war’ to defend the statues, ignoring the fact that the culture war against the statues came first, and was highlighted first and foremost in the Guardian. Sadiq Khan also criticised Johnson for being overly concerned about statues. He said this just days after he supported the removal of Robert Milligan’s statue and set up a Commission for Diversity in the Public Realm to review London’s statues.

Most of all, the statue debate speaks to an Oedipal wish to depose the father / king. As in infant development, the Oedipal stage is one that we all go through, but in maturity abandon. A healthy society does not destroy its monuments.

James Heartfield is author of The Equal Opportunities Revolution, published by Repeater. His latest book is The Blood-Stained Poppy, written with Kevin Rooney.