Should Nelson’s column come down?

Toppling this monument would be philistinism disguised as radicalism. 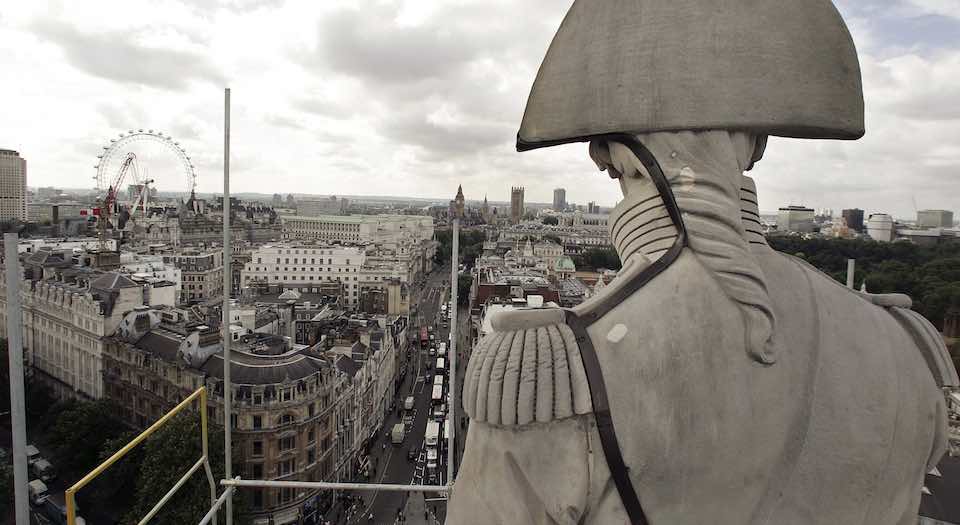 In the small hours, the two men climbed Nelson’s monument and fixed a charge of gelignite and ammonal to the column. It exploded at 1.30 in the morning, blowing the statue of Nelson to the ground, where it shattered; the column, half emasculated, stood until the army blew it up.

That was not Nelson’s column in London, though — it was Nelson’s pillar, a similar monument which stood in the centre of Dublin. It was blown up by a group of renegade Irish republicans led by the charismatic cycle-racer Joe Christle, in March 1966, the 50th anniversary of the Easter Rising that brought an end to British rule in southern Ireland.

Guardian journalist Afua Hirsch courted controversy this week by arguing it might be time to take Nelson’s statue off the column he has stood on in Trafalgar Square in London since 1843 (the man himself died in 1805, fighting Napoleon’s fleet at the battle of Trafalgar, off the Spanish coast).

According to Hirsch, the nation’s hero was what we would today call a ‘white supremacist’, who used his authority, as admiral and lord, to defend the institution of slavery. It would be better, says Hirsch, to honour William Wilberforce, who campaigned to abolish slavery, or indeed the many black writers and activists who fought against the slave trade. Forgetting the history and struggle of black men and women highlights Britain’s uncomfortable relationship with its past, as does the indifference to the pain these imperial monuments cause to their descendants today, says Hirsch. Like the monuments to Confederate generals in the US, they should come down.

The fundamental problem with Hirsch’s approach is not to do with history, but with the present. The image she summons of black Britons recoiling in horror at the history of Nelson is hard to take seriously. And since her point of comparison is the Confederate monuments, it might be worth pointing out that more African-Americans would prefer the monuments to stay where they are than would like them taken down, and many more Americans overall are happy to see them stand.

One ought to object, too, to the general tenor of the argument that the monuments of the past should be censored so as not to offend some people today. Bryan Appleyard’s sarcastic tweet is pertinent: ‘Let’s smash anything over 10 yrs old & create a Ministry of Amnesia. Then all the kids will feel safe all the time.’

Monuments are in their nature conservative, honouring past deeds for us in the present. If one believes that history tends towards a better future, then it must be the case that all history is the history of people with more primitive or reactionary attitudes. But to project our judgments drawn from the present on to the past is surely a mistake. Hirsch objects that by the time Nelson was influential, many people could see that slavery was wrong. Many, it is true, but by no means all. Still, it is a mistake to demand that the past conform to our present-day beliefs.

Hirsch is surely right to say that history is made of good and bad, and that we should acknowledge that. Which is a good argument for not censoring the past but rather enriching our knowledge of it. Evil, as Hegel said, is as much a force for historical change as good. To put forward a version of history that can be manipulated to suit the present, prettified at a whim, seems powerful, but it is ultimately enfeebling, and a celebration of stupidity.

As history, Hirsch’s arguments are wanting, too. The University of Southampton historian Christer Petley drew attention to a letter from Nelson to the Jamaican planter Simon Taylor decrying William Wilberforce’s abolition plans – but in fairness, Nelson was already dead when the letter was reproduced in William Cobbett’s Political Register to help lobby the Lords against the Abolition Bill.

It is a fair argument – and the one that motivated Joe Christle and his comrades in Dublin – to say Nelson represents the victory of the British Empire over its continental rival, Napoleonic France. But that, surely, is the reason he is celebrated by so many Britons. Hirsch says Nelson’s victory is the victory of slavery, and she is right in the sense that Britain’s victory at Trafalgar is the victory of a power that still supported slavery. But then Britain itself is a monument to that victory. It is stretching the point to say Nelson’s column celebrates slavery. Nelson’s substantial contribution was to Britain’s victory over Napoleon, and that is what is celebrated in Trafalgar Square.

Hirsch thinks William Wilberforce a better hero than Nelson, which on the question of slavery he surely was. But there are other questions. After the cavalry charged 60,000 parliamentary reform protesters near Manchester — carrying out the Peterloo Massacre of 1819 — Wilberforce supported repressive acts against further protests. He blamed ‘noxious doctrines’ for the ‘discontents of the people in Lancashire’ and deplored ‘the spirit of blasphemy and disaffection, which was at present unhappily so prevalent’. He would ‘make no concession likely to give power to those who appeared to seek nothing less than the subversion of the constitution.’ Even the greatest hero, it seems, might have feet of clay.

Trade unionists and democrats might say that statues of Wilberforce should be brought down, outraged at his hostility to the campaign for the vote for working people. But what kind of a message would that be? No. Trade unionists and Chartists since then have happily ignored his Tory hostility to the vote and honoured his history as an abolitionist. (Indeed, the harshest criticisms of Wilberforce were made by hardline anti-slavery campaigners, like Thomas Clarkson and Joseph Sturge, who decried his moderate approach.)

Tory champions of Nelson might easily reproach Hirsch to say that the sea power that the Battle of Trafalgar established later became one of the main forces for the abolition of slavery worldwide. They are right. The Royal Navy’s West Coast of Africa Squadron policed the seas and seized slave-trading ships for half a century after the Napoleonic Wars. Of course, in fighting slavery they were also promoting the interests of the British Empire. Whatever Nelson wrote in a letter to a Jamaican planter, published after his death, the Navy he built dedicated itself to fighting slavery.

Putting up monuments is a risky business. The late art historian John Willett said it always risks controversy. Nelson’s column, which had some difficulties in its first few years, is today a much-loved monument that means a great deal to a great many people.

That other Nelson, Nelson Mandela, suffered his bust on the South Bank being regularly attacked. But then, you might say that was the least of his problems. The monumental grave of Karl Marx is also often vandalised. Of Nelson’s pillar in Dublin, WB Yeats said: ‘We should accept the whole past of this nation, and not pick and choose.’ Even the Irish Republican Army said of Christle’s adventure, ‘We have refused to settle for the destruction of the symbols of domination; we are interested in the destruction of the domination itself’.

Many of the critics of monuments of the heroes of Empire object that there is no recollection of the black resistance to slavery, or of the Empire’s crimes. That is odd. In schools, colleges and museums all over the country there are lessons, lectures, galleries and monuments recalling the crimes of the slave trade, its victims and those who fought against it. The Royal Navy’s information pack ‘Chasing Freedom: the Royal Navy and the Suppression of the Slave Trade’, produced for Key Stage 3 school students, is a great place to start.

Schools in Britain have been celebrating Black History Month since the 1980s. Students regularly visit the excellent slavery gallery in the Museum of Docklands in east London and the International Slavery Museum in Liverpool. Many other museums and displays in the slave-trading towns of Glasgow, Southampton and Bristol honour the victims of the slave trade. Last year the BBC invested a great deal of money and time into David Olusoga’s television series and book, Black and British: A Forgotten History, fixing new plaques and monuments all over the country and the former Empire.

It is good that people talk about the monuments and the history of Britain. But the iconoclastic demands to tear down these statues are a performance of historical amnesia and philistinism.