The anti-Cummings elite poses a grave threat to democracy and reason. 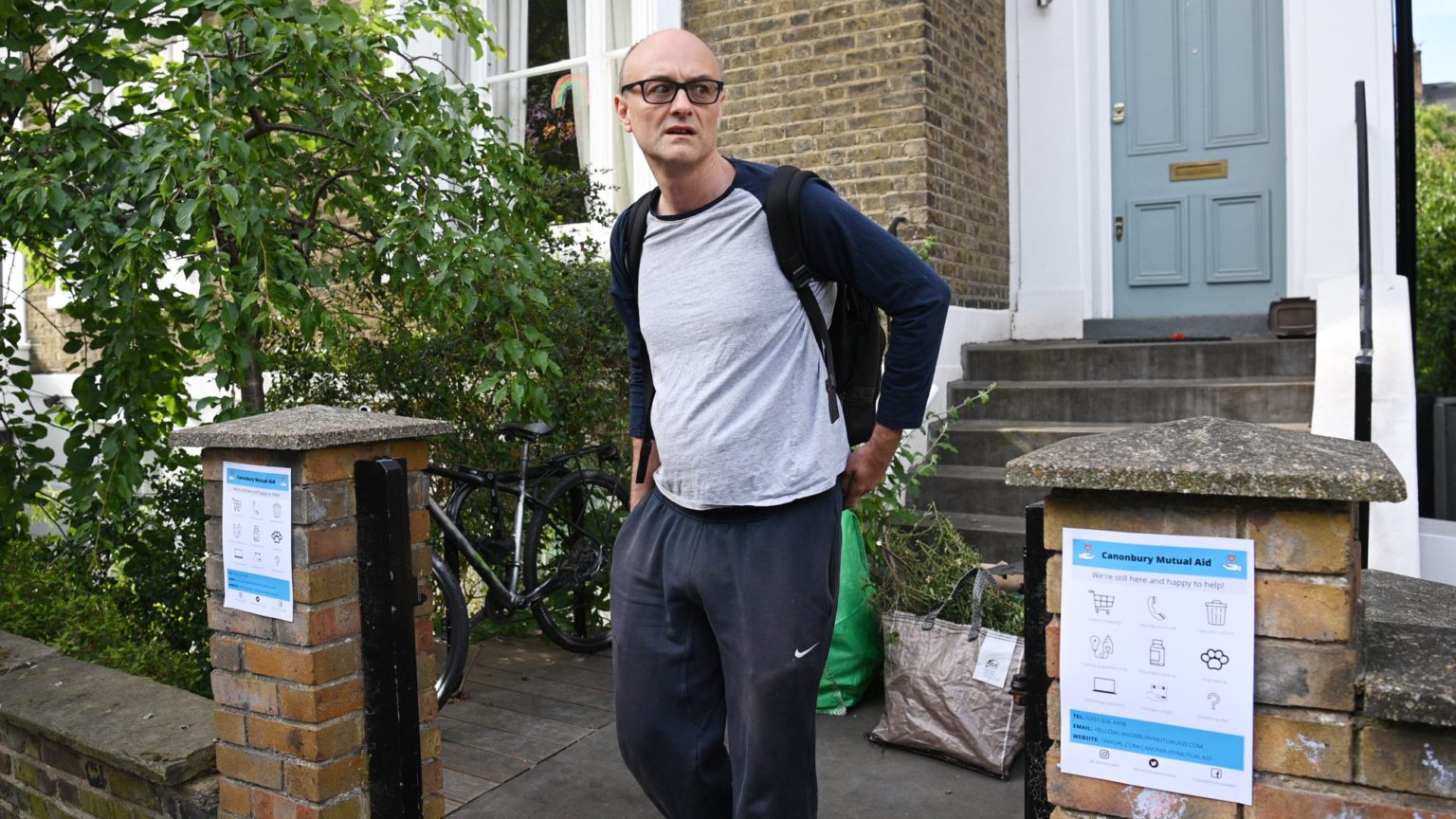 Imagine living in a country where bishops intrude into political life and demand that the elected leader ‘repent’ for his political sins. Or a country where former police chiefs make televised denunciations of elected politicians and their ‘sophistry’. Or a country where incredibly wealthy women offer financial reward to rogue civil servants who are seeking to undermine the democratically elected government. Or a country where a mob turns up at someone’s home denouncing him as ‘demonic’ and shouting at him about death, and the political class doesn’t condemn such behaviour but rather cheers it on.

Well, if you’re reading this article in the UK, you already live in this country. This is Britain in 2020, in the grip of Cummings Derangement Syndrome. The ceaseless, media-manufactured hysteria over Dominic Cummings’ trip to Durham, and whether it broke the lockdown guidelines instituted by his own boss, PM Boris Johnson, has been an extraordinary affair. We are told, constantly, that Cummings has committed an unforgivable moral and political transgression, and yet the evidence continues to pile up, hour upon hour, that a far greater transgression is being committed by the anti-Cummings mob. Their behaviour threatens democratic norms and reasoned public discussion far more than a car journey during lockdown ever could.

All the things described above have actually happened. More than a dozen bishops denounced Boris’s defence of Cummings as ‘risible’. One, the bishop of Manchester, went further, suggesting that the Church of England should stop working with the government on tackling the pandemic until Boris shows ‘clear repentance’, including by sacking Cummings. Repent, repent! The arrogance of these men and women of the cloth is extraordinary. Do they not know what century it is? The days when the self-styled representatives of God could tell the democratically elected representatives of the people what to do are long gone.

The use of such emotional blackmail – suggesting a withdrawal of the CofE’s support for the government’s efforts against coronavirus until Boris repents for his sins – shows what a morally unserious institution the church has become. Having jettisoned traditional scripture and Biblical thinking, in favour of embracing the cult of relativism and a happy-clappy rainbow non-judgementalism, the church has been reduced to raging against Dominic Cummings to try to show that it still has a semblance of a moral core. Dom is their devil substitute. It’s pathetic, and what’s more it is a threat to democracy. We don’t want the church in politics. Stick to religion, leave politics to the people.

Then there’s the cops shoving their beaks into democratic political life. The former chief of Durham Police got the BBC and Twitterati hot under the collar when he went on air to denounce Boris for his ‘sophistry’. He also echoed the bishops’ medieval interference in political life by slamming Cummings for being ‘completely unrepentant’. He cited his ‘40 years of police experience’ not only to judge that what Cummings did was wrong – which is okay-ish, I guess – but also to make a political judgement. It is also wrong, he said, for Boris and his ministers to put so much effort into ‘sav[ing] the skin of an adviser’.

I’m sorry, but decades of police experience do not give your political views extra weight. On the contrary: we do not want cops or former cops on TV instructing politicians on their choices and their behaviour. And yet the former police chief was cheered by the left, who would have furiously taken to the streets – well, to Twitter – if a cop or former cop ever went on TV to rage against Jeremy Corbyn. Mind your business, police. Solve crime.

As to the wealthy woman offering financial reward to a rogue civil servant: that was JK Rowling. The feverishly anti-Brexit and anti-Boris Harry Potter creator, worth a sweet £795million, reacted with glee when a civil servant denounced Boris, Cummings and the rest as liars on the official civil service Twitter account. In fact, armies of Boris-bashers reacted with joy when this member of the unelected bureaucracy publicly denounced a government elected by millions of people, including millions of working-class people horrified at what the Labour Party had become under the influence of Corbynistas on one side and wealthy, metropolitan, Brexit-hating elitists, not unlike Ms Rowling, on the other.

Rowling responded to the civil service’s removal of the rogue tweet by saying: ‘When you find out who it was, let us know. I want to give them a year’s salary.’ Because she’s really rich, you see? In a normal era, this might be viewed as financial inducement to members of the unelected bureaucracy to publicly undermine elected politicians. But we don’t live in normal times. And so Ms Rowling was celebrated and retweeted and congratulated for flashing her cash to the end of rewarding an anti-democratic civil servant.

On top of this, we’ve seen mobs of people turning up to Cummings’ house. Not only the baying media, but also people from around Islington, where Cummings lives, who have been barking insults at the Cummings family, waving placards denouncing Cummings as ‘demonic’, and writing anti-Cummings graffiti on the street. Some have reportedly thrown eggs at Cummings’ car. Led By Donkeys, the middle-class reactionaries who devoted themselves to undermining the enactment of Brexit over the past couple of years, turned up on Cummings’ street with a truck showing images of sick people and people talking about death. With not a single thought for Cummings’ privacy or for his four-year-old kid.

This is possibly the most serious transgression in Cummings Derangement Syndrome. We have allowed people’s private homes to become sites of political protest and political anger. And far from being criticised, it is being green-lighted. The local MP, Emily Thornberry, cheered the mob. ‘The people of Islington South & Finsbury can always be relied on to say it as it is’, she tweeted. There have been virtually no criticisms of the crowds outside Cummings’ house from the political class or the Cummings-loathing media.

What is most striking about this is that the people who are supporting, or just not commenting on, the transformation of Cummings’ private home into a site of political fury are the same people who have spent the past few years telling everyone to mind their political language and curb their political emotions before a politician ends up getting hurt, as Jo Cox did. Indeed, when Boris Johnson used the phrase ‘Surrender Bill’ in parliament last year – to refer to proposed legislation that would have made it impossible to have a No Deal Brexit – he was accused of inciting violence. Yet now Cummings’ home is targeted, he and his wife are being demonised on a daily basis, their kid has to brave an army of yapping hacks and paps every day, and these people are saying nothing. Actually, they are – they’re loving it.

Cummings Derangement Syndrome adds up to a serious breach of democratic and public norms. Bishops in politics, people calling the police about political advisers they don’t like, the celebration of civil service disobedience, the transformation of the private sphere into a political circus… none of this is normal, none of it is good. Cummings’ bending of the lockdown rules pales into insignificance in comparison with all of this. To see the wrongness of it, just imagine if Corbyn became leader and elements of the church, the civil service and the body of armed men that make up the state’s core started publicly to denounce him. Do you think the left would cheer that? I hope nobody would.

Why is this happening? How do we explain the casualness with which these political transgressions have been committed? Answering this question cuts to the heart of Cummings Derangement Syndrome. The intense, sometimes unhinged media and political hatred for Cummings has nothing to do with that car journey to Durham. Rather, what we have here is the wounded old elite, the managerialists and technocrats and pseudo-liberals who have been so rattled and even defeated by democratic developments in recent years, finally finding an outlet for their fury. Their loathing for Cummings is directly proportionate to their sense that their political power and cultural dominance have been seriously called into question in the Brexit era. Cummings is the voodoo doll through which they express their pain at the massive democratic shifts in public life that have undermined their neoliberal, PC agendas.

This is what we are really witnessing right now: not evil Tories doing arrogant things, but the intensification of the meltdown of the democratically rejected cultural elites. That’s the great irony in Cummings Derangement Syndrome. His haters trot out the line that ‘It’s one rule for the elite and another for everyone else’, when the fact is they are using this controversy to try to restore their elitism; they are using it as yet another platform to reassert their cultural values against a throng they loathe and an elected government they despise. Do not for one minute be fooled by the phoney anti-elitism of the Cummings haters, because their increasingly mad campaign against Cummings is precisely an attempted revenge of the elites that the people rejected.