The Italian crisis is only just beginning

The EU’s rescue plan is utterly insufficient for dealing with Italy’s mounting debt. 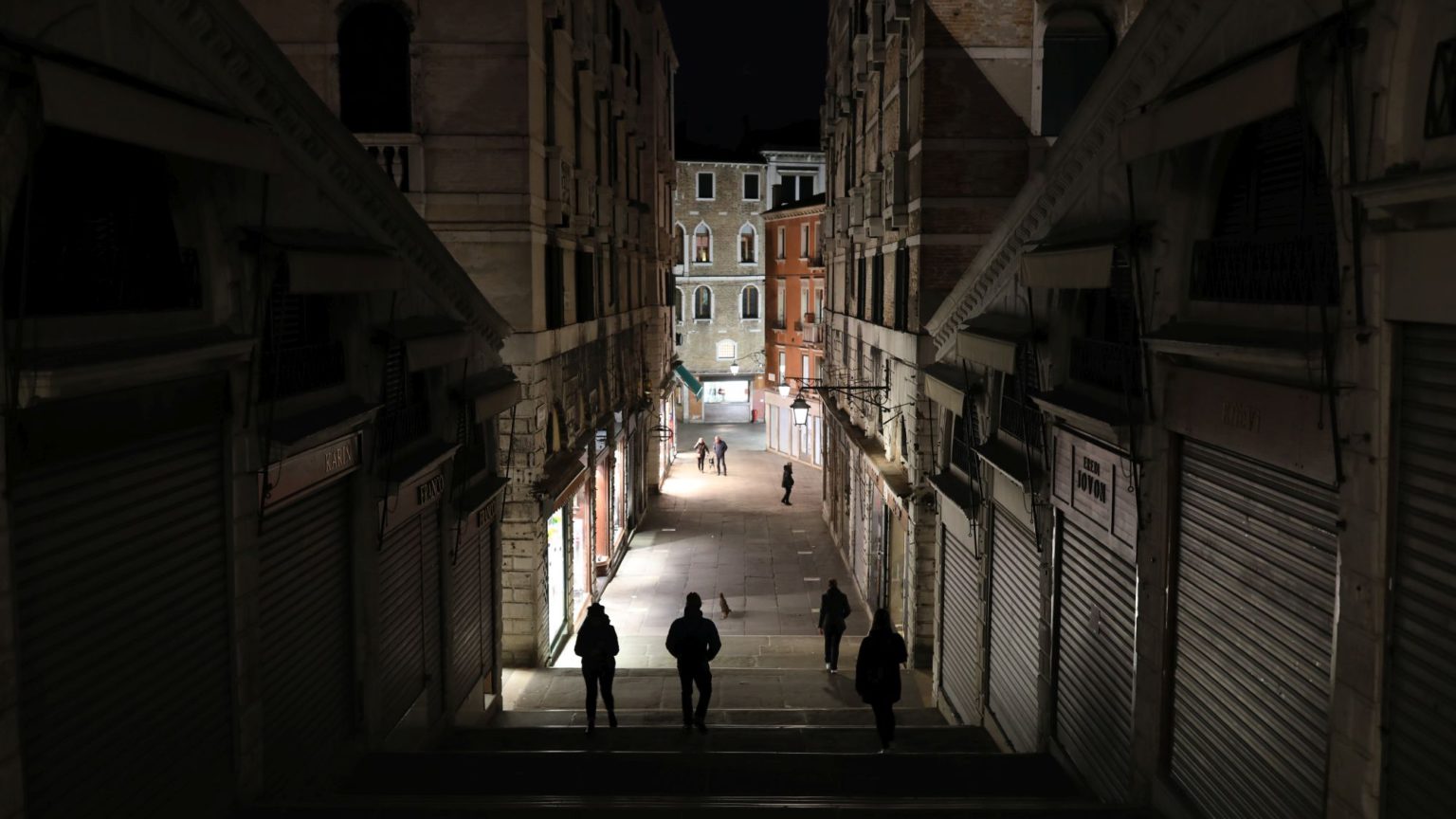 Following a video conference of EU leaders last week, discussing a proposed rescue plan for Europe’s Covid-stricken economies, Italy’s prime minister, Giuseppe Conte, was in high spirits. ‘Great progress, unthinkable until a few weeks ago’, he said in a statement. The BBC’s headline cheered the ‘Huge economic rescue plan agreed by EU leaders’. But while the announcement may provide some temporary political relief, the Italian economy and the EU are nowhere close to being saved.

What was notable from the meeting was what was not agreed. Take the issue of whether the fund should provide grants or loans to struggling member states. For Conte, grants ‘are essential to preserve the Single Market, a level playing field, and to ensure a symmetric response to a symmetric shock’. In the past few weeks, Italy, Spain and France had pushed for grants to be funded through the EU, while Germany, Austria, Finland and the Netherlands insisted only loans should be financed. The national disagreements were so profound that, before the conference, it was decided that there would be no joint statement afterwards, as this would require the approval of all 27 EU member states. Instead, a statement was issued by European Council president Charles Michel.

European Commission president Ursula von der Leyen has admitted that the EU still needs to ‘find the right balance between grants and loans’. The Commission has suggested that the fund should be worth €2 trillion, but EU leaders have yet to agree on a precise figure.

The recovery fund is planned to be included in a revised Multiannual Financial Framework (MFF) – the EU’s seven-year budget which comes into force on 31 December 2020. Even prior to the coronavirus crisis, EU leaders had major disagreements over the MFF. Adding the recovery fund to it is likely to exacerbate tensions further. The only precise change to the MFF that has been made explicit by von der Leyen is that the ceiling for contributions from member states should rise from the current 1.2 per cent of Gross National Income to around two per cent for the first two or three years of the budget, to allow the EU to make loan guarantees. In addition, last week’s conference confirmed the decision made by the Eurogroup earlier this month that a safety net of €540 billion would be released through existing EU mechanisms from 1 June.

The size of these funding changes and the lack of precision leaves huge doubts that this rescue plan will come anywhere close to helping Italy cope with the unfolding economic crisis and, in particular, with its mounting public debt. In December 2019, Italy’s debt was €2.4 trillion or 135 per cent of GDP – the highest in the Eurozone. Last Tuesday, Italy’s budget watchdog forecasted a decline in GDP of 15 per cent in the first six months of this year. The government’s Economic and Financial Document foresees public debt rising in 2020 to nearly 156 per cent of GDP. But if debt rises and output falls more than is projected, Italy’s debt-to-GDP ratio could balloon to around 200 per cent.

It is not impossible to service such a large debt – Japan’s public debt to GDP ratio is projected to reach 240 per cent this year. But Italy’s current economic crisis follows decades of weak growth and productivity. That makes servicing the debt all the more difficult and expensive.

This is why Conte had previously pushed so hard for so-called corona bonds, which would allow struggling Eurozone members to borrow money at much lower prices, in line with those paid by the richer and more frugal northern countries. This idea is now dead, as the rescue plan will operate through the MFF and other existing EU mechanisms.

There is a very real possibility that Italy could default on its debt. This would result in widespread bank failures as much of the sovereign debt is held by Italian banks. It would also threaten a wider financial Eurozone crisis, given the size of Italy’s economy and how many EU financial institutions and companies are deeply involved in it. Default could even lead Italy to leave the EU and the Eurozone.

It would be possible to manage an Italian default within the EU and the Eurozone, but the downsides are considerable. In such a scenario, Italy’s debt would have to be restructured and its bonds given a ‘haircut’ to give the state enough money to nationalise the banks to prevent the loss of savings. Debt restructuring was incredibly painful in Greece, but it could be possible through the intervention of the European Central Bank (ECB).

Indeed, despite all the talk about funding Italian debt through the MFF, the ECB has been, and is likely to continue being, the key EU institution dealing with Italian debt. The ECB has already broken its own rules on bond purchases to prop up Italian bonds. Normally the ECB only buys a country’s bonds in proportion to the capital it contributes to the bank. But since 18 March, when the ECB announced its plans to extend quantitative easing by purchasing €750 billion of bonds, it has bought €30 to €40 billion worth of Italian bonds. This is more than double the normal maximum implied by Italy’s capital contribution, according to Goldman Sachs analysts. As long as the ECB continues to buy Italian bonds in the short-term, the interest on Italy’s debt is easier for Italy to pay.

The ECB has also managed to stave off a potentially devastating downgrading of Italy’s creditworthiness for the time being. Italy’s credit rating currently sits two notches above junk status. On Friday, credit-rating agency Standard & Poor left this rating unchanged, though it said Italy could be downgraded if borrowing costs rose further. Under normal circumstances, a junk credit rating would trigger investors to sell bonds. However, on 21 April, during an unscheduled meeting of the ECB’s governing council, it was decided that the ECB would let banks post collateral that had been downgraded to junk during the coronavirus outbreak. Instead the ECB would apply each asset’s credit rating as it was on 7 April. As Reuters reports, this is widely viewed as the first step towards the ECB buying junk-rated bonds – another unprecedented intervention.

Ultimately, in the longer term, the ECB can only devise limited measures to shield Italy’s debt from the ratings agencies. It cannot continue buying Italian bonds without a further injection of funds or another solution.

Another source of funding that has been discussed is the controversial European Stability Mechanism (ESM). Unlike the grants Italy is calling for, ESM funds come with strict conditions attached. Prime minister Conte had initially ruled out applying to the ESM . But within Italy’s governing coalition, opposition to the ESM has dissipated. The Democratic Party had always been in favour of ESM funding, while the Five Star Movement has been more cautious and divided. On Friday, Italy’s lower house of parliament voted on a motion stating that the government will not use ESM for the coronavirus emergency under any circumstances. That motion was defeated by 216 against and 119 in favour, potentially paving the way for a climbdown from Conte and an acceptance of the ESM.

The crisis has done serious damage to the EU’s reputation among the public in Italy. According to polling by SWG, public confidence in the EU has fallen from 42 per cent in September 2019 to just 27 per cent in April 2020. But despite this, none of the major political parties has managed to tap into this growing Euroscepticism. For instance, the right-wing populist League party has dropped in the polls, from an average of 31 per cent in January to 26 per cent last week. Although its leader, Matteo Salvini, advocated leaving the Euro during the 2018 election, he has so far lacked the courage to capitalise on the public’s anger. This could change, particularly if hardship increases and the EU rescue package continues to be insufficient.

The pressure on Conte to accept an ESM bailout is only likely to mount as the economic crisis deepens. A General Election is not due until 2023, and Conte, who has never been elected, has consistently shown himself to be more responsive to the EU than to the voters.

Last week’s rescue-plan announcement gives Conte some temporary political relief. But huge doubts remain over whether the EU can postpone another Eurozone crisis for much longer. What is needed in Italy is a serious movement in opposition to the EU.