The Remainer elites are the true bigots of Brexit Britain

On Brexit Day on Friday we witnessed just how much Remainers loathe ordinary people. 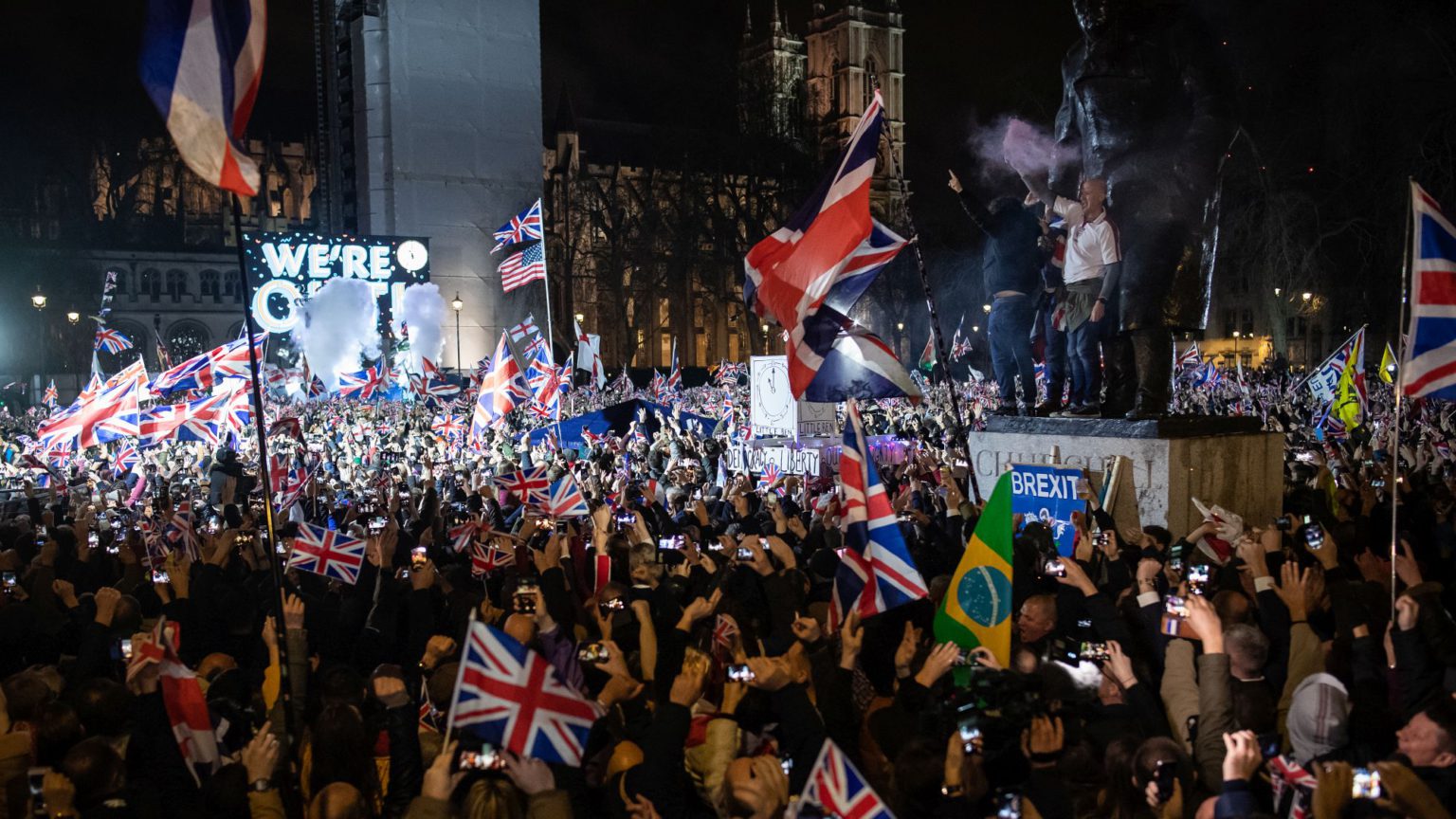 Everyone from Sadiq Khan to Remoaner newspaper columnists spent last week fretting that there would be an outburst of hatred and chauvinism on Brexit Day on Friday. And they were right, there was. But it didn’t come from Leavers, the vast majority of whom celebrated our leaving of the European Union in good, lively spirits. No, it came from bitter middle-class Remainers. Anti-Brexit people in the worlds of culture and commentary unleashed some of the vilest hatred of recent times on Friday night. Their masks fell and we saw what many of us suspected to be the case – that behind the Remoaner facade of cosmopolitanism and tolerance there lurks an extreme, Victorian-level contempt for ordinary people and their stupid voting habits.

The tone was set by Tom Peck, political sketch writer at the Independent. He resuscitated the pre-democratic fashion for depicting the lower orders as animal-like savages, as not fully evolved, by describing the pro-Brexit gathering in Parliament Square as ‘a knuckle-dragging carnival of the irredeemably stupid’.

Knuckle-dragging. We all know what that means. Ape-like. Lacking in true sentience. Not properly human. Isn’t it striking that Alastair Stewart can lose his job merely for mentioning the word ape, in an entirely non-targeted, non-racist way, in a Twitterspat with a black gentleman, while Peck is cheered and celebrated by his fellow Remoaners for implying that a vast gathering of largely working-class people had the demeanour of apes. This is because the one group of people you are perfectly at liberty to hate in our woke era is the white working classes: thick, knuckle-dragging scum.

Indeed, the word ‘thick’ was trending on Twitter in the hours after the Brexit Day celebrations as armies of hateful Remoaners took to the web to express their disgust with the lower orders. They feverishly shared videos of mostly older working-class people being interviewed by news channels and not being as articulate as they might have been. Absolutely no consideration was given to the fact that many of these people – unlike the luvvies laughing at them and mocking them – are not used to the pressures of TV lights and cameras. No, they all had to be denounced as ‘thick as mince’ (to quote the editor of the Canary) plebs who sum up the bovine stupidity of the hordes who backed Brexit.

Others contented themselves with the elitist sport of insulting the Brexit Day interviewees. They jeered at the men and women who lack their own clipped tones and thesaurus-standard command of the English language. They called them ‘thick as fuck’, dumb, a sorry image for this once great country. They look and sound like people who have had ‘Nigel Farage’s wet dreams piped directly into their fucking brains’, pushing out ‘all capacity for rational thought and normal human speech patterns’, as one online proponent of this nasty class hatred put it.

Lacking ‘normal speech patterns’? What they mean is that these people – with their working-class London and northern accents – don’t sound like us. They don’t look like us, either. In his hateful sketch of the working-class crowds in Parliament Square, Tom Peck expressed his horror at seeing men without their shirts (nothing horrifies the middle classes more than shirtless working men – see also their disgust with the kind of people who attend football matches). He also revelled in telling us that they virtually couldn’t read – even when the lyrics of ‘Rule Britannia’ flashed up on the big screen, it was all ‘infinitely beyond them’, he sneered.

Luvvies were out in force spreading hatred, too. All they could see in London and elsewhere were swarms of racist scum. Kathy Burke, in a flagrant insult to the working classes from which she and I come, titillated her fawning middle-class followers by saying: ‘Have a lovely day you stupid racist wankers.’ Eton-educated poet Musa Okwonga bemoaned the ‘growing nastiness’ of British society (funnily enough, he wasn’t referring to the class hatred unleashed by his fellow Remainers). Irvine Welsh, having for years provided the London literary set with the underclass moral pornography of his novel Trainspotting, gave them another thrill by sharing a video of working-class people in Warrrington celebrating Brexit and saying ‘it’s like we have regressed 80 years + already’. His followers took the bait. The ‘average cultural experience’ of these people is a ‘donkey ride on the Blackpool seafront’, one said.

Everywhere one looked on Friday night, on Brexit Day, there was hatred all right. Remoaner hatred. Hatred for the masses. Hatred for the not perfectly articulate working classes. Hatred for northerners. And of course, as many of us know, this hatred has been brewing for a long time. Indeed, the man who has done perhaps more than any other Remoaner to paint Brexit voters as thick, radio presenter James O’Brien, chided his fellow Brexitphobes for being shocked at the ‘ignorance’ on display on Brexit Day. ‘This shouldn’t be a surprise’, said the privately educated broadcaster who makes his living from mocking the state-educated people who phone his show.

What happened on Friday is this: the pretence of Remainer tolerance fell apart. There had been cracks in it for a long time. Many of us could see the anti-democratic, anti-masses impulse that fuelled hardcore Remainer activism. We saw it in Matthew Parris chastising the political class for ‘lick[ing] the boots of the mob’. We saw it in Paul Mason’s hateful commentary on ex-miners ‘sitting in the corner of the pub calling migrants cockroaches’. We saw it in the ceaseless commentary about ‘low-information’ voters and thick old people who should hurry up and die, and in the petitions and marches designed to overthrow the largest democratic vote in UK history. By its definition, Remainerism – as a post-referendum ideology and cultural identity – was intolerant: intolerant of democracy, intolerant of voters, intolerant of the uneducated. But on Friday night that became clear. Perhaps the reality of Brexit finally demolished Remoaners’ ‘liberal’ posturing, revealing the stark, ugly reality of their contempt for the crowd.

There are two important lessons to take from this extraordinary display of chauvinistic intolerance towards working-class people. The first is that Remainerism is far more intolerant than the movement to leave the EU. Indeed, a recent poll found that on various issues – from climate change to gay marriage to immigration – Remainers are less tolerant of people who disagree with them than Leavers are. Given that bigotry fundamentally means intolerance towards those whose beliefs differ to one’s own, it is clear that bigotry is more pronounced in Remain camps than in Leave camps. And the second sobering lesson to take from Friday’s orgy of Remoaner hatred is that Brexit – as a phenomenon, as a battle over values – is not over. Not by a long shot.

All those calling for the nation to come together now that Brexit is done (kind of) are kidding themselves. It isn’t going to happen and it shouldn’t happen. The divide is too deep, the chasm in values too wide. On one side we have vast numbers of people who have a deep moral attachment to the ideals of nationhood and solidarity, and on the other we have the narcissistic individualism and tendency towards intolerance of the out-of-touch cultural and intellectual elites. This is what Brexit exposed. And its exposure is a very positive thing. We now know how divided this country is. We now know how much the elites loathe ordinary people. We now know that being pro-EU was largely a cover for being uncomfortable with democracy and horrified by the masses. It’s good that we know this. And it’s important that we realise that such vast, clashing views of politics, life and the world will not be mended for years. Perhaps decades. The battle for Brexit is largely won; the battle for the future of Britain has only just begun. Those of us who hate intolerance and love democracy have our work cut out for us.