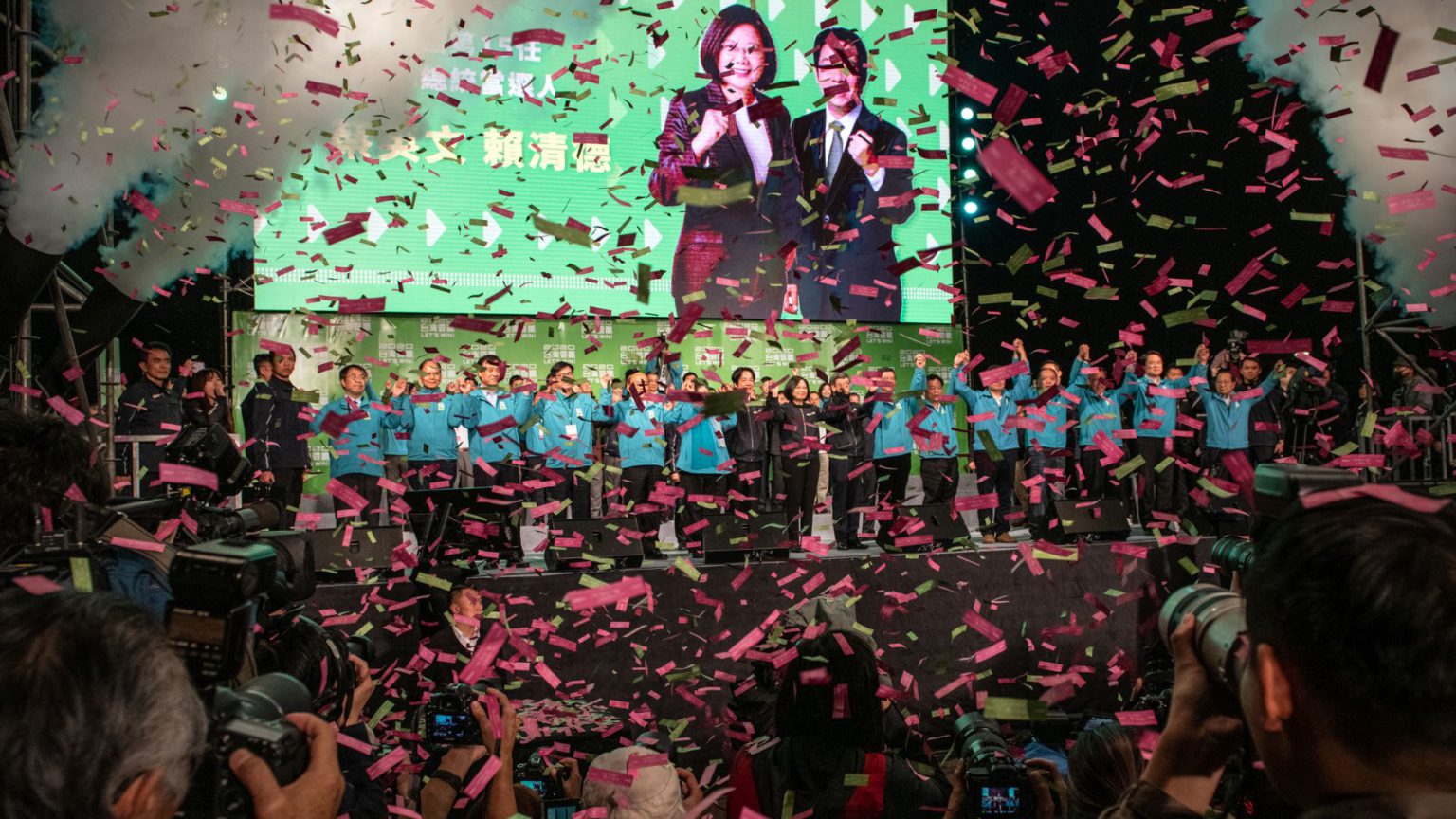 It looked like it was coming and it did. On Sunday, Taiwan’s incumbent president Tsai Ing-wen, leader of the Democratic Progressive Party (DPP), trounced her pro-Beijing rivals, the Kuomintang (KMT). On a ticket of preserving democracy against the plans of China’s president Xi Jinping, the DPP took 57.1 per cent of the vote – among an electorate of 19million, 8.2million votes against the KMT’s 5.5million. On a buoyant turnout (74.9 per cent), this was the largest backing given to a single party since Taiwanese presidential elections began in 1996.

The election result, declared in the capital Taipei, marks a big change in Tsai’s fortunes. In 2018, her labour-and-pensions reforms to Taiwan’s long-hours economy were received so badly she nearly resigned.

On 2 January 2019, however, Xi, the Chinese president, dramatically boosted Tsai’s chances. He said Taiwan had to and would be unified – if necessary, by force – with the People’s Republic of China under the Hong Kong formula of ‘one country, two systems’. Almost immediately, Tsai replied, attacking Xi and her domestic rivals for their longstanding collusion, particularly around the old and ambiguous ‘One China’ agreement, known as the 1992 Consensus, that had been drawn up between Beijing and the KMT. Then, on 3 April, Xi’s stooge in Hong Kong, Carrie Lam, given an excuse by a Hong Konger’s murder in Taipei, introduced plans to allow criminal suspects to be extradited to China. This alarmed not just Hong Kongers, but many Taiwanese, too. After 9 April, when a million Hong Kongers marched in protest at China’s extradition plans, Tsai’s fortunes rapidly improved.

Of course, there was a touch of opportunism to Tsai’s subsequent latching on to Hong Kong’s pro-democracy movement. Indeed, just as the US Congress offers hollow support for the Hong Kongers, so Tsai, a firm supporter of US militarism, is pretty much obliged to tweet in favour of and offer sanctuary to Hong Kong dissidents.

Nevertheless, Tsai’s election victory was an unmistakable endorsement of Taiwan’s sovereignty. As in its many bloody sacrifices before the end of martial law in 1987, the Taiwanese people put politics above economics. In his campaign, Tsai’s opponent, Han Kuo-yu, mayor of Taiwan’s second city, the southern port of Kaohsiung, sucked up to China and also promised Taiwan growth through a deeper economic partnership with it. But the Taiwanese preferred to run their own affairs.

It was a decision made in full knowledge of the damage China can do to Taiwan. China’s conduct with Taiwan is oppressive. Beijing ended contact with Taiwan after Tsai was elected in 2016. It then reduced the number of states recognising Taiwan from 21 to 15, imposed heavy limits on mainland tourism bound for Taiwan, and performed more than the usual amount of scary military manoeuvres in the Taiwan Strait. But Taiwanese youth, in particular, came out strongly in favour of upholding Taiwan’s relatively recent – and relatively fragile – democratic traditions.

History has made intergenerational differences quite pronounced in Taiwan. On losing the Chinese civil war, the reactionary Chinese nationalist leader General Chiang Kai-Shek fled to Formosa, as Taiwan was then called, in 1949, establishing a KMT regime of martial law that lasted until 1987. To this day, the KMT, reflecting the anti-Communist hopes of its founder, defines Taiwan in the old sentimental style – as part of a greater China. But in an irony that’s widely noted, passing decades have made the KMT a big fan of the People’s Republic. And, before Tsai reformed state pension schemes, a middle-aged and older generation of civil servants, teachers and the military benefited from the largesse of the KMT, through a special martial-era pension provision that gave them interest rates of 18 per cent a year. By contrast, Taiwan’s youth was repelled by the KMT’s fondness for Beijing and by the party’s distaste for modern lifestyles (gayness and gay marriage included). Inspired by the example set by Hong Kong, by ties with its democracy movement and by Hong Kongers visiting for the election campaign, young Taiwanese knew they had everything to lose in a future dominated by Beijing.

Predictably the Chinese regime condemned the result just as much as the US state department cheered it. That highlights how the election was not just a blow for democracy, but a blow against Beijing – one at least as significant as that dealt China by Hong Kong.

It is not just that Taiwan’s population, at 23million, outweighs Hong Kong’s (7.5million). Taiwan has universal suffrage, a constitution, and its own armed forces. Its economy is much bigger. Its integration with the Chinese economy is arguably as significant as that of the Special Administrative Region. In the Taiwan Semiconductor Manufacturing Company (TSMC), Taiwan has not just an emblem of its strong R&D, but a key supplier of chips worldwide. TSMC sells its wares not just to America’s Apple, but also to the US’s most hated IT company – China’s Huawei. No wonder Washington has already demanded that TSMC cease exports to Huawei, even though these account for a sizable 10 per cent of its business.

Through pacts, America and Australia are meant to rally to Taiwan’s defence. Some argue that a vastly superior China could overwhelm Taiwan in a day with cyber-measures and military force. Others counter, arguing that Taiwan’s thin beaches, mountainous terrain, tunnels for 200 of the country’s jet fighters and local resistance would make an attempt at annexation turn out to be a big loss of face for Xi.

Whatever the case, the internationalisation of the Taiwan issue is bad news. China certainly has questions to answer, even if the London Financial Times prefers to call the election result ‘dangerous’ for the region. At the same time, the Taiwanese should rely as little on the tender mercies of America as Hong Kongers should.

More than 70 years on from Chiang Kai-shek, Tsai’s election victory confirms that the world’s largest Chinese-speaking country outside China, separated from its massive neighbour by only 130 kilometres of sea, has nevertheless become a nation in its own right. As Austin Williams wrote in spiked back in October, it is in Taiwan that the next twists and turns of East Asia will be played out.

Diplomatically, an armed crackdown in Hong Kong would be Pyrrhic for China; diplomatically, economically and in terms of casualties, any victory for the People’s Liberation Army against Taiwan, like anybody’s victory on the Korean peninsula, would be a catastrophe. East Asia’s special and heavily disputed maritime geography and turbulent history, China’s rise and America’s decline, the arbitrariness of international affairs today: all these make conflict over Taiwan a danger to us all.

The Taiwanese elections show that a new stage has been reached. For Xi Jinping, the writing is now on the wall – from the Uighurs in Xinjiang, through the protesters of Hong Kong, and now on to the electorate of Taiwan.