These eco-poshos are full of loathing for the aspirational poor. 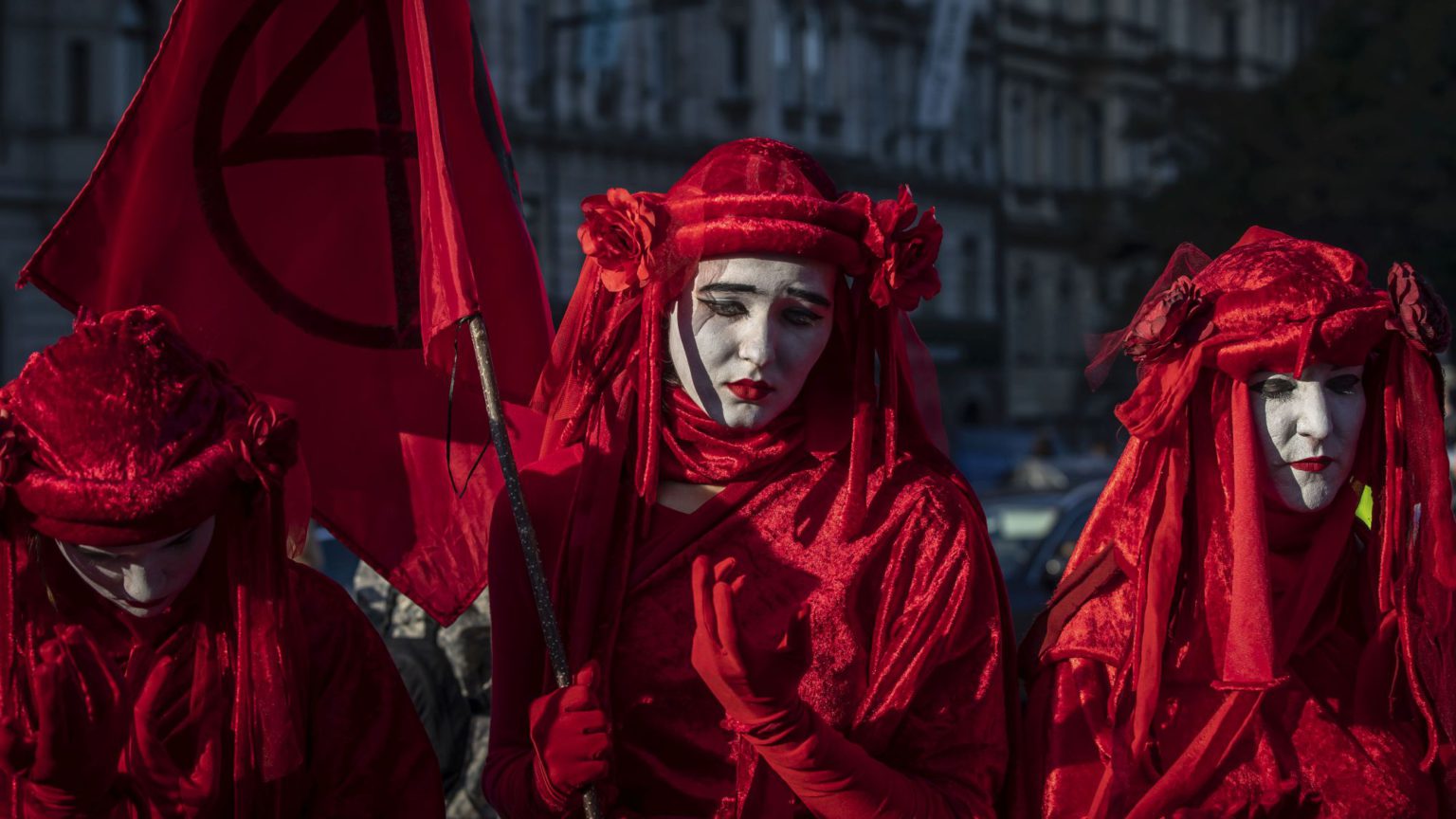 We need to talk about the class dynamic in Extinction Rebellion. Surely everyone can see it. This eco-alarmist cult includes in its ranks a Belgian princess, the granddaughter of a baronet, and a public-school Guardianista descended of aristocracy.

And who do these poshos target? The working-class men of Smithfield meat market. The working families of Billingsgate fish market. And the good people of London just trying to get to work or to jet off on a much-needed break from the vagaries of life in capitalist society. These plummy millenarians can use all the pseudo-progressive language they like – the rest of us know that the XR uprising is class war waged by eco-elites against the apparently unenlightened little people.

Extinction Rebellion gets posher by the day. Last week it was announced that the 1,300 agitators arrested in London included Princess Marie-Esméralda of Belgium, daughter of Leopold III. ‘The climate emergency calls on all of us to put pressure on governments to act with urgency’, she said.

A little further down the aristocratic scale there is Tamsin Omond, the granddaughter of a baronet. She’s a former member of the implacably snobby anti-flying group Plane Stupid, whose website once denounced the ‘enormous growth in binge-flying’ and in particular the ‘proliferation of stag and hen nights to Eastern European destinations chosen not for their architecture or culture but because people can fly there for 99p and get loaded for a tenner’. Eurgh, those frightful oiks travelling around the world, how grotesque.

On the first day of Extinction Rebellion’s takeover of central London, Ms Omond got married to her long-time girlfriend on Westminster Bridge, which the middle-class crusties had of course shut down to the plebs… I mean, to the general public. It was like an aristocratic colonisation of the public square. So what if you paupers need to get to work, or to St Thomas’s hospital, or to an airport? Don’t you know a daughter of extreme privilege is getting married on the bridge?! Know your place, hoi polloi.

Everywhere you turn on an XR protest you’ll hear a plummy accent or see a Hampstead-and-Highgate mum glueing herself to a bus to try to raise the awareness of the braindead commuters therein. One of the key speakers at XR protests has been George Monbiot, educated at Stowe (£36,000 a year) and descended from the Salmon family that owned the vast cake-and-tea empire J Lyons. ‘Let them not eat cake!’, is the cry of these eco-aristos who essentially want to deny the masses the thing that they themselves have long enjoyed – wealth and comfort.

What is most striking is who this silver-spoon brigade is protesting against. Mr Monbiot and various middle-class vegans descended on Smithfield meat market to shame the largely working-class people who make their living there. As one of the Smithfield workers told LBC, thanks to this ‘happy-clappy mob’ and their interference with Smithfield, ‘I’m not going to be able to pay my bills’. In any other era, if posh people prevented the less well-off from making a living, we’d call it class war – now we call it environmental campaigning.

When these wealthy greens got bored of mocking meat workers, they headed to London’s Billingsgate fish market to take the piss out of its equally hard-working traders. In many coastal English towns and working-class parts of East London, there is a genuine concern among ordinary people that the fishing industry is in trouble. They want it to be propped up, so that they can continue to make a living. Yet in waltz the Oxbridge know-alls of Extinction Rebellion to tell the fish-gutting rabble that they are wrong and that they should be put out of business. What a nasty mob.

From its invasion of meat and fish markets to its blockage of airport entrances to its hectoring of everyday commuters who apparently aren’t paying enough attention to the ‘climate emergency’, this eco-aristocracy constantly attacks ordinary people. It openly calls for their lives to be made harder. XR’s demand that carbon emissions be cut to ‘net zero’ by 2025 would lead to untold job losses, an end to driving, and virtually no more flying. Indeed, XR types call for massive taxes on flying, which would have the impact of pricing the non-rich out of the skies.

Stowe’s star green activist George Monbiot put it best in his old book Heat. Environmentalism, he said, is ‘a campaign not for abundance but austerity, not for more freedom but less…’. It is a campaign ‘against other people’, he argued. Such honesty. With XR, we can take it a step further: environmentalism is now very clearly a campaign against ordinary people by wealthy people; a campaign for austerity being led by people who in many cases grew up in great privilege.

We shouldn’t be surprised. Environmentalism has long had a strong streak of class hatred. From the filthy rich David de Rothschild’s 2007 guide to living more austerely to Jonathon Porritt (the Eton-educated son of Lord Porritt) heading up Friends of the Earth; from Prince Charles’ demand that we all live more eco-meekly to Prince Harry’s shameless moaning about flying even as he takes a private jet to Elton John’s swanky pad; from Plane Stupid’s posh protests against plebs flying out of Stansted Airport to the sirs and ladies who head up the various efforts to curb population growth (shudder) – green politics has always been led by the posh, and has always been targeted at the lower orders.

This isn’t a coincidence. It is written into the very heart of the green worldview. Boil it down and this supposedly progressive movement is really just a modern version of the aristocratic, anti-modern, anti-natalist misanthropy that has been a feature of certain upper-class circles ever since the Industrial Revolution cranked into action. XR’s inconveniencing of working people’s lives isn’t a mere tactic – it is the fundamental essence of this movement that dreams of plunging us back into the poverty that we only recently escaped from.