Don’t let the law become an enemy of the people

The Supreme Court must find against the Remainers who are using the law to thwart democracy. 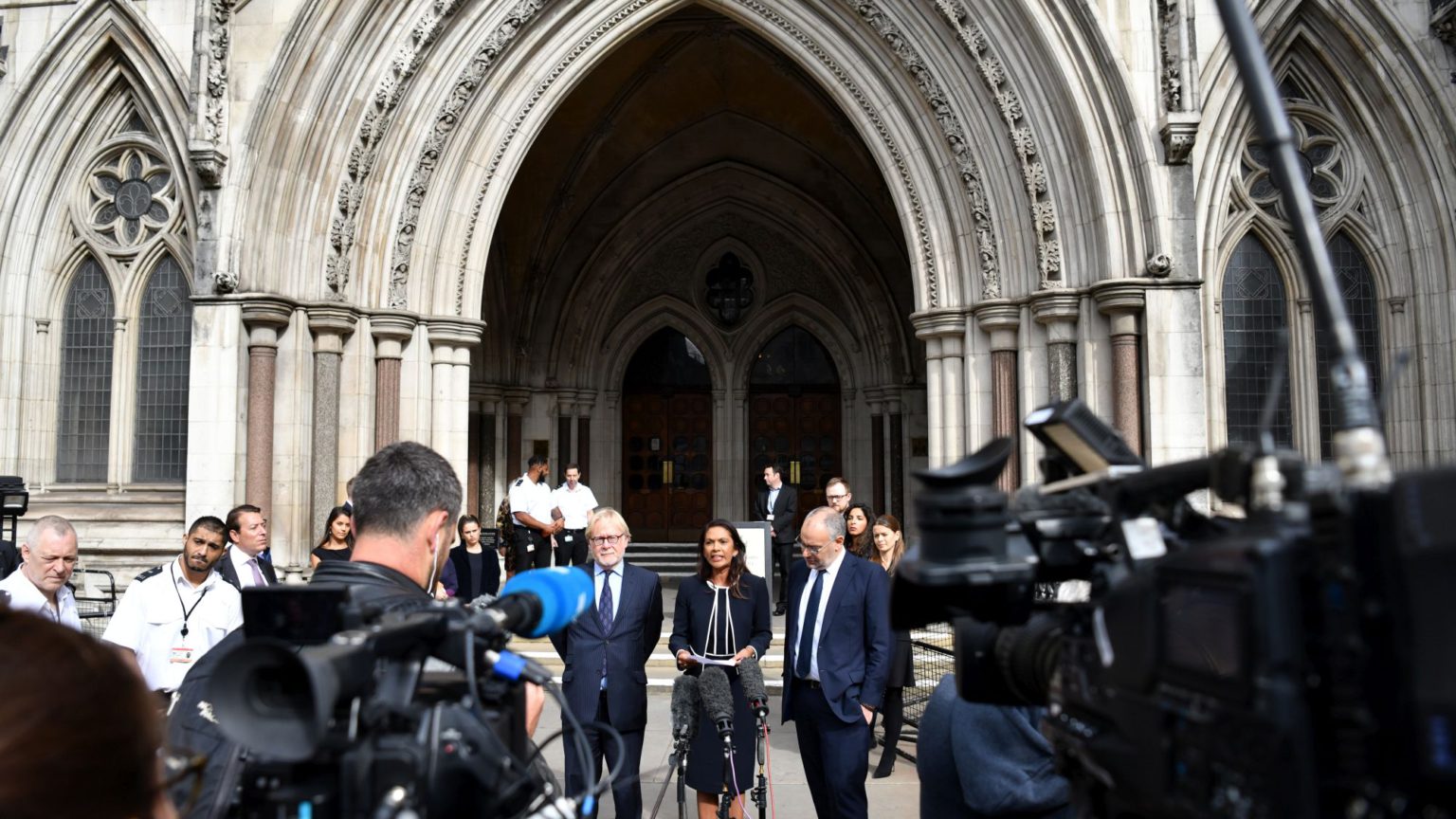 The British constitution is coming under strain. A few Remainers are using law, rather than politics, to further their objectives. But the law cannot retain its authority if it becomes partisan. This week’s Supreme Court hearing of the legal challenge to the prorogation of parliament provides the UK’s most senior judges with an opportunity to demonstrate that they have not become the plaything of anti-Brexit campaigners. Only a resolute judgment that re-establishes the boundary between law and politics can silence the voices that are calling law an ‘enemy of the people’.

Remainers have not fared well in the court of public opinion. First, they lost the referendum, then they lost the General Election of 2017, with all major parties committed to delivering the referendum result. Now Remainer MPs have voted twice in parliament to avoid the General Election that the government offered them. Yet as politics has turned against them, so these campaigners have looked to persuade the judiciary to back them. And in this regard, they have had a fair degree of success – starting with the first Gina Miller court case and culminating last week with a ruling by three Scottish judges that Boris Johnson’s prorogation of parliament was unlawful.

These anti-Brexit campaigners will be focusing this week not on winning the battle for public sentiment, but on persuading 11 judges in the Supreme Court to back their argument for a declaration that the prorogation of parliament was unlawful. This legal contest is so important that one MP, Dominic Grieve, has already claimed that if the court rules against the government, then prime minister Boris Johnson will have to resign. How extraordinary: a man heading a government seeking to deliver on a political promise to take the UK out of the European Union is being lined up by a former Tory cabinet minister for dismissal by a court. Let that sink in – the prime minister could be forced to resign because of a decision made by a handful of judges sitting in court who accede to the arguments of anti-Brexit campaigners.

That such manoeuvres are being contemplated by those seeking to remain in the EU speaks to the success they have had in the UK courts. For what they have been unable to secure with political argument, they have, up to a point, been able to secure with legal judgment. First, they persuaded British courts to rule in Gina Miller’s favour on her argument that only parliament, and not the government, could decide to trigger Article 50. This argument was motivated by the calculation that parliament was a better bet to thwart Brexit than the government because a significant majority of MPs backed Remain. But in acceding to this partisan argument, the judiciary brought much criticism on itself. The Daily Mail infamously denounced three High Court judges on its front page as ‘enemies of the people’. The Daily Telegraph carried a similar headline: ‘The judges versus the people.’

It is worth recalling that the Supreme Court decision of January 2017 was not unanimous. Three of the eleven judges dissented in strong terms for the principled reason that a nation acts on the international plane (such as when withdrawing from international treaties) via its government, not its parliament. This ‘classic rule’, noted the dissenters, had endured for centuries in the interests of ‘unanimity, strength and dispatch in the conduct of foreign affairs’. The minority also noted with admirable foresight that, ‘It is important for courts to understand that the legalisation of political issues is not always constitutionally appropriate, and may be fraught with risk, not least for the judiciary’.

In the aftermath of the first Miller judgment, I warned on spiked that ‘by turning the parliament-executive boundary into a legal issue, aggrieved individuals have been given the power to challenge the “legality” of decisions that are essentially political’. I also noted how, ‘If the door for lawyers to meddle in politics is left ajar, they will force it open.’ This is exactly what has happened. With the Brexit deadline looming on 31 October, anti-Brexit campaigners Gina Miller, Sir John Major, Baroness Chakrabarti and Joanna Cherry MP were among those who sought to persuade British courts to treat the political issue of prorogation as a legal one.

This litigation has so far met with mixed results. Gina Miller’s (second) case was given short shrift by three judges in London, who ruled that the prime minister’s decision to prorogue parliament was ‘inherently political in nature’ and that the considerations that were taken into account were ‘intensely political’. Likewise, a judge in Belfast ruled that the evidence that bore on the issue of prorogation ‘belongs to the world of politics, both national and supra-national’. The arguments, he concluded, related to ‘the very essence of what is both countenanced and permitted in a democratic society’. Accordingly, these courts in London and Belfast attempted to re-establish the boundary between politics and law that the first Gina Miller case did so much to abridge.

But in Scotland, three judges accepted the argument of anti-Brexit campaigners that the prime minister’s advice to the queen to prorogue parliament was motivated by the ‘improper purpose’ of stymying parliament. Accordingly, they ruled that the prorogation of parliament was ‘null and of no effect’. If judges can rule on the motivations of prime ministers and declare such inherently political decisions unlawful, then Britain’s ability to be judged a democracy is seriously called into question. In a democracy the motivations of governments and the consequences of their constitutional decisions are matters for parliament and the people, not judges.

With the focus of attention now moving to the Supreme Court in London, most commentators expect the Scottish judgment to be overturned. The Supreme Court needs to recognise the extent to which the law is being harmed by allowing itself to become the plaything of anti-Brexit campaigners. The authority of law, which is essential in a democracy, is harmed when law becomes partisan. Law must be the product of a consensus. Contentious issues are the stuff of politics where claim and counterclaim are aired for the benefit of the people, whose judgment should never be trumped or frustrated by lawyers in court.

The constitutional importance of separating law from politics was understood by previous generations. As the former law lord, Lord Devlin, explained in 1975, ‘law is the gatekeeper of the status quo’. He noted that there is ‘always a host of new ideas galloping around the outskirts of a society’s thought’, all of which ‘seek admission but each must first win its spurs’ for ‘the law at first resists, but will submit to a conqueror and become his servant’. These anti-Brexit campaigners are not seeking to win any spurs for their arguments; they seek instead to conquer the law in the absence of a political fight. They seek to turn law into a gatekeeper, not of the status quo, but of their own minority-held views. They must not be allowed to succeed.

It is time for the UK’s political class to recognise that the accusation that law has become an enemy of the people has kernels of truth. And that instead of silencing the voices that criticise politicised law, they should take notice. Last week was a case in point. In the wake of the Scottish ruling, government minister Kwasi Kwarteng tried to alert his political class to the dangerous territory that law has started to occupy. He noted that many people were concerned about the extent to which judges are ‘interfering in politics’. He added that ‘many people’ are ‘saying that the judges are biased’. Kwarteng supported his opinion with reference to many Leave voters.

Yet over the next 24 hours the political class of anti-Brexiteers lined up to stifle any useful debate over Kwarteng’s timely warning. Former Liberal Democrat leader Lord Campbell called Kwarteng’s comments ‘ill-judged’. Labour MP and staunch Remainer Hilary Benn dismissed the comments as ‘extraordinary’. Defence secretary Ben Wallace insisted that British judges were ‘the best in the world’.

Brexit has put the authority of law on the line. Authority is always hard to win and easy to lose. This week’s Supreme Court case provides 11 judges with an opportunity to avert law from the partisan path that Gina Miller’s first Brexit case set it on. If the 11 are wise, they will ensure that her second Brexit case becomes an opportunity to re-establish the boundary between law and politics. But if they allow her second case to win or if their judgment is equivocal, then they must be prepared to reap what they sow. Partisan law is an enemy of the people.

His essay on ‘The Rise and Fall of the Rule of Law’ is published in the book From Self to Selfie: A Critique of Contemporary Forms of Alienation, paperback £22.99.