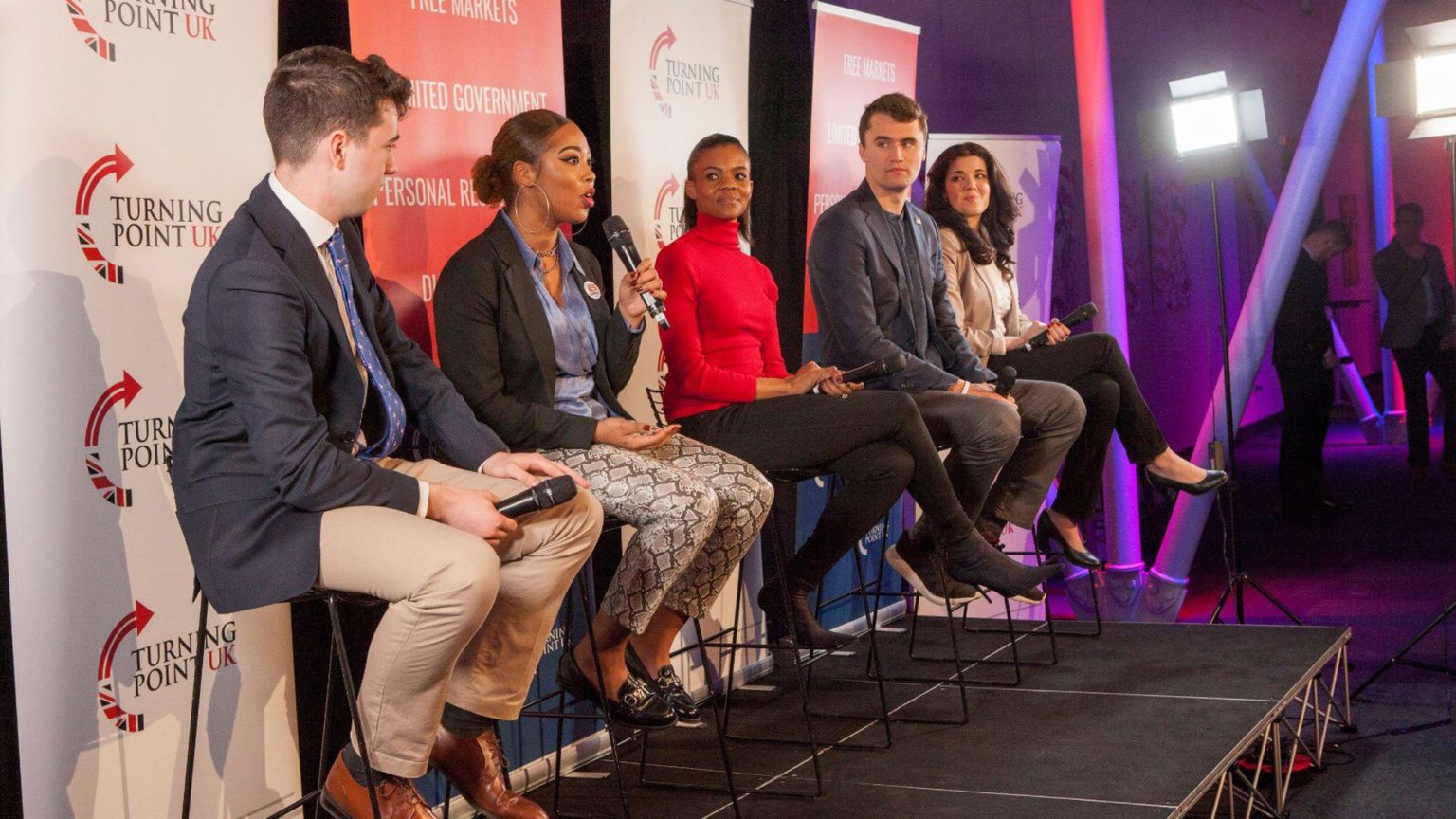 Both sides in the culture war are as bad as each other.

‘Who’s ready to be triggered?’ This was the opening line to the first live event of Turning Point UK, a British offshoot of an American right-wing movement that aims to challenge politically correct orthodoxies and promote conservative values in universities. ‘We’re a conservative group fighting against socialism’, announced Oliver Anisfeld, the UK group’s CEO, as he warmed up the crowd for the main draw: Turning Point’s US stars Charlie Kirk and Candace Owens. Kirk and Owens have become big names in US politics, racking up millions of YouTube hits as they tour hundreds of US campuses, triggering potentially thousands of libs along the way. They even have the blessing of the US president.

The London launch event took place off campus. It attracted a young and diverse crowd – not the usual Tory boys you might expect for a right-leaning event. I asked some of the attendees what had brought them here. Osman, a college student, said he was fed up with going to right-wing gatherings and only meeting ‘skinheads’ or ‘toffs’. ‘Being black, my liberal friends find it so strange that I’m on the right’, he said. He described his politics as anti-authoritarian, for small government and against identity politics. ‘Something like this is what I’ve been waiting for a long time’, he said. ‘I’m a conservative but I’m not a fan of the Conservative Party or UKIP, so there’s no real home for my views.’

Other attendees were just curious or keen to hear new arguments. ‘I like to hear rebuttals to the stuff in the mainstream media’, said Daniel, an American living in London. ‘People like Candace Owens are bringing an interesting perspective… she doesn’t subscribe to the plantation mentality of most African Americans who always vote for the Democrats.’ Owens’ argument is that the Democrats have weaponised racism to turn African Americans into single-issue voters. She is spearheading a movement called ‘Blexit’, calling for a ‘black exit’ from the Democratic Party.

Turning Point’s four founding principles are free markets, limited government, personal responsibility, and a duty to others. But it quickly became clear that the Turning Point panellists – and most of the audience, too – were really here to get stuck in to the culture war. The dominant themes of the evening were not small government and low taxes, but identity politics and victimhood.

Kirk and Owens were joined onstage by three young Turning Point UK ‘influencers’: Leave Means Leave’s Steven Edgington, Chloe Westley of the Taxpayer’s Alliance, and TPUK’s own Dominique Samuels. They were less polished than their US mentors but they generally came across as well-meaning. They gave their reasons for signing up to Turning Point: Edginton wanted to get young people enthused about Brexit, Samuels talked about the difficulties of being a black conservative, and Westley made a case for open debate and treating people as individuals. I met another of the UK influencers, Joel Chilaka, outside the venue. As a medical student, he is concerned that even a course like medicine, supposedly a hard science, has become politicised.

For Kirk and Owens, when it came to the culture war, the emphasis was firmly on the war. Disagreement from the floor was encouraged. Kirk gestured to some Trump fans at the back: ‘I see the MAGA hats… but what we really want is the disagreement.’ Both have a take-no-prisoners approach to debating. This can be entertaining when they are confronted with witless protesters or unthinking identitarians. Short clips of Owens or Kirk skewering an opponent can get a lot of online attention and sympathy. As Nathan, an attendee who was generally agnostic about Turning Point, put it, ‘I don’t agree with everything they say, but dialogue with all sides is important. And every time one of these guys gets protested against, I end up clicking on their stuff.’ But this aggressive approach seemed a little out of place at an event where most of the audience was already onside. Antifa was a no show – blame the wet, cold Sunday evening weather – and if there were any socialists, they didn’t make themselves known. Shouting matches broke out when the panellists were challenged on their support for Trump’s policies – but this was only ever right-on-right infighting. Some arguments dragged on tediously, with Kirk reeling off the latest US GDP and unemployment stats.

With no structure or set theme to the discussion, the whole event felt vague and flabby. One major casualty of this confusion was language. It is true that we live in a time where the terms ‘left’ and ‘right’ have come to mean less and less, but for a panellist to say that the Conservative prime minister, Theresa May, is ‘to the left of New Labour’ goes beyond poetic licence. ‘Why is Theresa May so left-wing?’, asked another. There are secret socialists everywhere, it seems. Any conservative that wasn’t seen as sufficiently in favour of the free market or free speech (ie, most conservatives) was denounced as not a real conservative. At one point, Charlie Kirk suggested that George W Bush might not have been a real capitalist. It’s clearly not just the left that strives for ideological purity. Perhaps the only real conservative worthy of Turning Point’s affection is Donald Trump. Trump is doing ‘unbelievably well’ and ‘succeeding on every frontier’, Kirk told the crowd. Owens, we later learned, is ‘the most pro-wall person you will ever meet’.

The politics itself was confused, too. One of the arguments Owens made for the wall was that it would reduce black unemployment. For Kirk, too many illegals would make America more Mexican, rather than properly diverse. Was this not playing into the kind of identity politics that was denounced at other times in the evening? The same double standard became clear around the issue of victimhood. Certainly, the Oppression Olympics is a problem and the panellists were justified in their attacks on it. But we also heard a great deal from the influencers and the audience about how difficult it apparently is to be a conservative these days. Unfair treatment from the media was a particular bugbear. ‘The media are vicious and racist’, said Owens.

One of the biggest rows at the launch event was whether one could be truly capitalist if you don’t embrace open borders – the free movement of labour, alongside goods, services and capital. Kirk’s beliefs are a mixture of libertarian and nationalist. I went to meet him the next day and I asked if this was a contradiction. Kirk is very likeable in person. He told me he believes ‘firmly in the individual: the individual right to express yourself, the individual right to own firearms – in the United States – the individual right to thrive without government getting in the way’. ‘The individual is fundamental, not the collective. Identity politics is repulsive. The bigger the government, the smaller the citizen’, he told me. And it is these beliefs, these quintessentially American values, that also inform his nationalism: ‘Why do I love America? Is it just because I love our rivers? Do I love our mountains? Yes. Do I love our people? Of course. But it’s our ideas, that’s really what I’m in love with.’ For him, that translates into a belief in strong borders and putting Americans first. 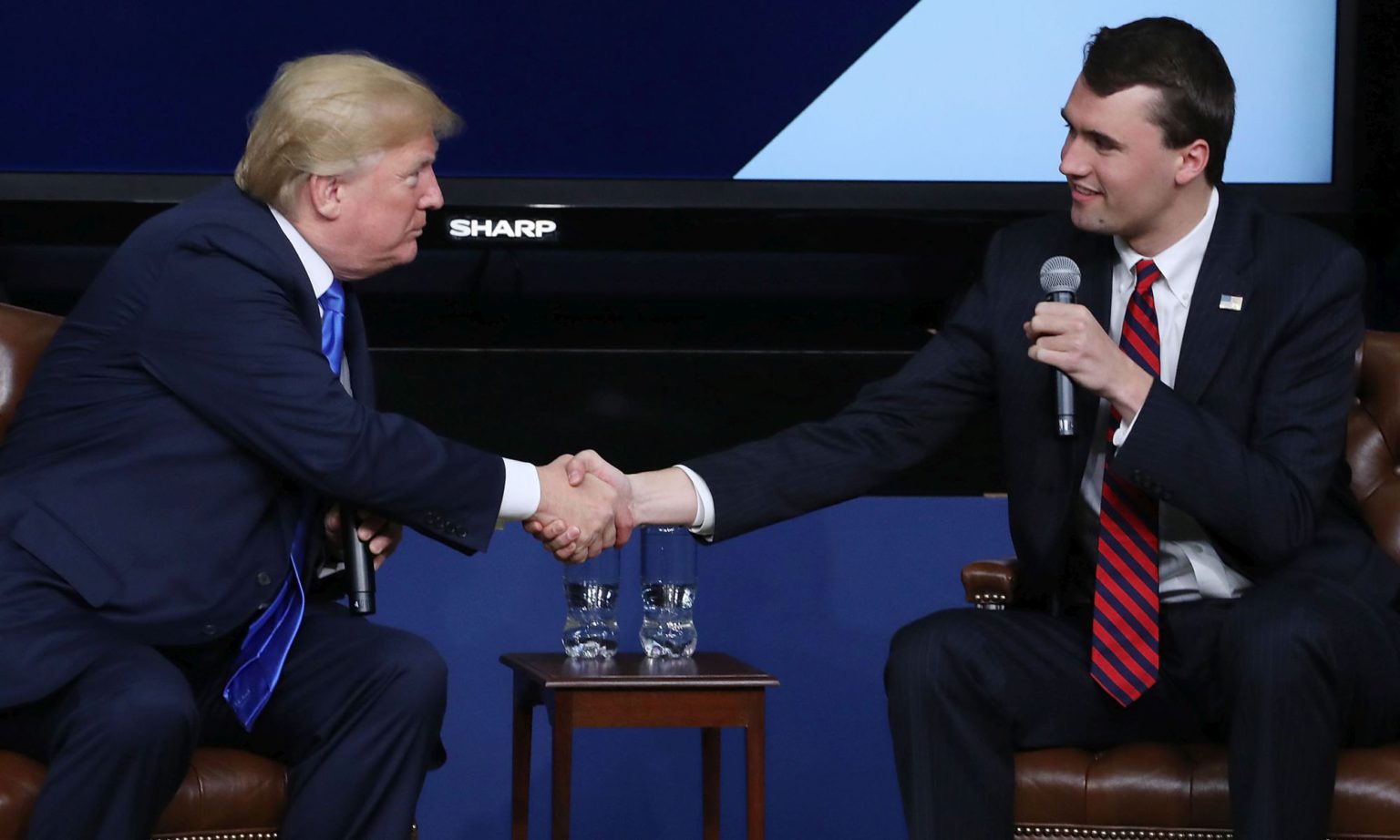 Charlie Kirk with Donald Trump at the White House.

So what did Turning Point expect to get out of Britain? Kirk said the demand for a British Turning Point came from students themselves: British students had been writing to him, and last year an envoy of Brits came over to one of the Turning Point summits in the US. ‘It seems like this is a place where youth activism is really important right now. The Labour Party is heavily focused on students and there’s a need for this type of message’, he said. But this is not party political, Turning Point is not itself affiliated to the Conservative Party, he said. (Some Tory MPs welcomed the arrival of Turning Point in Britain, while CCHQ has told Tory student associations to keep their distance.) Kirk told me that Turning Point UK wasn’t established to influence policy via the Tories. Rather, it is there to challenge ‘the ideas that are being implemented by the elites [that] stem from universities’.

The identitarian and authoritarian ideas that thrive on campus certainly need challenging. But one way Turning Point has gone about this in the US is deeply troubling. One of its major projects is the Professor Watchlist, which, according to its website, sets out to ‘expose and document college professors who discriminate against conservative students and advance leftist propaganda in the classroom’. I asked Kirk about this. He said that it had successfully highlighted some disturbing trends in higher education that needed to be addressed. He told me that as a result, there are ‘alumni that have stopped giving to their school’ or ‘stopped sending their kids to those schools’.

Some of the examples Kirk gave sounded extreme: one professor, for instance, had expressed sympathy for ISIS. (Although this entry has since been deleted from the list.) But I put it to him that free speech and academic freedom include the right to spout ‘radical’ views, leftist or otherwise, and that using financial pressure against professors who are deemed extreme is hardly conducive to open and free inquiry. ‘I’m not encouraging that in any way. But don’t get me wrong, I’m happy to see people pull their kids from universities… I think universities need to be divested.’

He said the media portrayal of the project has been unfair. ‘This is a freedom-of-expression project. For whatever reason, if you put people on a list, people get all these strange ideas.’ I suggested that people were getting these ideas because it has echoes of McCarthy’s blacklists against Communists. ‘McCarthy never published his lists, it’s a silly comparison’, he retorted. ‘Do people accuse the New York Times of McCarthyism, because they’re keeping track of Trump’s statements?’ Thankfully, there are currently no plans to bring the watchlist to the UK.

As they make their way round the UK, the Turning Point crew will no doubt cause a stir on campuses, grabbing some headlines and clicks along the way. Their ideas deserve a fair hearing. But anyone expecting a serious challenge to identity politics, the Oppression Olympics and campus censorship might have to look elsewhere.

Pictures by: Turning Point and Getty.