A tale of two Venezuelas

This troubled nation has become a weapon in the West’s culture war. 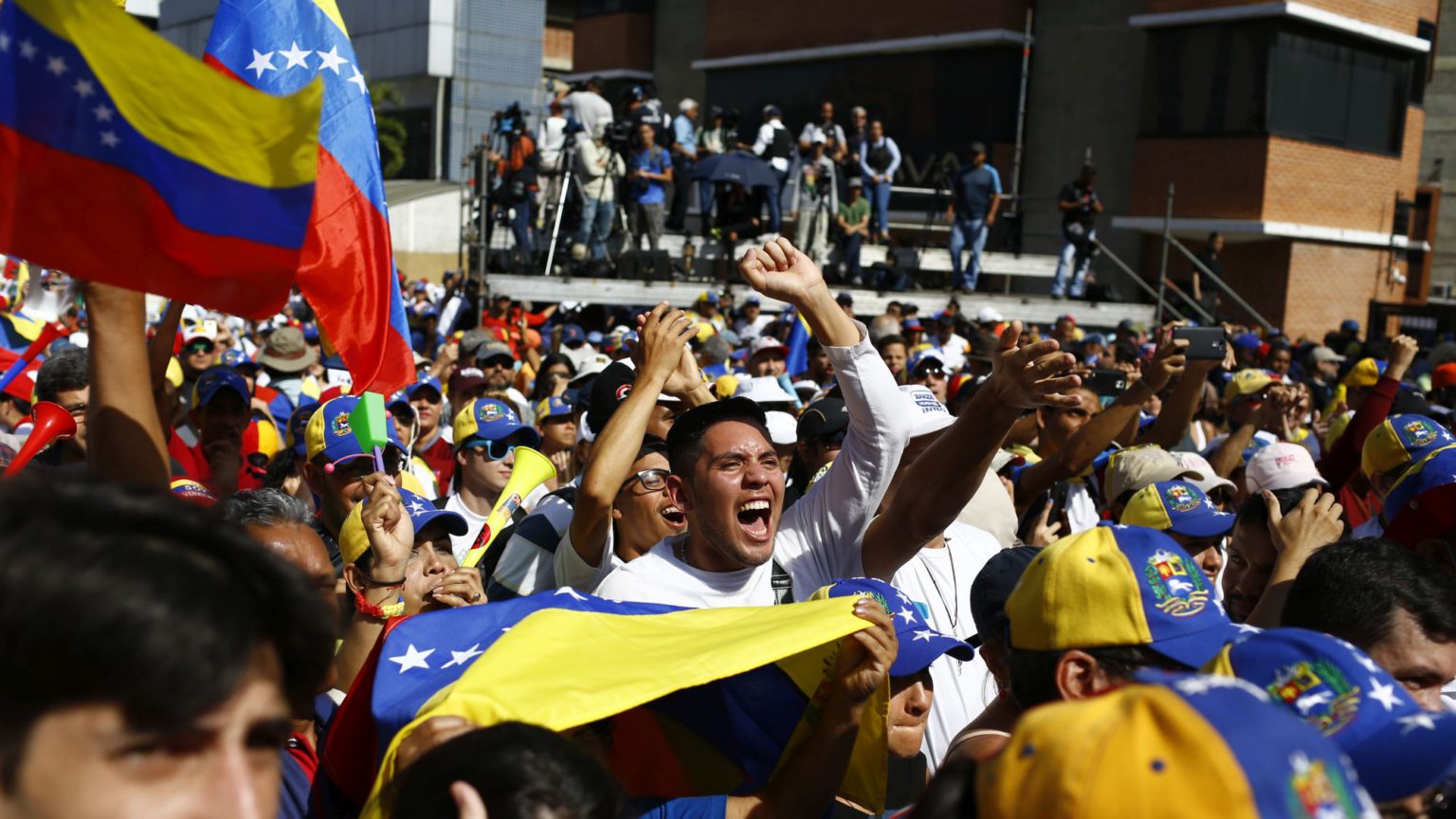 It is as if there are two Venezuelas.

The first is the Latin American nation which is currently wracked internally by ruinous socio-economic policymaking, and damaged externally by a long-term US sanctions regime. It long profited from an oil industry that Hugo Chavez’s United Socialist Party nationalised in the late 1990s, consuming its revenues in the name of the poor. But its reliance on oil was painfully exposed by the sharp drop in oil prices in 2014. The government compensated for the shortfall by increasingly taking out overseas loans, and, when the loans stopped, printing money so fast that inflation recently hit 1.3million percent.

This is the Venezuela that has since been in the grip of a repressive state, whose authoritarian tendencies developed under Chavez, but flourished under Nicolas Maduro, his handpicked successor. Its rulers are alleged to have rigged elections, buying votes in return for state-organised food rations, and banning many opposition politicians from taking part. Maduro sought to undercut the elected, but largely neutered, legislature, the National Assembly, by creating a new one, stuffed full of his supporters, so as to continue his rule. Dissent has been crushed, the press is unfree, and torture and worse are rife in its ever growing prisons.

This is the Venezuela, polarised and desperate, that is in crisis today. It is torn between the long-term anti-Chavistas of National Assembly leader Juan Guaido’s pro-market, middle-class opposition – which is now, amid food and water shortages, winning support from previously pro-government working-class areas – and Maduro’s forces, sustained by the army and those continuing to benefit from what is left of the state’s largesse.

This is the Venezuela that somehow needs to find its own way forward, democratically, on its own terms. It needs other nations to back off, whether they are Western powers ‘recognising’ Guaido as its leader, as the EU did last week, or autocratic regimes like Russia and Turkey backing Maduro in response. If this internationalisation of its internal conflict goes on, Venezuela will cease to be in control of its own fate.

But then there is the other Venezuela, the one located in the warring minds of Western right- and left-wingers. They portray it as a socialist hell hole and a besieged anti-capitalist beacon respectively. This Venezuela, then, isn’t a troubled nation full of people who are struggling, but a weapon in the West’s internal culture war.

For the Western left, this Venezuela emerged and predominated during the Chavez era of the 2000s and early 2010s. Left-wingers came to see it as a radical exception to the neoliberal consensus; a left-wing rebuttal to the mantra of There Is No Alternative; a living, breathing demonstration that another way of doing things is indeed possible.

This had its psycho-social roots in the Western left’s abandonment of any radical, Enlightened vision of its own, and with it, any attempt to win over to its cause social constituencies at home. The Western left has long dismissed its own working classes as reactionary, excessively materialistic, and, well, none too bright. And so it clung, parasite-like, to an image, a mirage, of Venezuela, drawing ideological sustenance from Chavez’s oil-bloated state as a tick does from a cow.

Those on the left of the British Labour Party, from its current leader Jeremy Corbyn to his PR chief Seumas Milne, hailed Chavez and Venezuela, while self-styled radical columnists penned easy tributes to somewhere they would only go on press junkets.

In return, Western right-wingers damned Venezuela with as much ease, and as little care for the facts, as their domestic opponents praised it. As the earlier achievements of Chavismo, the rising literacy rates and falling poverty, began to be undone by the ensuing economic and political crisis, the glee of right-wingers at the ruination of Venezuela was palpable. Today it is at a sickening pitch. ‘Socialism has brought Venezuela to its knees’, writes one commentator. Venezuela, says another, is a ‘teaching moment’ for those tempted by ‘pie in the sky’ radicalism. Another says, simply, that it is a ‘socialist horror show’. And so on.

Here the crisis in Venezuela is little more than a chance for a bit of point-scoring. It reduces a real crisis in a real nation to one more meme with which to bait ostentatious lefties on Twitter.

Meanwhile, Chavez’s and Maduro’s supporters in the Western left have refused to issue mea culpas. Some have preferred just to keep schtum. Others have turned the current crisis into a chance to talk darkly of US imperialism. Others, such as former London mayor Ken Livingstone, even joined pro-Maduro protests outside the Bank of England, calling for the release of over $1 billion in gold to the Venezuelan regime.

In other words, this Venezuela – indeed, their Venezuela – is still being generated by left-wingers’ own needs: their want of an inspiring, radical vision for the UK; their need to defend their prior valorisation of Chavez and Maduro; their need to conjure up a right-wing conspiracy undermining socialism everywhere; and above all, their need to imagine themselves as representing, in the form of Venezuela, an alternative to neoliberalism.

It is neither, of course. Today’s crisis-ridden Venezuela is the product of a specific constellation of forces, within and without Venezuela, from its oil-reliant economy, and the accompanying expansive, repressive state bureaucracy, to the international meddling and troublesome sanctions regime.

The sooner Venezuela ceases to be the object of left-ish dreams or right-ish nightmares, and beyond that, a plaything of international actors, the sooner real, democratic solutions to its malaise might appear.