Why the Irish elite craves domination by the European Union. 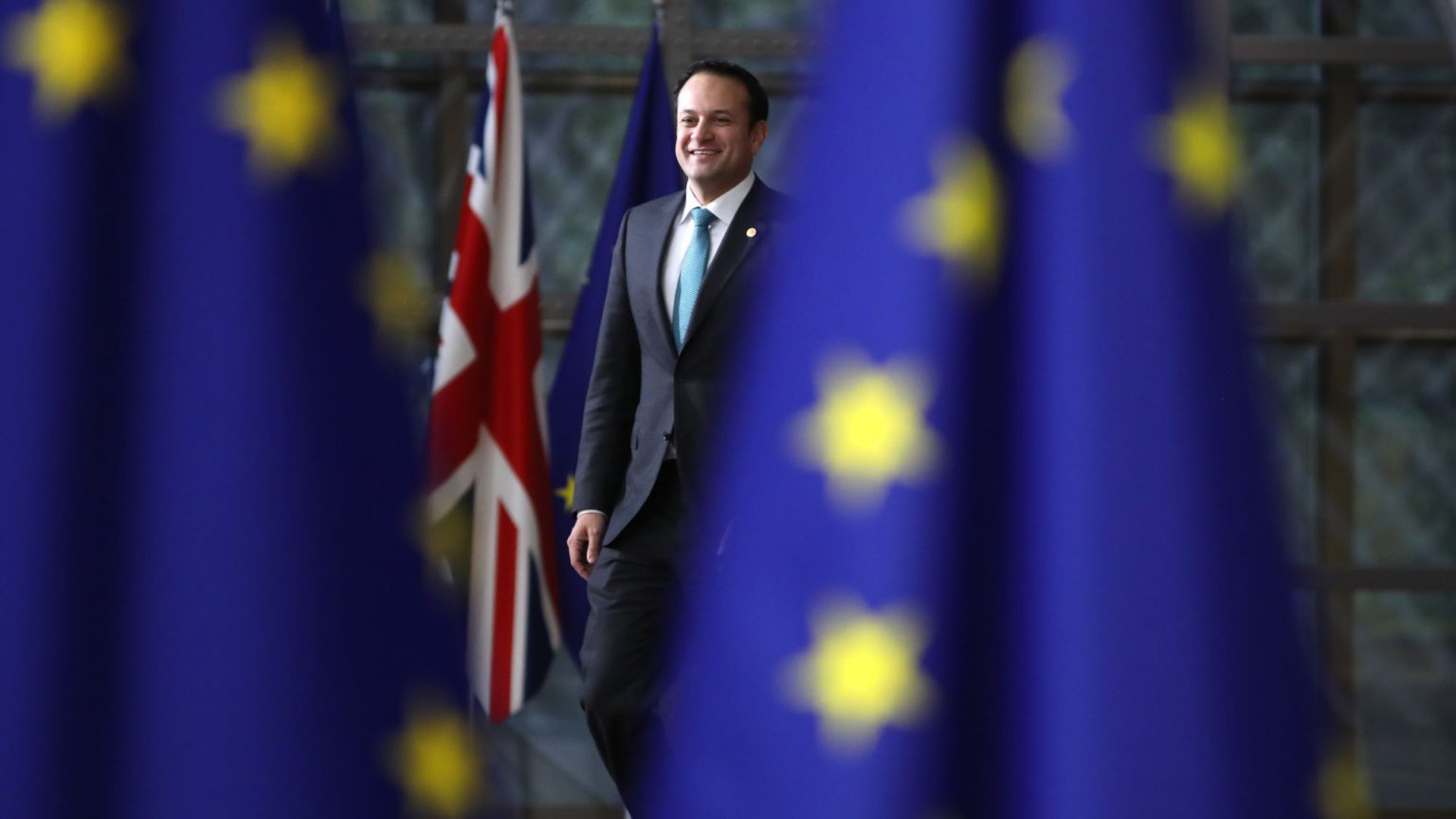 In western Europe, there is no political class as tetchy, as sensitive to slight, as Ireland’s. Second-generation Irish people who deviate from the political and moral worldview of the Dublin 4 set will know this well. For criticising Taoiseach Leo Varadkar’s anti-Brexit stance, I have been been called an Uncle Tom, a Plastic Paddy, even a souper – a reference to those starving Catholics who ditched aspects of their faith in return for soup from Protestant establishments during the Potato Famine. He ‘claims’ to be Irish, the Irish Sun sniffily said about me when I suggested on the BBC that ordinary Irish people’s loyalty to the EU is thin and changeable. There is an alarming culture of conformism on the EU among Ireland’s political elite. ‘Ninety-six per cent of people in Dublin have a favourable attitude to the EU’, establishment types always say. As if this were something to be proud of. As if these Saddam-like figures of samey thinking don’t in fact point to a dearth of debate and dissent on the EU in Ireland’s capital.

Let’s leave to one side how charming it is to be branded ‘plastic’ by inhabitants of those sections of Irish society whose historic failure to make Ireland a properly independent, economically viable nation is why my family and millions of others had to leave. A more pressing question is why Ireland’s opinion-forming set responds so venomously to any questioning of Varadkar’s behaviour over Brexit or of the Irish establishment’s cosiness with the EU. It is because their attachment to Brussels is so existentially essential for them. It is the means through which they gloss over their failures to make good on the Irish Republic. EU membership is the thing that allows them to say we now live in a ‘post-national world’, which is mighty convenient for an establishment whose own national project failed. No dissent on the Irish elite’s love-in with the EU can be brooked because without the EU, modern Ireland would stand exposed as a nation in name only, a Potemkin state ruled by an unconfident elite that grows ever-more distant from Ireland’s nationalist origins.

One of the key lines emanating from the Irish elite in recent months is that Brexit is motored by nostalgia for Empire. Fintan O’Toole of the Irish Times says Britain voted Leave because many of its citizens regret the loss of Empire. This is, of course, bunkum. In nearly three years of talking to people about Brexit every single day, I have not encountered a single soul who voted Leave because they missed the Empire. And yet O’Toole has acquired saintly status among Guardianistas in Britain and the chattering classes in Dublin. They have elevated his sneering book about Brexit, Heroic Failure, to the level of a gospel whose truth must not be denied. Heaven help anyone in the Irish country or any contrarian in Dublin or any Irish-descended Uncle Tom in Britain who raises a peep of criticism of O’Toole’s bizarre claim that a mix of Empire nostalgia, self-pity and S&M tendencies led Brits to vote Leave: they will be raged against, written off as not really Irish. As with George W Bush, you are either with the Dublin elite or you’re against it.

Yet as we all know, the fault we so readily see in others is often more apparent in ourselves. And so it is with those Irish politicos who see Brexit Britain as a bruised, tragic nation that wishes it could wind the clock back to the days of Empire. No, the Irish elite doesn’t want to start colonising vast swathes of the globe. But it does seem to miss being colonised. It seems to see in its relations with the EU the comfort blanket of foreign interference; a comforting process whereby it can unburden itself of many of the responsibilities of nationhood. It is actually bizarre that O’Toole and others should accuse British citizens of being nostalgic for Empire, when it is they, the Irish establishment, that crave continued attachment to the new EU empire while ordinary Brits have voted to leave it.

Empire is not too strong a word for the EU. This is an institution which imposed an unelected technocratic leader in Italy. Which has recently sought to override the economic plans of Italy’s now elected government. Which pushed aside the elected leader of Greece in 2011. Which threatens to impose sanctions on eastern nations that deviate from its rules. Which ignored or overrode national votes against it in France, the Netherlands, and Ireland. And which did much more to Ireland. Which pressured its allegedly ungrateful, ill-informed populace to vote again when they had the temerity to vote against the Nice Treaty in 2001 and the Lisbon Treaty in 2008. And which sent the Troika – the European Commission, the European Central Bank and the International Monetary Fund – to force Ireland’s elected politicians to take economic action they did not want to take. Back then, in 2010, even the normally pro-EU set, even the Irish Times, said the EU was behaving as if it were Ireland’s new colonial master. Yet now this same section of society says it is ‘mad’ (O’Toole’s word) that Britons want to leave the EU.

It is rich for O’Toole and his conformist cheerleaders to see sadomasochism in the British vote to leave the EU when it is they who continue to cuddle up to an outfit that has humiliated Ireland and made a mockery of its sovereignty many times in recent years. But that’s the thing: the Irish elite actively welcomes the dilution of its national integrity and sovereignty that the EU facilitates, or rather demands. Membership of the EU gives institutional expression to the ideology of post-nationalism that has been growing in Irish elite circles since the 1960s and particularly the 1970s, when the Troubles in Northern Ireland reminded everyone that Ireland’s national question remained unresolved. In response, Irish nationalism came to be problematised. It was too ‘exclusive’ an idea, Irish thinkers and observers insisted, and what we needed now was post-nationalism: a new, inclusive, outward-looking definition of Irish identity that was less concerned with borders and sovereign control than with cultural matters and the feeling of Irishness.

Book after book was published dismantling the ‘myths’ of nationalist Ireland. The old ideal of creating a single, sovereign republic should be replaced with a celebration of Ireland’s diversity, thinkers insisted. By which they often meant accommodation to the sectarian arrangements of Partition, whereby ‘diversity’ became an intellectual cover for the division of Ireland in 1921 into a largely Catholic Free State in the south and a then Protestant-dominated state in the north. The failure of Ireland’s political and intellectual leaders to realise the goals of the founding document of their nation – the Proclamation of the Republic that was pinned to the door of the General Post Office in Dublin during the 1916 Easter Rising – led them to emphasise diversity over republican values, post-nationalism over nationalism, and cultural identity over national identity. The Dublin establishment’s strained, muted celebrations of the hundredth anniversary of the 1916 Rising three years ago, and last month’s hundredth anniversary of the First Dáil (the first sitting of the independent unicameral Irish parliament in 1919), spoke to how estranged it has become from its nation’s founding ideals. As David Quinn pointed out in the Irish Sunday Times, the motor behind 1916 and the First Dáil was nationalism, to ‘take back control’ – ideas the Irish elite now snorts at, as can be seen in its ceaseless derision of Brexit.

From the 1970s on, EC and then EU membership came to play a central role in the Irish elite’s move from the old ideals of sovereign control towards the new ideology of pooled, disrupted sovereignty and external influence in national affairs. As the academic Joseph Ruane argued, for many liberals in Dublin ‘EU integration’ was a facilitator of ‘post-nationalist sentiment’. The positivity about EU integration rose from ‘despair at the failure to find a solution to the Northern Ireland conflict’ and a ‘desire to abandon a traditional nationalist project thought onerous or unachievable’, said Ruane. That is, the Irish elite’s enthusiasm for the EC and EU has been motored in large part by its sense of exhaustion with the national project instigated in 1916. Through the EU, the Irish establishment could move on from talk of national sovereignty and self-control and instead become part of an institution in which law-making is very often unburdened from nations – and from the people, of course – and turned into a technocratic, post-national exercise. In the EU, the Irish elite spied a way out of the hard intellectual and political labour of being a free, independent republic.

Where the rebels of 1916 and the Teachtaí Dála (MPs) of the First Dáil wanted to take back control, the new Irish establishment wants to give it up. Where Ireland’s founding document opposed Empire, the new Irish establishment desires it. The elites insist on conformism in relation to Ireland and the EU because they know that any questioning of their pro-EU views could unravel their flimsy claims to political and moral authority and leave this Emperor clothes-free. The founders of the short-lived Irish Republic knew the radical value of national sovereignty. One of the leaders of the 1916 Rising, the socialist James Connolly, said: ‘A free nation must have complete control over its own harbours, to open them or close them at will, or shut out any commodity, or allow it to enter in, just as it seemed best to suit the wellbeing of its own people… and entirely free of the interference of any other nation… Short of that power, no nation possesses the first essentials of freedom.’

That’s the thing: the Brits who voted for Brexit and for greater sovereign control have more in common with Connolly, with the 1916 Rising, than the current Irish establishment does. I know I’m an Uncle Tom, but I see as much democratic promise in Britons’ vote for Brexit as there was in the First Dáil that met 100 years ago.