Fintan O’Toole could not be more wrong about Brexit

His sneering at Leave voters smacks of aristocratic elitism. 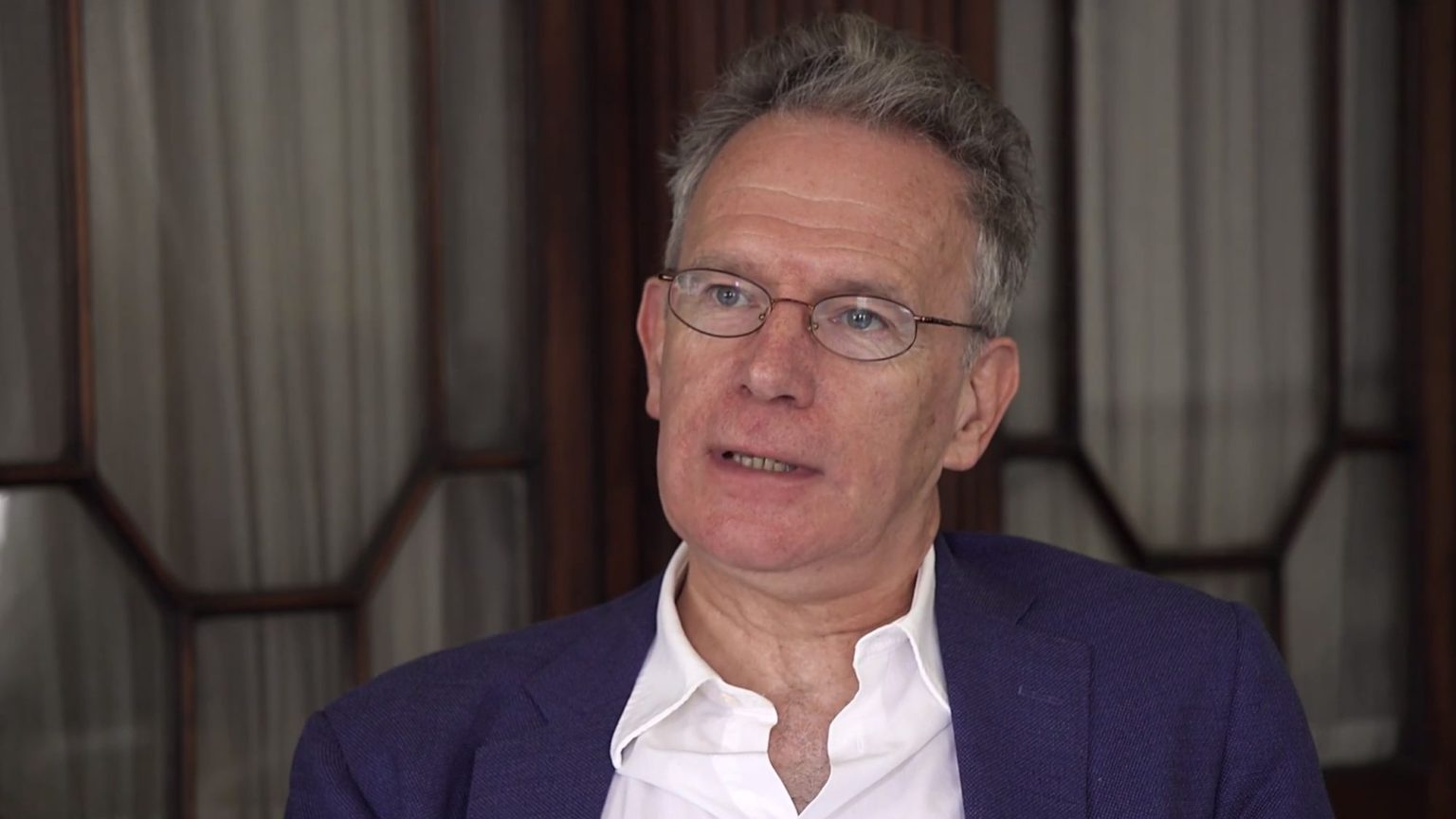 In A Traitor’s Kiss, his 1997 biography of the Irish satirist and playwright Richard Brinsley Sheridan, Fintan O’Toole recalls the character of Lady Sneerwell, the scandalmongering dowager at the centre of Sheridan’s 1777 play The School for Scandal. In his latest work, Heroic Failure: Brexit and the Politics of Pain, O’Toole emerges as the Lady Sneerwell of the Remainer aristocracy, heaping scorn and derision on the vulgar masses who voted for Brexit.

For O’Toole, author and columnist for the Irish Times, the London Review of Books and the New York Review of Books, ‘the great mystery of Brexit’ is ‘the bond it created between working-class revolt on the one side and upper-class self-indulgence on the other’. He believes that the June 2016 referendum vote to leave the European Union was the result of ‘an ostensibly improbable alliance between Sunderland and Gloucestershire’, between ‘people with tattooed arms and golf-club buffers’.

In fact, there is no mystery, because no such bond or alliance exists. These categories are united only as common objects of the condescension and contempt of the cosmopolitan intellectual elite for which O’Toole has become a prominent spokesman.

In O’Toole’s account, the racist, xenophobic yobs of Sunderland bonded with the reactionary, elitist toffs of Gloucestershire in the embrace of ‘sado-populism’, a psychic phenomenon whose roots he discovers in the nihilism of punk. ‘At the level of popular culture’, he argues, that the Leave vote was ‘pure punk’, ‘sadomasochism as revolt, bondage as freedom’. ‘If you are English and in your fifties or early sixties, two things are likely to be true of you’, he says. ‘The first is that you voted Leave’. The second is that ‘you were, in the immediate period after the UK joined the Common Market, a punk’.

O’Toole’s theory of sado-populism is largely derived from a cursory study of a range of popular novels (from the S&M fantasies of Fifty Shades of Grey and the ‘Patrick Melrose’ series to the dystopian thrillers of Robert Harris, Len Deighton, CJ Sansom), films (from The Italian Job to Dunkirk), histories (from the Hundred Years War to the ‘historic failures’ of Britain’s imperial past). His discussions of these works are often amusing and he has a good ear for curious historical and cultural resonances.

But people who become preoccupied with identifying sexual deviance in others often reveal more about themselves than the objects of their prurience. Speculating about sadomasochistic fantasies among those bit-of-rough Leave voters clearly allows Remainers to relieve those of their own anxieties that stem from having to choose between submission to their dominatrix in Westminster and bending over to be rogered by Jean-Claude Juncker and his colleagues in Brussels. The British left is eternally trapped in sadomasochistic bondage by the Labour Party. And O’Toole personifies a Dublin elite that, after decades of humiliating self-abasement before its London masters, in 2010 surrendered its last shreds of national sovereignty to the Troika of the European Commission, the European Central Bank and the IMF. More pain please!

The British experience of postwar imperial and national decline has indeed produced many morbid symptoms that are reflected in diverse ways in the cultural imagination. But to influence events in the real world, ideas must assume a political form. The works of JRR Tolkien may enjoy enormous popularity as books and films, but they have not inspired movements to restore Anglo-Saxon England. Where is the evidence that sadomasochism and imperial nostalgia played a significant part in the appeal of any of the organisations supporting the Leave campaign?

For O’Toole, the crucial political force uniting supporters of Leave is ‘English nationalism’. Brexit, he insists at the outset, is ‘essentially an English phenomenon’. Yet he ignores UKIP, the only political party with a distinctively nationalist agenda and a base of support largely confined to England. This is a movement so diffident about its English nationalism that it hides it under a Unionist umbrella. Once its only popular cause – withdrawal from the EU – had been superseded by the referendum, it collapsed in the 2017 General Election and subsequently disintegrated.

O’Toole’s only evidence for his belief in a rising tide of English nationalism comes from two pamphlets published by the IPPR think tank in 2012 and 2013. These reported opinion polls commissioned to discover popular attitudes to devolution to regional assemblies in the UK which revealed some resentment among English voters over perceptions of Scottish and Welsh privilege. It seems doubtful whether an increase in support for devolution to England can be regarded as reflecting ‘a seismic shift in national identity’. In retrospect, it is interesting that the 2013 report noted that ‘the EU is very unpopular in England’ – this was ‘the dog that finally barked in the night’ (the title of the 2012 report), not English nationalism, which has remained a marginal influence.

No doubt Leave voters included a small number of extreme right-wingers and racists. But support for such ideas has declined dramatically since the 1970s, when explicitly racist and anti-Semitic organisations could mobilise large demonstrations and attract mass electoral support. Remain campaigners have consistently exaggerated the numbers and influence of miniscule far-right groups and of those few deranged individuals who have carried out racist attacks, as a way of disparaging mainstream Leave supporters. Shame on them: Britain is a tolerant country.

Voters for Leave certainly also included some Tory reactionaries who yearn for a return to the glory days of empire. This is a faction that bitterly resents its vestigial status in the socially liberal Conservative Party of David Cameron and Theresa May. O’Toole’s case for the importance of this group rests on a 20-year-old pamphlet by the late William Rees-Mogg, father of Tory Brexiteer Jacob, which advocated an ‘apocalyptic, Ayn Rand-ish, elitist vision’. It was for this sort of guff that he earned the moniker ‘Mystic Mogg’ in Private Eye. It seems doubtful whether this pamphlet has had much influence even on Jacob, never mind on the wider Brexit electorate.

In common with other anti-Brexit ideologues, O’Toole never asks why a cause backed by the massed ranks of the British political, economic and cultural establishment so spectacularly failed to secure the expected support of the majority of the electorate. He also never asks why the slogan ‘Take back control’ had such resonance among the majority of voters of all social classes in areas of industrial decline – and among a substantial minority in the more buoyant rural and urban centres. It is also striking that in the more than 200 pages of Heroic Failure, not a single positive word about the EU is to be found. It is further striking that he offers no analysis of the fascinating phenomenon of a Remain campaign that is passionately committed to defending…… what, exactly?

O’Toole acknowledges in passing that the decades of economic decline since Britain’s accession to the EEC in 1973, and the erosion of the welfare state in the past 10 years of austerity, have contributed to popular disillusionment with an establishment increasingly closely identified with the EU. He recognises the alienation from the political elite that has been reflected in recent General Elections, which have witnessed declining support for all the major parties. He even recognises popular revulsion against the EU’s autocratic treatment of Greece, Ireland, Portugal and Spain. In one extraordinary passage, he admits that ‘being angry about the EU isn’t a psychosis’ but ‘a mark of sanity’, before immediately retreating into psychobabble, declaring that Brexit is ‘still self-harm’. He repeatedly claims that supporters of Brexit exaggerate the influence of the EU on British life. Yet he also endorses the familiar Remainer prejudice that to leave the EU would be a catastrophe.

O’Toole devotes much ink to denouncing the ‘Churchillian pretensions’ and mendacity of Boris Johnson (recycling all the old stories of his dishonest newspaper columns). No doubt Leave voters have been betrayed by the leaders of the campaign. But the greatest betrayal is that of the liberal intelligentsia represented by O’Toole, which has taken its stand on the side of the British and European elites while scorning the mass popular vote for Brexit as an expression of ‘festive self-pity and inchoate rage’. Johnson can be legitimately accused of pursuing a frivolous and narcissistic approach to serious matters of state, but O’Toole’s combination of cod psychology and flippant literary cherry-picking is little better than a Boris job. Serious analyses of Brexit, and of the issues of national sovereignty and democratic accountability that lie at the heart of the controversy, are much needed. This isn’t one of them.