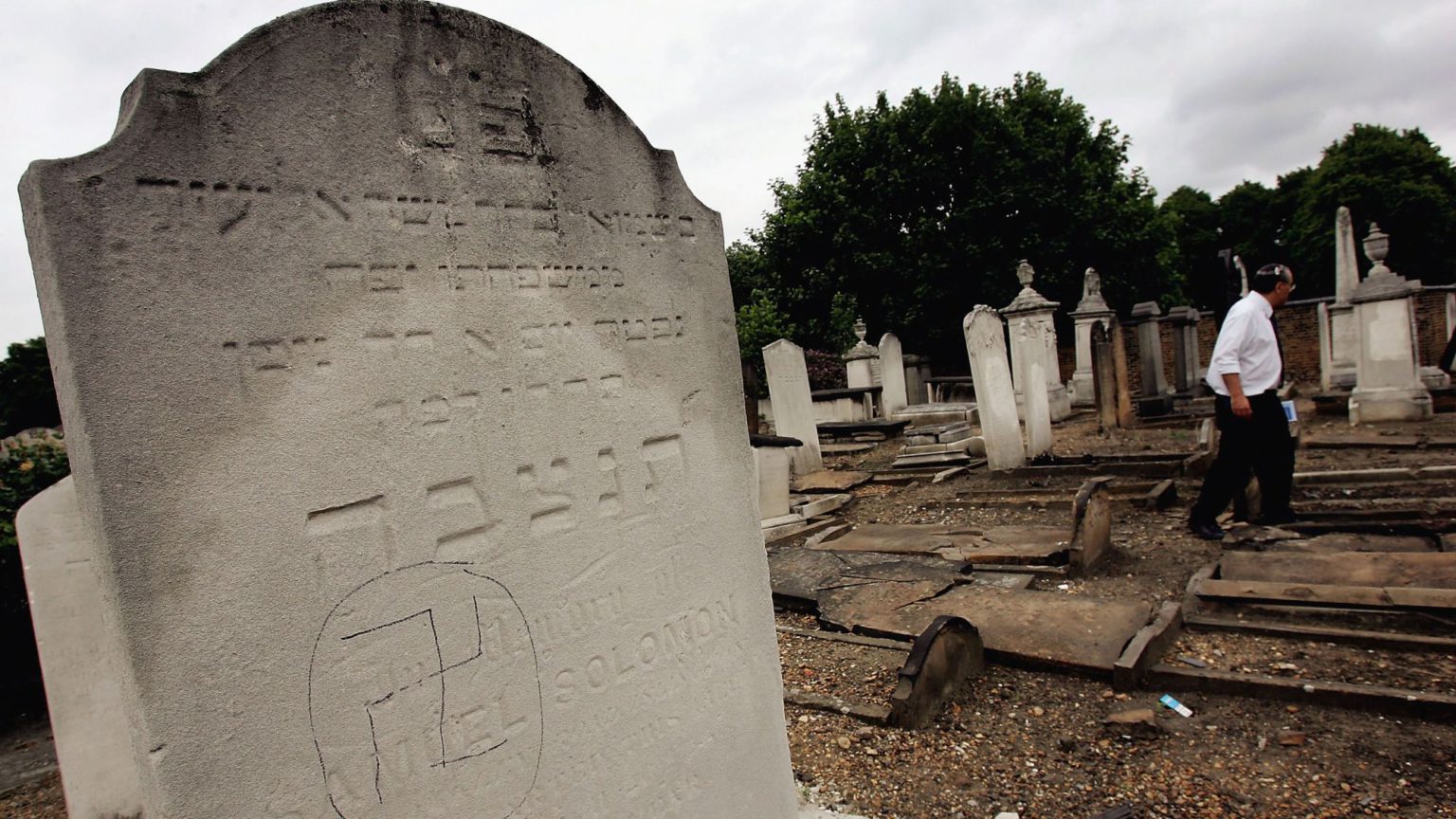 One of the most striking things about the woke new left, including sections of the Corbynista left, is that they see racism everywhere except in relation to Jews.

So these are the kind of people who, if Katy Perry wears her hair in cornrows, they will start talking about white supremacy. They will literally use the words white supremacy.

If Jamie Oliver makes jerk rice, Labour MP Dawn Butler will have a meltdown and talk about ‘cultural theft’. This is the racist co-option of other people’s lives, they say.

As for Islam – virtually every criticism of Islam is chalked up to racism these days. Witness the fuss over Boris Johnson’s jokes about women who wear the niqab. You’d think he was Goebbels the way people reacted. Basically, if you don’t curtsey every time you pass a woman in a niqab, you’re racist.

But when it comes to the Jews, it’s an entirely different story.

So someone can paint a mural in east London showing hook-nosed men trampling all over humankind and these same people will be like: ‘Oh that’s a nice painting, I can’t believe they’re taking it down.’

Or more seriously, there can be a firebombing attack on a synagogue and some people will say, ‘We don’t know for sure if this is racist… let’s not jump to conclusions.’

This actually happened, in Germany, in 2014. A synagogue was firebombed and some green activists and others argued that it wasn’t an anti-Semitic hate crime – it was a statement about Israel and its actions in Gaza. In 2017, a court agreed with them: it ruled this was arson, not hatred.

Even more strikingly, Jews can be massacred in public and some people will say, ‘Come on, we don’t know the whole story, let’s not be rash’.

So when four Jews were murdered at a kosher deli in Paris shortly after the Charlie Hebdo massacre, we had Karen Armstrong, the religious correspondent, saying it wasn’t an act of anti-Semitism but rather a response to the situation in Palestine.

Other left-leaning people in the media were most worried that there would be an Islamophobic backlash in response to the deli massacre and the Charlie Hebdo massacre. So even when there is racist violence against Jews, some people think to themselves, ‘Oh no… I hope the Muslims are okay’.

The same people who are myopically obsessed with racism, and who see it in every film, every innocent conversational question, every celebrity’s hairstyle, never seem to notice racism when its target is the Jews.

They go through life wearing these super-sensitive racial goggles, but those goggles always seem to stop working when Jews are involved.

This is such an alarming disparity that it deserves serious interrogation. My view is that it tells us a great deal both about racism and so-called anti-racism in this era of identity politics.

About anti-racism, it tells us that this is no longer a serious or progressive pursuit. If it were, we might expect that it would notice – and ideally organise against – the recent outbursts of hatred for Jews in Europe, during which a Holocaust survivor has been burnt to death, Jewish institutions have been attacked, and military men have been posted at Jewish schools to protect children.

Instead, the new ‘anti-racism’ is really a form of social and linguistic etiquette. Its aim is not to confront racism but to police what people say, to police culture, to police interpersonal relationships, all under the guise of managing relations between the races. It’s a new form of racialised governance.

This is why it is so sensitive to something like a white freshers student asking a black freshers student where her parents are from – which is apparently a microaggressive act of white entitlement – but shrugs its shoulders when Jewish graves are vandalised. Because its aim is not to confront racist hatred but to govern and reprimand social and human relations.

Fearmongering about racism, and the insistence that new policies and institutions are required to deal with racism, have become the means through which our politically correct ruling classes assert their moral virtue and their moral right to tell us how we should speak and how we should behave.

And on racism, the woke-left blind spot on anti-Semitism tells us that those who conceive of themselves as anti-racist are in fact very often at the forefront of sanctioning racism.

In fact, this isn’t even a blind spot. The problem isn’t simply that some in the identitarian left fail to notice anti-Semitism but that they actively agitate against the discovery and discussion of it.

So for the past 20 years, in the post-Macpherson era, most of the left have subscribed to the Macpherson report’s definition of a racial incident as ‘any incident which is perceived to be racist by the victim or any other person’.

They wilfully went along with officialdom’s abandonment of objectivity and proof on matters of racism and embraced the new, entirely subjective definition of racism. And this of course contributed enormously to the inflation of the racism problem in 21st-century Britain: with every incident being clocked as ‘racist’ as soon as the victim or someone else said it was, it wasn’t long before the new elite’s claim that Britain is institutionally racist, and that their wokeness is required to fix it, became an established prejudice.

And yet, as mistaken as this eschewing of objectivity and proof was, the striking thing is that the new elastic understanding of racism is not extended to Jews. They are the only minority group to whom Macpherson seems not to apply.

Witness how, in the controversy over Labour’s adoption of the International Holocaust Remembrance Alliance’s definition of anti-Semitism, numerous Corbynistas insisted, for the first time, that we need firmer evidence before we can say something is anti-Semitic; and that we have to consider the intentions of the alleged anti-Semite; and that we must protect freedom of speech and not allow tackling racism to stymie legitimate public discussion.

They are now building back up the very objectivity they conspired in dismantling in the post-Macpherson era. But for one group only. This is more than a double standard – it represents an effort to make it uniquely difficult to establish the seriousness of anti-Semitism and to register the concerns of Jewish people. In demanding proof of racist intent for this form of racism alone, the woke left erects hurdles to Jews who might want to have their experiences treated in the same way as other group’s experiences.

Why does the new left do this? Why does it doubt or deflect from one particular form of racism? It is because its politics, its worldview, has been central to the rehabilitation of this racism.

The degeneration of the left into a conspiracy-theory view of capitalism – so that it now views every bad thing as the responsibility of faceless cliques of powerful bankers – lays the ground for the return of the oldest conspiracy theory of all.

Its acquiescence to the prejudices that exist in certain Muslim communities – communities that have been put beyond both study and criticism by the identitarian injunction against so-called Islamophobia – means it never confronts one of the most influential forms of anti-Semitism in Europe today.

And its eccentric ideology of ‘privilege’ – where inequality comes to be understood not as a consequence of uneven development or structural failures, but of problematic attitudes in a strictly defined hierarchy of ‘most privileged’ to ‘most oppressed’ – means it can never genuinely accept the idea that Jews are victims of hatred. Jews, in the eyes of many of the woke, are at the pinnacle of ‘white privilege’.

The end result is that Jews are both demonised anew and racism against them is either ignored or made more difficult to ascertain and assess. The woke cannot combat the new anti-Semitism because they are among the midwives of its existence.

This is the edited text of a talk Brendan O’Neill gave at the Battle of Ideas in London on 14 October 2018.