The showtrial of Brett Kavanaugh

#MeToo is a menace to democratic politics. 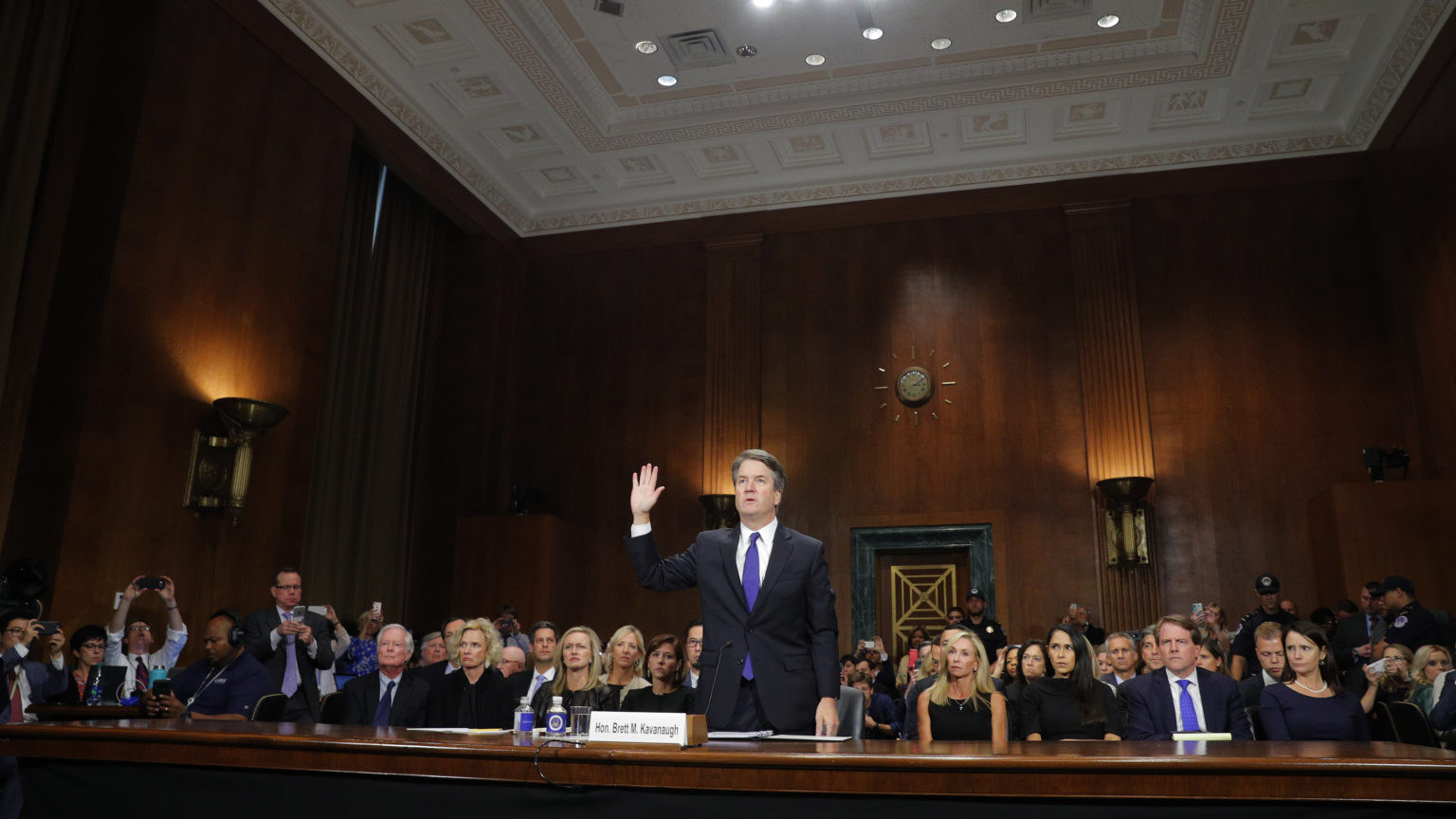 Exactly one year ago this month, #MeToo spread from social media to become a global movement. Now, with the showtrial of Brett Kavanaugh, we see its legacy. The evidence-free testimony of Christine Blasey Ford has, for the time being at least, successfully derailed Kavanaugh’s appointment to the Supreme Court. The FBI will conduct a week-long investigation into his past. Even if Kavanaugh is ultimately appointed, public life in the US – the working of its democratic political processes – has been fundamentally challenged.

The Kavanaugh hearings demonstrate the power the #MeToo movement now has. Almost 63million people voted for Donald Trump in 2016, giving him the opportunity to nominate – and, normally, expect to have appointed – his choice of candidate to the Supreme Court. But, after a year of #MeToo activism, just one woman needs to point, to accuse, to allege sexual misconduct, and her word alone is sufficient to overturn past political conventions, override Trump’s democratic mandate, and disrupt the daily workings of government. Thanks to the success of the #MeToo movement, we have the bizarre spectacle of the most powerful country in the world grinding to a halt over what two teenagers may or may not have got up to in a bedroom more than three decades ago.

Over the course of the past 12 months, activists have cultivated the idea that all women are victims of sexually entitled men. From rape to salacious comments, from sexual assault to an unwanted hand on a knee, to be a woman, #MeToo tells us, is to run a daily gauntlet of abuse. What’s more, wherever their personal experiences sit on this spectrum of sexual wrongdoing, #MeToo’s cheerleaders insist that women are irreparably psychologically damaged by the trauma they endure. In this regard, Christine Blasey Ford is the perfect #MeToo advocate.

On the podium, Ford was able to relive her teenage suffering and perform the subsequent harm she claims those decades-old regretted minutes have had on the rest of her life. Ford was not raped. She alleges that at a drunken teenage party, Kavanaugh roughly and without her consent held her down on a bed and tried and failed to remove her clothes. He placed his hand over her mouth when she tried to protest and, when she struggled, laughed about it with a friend. We are unlikely to know for sure whether or not these events occurred. Kavanaugh denies it and no independent witnesses corroborate Ford’s account; unsurprisingly, after three-and-a-half decades, facts are thin on the ground.

What Ford alleges happened to her was no doubt unpleasant enough to leave an innocent 15-year-old distressed, embarrassed and humiliated. However, what happened clearly wasn’t so terrible that Ford felt compelled to report it to her parents, teachers or the police. Yet, decades later, we are expected to believe that this highly successful psychology professor, an articulate and poised professional, was so traumatised by what took place on that summer afternoon that it has had an impact on the rest of her life. But to say this – to question the veracity of Ford’s response – is a heresy in the eyes of #MeToo activists. Apparently, women – despite much evidence to the contrary – are not just incapable of lying about sexual assault; they also never misremember, either.

Actually, I don’t want to have an opinion on the appropriate level of trauma Ford should now be demonstrating. Whether I or anyone else believes every word she says, thinks she’s making the whole thing up, or that something probably went on but we can’t be sure what, should be utterly irrelevant. But in making her anguish so spectacularly public, Ford invites us all into that bedroom; we’re asked to validate her experiences, and to believe her. In turning the lens on Kavanaugh, she asks that decisions about fitness for public office are not made on merit or achievement or matters of public record, but on the basis of teenage behaviour. If we’re all to be held to account for what we got up to in private as teenagers there will be a great many vacancies for public office.

Ford asked us to validate her trauma, and what resulted was a media circus with crying actresses and weeping journalists. This was no longer about Kavanaugh at all – he became a vessel for high-profile women to remind the world, yet again, that they suffer, that despite profile, pay and success, they are victims too. Ford was, of course, celebrated for her bravery in reliving her trauma. But the perception of middle-aged professional women as quivering wrecks, unable ever to get over teenage traumas, bruised and battered by what life has thrown at them, so unworldly as to be incapable of lying, does women no favours.

Many of Ford’s supporters were spurred on by their displeasure at the prospect of Kavanaugh’s appointment to the Supreme Court. There is a generalised loathing of Kavanaugh as a ‘white man’ demonstrating ‘toxic masculinity’. More specifically, there is outrage at his anti-abortion stance and an understandable fear that he will attempt to overturn Roe v Wade. But in attacking Kavanaugh for alleged teenage sexual transgressions, the pro-choice lobby shows its lack of self-confidence in making the moral and political case for abortion. Having abandoned the political battle, Trump’s opponents clutch at straws – and, as has been proven time and again, an accusation of sexual harassment is a very safe straw to grasp. Those opposing Kavanaugh have, most likely, won, but they have played a disingenuous and anti-democratic game.

The lesson from the Kavanaugh hearings is that in the era of #MeToo, anyone who makes themselves politically unpopular can expect to be on the receiving end of unsubstantiated accusations of sexual harassment. As women are to be believed without question, accusations alone are now enough to have people erased from public life. The accusers are always holy now.