We can’t rely on judges to defend abortion rights

Trump’s upcoming Supreme Court pick reminds us why this battle must be won democratically. 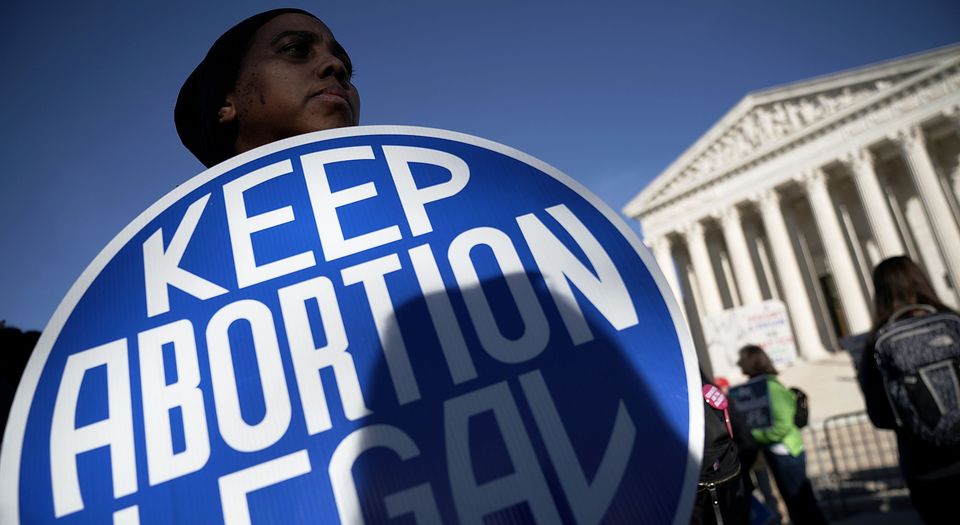 Following its recent monumental defeat in the court of public opinion in Ireland, the international anti-abortion movement now has its hopes pinned on a change of personnel on the United States Supreme Court. The appointment of a new judge to replace the recent retiree, Justice Kennedy, is in Trump’s hands, and an anti-abortion appointment will be enough to overturn the balance that has retained the constitutional commitment to a woman’s right to choose that has existed for more than 40 years.

Anti-abortion activists are as hopeful as the supporters of reproductive choice are nervous. All eyes are on the future makeup of SCOTUS.

It did so by dividing pregnancy into three gestational stages. During the first trimester of pregnancy, the woman has the right to determine her own future privately without state interference, and this takes priority over any perceived responsibility of the state to intervene. In effect, the state conceded a virtually unconditional legal right to abortion. In the second trimester, when it was thought the risks of abortion were relatively greater than in the first 12 weeks, the right of the state to regulate and protect women’s health becomes ‘compelling’, but only insofar as to insist on reasonable standards of medical care, and not so much as to deny a woman an abortion. Only in the third trimester does the state’s right to protect the developing life in the womb come to the fore. In making this decision, the court placed great emphasis on its understanding of ‘viability’, which it understood to be the point at which the fetus could live by itself outside the womb, albeit with substantial medical support.

In many ways, the decision represented an intelligent compromise. It conceded the value of the fetus and balanced it against the right of a woman to determine for herself what happens to her body, and to her family life.

But the problem with any compromise is that it satisfies no one. Those who support women’s choice have been frustrated by the gestational distinctions, which are physiologically arbitrary and irrational from the personal perspective of the woman. Fetal development does not jump in stages; development is constant and so any hard policy line based on the number of weeks since conception is somewhat random. As I argue in my book The Moral Case for Abortion, no magic happens been 12 weeks and 13 weeks to justify greater state intervention.

The Supreme Court understood this in 1973. Justice Blackmun, the judge forever associated with Roe v Wade, noted in a memo: ‘[T]he end of the first trimester is critical. This is arbitrary, but perhaps any selected point such as quickening [when the woman feels fetal movement] or viability is equally arbitrary.’ Indeed in 1992, when the Supreme Court faced a challenge to Roe v Wade (Planned Parenthood v Casey), it ruled to drop the trimester framework and affirmed that a woman had a right to abortion until fetal viability, defined as the time when the fetus ‘was potentially able to live outside the womb, albeit with artificial aid’. In effect, this switched one set of arbitrary time periods for a single one.

Issues around the definition of viability, and when it can be reasonably applied, are the focus of repeated contests in Europe and the UK as much as in the US. Abortion opponents assert that modern technologies allow us to know far more about the attributes and capabilities of fetuses in earlier stages of development, and so, they argue, the balance of protections should be tilted towards the fetus earlier. But for those of us committed to women’s choice it is manifestly evident that the reasons and circumstances that motivate a woman to access an abortion do not cease to exist when the third trimester is reached: stable relationships and family circumstances can be shattered as easily at 26 weeks of pregnancy as at six weeks.

A powerful advantage of the US framework over that of the UK is its recognition that a woman should be able to decide the future of her pregnancy with the burden of proof on the state to determine that there is a reason why she shouldn’t. In the UK, abortion has never been seen as a matter for self-determination, as a private decision based on a woman’s right to make certain decisions independently of state control. Quite the opposite. The law that provides for legal abortion – the 1967 Abortion Act – requires two doctors to sign off the abortion. They are the ones who decide. A woman in Britain can to this day be prosecuted for causing her own miscarriage.

But the US experience has shown us something very important: that the right to decide serves little purpose if you can’t avail yourself of the procedure. Since Roe v Wade, most US states have enacted or attempted to enact laws to limit or regulate abortion. These include laws requiring parental consent or notification for minors, spousal notification or mutual consent between spouses; laws requiring abortions to be performed in hospitals rather than clinics; bans on state funding of abortion; and laws requiring waiting periods and fetal ultrasound scans. There have also been laws forbidding doctors from performing particular kinds of procedures. In 1976, Congress passed the Hyde amendment, which barred federal funding for abortions for poor women through the Medicaid programme.

The simple point is this: despite Roe v Wade almost every restriction imaginable has been brought to bear on US abortion services. The Supreme Court has struck down some of the more ludicrous ones, but has failed to move against funding bans, among other restrictions.

Most recently, rafts of regulations targeted at abortion providers (known as TRAP provisions) have been introduced by states to make abortion harder and more expensive to provide. The additional costs of meeting such requirements have closed providers down, and made accessing abortion for women in some US states as difficult as it is for women in nations where abortion remains banned. For example, in Texas a woman has the constitutional right to decide to end her pregnancy, but would have to travel long distances and pay a significant amount of money to do so. Before the referendum in Ireland, by contrast, it was relatively easier for Irish women to access abortion services in England, even though abortion was constitutionally banned in their country.

Ultimately, the courts – even a court as important as SCOTUS – are insecure and unwieldy means for defending women’s access to abortion. The services that women need require a more democratic mandate. Defending abortion rights is about more than the interpretation of an abstract principle in law. Even though the principle enshrined in Roe v Wade is crucially important.

Perhaps the most important thing to come out of the Supreme Court regarding abortion rights was this section of the majority decision to reaffirm Roe v Wade in the Casey challenge:

‘Our law affords constitutional protection to personal decisions relating to marriage, procreation, contraception, family relationships, child rearing, and education… These matters, involving the most intimate and personal choices a person may make in a lifetime, choices central to personal dignity and autonomy, are central to the liberty protected by the Fourteenth Amendment. At the heart of liberty is the right to define one’s own concept of existence, of meaning, of the universe, and of the mystery of human life.’

Conservatives in the US must consider carefully whether they are really prepared to attack that principle. And politicians in the UK would do well to keep it in mind when they face the demands we are making for the decriminalisation of abortion across the UK.