The flight of the elites from the nation state 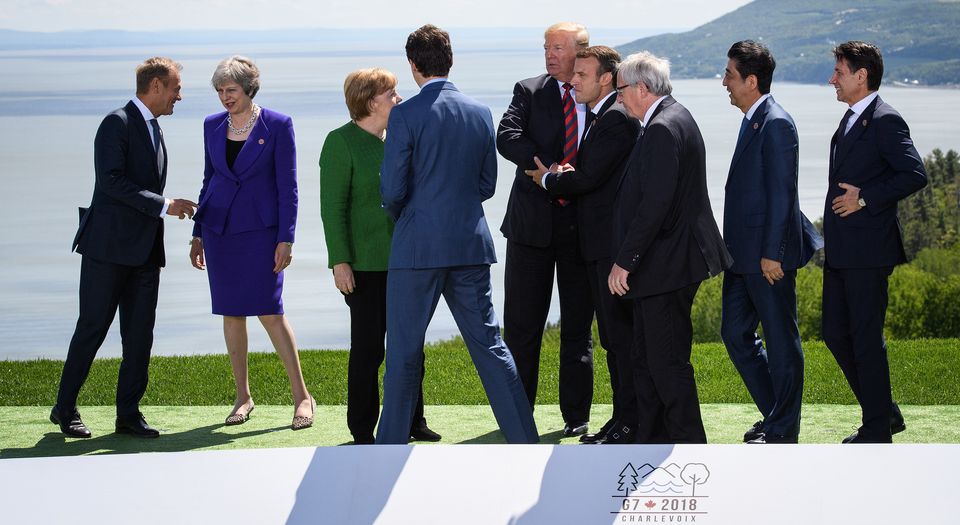 The photos of US president Donald Trump romancing his Russian counterpart Vladimir Putin at their meeting in Helsinki tell us something very important about international relations today. Geopolitical affairs have always been a byzantine enterprise. However, things have become even more complicated in recent years because of two interlocking developments. The first is the de-nationalisation of significant sections of the Western ruling classes, and the second is the internationalisation of the Culture War.

Trump and Putin, despite both suffering from limited linguistic skills, speak in a similar language. They are both unapologetic nationalists with a fairly strong sense of their national interest. And despite the national rivalry between Russia and the US, both presidents are on the same side in the newly globalised Culture War. As the Telegraph’s Tim Stanley noted, ‘When Trump sees Putin, he doesn’t think about the Cold War – he sees a conservative champion of civilisation’. Many American conservatives see Putin as a potential ally in the Culture War.

In Europe, too, opponents of identity politics, multiculturalism and EU federalism in Italy, France, Germany and elsewhere tend to have a positive attitude towards Russia. Paradoxically, Russia, a nation with historical links to the Byzantine East, now seems to be more adept at promoting Western civilisation than many of the leaders of the Western world itself.

On the other side of the West’s political spectrum, those who oppose Trump’s political and cultural outlook are also hostile to Russia. But unlike during the Cold War, when Western observers denounced the Soviet Union for its Communist ideology, today’s opponents of Russia condemn its conservative, authoritarian worldview.

Consider then US president Barack Obama’s high-profile address to the youth of Europe in March 2014. In that speech, he linked his criticism of Russia’s occupation of Crimea with his opposition to certain, apparently ‘backward’ cultural values back home in the US. He celebrated the politics of identity and permissiveness, and denounced the ‘older, more traditional view of power’. He said that, ‘instead of targeting our gay and lesbian brothers and sisters’ – as Russia does – ‘we can use our laws to protect their rights’.

In essence, Russia served as a proxy for Obama’s attack on his traditionalist adversaries in the US. The domestic Culture War increasingly plays itself out in the realm of America v Russia. It is likely that when Trump denied that Russia meddled in the 2016 US presidential election he was likewise motivated by a desire to settle scores with his opponents in the domestic political sphere.

In response to the anti-traditionalist values taking hold in the US and much of the West, Putin has sought to assume the role of the global leader who’s willing to fight for the Christian, traditional way of life. In turn, Western diplomats criticise Russia for its nationalist, patriarchal, sexist culture. In 2012 President Putin explicitly expressed his conviction that ‘cultural self-awareness, spiritual and moral values, [and] codes of values are an area of intense competition’. He has said that the struggle to ‘influence the worldviews of entire ethnic groups, the desire to subject them to one’s will, to force one’s system of values and beliefs upon them, is an absolute reality, just like the fight for mineral resources that many nations, ours included, experienced’.

Putin wants to cultivate an image of Russia as a moral crusader fighting for the survival of human civilisation. In his annual state of the nation speech in 2013, he responded to Western criticisms on Russia’s attitude to homosexuality by lamenting the decline of morality in the West. He drew attention to what he clearly views as the morally disorienting impact of Western-style social engineering: ‘This destruction of traditional values from above not only entails negative consequences for society… [it] is also inherently anti-democratic because it is based on an abstract notion and runs counter to the will of the majority of people.’ He claimed that traditional family values were the only effective defence against new values that are ‘genderless and infertile’.

Although he was speaking to the Russian public, Putin’s denunciation of ‘genderless and infertile’ lifestyles was also aimed at a global audience. Just a few days before he delivered that speech, an influential Kremlin-linked think-tank published a report titled Putin: World Conservatism’s New Leader. It promoted Putin as the global saviour of traditional values. The report said ordinary people across the world are yearning for the stability and security offered by traditional values. It said people regard multiculturalism with suspicion. Dmitry Abzalov, a spokesman for the think-tank, told the press that ‘it is important for most people to preserve their way of life, their lifestyle, their traditions’, and because of that they ‘tend toward conservatism’.

Putin is by no means the first major Russian figure to question the West’s commitment to its own civilisation. Aleksandr Solzhenitsyn, in his famous address to students at Harvard University in 1978, put things even more bluntly. This Russian dissident, then an exile living in the US, was appalled by the nihilism and weariness that dominated Western societies. ‘The Western world has lost its civil courage, both as a whole and separately, in each country’, he warned his Harvard audience. He observed that ‘such a decline in courage is particularly noticeable among the ruling groups and the intellectual elite’. Solzhenitsyn’s lament for an elite that had lost its way highlighted a problem that America’s media and cultural institutions preferred to ignore. Forty years later, the estrangement of Western elites from their own civilisation has become one of the big issues of our time.

The flight of the elites

Some critics of Trump went so far as to accuse him of treason because he dared to criticise members of American institutions in front of Putin. Trump clearly felt that he had more in common with his Russian interlocutor than with his political opponents back home. And yet this means his behaviour is no different to that of Britain’s Remainer policymakers and politicians who openly side with their EU colleagues and do their best to undermine and humiliate their Brexiteer compatriots. They always make clear that they have more in common with their co-thinkers in Europe than they do with the alleged Little Englanders and xenophobes who voted for Brexit. Some even threaten to leave the UK after Brexit and settle in one of the more ‘enlightened’ EU-affiliated states.

The divisions exposed by Brexit and the Culture War more broadly highlight a rarely discussed but dramatic political development: the de-nationalisation, and maybe even the de-territorialisation, of much of the West’s political class.

Superficially, this trend towards the de-nationalisation of the elites seems to be a consequence of the process of globalisation. Commentators argue that as global networks displace national ones, supranational institutions naturally attract the best brains. Entrepreneurs, scientists and academics begin to think more and more globally, and therefore become far more casual, and sometimes even disdainful, towards their national affiliations.

However the de-nationalisation of the elites is not driven simply by globalisation. More importantly, the elites feel politically and culturally estranged from their own national institutions. They find it easier to get things done through international networks. Many English MEPs feel they have more in common with a French colleague than they do with the voters who elected them. Back home, the cultural elites are increasingly detached from the lives and outlooks of less fortunate citizens. One of the first commentators to draw attention to this trend towards the de-nationalisation of the elites was the American political philosopher Christopher Lasch. He wrote in 1995:

‘Those who covet membership in the new aristocracy of brains tend to congregate on the coast, turning their back on the heartland and cultivating ties with the international market in fast-moving money, glamour, fashion, and popular culture. It is a question whether they think of themselves as Americans at all. Patriotism, certainly, does not rank very high in their hierarchy of virtues.’

Lasch noted that, in stark contrast to their lack of enthusiasm for patriotism, this new aristocracy readily embraced the values of multiculturalism and diversity.

Through the Culture Wars, this detachment of the elites from the institutions of the nation has intensified. Since the 1990s, the psychic distance between the elite outlook and national sensibilities has been widening. The cultural elites are drawn more and more towards identity politics, but they regard their national identity as no big deal. Those sections of the elite that are charged with overseeing international affairs and foreign policy often share the cultural outlook of their peers in the political establishment. And since their sensibility, like the rest of the elite’s sensibility, is increasingly sympathetic to the transnational rather than the national, their ability to pursue the national interest in global affairs is hampered. Their behaviour as geopolitical actors becomes unpredictable and confused. The tragedy of half-baked humanitarian intervention in Syria serves as testimony to the mess that can be created by a diplomacy that finds it difficult to distinguish between transnational cultural rhetoric and national interests.

When diplomacy and geopolitics come to be entwined with the Culture War and identity politics, the outcome will not be good. The polarised political landscape that the Culture Wars have created at home is bad enough. But when such cultural division is internationalised, drawing in more and more foreign actors, it can have far more explosive consequences.

Cultural disputes over lifestyles and values are extremely difficult to resolve because they are so intimately linked to basic moral questions about right and wrong. Such conflicts are rarely susceptible to pragmatic solutions, and can therefore easily spiral out of control. To avoid this happening more in global affairs, we need to find a way back to a geopolitics that openly avows national interests rather than heated cultural rhetoric. But for that, we will need political leaders who see themselves first and foremost as leaders of their nations.