The Thai cave rescue is humanity at its finest

This daring rescue mission is achieving the seemingly impossible. 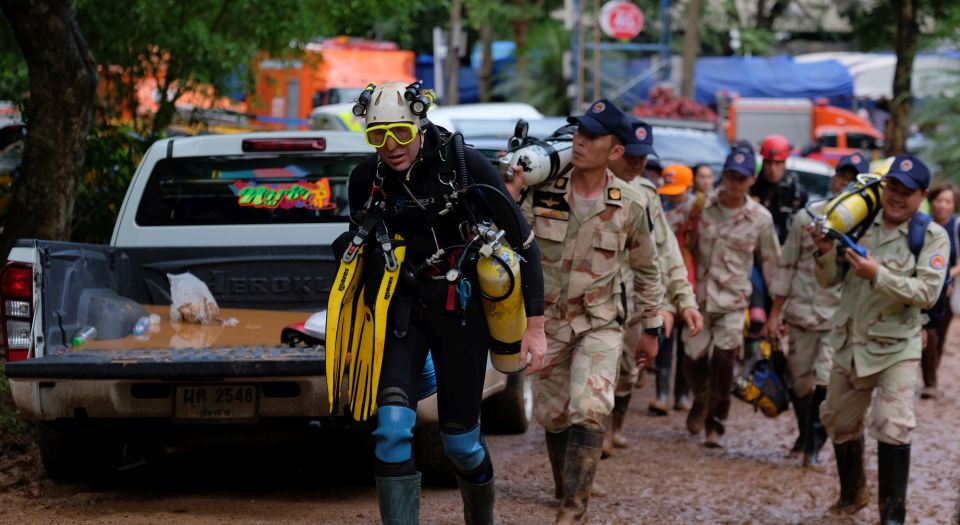 The ongoing rescue of the Wild Boar football team from the depths of a cave in Thailand has truly captured the world’s attention – and for good reason. The boys, aged between 11 and 16, and their football coach entered the Tham Luang cave complex on 23 June. A sudden storm flooded the caves and trapped them 2.5 kilometres from a viable exit. Now an unparalleled, complex and dangerous rescue operation is underway.

Just days ago, the Thai navy expected a rescue mission to take up to four months. Initial plans were for the boys to wait it out while enough water could be drained for them to wade out to safety. Around 1,000 litres is being drained per hour, which reduces the water level by just one centimetre at a time. The painstaking process has been set back by downpour. Rescuers are also drilling hundreds of shafts to drain water from the caves. The suggestion that a hole could be drilled directly to the boys was a non-starter – the ledge the boys are sheltered on is 600 metres below the earth and it is impossible to pinpoint their exact location without a detailed survey of the caves. With further monsoon rainfall imminent and oxygen levels in decline, the authorities were pushed to mount a more dramatic rescue.

The operation was dubbed ‘mission impossible’ by Narongsak Ostanakorn, the governor of Thailand’s Chiang Rai province and head of the joint command centre coordinating the rescue. He announced that cave divers would make an 11-hour round-trip, with two divers accompanying each boy on their return. The dangers of diving through the caves were illustrated by the death of the former Navy SEAL, Saman Kunan. Despite his diving experience, he drowned on his way back from supplying oxygen to the boys.

The boys, on the other hand, had no diving experience at all – some were even unable to swim. They began rudimentary training sessions just a week before the final stage of the rescue operation. While guided by experienced divers by a rope, each boy has to make a treacherous journey, diving through muddy water, climbing up caverns and squeezing through narrow crevices. Strong currents make it difficult to swim for even short periods, while the muddy water means much of the diving will be in complete darkness. Some gaps in the rocks are just 40 centimetres wide – so narrow that they will have to temporarily remove their air tanks as they swim through.

Despite its complexity and riskiness, the operation is succeeding. At the time of writing, eight of the boys have been rescued, all of whom are said to be in good health, with just four others and their coach left inside. The effort has drawn upon the skills and goodwill of around 90 cave-diving experts from around the world. A makeshift tent village holding over 2,000 soldiers, engineers, cave divers and volunteers of all varieties has sprung up at the cave’s entrance in the last week to assist the operation. Tributes have poured in from across the globe for Kunan, who will receive a royal-sponsored funeral. The rescue effort has shown humanity at its best: resourceful, altruistic and brave.

The only naysayers surrounding the endeavour are the army of mental-health experts, quick to assume the worst of the boys upon their return. Where normal human beings see the cave rescue as a happy ending, many psychologists have been quoted in the press warning that their escape is just the beginning of a lifetime of trauma. All the evidence so far, however, has shown the boys to be remarkably resilient in the face of the ordeal. Footage which emerged a week ago showed the Wild Boar team in good spirits, even after nine days in the cave.

This complex and daring mission is an important riposte to the climate of misanthropy we found ourselves in. We live in an age that sacralises safety and discourages risk, courage and endeavour. Our culture insists on the vulnerability of the human subject and overlooks people’s capacity for resilience. Senior politicians happily describe humanity as ‘obscene, perverted, cruel, uncivilised and lethal’. Scientists lament the influence of humanity on the natural world. But as the mission coordinator, Narongsak, said of the race against time to save the boys: ‘With our determination and equipment, we fought nature.’ In the rescue mission, the human spirit and human mind are winning over the cruel vagaries of nature. The operation has brought humanity’s capacity for bravery, solidarity, resilience and ingenuity to the fore. Here’s hoping, as the rescue operation resumes today, these remarkable people can indeed achieve the impossible.