Ireland: on the verge of a pro-choice revolution 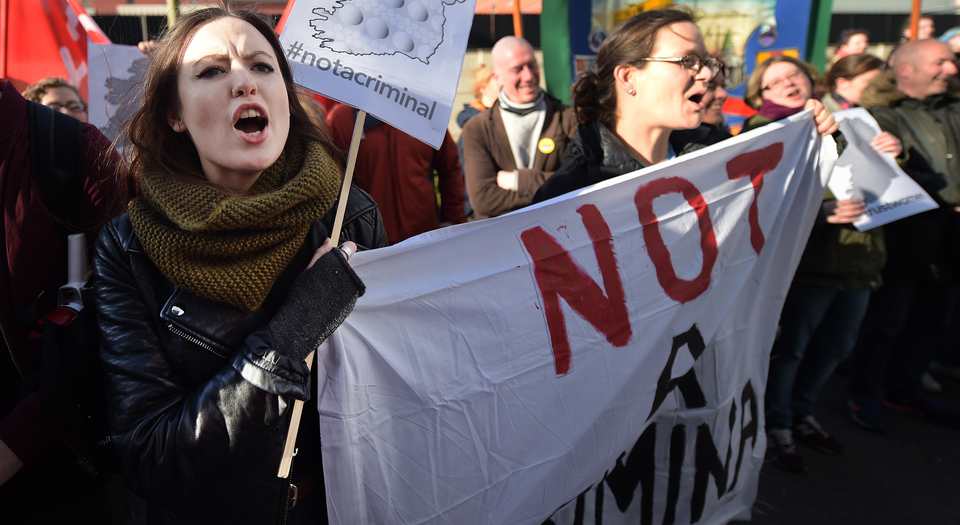 In Ireland over the past year, the argument for women’s bodily autonomy has gone from strength to strength.

Abortion law in Ireland is among the most backward in the world. The Eighth Amendment to the Irish Constitution, which guarantees the right to life of the unborn, means that abortion is illegal – even in cases of rape and fatal fetal abnormality. Introduced in 1983, largely as a response to the 1967 Abortion Act in the UK, the 43 words of the Eighth Amendment stand in the way of Irish women’s access to abortion.

But this could all be about to change. A Citizen’s Assembly, gathered by the Irish government to advise on topical and difficult subjects of law, has heard evidence from both pro-choice and pro-life campaigners, as well a host of medical and legal experts. And, after weeks of democratic and vigorous debate, 87 per cent of the 99 citizens who made up the assembly advised the Oireachtas (Irish parliament) to repeal the Eighth Amendment.

The Irish political class’s decision to outsource this issue to the assembly revealed its inability to deal with it. This has been the case for many years. Even the more left-wing parties have never held a progressive stance on abortion. (Lefty heroes Gerry Adams and the late Martin McGuinness openly stated that Sinn Féin was anti-abortion.) But, thanks to democratic pressure from the public, it seems the Irish elite’s reactionary approach to abortion law is changing.

When the new Irish prime minister, Leo Varadkar, took office in June, he quickly announced a nationwide referendum on abortion, to be held in 2018. Since then, campaigners in Ireland have been putting politicians on the spot, forcing them to clarify their position. Polls show 70 per cent of Irish citizens would now vote to repeal the Eighth Amendment, and it seems that the Irish elite is starting to take notice. Earlier this month, the Oireachtas committee on the Eighth Amendment voted to accept the Citizen’s Assembly’s recommendation to repeal the prohibition on abortion. This has put pressure on the main parties – Fine Gael, Fianna Fáil and Sinn Féin – to do some much-needed soul-searching at their party conferences in the run-up to next year’s referendum.

Much of this change has been aided by the thousands-strong marches in Dublin and across Ireland, which have received international attention. This, in turn, has sparked sister marches in solidarity across the world. Ailbhe Smyth, the convenor of the Coalition to Repeal the Eighth Amendment, an alliance of pro-choice organisations, tells me that campaigners ‘are now pushing at a door that many have long wanted open’. She argues that years of hard work from pro-choice groups like Repeal the Eighth and the Abortion Rights Campaign (ARC) have recruited ‘wonderful’ young people who want a ‘different Ireland’.

It’s true that mass protest and ingenious public stunts have helped to push abortion to the centre of Irish political debate. (When anti-abortion activist Tim Jackson began a hunger strike outside the Dail in protest, pro-choice supporters donated the price of chips and snacks to pro-choice organisations, wishing Jackson good luck.) But the fact that Ireland is now about to have a national debate on women’s rights is down to more than just protests filled with young people.

Pro-choice campaigners have succeed by framing the discussion of abortion in terms of freedom. Repealing the Eighth isn’t just about saving lives – thousands of Irish women each year either access abortion pills illegally online or travel to England to get treatment. The key point here is a political one – that women’s bodies are their own, and that they must be trusted to make their own decisions regarding their personal lives. Fighting for liberal abortion laws isn’t just about preventing tragedies (like the case of Savita Halappanavar, who died of sepsis in a Galway hospital after being refused an abortion); it is about demanding that women be treated as equal, autonomous individuals.

This is what must be front and centre of the pro-choice argument as Ireland goes into 2018. Crowing about backward Catholics and damning the older generation won’t win votes for repeal. What will work is championing and demanding freedom. And let’s not stop there. We can’t forget that repealing the Eighth won’t even bring Ireland in line with the limited freedom that English women enjoy under the 1967 Act. And what about our sisters in the north of Ireland, who also face illiberal and punitive abortion laws?

The pro-choice movement in Ireland has put bodily autonomy at the centre of political debate; now let’s win the argument for autonomy across the board, for all.