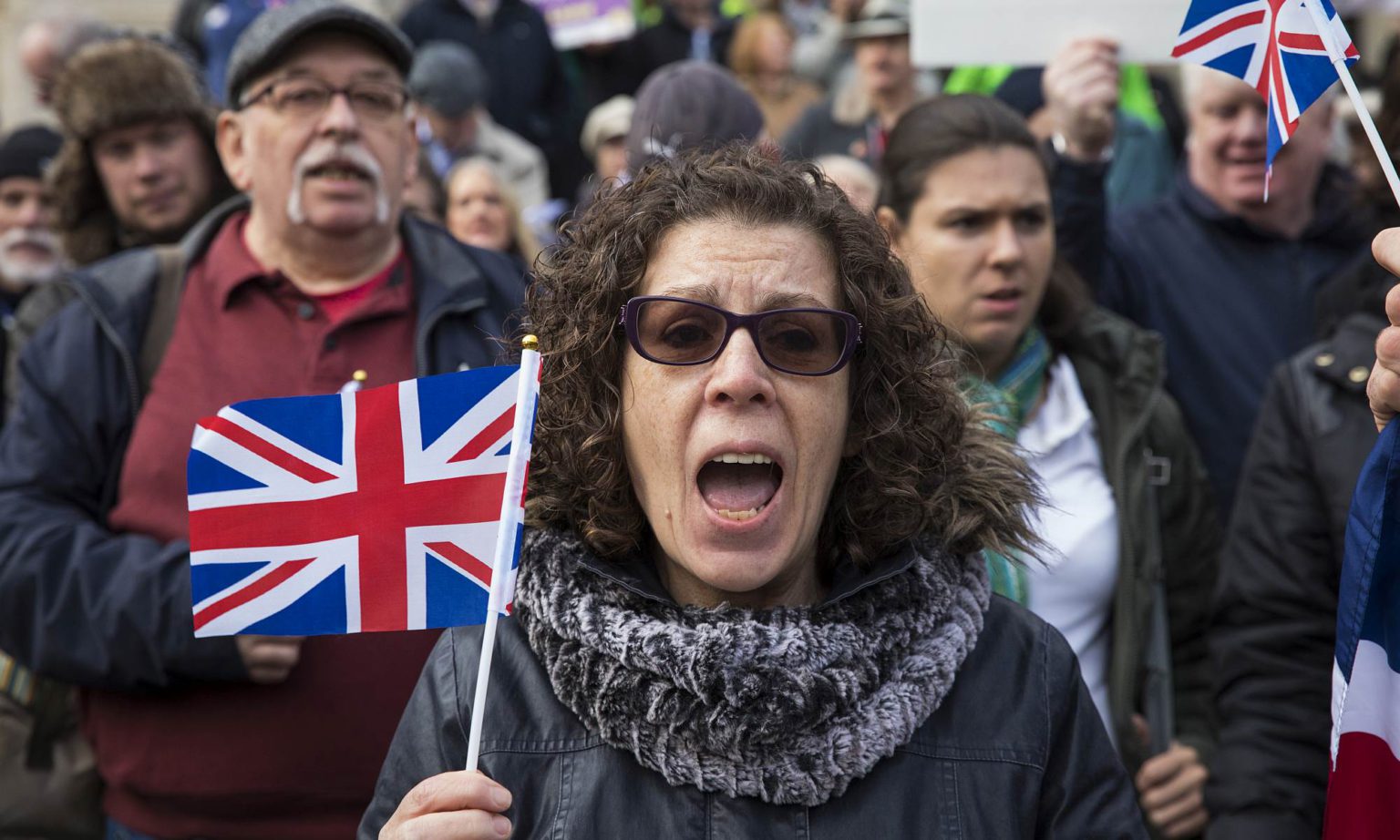 The roots of populism

David Goodhart’s The Road To Somewhere is a compelling critique of elite-based politics.

Couplets have their place in political analysis providing they do two things: describe the forces behind political debate and outline a way of transcending them. In other words, a useful couplet needs to be able to address the past and present, and the future. In The Road to Somewhere, David Goodhart gives us a new couplet: the ‘Anywheres’ and the ‘Somewheres’. It is a schism of values and identities that, he argues, accounts for the Brexit vote, the election of Donald Trump, the decline of the centre-left and the rise of populism across Europe.

The Anywheres and Somewheres both ask themselves the same question: what do they want from society and how do they get it? But they come up with radically different answers. The Anywheres want to get on in the world and to do this they place ‘a high value on autonomy, mobility and novelty and a much lower value on group identity, tradition and national social contracts (faith, flag and family)’. As Goodhart says, ‘work, and in fact life itself, is about individual self-realisation’. He describes the Anywhere ideology as that of ‘progressive individualism’.

The Somewheres also want a better life, but their forum is local rather than global and their means of obtaining it is more family- and community-focused, rather than workplace-based. The Somewheres feel uncomfortable about ‘an achievement society in which they struggle to achieve’. Goodhart rejects the dismissive view of many social commentators that this strata of society is reactionary, racist or xenophobic (although he recognises that such elements exist on the fringes). Indeed, he describes them as ‘in the main, modern people for whom women’s equality and minority rights, distrust of power, free expression, consumerism and individual choice, are part of the air they breathe’. He describes the Somewhere ideology as socially conservative and communitarian which can be summed up in the phrase ‘decent populism’.

The schism between Anywheres and Somewheres has been most pronounced over immigration. This was the issue which caused Goodhart to question his own Anywhere ideology when, in 2004, as editor of the centre-left current-affairs magazine, Prospect, he wrote an essay, ‘Too Diverse?’, that questioned the benefits of mass immigration. Despite being accused of ‘nice racism’ and ‘liberal Powellism’, Goodhart continued his studies and became convinced that the left had got on the wrong side of the argument on both mass immigration (too enthusiastic) and integration of minorities and national identity (too indifferent).

But The Road To Somewhere does far more than merely address the issue of immigration, central though that is to the Anywhere/Somewhere divide. For Goodhart recognises that what gives the divide its political significance today is the fact that ‘until 30 or 40 years ago, the Somewhere worldview remained completely dominant. It was British common sense.’ Whereas today Anywheres, who he places as numerically no more than 25 per cent of the British population, have come to dominate public policy and thinking. Each of these policy headlines of the past decade or so shows how marginalised the Somewhere viewpoint has become: the 2003 decision to open the British labour market to people from eastern Europe (seven years before the EU required it); the 2007 decision to allow Romania and Bulgaria to join the EU (pushed hard by Tony Blair initially against the wishes of the European Commission); support for more economic integration as represented by the TTIP trade negotiations; support for gay marriage; the big increase in foreign aid; the large subsidies for renewable energy and the relentless increase in petrol duty.

And in addition to the policy headlines, Goodhart notes how the prevailing view that has informed public policy for the past few decades has been that of the Anywheres, particularly with regards to education, work and family. Higher education has expanded (good for Anywheres), while vocational education and apprenticeship provision has declined (bad for Somewheres). Educational success has been elevated into the gold standard of social esteem, while those with fewer qualifications seek jobs that could and increasingly are being done by a keen foreign workforce – by exporting factories and importing labour (good for Anywheres but bad for Somewheres).

Anywheres have also dominated family policy so as to give Britain ‘one of the most family-unfriendly tax and benefit regimes in the developed world’. Goodhart traces this back to 1990, when Nigel Lawson had wanted to retain a tax allowance that did not penalise single-earner couple households. But Margaret Thatcher’s ‘one feminist policy intervention’ appears to have been her ‘pronounced lack of sympathy for mothers who stayed at home to look after their young children rather than going out to work’. This resulted in an ungenerous tax allowance for couples that waned until abolished by Gordon Brown in 2000. Since 1990, single-parent households have been financially incentivised, particularly when claiming welfare benefits.

Goodhart’s use of the Anywhere/Somewhere couplet is particularly illuminating when applied to family policy for it highlights how Anywhere ideas have benefitted the Anywheres, while undermining the interests of Somewheres. Goodhart explains how family policy ‘has been dominated by the concerns of highly educated, upper-professional Anywhere women’ with interests in workplace equality, whereas Somewheres have a greater interest in sustaining family life. Changes in family life and the ideas and policies that have driven them have been good for Anywhere men and women, who have tended to benefit from double-income, stable family households.

The family policies that have benefitted Anywheres have also caused Somewheres to experience a far greater incidence of family breakdown, single parenthood and welfare dependency. Somewhere men, without the esteem derived from high-status careers, are particularly in need of family responsibilities to motivate them and would benefit from financial incentives and ideas that bolstered the traditional family unit. Consistent with this need, opinion surveys show that Somewhere men and women did not expect sex equality to result in ‘the complete abolition of the gender division of labour, including the idea of the man as main (but not sole) breadwinner when children are young’. Accordingly, while Somewheres talk about ‘the central importance of the conventional family’, they are frequently unable to practise it as the institution that is so important to them has been weakened by government ideas and policies.

The Road to Somewhere will make uncomfortable reading for the 25 per cent of Anywheres who have pursued their own self-interest with little regard for the interests of the 50 per cent of Somewheres (and the rest, whom he calls the Inbetweeners). They will be discomforted because, as Goodhart notes, ‘the two value clusters… are clearly visible in a host of opinion and value surveys’. Indeed, his analysis will help to explain why in 2016, Anywheres lost the EU referendum in Britain and the presidential election in America and more generally why they see before them a society that they find difficult to understand.

But, and it is an important but, Goodhart does not develop his argument so that his reader can begin to understand how the schism of values, ideas and policies – a schism that is prevalent across the Western world – can be overcome. Goodhart frequently refers to ‘anywhere over-reach’, which he hopes can be addressed with his ‘plea for a less headstrong Anywhere liberalism’. Yet the reaction of Anywheres to Brexit and Trump shows that pleading with them to listen to Somewheres and ameliorate their policies will achieve nothing. His hope for ‘a happier co-existence’ between Anywheres and Somewheres ‘after the shock of 2016’ is not likely to be fulfilled with ameliorating pleas.

The strength of Goodhart‘s book is that he has invented labels that describe real social forces in modern Western societies. And an awareness of the ideological conflict between Anywheres and Somewheres may help policymakers to recalibrate their thinking. But people treasure their values and policies, especially ones that connect with their own self-interest and perception of what they want from society and how to get it. They will not give them up lightly.

Fortunately, Western societies have a mechanism for transcending conflicting values: it’s called democracy and it needs to be re-energised. Goodhart does not spell out the extent to which Anywheres are wary of, if not hostile towards, democracy. Yet his book contains much information from which such a conclusion could be drawn. He criticises the Anywheres who claim that the nation state is unable to stop the march of globalisation – a way of rendering political debate pointless. He states that Anywheres tend to be less politically tolerant than Somewheres – a way of avoiding political debate. He observes the Anywhere penchant for claiming the moral high ground from which they dismiss Somewheres as racist, nativist or for holding less worthy views – a way of closing down political debate. And he notes how Anywheres have set up and then controlled technocratic, legal and supra-national organisations – a way of putting policy beyond political debate.

The reality of the Anywhere ascendancy is that it has come about by neutering democracy. That was the only way that 25 per cent of the population could usher in policy after policy that suited their interests while impoverishing, materially and ideologically, the majority. Brexit, Trump, the decline of the centre-left and the rise of populism across Europe all represent a significant backlash against the Anywhere ascendancy. But if democracy is to serve the interests of all its people, the people will need to do more than ‘plea for a less headstrong Anywhere liberalism’. Goodhart’s book is a compelling critique of 21st-century Western politics. The task for his readers is to develop ideas, policies and new political parties that can meet the needs, not of the 25 per cent, but of the entire demos.

Jon Holbrook is a barrister and co-author of Global Governance: the Challenge to the UK’s Liberal Democracy, published by Policy Exchange. Follow him on Twitter: @JonHolb

The Road to Somewhere: The Populist Revolt and the Future of Politics, by David Goodhart, is published by C Hurst and Co. (Order this book from Amazon(UK)).