The anti-populist rhetoric of the elite is now off the scale. 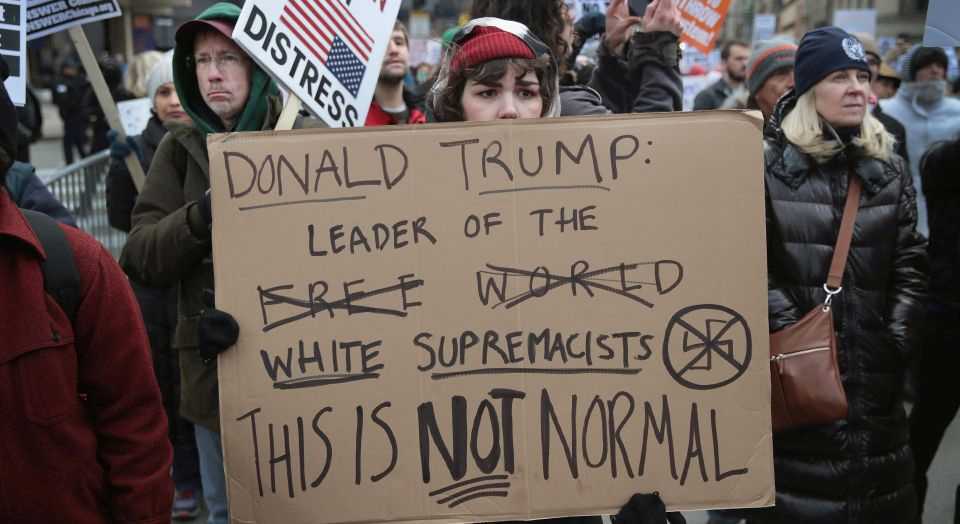 In 2016, it became clear just how debased the language of public life has become. This year, language was rarely used to communicate ideas or mount a serious argument. Rather, in the run-up to the EU referendum in Britain, both sides used vacuous hyperbole that they didn’t really take seriously. And in the American presidential debates, politics became a pantomime, with both of the main protagonists making little effort to rise above the levels of insults and invective.

Even George Orwell, who wrote at length about the degradation and manipulation of public language, would have been shocked by the terms and tone of political debate in America and Britain this year. In his famous 1946 essay ‘Politics and the English language’, Orwell observed that, ‘in our time, political speech and writing are largely the defence of the indefensible’. He was particularly perturbed by the way political rhetoric was deployed to obscure reality.

The degradation of public discourse, and the use of words to mystify, distract from and evade certain issues, has been a feature of political life for some time. Today, terms like ‘evidence-based policy’ and ‘best practice’ are used to depoliticise decision-making. Technocratic management-speak means politicians don’t really have to take responsibility for their actions. Words like ‘empowerment’ and ‘support’ invariably signal their opposite: yet more bureaucratic intrusion into people’s lives. The poor have been rebranded ‘the vulnerable’, meaning that social policy has been displaced by a more medicalised form of therapeutic governance into the lives of less well-off.

More recently, however, political jargon hasn’t only been about obscuring the issues at stake. Increasingly, new political language is driven by a desire to alter people’s actual values and attitudes, through altering the meaning of words and drawing up new speech rules. In recent decades, the language, values and ideals of the West’s political and cultural establishments were rarely challenged explicitly. That changed this year, as public hostility towards elite values gathered pace. As a result, in 2016 the urge to police speech, and by extension what values people hold, acquired an unprecedented momentum.

The war of words

As I argued in my book The Politics of Fear: Beyond Left and Right, the language of public life often tells us a lot about how politically healthy or exhausted a society is. Some of today’s most widely used terms by policymakers — diversity, transparency, social inclusion, ‘adding value’, stakeholders, sustainability — lack substance and precision. And yet despite their vacuous character, these terms have been unquestionably adopted by many people. The widespread use of technocratic verbiage, and the loss of an ideas-led public language, is testimony to the formidable cultural power of certain institutions — in particular the media and the academy, where many of these terms originate.

The secret weapon of the West’s new political and cultural oligarchy is language. It may not be able to inspire people’s hearts or win political arguments — but it can still exercise a disproportionate influence over the use of language. Language and the policing of verbal communication have become crucially important for guiding behaviour and shaping attitudes. The suppression of certain words and the invention of new ones have become integral to the broader project of social engineering. That’s why so much energy is devoted to linguistic policing and the codification of new terms, especially on campuses.

In their fascinating study, Forbidden Words: Taboo and Censoring Language, Keith Allan and Kate Burridge argue that where traditional censoring activities were about maintaining the status quo, what came to be known as PC language was more about promoting political and social change. The attempt to change language was motivated by the objective of changing how people behave and how they identify. Allan and Burridge observe that campus policing has been ‘extremely successful in getting people to change their linguistic behaviour’. Altering linguistic practice serves as a prelude to changing the way people think, and finally the way they act.

Many critics of PC codes concentrate their fire on the practice of coercing people to adopt a language that feels alien to them. Often, the criticism of PC gets sidetracked by ridiculous examples, such as when phrases like ‘Chinese whispers’ are pathologised on the basis that they are racist. But what is really significant about linguistic policing is not its tabooing of certain words but the constraints it imposes on free and spontaneous communication. That ‘appropriate’ and ‘inappropriate’ have become the keywords in the university censor’s dictionary is a reminder that very few words can now be assumed to be beyond contestation.

Consider the recently invented phrase, ‘post-truth’. It has been selected as word of the year by Oxford Dictionaries. According to the Oxford University Press, after the Brexit referendum and the US presidential election, the use of ‘post-truth’ sky-rocketed.

How did the term ‘post-truth’ acquire such a large public profile? This is not a phrase that emerged from the conversations of everyday life. Most people do not use it — at least not yet. Unlike ‘awesome’, ‘chilled out’ or ‘cool’, words whose origins are in the linguistic practices of ordinary people, ‘post-truth’ is the invention of individuals who are part of the political and cultural elites. If its use has ‘sky-rocketed’, it certainly wasn’t in pubs or the workplace that this happened.

What is significant about ‘post-truth’ is that it is a means of designating which values are legitimate and which are not. Post-truth is not simply a descriptive or standalone word. Its usage sends a wider message, which is that everything that happened in 2016 was fundamentally flawed because it was based on false assumptions. The rhetoric of post-truth is intended to delegitimise the values and outlook of those people who dared to challenge the worldview of people in power. Having failed to win the battle of ideas directly, they manipulate language to try to undermine certain public views.

Cultural power over language is incredibly important for the establishment, and may even help to nullify the setbacks it suffered in 2016. Significantly, this year the holders of power also devoted a lot of energy to pathologising the term populist. Populism, which the Oxford English Dictionary defines as the ‘policies or principles of any of various political parties which seek to represent the interests of ordinary people’, has been awarded an entirely negative meaning by the cultural elites. The demonisation of populism has been so successful that even supporters of causes associated with ordinary people are now reluctant to defend the term.

Yet the devaluation of the term populism strikes at the very heart of public life. When the attempt to give voice to the aspirations of the people is treated entirely negatively, then the moral status of democracy itself is called into question. And that is precisely what happened in 2016. Observers now regularly question the virtues of democratic decision-making. Though the oligarchical ambitions that fuel this critique of democracy are rarely made explicit, the language used to vilify the demos has become increasingly unrestrained.

The crime of whiteness

The demonisation of the word populist has been accompanied by a transformation in the meaning of the word ‘white’. There was a time when white referred to a colour or a group of people with relatively light skin. But now it has come to be associated with malevolent qualities. ‘White man’, ‘white people’ — these are no longer descriptive words but rather speak to some kind of transcendental evil force. ‘This is about whiteness’, said Berkeley students during a protest this year, confirming how ‘whiteness’ has become a way of saying ‘wicked’.

The word white is now used by commentators in a similar way to how other race-related categories were used by racial thinkers in the past. And the evilness of ‘white’ continues to intensify, it seems. In 2016, it was no longer sufficient to attribute to light-skinned people an all-embracing sense of ‘white privilege’; no, we also saw widespread condemnation of so-called ‘white supremacy’. Suddenly people with countercultural views were not simply denounced as populist; many of them were also called white supremacists.

This redefinition of the word white projects on to others a pathologised identity. Advocates of the idea of whiteness claim white people must be reminded that their identity depends for its existence on the ‘othering’ of non-whites. This construction of a white identity based on negative qualities has been assisted by sections of the media that now use the word white with a sneer. In the aftermath of the election of Donald Trump, ‘white woman’ came to mean betrayal and moral turpitude, because many white women voted for Trump over Hillary; the term ‘white men’, and in particular ‘old white men’, now has an entirely negative meaning.

The new rhetoric of whiteness has little to do with confronting the problem of racial injustice. Rather, it is part of a war of words designed to diminish the moral status of those who dare to challenge elite values. The image of an army of elderly, populist white men who must be countered and kept in check flatters the self-image of an otherwise morally disoriented elite which increasingly relies on the policing of language over winning arguments.

The war of words is not over. However, we should not respond to their spiteful anti-people rhetoric by adopting the equally childish language of someone like Trump. Instead, those who care about the quality of public discourse must raise the quality of discussion by engaging in a battle of ideas. There is no better place to start than with restating the case for popular sovereignty, freedom and tolerance. Let’s ensure that Oxford Dictionaries’ word of 2017 is demos.

Frank Furedi is a sociologist and commentator. His latest book, What’s Happened To The University?: A Sociological Exploration of its Infantilisation, is published by Routledge. (buy this book from Amazon(UK)).