He’s repulsive, but he shouldn’t be sent to prison. 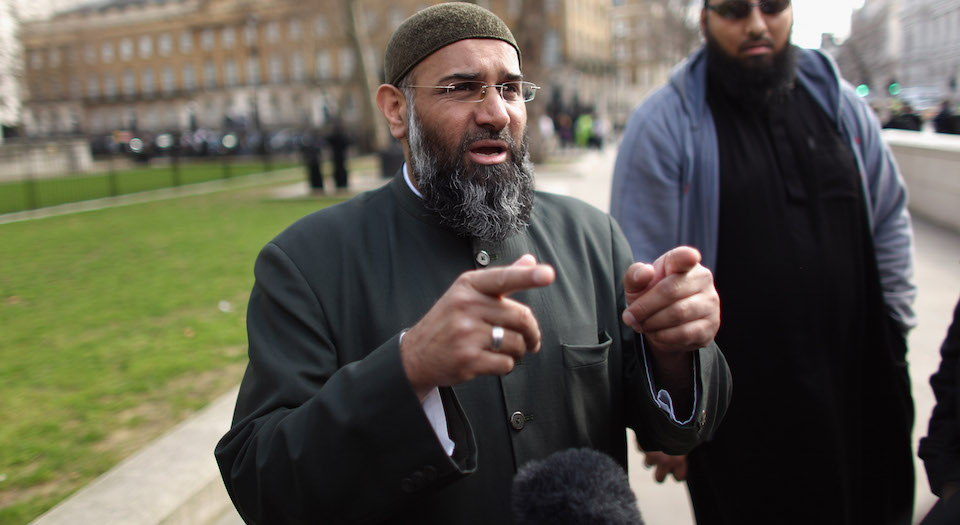 In Britain in 2016, a man faces jail for what he thinks. For what he says. His crime was not to harm another person or damage property, but to subscribe to a warped ideological view of the world. That is, he committed a thoughtcrime, and he’s being punished for it. His name is Anjem Choudary, the infamous imam, finger-wagger extraordinaire at what he sees as the sinful West and its decadent kuffar inhabitants, and however much it sticks in our craw we must demand that he not be sent to jail, and that his conviction be overturned. Not so much for his benefit as for ours, and for the hard fought-for principle that individuals should never — but never — be punished by the state for what they think and say.

Choudary, a clown of an Islamist hothead, a bin Laden without the balls, looking like he wandered off the set of Chris Morris’s Four Lions, has been convicted of supporting the Islamic State. He could be jailed for up to 10 years. A lawyer turned preacher, he’s long been a favourite of media outlets like the BBC, who’d wheel him on as the Islamo-bogeyman we could all collectively tut-tut over. He’s been spouting intolerant nonsense for years. First in al-Muhajiroun, a weird network that called for the imposition of Sharia law in Britain and praised 9/11. This meant the group could be proscribed in 2010 when new legislation was passed making it a crime to ‘glorify’ terrorist acts: a deeply censorious law that punishes, not acts, but opinions about acts. But over the past couple of years, say the authorities, Choudary went ‘too far’ when he started bigging up ISIS.

It is extraordinary the extent to which Choudary has been punished for his thoughts and words. This entire case hinged on the fact that Choudary thinks abhorrent things. Consider the BBC’s report about his conviction. It calls him ‘one of the most dangerous men in Britain’: ‘Not a bomb-maker. Not a facilitator. But an ideologue, a thinker… In his head there can be no compromise, no meeting of minds. Liberal democracy, personal freedom, the rule of law mandated by the people is all an affront to the will of Allah.’ In short, Choudary’s offence was not to plant a bomb, or even to ‘facilitate’ the planting of any bombs (as the BBC account says, ‘if he saw a bomb recipe he wouldn’t have known where to start’). No, his offence was to be ‘a thinker’; it was to ridicule liberal democracy and the rule of law. He has been convicted for, in the BBC’s candid but uncritical words, what lurked ‘in his head’ — his ideas. This should concern everyone who believes in freedom.

There was no evidence Choudary had organised violent acts or financially supported the Islamic State. Instead, it was revealed that he had sworn allegiance to ISIS in ‘a curry house in east London’ with his ‘closest aides’: that is, he had a sad, bravado-filled but fundamentally private conversation over a biryani. And the prosecution also quoted from various of his YouTube lectures, in which he said things like ‘[We] should dominate the whole world by Islam’ and one day Hackney and Walthamstow will be ‘under Sharia’. These are opinions, bluster. He had no plans, and in fact no prospect whatsoever, of making these thoughts a reality. He’s being punished for being a fantasist.

One of the prosecution’s claims was that Choudary ‘radicalised’ people. His lectures apparently turned impressionable young Muslim men into killers. One of the killers of Lee Rigby was a fan of his nutty talks. Others who listened to him later went to Syria to join ISIS. But unless we are going to give up entirely on the idea of free will, then we must argue that Choudary is no more responsible for these individuals’ behaviour than the right-wing, anti-mass migration newspaper columnists cited by Anders Breivik are for his atrocity, or the authors of the Bible are for every mad killing carried out by fans of that Good Book. Rigby’s killers, the trekkers to Raqqa: these people made a free decision. Punishing speakers or authors for what others choose to do upon hearing or reading their words is a dangerous game. Through the idea of ‘radicalisation’, the notion that apparently passive individuals can be infected with wickedness by the rantings of Islamo-hotheads, we’re witnessing the rehabilitation in anti-terror terms of the deeply censorious idea of ‘moral pollution’. Where the book-burners of old wanted to save our souls from moral corruption, today’s jailers of the offensive hope to protect minds from the ‘radical’ germ.

This cuts to one of the key problems with Choudary’s conviction: it is a displacement activity, a legalistic performance of toughness against the problem of Islamist extremism in place of any serious ideas for how to confront the growing influence of such anti-Western, anti-liberal ideas among young Muslims, and others. How much easier it is to hold up the likes of Choudary as infectors of minds than it is to ask what it is about 21st-century Britain that means a significant number of our young people can be drawn to profoundly unenlightened thought. The showy conviction of Choudary, ridiculously branded ‘the most dangerous man in Britain’, is a sad stand-in for tackling the crisis of British values and liberal thought, which is so strong that we’re losing — rather than Choudary actually winning — young people to a depressing, death cult creed.

But that is the nature of censorship: it is always about avoiding the issue, opting for silence over discussion. And in this way, it always makes political problems worse. There’s a deeply important principle here: freedom of speech must extend even to the most hateful people, even to those who are anti-freedom, because it is only through confronting such individuals that we might defeat their arguments in the eyes of others and also get better at articulating our side, the superior side — in this case the side that is anti-ISIS, pro-freedom, pro-democracy. What cowardice it is to jail Choudary rather than take him on in the realm of democratic debate. In the name of hiding away his ugly ideology we actually embrace its ugliest aspect: its illiberalism, its desire to punish dissenters or blasphemers. What Choudary dreams of doing — smashing freedom of thought and demanding conformity to his ideology — is done by the British state to him. In seeking to solve the Choudary problem, we become like Choudary: how depressing.

Yes, it’s hard to defend freedom for freedom-hating misanthropes. But fighting for freedom is always hard. As HL Mencken put it, ‘The trouble with fighting for human freedom is that one spends most of one’s time defending scoundrels. For it is against scoundrels that oppressive laws are first aimed, and oppression must be stopped at the beginning if it is to be stopped at all.’ So say it loud, and say it clear: free the scoundrel Anjem Choudary.

Brendan O’Neill is editor of spiked. He is currently on a speaking tour of Australia, talking about PC, free speech, Brexit and other issues. For more information, click here.