The bigotry of elites who sneer at those who back The Donald. 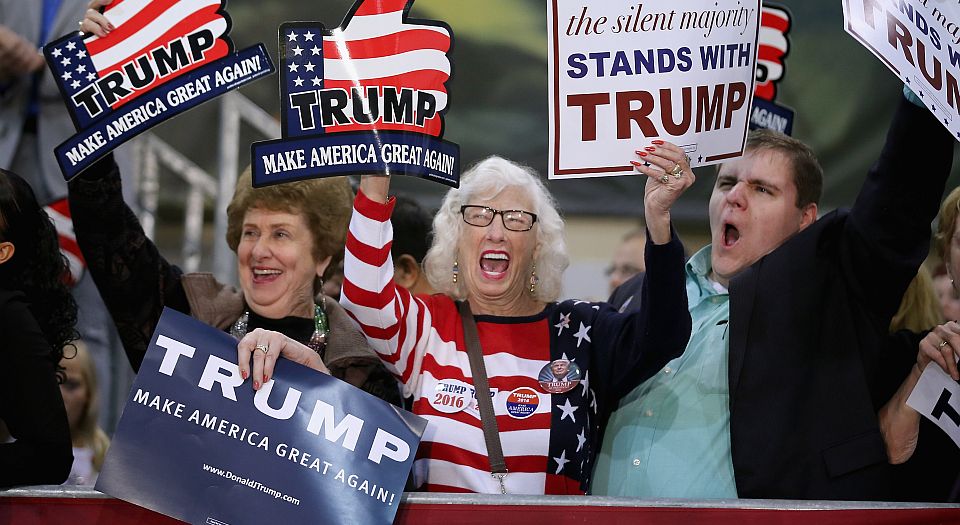 On the eve of the first presidential nomination contest in Iowa, the main story is Donald Trump, just as it has been for the past six months. Even if the polls don’t hold up and Trump doesn’t win the Republican caucuses in Iowa, he will have done better than anyone expected six months ago, and will not be going away anytime soon.

As the chances of Trump winning the nomination have risen, the media have taken to scrutinising his supporters, who have propelled him to the top of the Republican polls, much in the way of anthropologists who study an exotic tribe. And many have concluded that the typical Trump voter is even scarier than the man himself.

Based on polls that found that perhaps eight out of every 10 Trump supporters lack a college degree, analysts find that Trump’s backers are dumb. As a writer for Gawker explained, ‘The profound stupidity of [Trump’s] discourse is perfectly matched to the profound stupidity of its intended audience’. The Washington Post gathered psychologists to examine the average Trump supporter. Their diagnosis? Trump’s fans ‘like people who tell us that our problems are simple and easy to solve’.

Many of our leading experts find that, on top of being ignorant and simple-minded, the Trump supporter is racist. The Post’s long-distance psychologists also determined that Trump followers are the kind who ‘don’t like people who don’t look like us’. According to CNN, ‘racial and economic fears’ lie behind the Trump phenomenon, with ‘no getting around’ that ‘racial attitudes are fuelling’ support for him. And some conservatives say Trump supporters are bigots. Kevin Williamson of the National Review writes: ‘Thomas Aquinas cautioned against “homo unius libri”, a warning that would not get very far with the typical Trump voter stuck sniggering over “homo”. (They’d snigger over “snigger”, too, for similar reasons.)’

Upon hearing all of these derogatory remarks thrown at them, Trump supporters might reasonably reply: tell me something I haven’t heard before. For many years, sections of the masses like the Trump-proletariat have been blamed by elites for blocking ‘progress’ in society. On the campaign trail in 2008, Obama dismissed them as those who cling to their guns and Bibles. Campaigners for same-sex marriage called them knuckle-draggers and bigots for not ‘evolving’ upon demand and dropping the centuries-old understanding of what marriage means. Indeed, much of Trump’s support comes from people wanting to kick back against the condescending views they experience from those on top – like being told they are dumb and racist. Saying you are for Trump is a way of saying ‘fuck you’ to the snobs.

Onlookers lazily see in Trump’s support a racist blob, the same old Republican Party at it again. As it happens, Trump’s followers don’t neatly fit their stereotypes. Many are from the industrial North, not just the much-demonised ‘red states’ of the South and Appalachia. Many have moderate views, and don’t feel that certain hot-button issues, like abortion, should be a priority. Many are secular, although they often are, like many of the religious, traditionalist (rather than cosmopolitan) in cultural terms. And some Trump supporters are Democrats: 20 per cent of Democrats say they will vote for Trump, and many who back him were once registered Democrats.

Trump supporters appear to be united by a number of populist and nationalist themes, but a key one is a rejection of the political establishment and cultural elite. Given that Trump is a billionaire capitalist, he is an unlikely champion of an anti-elitist cause. But in cultural terms, his supporters see an ally. Just as Trump is relentlessly mocked for his combed-over hair, his non-polished way of speaking, and his tacky style, so his supporters know that they, too, are looked down on as uncool by the coastal elites for the way they speak and dress. And when Trump is condemned by the media for these and other transgressions, his anti-elite credentials grow in their eyes.

In particular, Trump supporters seem to be sick and tired of being described by the elite as a problem to be solved. Consider the response to the terrorist shootings in San Bernardino, California.

Many, if not most, Americans concluded that something must be done to prevent a future attack. But they heard their president use most of his special TV address to implore them not to be Islamophobes – that is, their president considered them as people on the verge of a revenge-seeking rampage. They heard their president and the New York Times tell them that, after radical Islamists shoot up the town, it is they who must hand over their guns. And they heard the Washington Post condemn them, in the same week as that horrific attack, as un-Christian and un-American for even questioning the wisdom of letting Syrian refugees enter the country. They, not the radical Islamists, were seen as the problem.

Trump adherents are most often called racist for their support for his anti-immigration stances, like building a wall along the Mexico border, deporting the 12million in the US illegally, and enforcing a ban on Muslims coming into the country. But Trump backers might wonder why only they get the racist label slapped on them. Other Republican politicians share his views: candidates like Ted Cruz and Jeb Bush have also called for bans on Muslims, without the uproar. Democrats brag that ‘President Obama has the most border patrols and security deployed at the border of any previous president’, and Obama has been called the ‘deporter-in-chief’ for his record-setting number of deportations.

It is easier to dismiss Trump supporters as racist than to understand what is driving their views on immigration. Concerns about national security and cultural assimilation play a part. There is also a class element for some who fear the under-cutting of wages (a position Democrats used to take, when they listened to the industrial unions). Being pro-immigration, I think all of these reasons are misguided, but clearly you can’t put it all down to xenophobia.

In adopting such views on immigration, it is not as if Trump and his supporters are expressing a type of white nationalism, as some claim. Yes, if their views harden into such a stance, that would be a problem. But the blame for any Trump-led ‘white identity politics’, if it ever arises, would have to be laid at the door of the liberal multiculturalists, who have been drumming into us for decades how the differences between races are essential, fixed and something to be celebrated.

Trump’s supporters are expressing legitimate concerns, even if their preferred candidate is offering false solutions to them. Their lack of faith in the vision-less establishment is perfectly reasonable. Their largely working-class interests have been ignored by the elites of both major parties. They have been actively silenced by the PC cultural police. In a democracy, it is important, at a minimum, to listen to this section of society, rather than ignore them or say such views cannot be aired.

Today’s denunciations of Trump supporters as bigots are exactly the kind of put-downs that drive their resentment and drive them into the arms of Trump. Dismissing their concerns now, in this way, only strengthens their views and support for him.

You don’t agree with Trump? Fine. But don’t denigrate the people who support him. Offer them a counter-argument; offer them something that addresses their concerns and interests. Don’t insult them; inspire them, if you can.