Riots in Baltimore: a crisis of authority

The instability points to a moral vacuum in America’s inner cities. 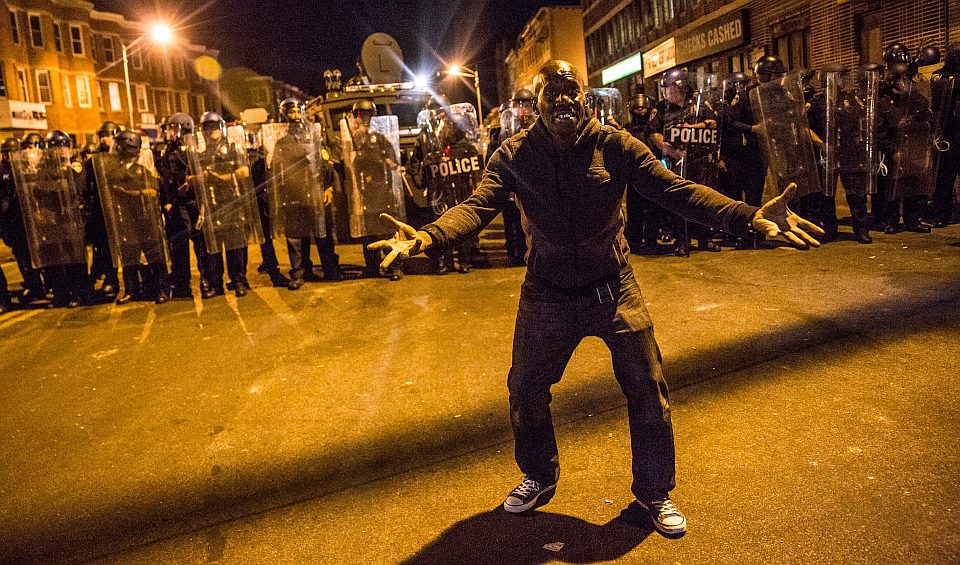 Amazing scenes from Baltimore: rioters throwing bricks at police, looting and burning down a CVS pharmacy and other stores, stomping on police cars and setting them on fire. The rioting followed the funeral of Freddie Gray, a black man who died in police custody in uncertain circumstances. The next day, National Guard in camouflage patrolled the streets, and a curfew was imposed.

The rioters also burned down a housing project for seniors and a community centre, a $16million investment by the Southern Baptist Church that was due to open in six months. It was meant to be a sign of hope in a blighted area. Reverend Donte Hickman, who worked for years on the project, said ‘my eyes have been filled with tears’. Of the arsonists, Hickman said ‘I can’t make sense out of nonsense’.

What is so sad about the degeneration of protesting over Gray’s suspicious death into rioting and arson is how self-destructive it all is. Rather than strike a blow against the police, the political authorities or ‘the system’, the rioters mainly hurt their own communities, making life worse for local people and even themselves.

And yet, despite the evident self-destructiveness, some were claiming that the rioters were ‘uprisers’ that represented a ‘rebellion’. Morehouse College professor Mark Hill Lamont told CNN that the turmoil in Baltimore was ‘resistance to oppression’ rather than rioting.

D Watkins, in a New York Times op-ed, argued that the rioting was a conscious attempt to bring about change: ‘We are all starting to believe that holding hands, following pastors and peaceful protests are pointless. The only option is to rise up, and force [Baltimore Mayor] Rawlings-Blake to make what should be an easy choice: stop protecting the livelihoods of the cops who killed Freddie Gray, or watch Baltimore burn to the ground.’ Salon commentator Benji Hart called the rioting a ‘legitimate political strategy’: ‘When we see police cars being smashed and corporate property being destroyed, we should see reasonable responses to generations of extreme state violence, and logical decisions about what kind of actions yield the desired political results.’

But there was nothing ‘political’ in the rioting and looting. It wasn’t a continuation of protests by other means. In fact, in political terms, destroying one’s neighbourhood is a big setback for those who want to have legitimate concerns about policing addressed and effect other changes.

Indeed, most people in Baltimore, including those in the deprived areas, do not see the rioting as being in any way positive or political. One resident, Clarence Cobb, told the New York Times he was heartbroken: ‘It’s sad, this don’t make no sense.’ He added: ‘It comes to a point where you just got to take pride in your own neighbourhood. This makes us look real bad as a city.’ Freddie Gray’s cousin, Carron Morgan, told a Baltimore Sun reporter: ‘This is not justice. This is just people finding a way to steal stuff.’

Many people’s image of Baltimore is shaped by the excellent TV series, The Wire, which examined the problems besetting the city from different angles. David Simon, the show’s creator, had a robust retort to those endowing the rioting with progressive content: ‘The anger and the selfishness and the brutality of those claiming the right to violence in Freddie Gray’s name needs to cease… If you can’t seek redress and demand reform without a brick in your hand, you risk losing this moment for all of us in Baltimore. Turn around. Go home. Please.’ Later, when he was accused of blaming the victim, Simon replied: ‘Looting a CVS and some liquor stores and burning a senior centre site and the backs of some Federal Street rowhouses? Yeah, I got no problem showing my contempt for that shit. Every damn day.’

As we know from The Wire and elsewhere, the people of Baltimore, like those in many of America’s inner cities, do face enormous obstacles to getting on in life. Unemployment in Baltimore is high, with more than 50 per cent out of work in certain areas of the city, and many people are poor. Violent crime is more than three times the national average, and black men are incarcerated at high levels. Relations between the population and the police are seriously strained – and that can’t be neatly blamed on race, as Baltimore has for many years had a black mayor and a black police commissioner, and 40 per cent of the police officers are black. The Baltimore Sun recently reported that ‘over the past four years, more than 100 people have won court judgments or settlements related to allegations of brutality and civil-rights violations. Victims include a 15-year-old boy riding a dirt bike, a 26-year-old pregnant accountant who had witnessed a beating, a 50-year-old woman selling church raffle tickets, a 65-year-old church deacon rolling a cigarette, and an 87-year-old grandmother aiding her wounded grandson.’ In other words, Freddie Gray’s death was seen by many as only the latest example of a deeply disturbing pattern.

These are facts. Yet it does not follow that current circumstances in Baltimore provide the ‘fuel’ for rioting or otherwise explain it. Commentary that effectively says ‘black people in Baltimore live in poor conditions, they are justifiably angry, so of course they are going to smash things up’ is patronising.

Certainly, such attempts at providing ‘context’ are not blatant celebrations of the rioting, and do not claim that the destruction is a political statement or an ‘uprising’. Indeed, most of those who express this view begin by saying ‘this is not to excuse…’, such as when President Obama said: ‘There’s no excuse for the kind of violence that we saw yesterday.’ But Obama and others then quickly move on to outline a litany of conditions that somehow are supposed to explain the rioting. This is a more subtle view, seemingly analytical and sympathetic, but it betrays low expectations of local people. And based on interviews in the aftermath of the rioting, it is not how the people of Baltimore see themselves.

Too many are claiming that the rioting was predictable and inevitable. ‘Why is anyone surprised that isolated young people from one of the poorest neighbourhoods in the country took their anger to the streets? While we don’t condone looting and violence, our only surprise is that it hasn’t happened sooner’, write two community activists from Baltimore. But rioting is not inevitable, and the determinism in this outlook denies the people of Baltimore their subjectivity. Saying ‘Well, what do you expect them to do?’ is not progressive; it is insulting.

A minority of the Baltimore population rioted. Essentially some people in Baltimore opportunistically used legitimate concerns about policing as an excuse for destructive, illegitimate ends. This does not mean that it is not serious. Attempts to downplay the rioting as no big deal, and to blame the media for covering it (like when City Council president Bernard Young says he is ‘disturbed by the way the media is focusing on the negativity of this city’), are an evasion. But it does mean that there is the potential for the majority to assert itself.

The rioting in Baltimore exposes a breakdown in social order and a vacuum of authority. Leaders, from politicians to the police, do not appear able to assert and obtain authority. They have all seemed to be caught off-guard and out of touch, especially with younger people. The police in particular lack authority. They can’t command people simply with their presence in the way they once might have done, and they now have only two modes of operation: stand by, or go in with excessive force. And after authorities in Ferguson were widely criticised, both politicians and the police are not clear on what to do.

It is not just those at the top who lack authority. Parents, pastors and other community leaders do not seem capable of taking control, either. They are all appalled that this is happening, but seem one step behind. In that regard, one mom, Toya Graham, has been rightly praised for stopping her son from rioting. In a video that went viral, Graham is seen pushing her masked son away from the crowd, slapping him on the head over and over, and screaming at him. Not all support Graham – an Occupy activist said ‘the violent mother’s actions constitute second-degree child abuse’ – but the popularity of the hashtag #momoftheyear shows that many do, and that’s encouraging, even if moms on their own can’t solve all of the problems.

Those who have visited Baltimore will know that it is, despite its problems, a wonderful city. People are friendly and will call strangers ‘hon’ (short for ‘honey’). Cuisine, culture and sports are all vibrant. The city is more than a poverty-stricken mess, and the people protesting, cleaning up afterwards and volunteering to help others are more representative than those who rioted. The people of Baltimore have the potential to achieve their aspirations. But we do them no favours, nor do we show them true support, if we gloss over what happened, dismiss residents as inevitably prone to rioting, or try to glorify destructiveness and claim it is a form of political protest.