Why liberal commentators continue to go gaga for Gaga. 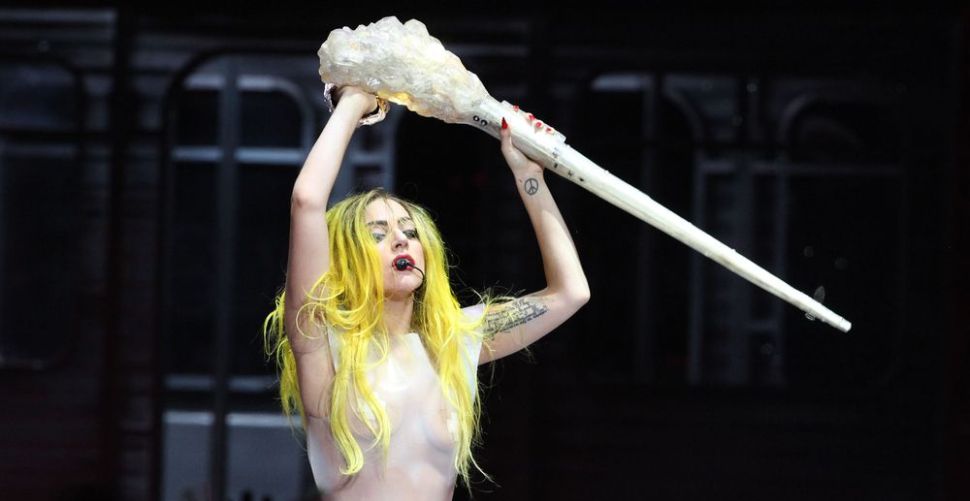 This week, Lady Gaga’s third album, Artpop, hit the shelves. And like the seedy one-nighters she so delights in recounting in her tunes, it was greeted with initial surging excitement and then inevitable, pill-dicked disappointment.

It was diplomatically received by most as a missed opportunity, falling far short of the totemic creative heights its name, its Jeff Koons-designed artwork, and Gaga’s effusive Twitter descriptions made us think it would climb.

Perhaps it’s a product of mere hype. Following the world-beating success of Born This Way, expectations were certainly high for Artpop, while a pushed-back album date due to Gaga (AKA Stefani Germanotta) having to undergo emergency hip surgery, left fans on tenterhooks. But what’s striking is how a heavy expectation of imminent greatness has followed her around since the very beginning.

Comparisons to David Bowie, Marc Bolan, and, most enduringly, Madonna, have been thrown at her since her first single (‘Just Dance’) hit the airwaves. With the release of her debut LP, The Fame, the sense that we were witnessing the birth of a new, era-defining phenom was palpable. At the time, one particularly excitable hack went so far as to proclaim her ‘the last pop star’. Yet in the pedestrian dance-pop of The Fame, and the smidge-more ambitious mix of German techno and Springsteen twang on follow-up Born This Way, this figure never materialised. All the same, amid their so-so reviews, the critics still willed her on – next time it would be different, they said.

Artpop clearly has lofty ambitions. ‘Venus’ layers references to Bottocelli’s ‘Birth of Venus’ and jazzman-cum-cosmic-explorer Sun Ra’s ‘Rocket Number Nine’ over stomping synth-pop – apparently fusing art forms high, low and middling in one fell hair swish. But it all rings a little hollow, each song eventually collapsing back into fist-pumping floor-fillers about love, fame and being young. Indeed, the title track deftly dodges any questions about what, if anything, this explosion of art forms is even supposed to achieve: ‘My Artpop could mean anything’, she trills, coyly over the chorus.

Beyond that, the tunes themselves feel like they’re trailing behind the times. Opener ‘Aura’ kicks off with throaty Lana Del Rey-esque vocals over twanging guitar lines, while the posse-cut ‘Jewels and Drugs’, with help from TI, Too Short and Twista, allows her jump on to the fading trap-rap bandwagon. The rest is safely played: all soaring synths and pounding bass. There are some gems among them. ‘Sexxx Dreams’ is self-explanatory but fun, while ‘Do What U Want’, featuring R&B’s favourite sexual deviant, R Kelly, is a standout – the two harmonising blissfully over a hammering Giorgio Moroder bass line. But mid-album, things trail off badly, serving up a slew of Guetta-level grooves and the odd dull piano ballad lumped in for variety.

In short, it’s about as solid as anything she’s ever done. Still, one is left wondering, again, what we were supposed to be getting all excited about. Has mainstream pop become so dank that we’ve latched on to Lady Gaga, purely because her GCSE performing-arts level of ‘wackiness’ is enough to set her apart? Is the hunger for another era-defining pure pop star so great that we’re willing to wait on pretenders to the throne?

Nevertheless, there seems to be something behind the desperate attempts to super-glue Germanotta’s stiletto heels to the pop-legend pedestal. In recent years, pop music has been recast as the battleground for morality, its stars becoming playthings in a proxy war between the out-of-touch elite and the braying populace, whom the elite assumes absorb their ideals wholesale from Vevo, mouths agape in dumbstruck reverence. More and more column inches have been devoted to unpicking whether or not Beyonce is a feminist, if ‘faggot’-strewn rap verses are heralding a new surge of homophobia, and if the excesses of pop videos are brainwashing kids with the false promises of materialism. When they catch a glimpse of a genuine megastar who conforms to their strict moral code, she is leapt upon and lionised – a conduit to the masses they’ve become so detached from.

In this climate, Lady Gaga emerged as a right-on wet dream. The New York private-school girl who slummed it for a few years among the waifs and strays of the cocaine-addled performance-art scene to emerge a bisexual pop diva, trumpeting the gay-rights ‘Born This Way’ slogan, making the odd shallow dig at US immigration policy, and waxing lyrical about being bullied at school and struggling to ‘be herself’ as she presides over her similarly ‘damaged’ horde of ‘Little Monsters’. In Lady Gaga was an imprint of prevalent liberal orthodoxies – that human sexuality is biologically hardwired, that America is the world’s biggest bully, and that we’re all vulnerable husks shambling through life and bearing the ineffable imprint of our background and past hardships.

Underscoring all of this is the conception of a music-buying mob in need of civilising. Reflecting on ‘Born This Way’ – by anyone’s standards a rather stale gay anthem – one reviewer wrote, ‘it might have felt too big and too obvious a disco statement, but there are heartlands out there where the track undoubtedly hit home’. As such, Gaga was elevated as a subversive force, there to shake up the mainstream and liberalise the corn-fed oiks who, remarkably, still listened to her. But, as that writer alluded, it was all rather ‘obvious’, the singer merely relaying the received ideas of polite society rather than something genuinely challenging. Gaga could never fill the shoes laid out for her, not least because she devoted as much time to inane club anthems as she did to tunes about sexual-empowerment, as well as the fact that the ideas she was spouting were far from revelatory. Rather than aimed at rocking the establishment, they merely catered to its prejudices, casting aspersions on those who she assumed didn’t share their views.

On Artpop there’s a few scant attempt at pushing buttons: the tale of a burqa-clad siren on ‘Aura’, luring a lover to explore what lies beneath the cloth, as well as some ambisexual gender-swapping on ‘G.U.Y.’. But it all comes across as similarly inconsequential.

It’s a shame, really, to harp on so much about a singer who has served up enough well-crafted, hook-happy tunes to secure herself a place in the pantheon of pop. She can be irritating and cloying in her claims to speak for thwarted outsiders everywhere, but what’s pop music without egotism? Indeed, we’d all have a much better time if commentators stopped looking to pop stars to expound their ideas, and kept all this moralistic chin-scratching off the dance floor.