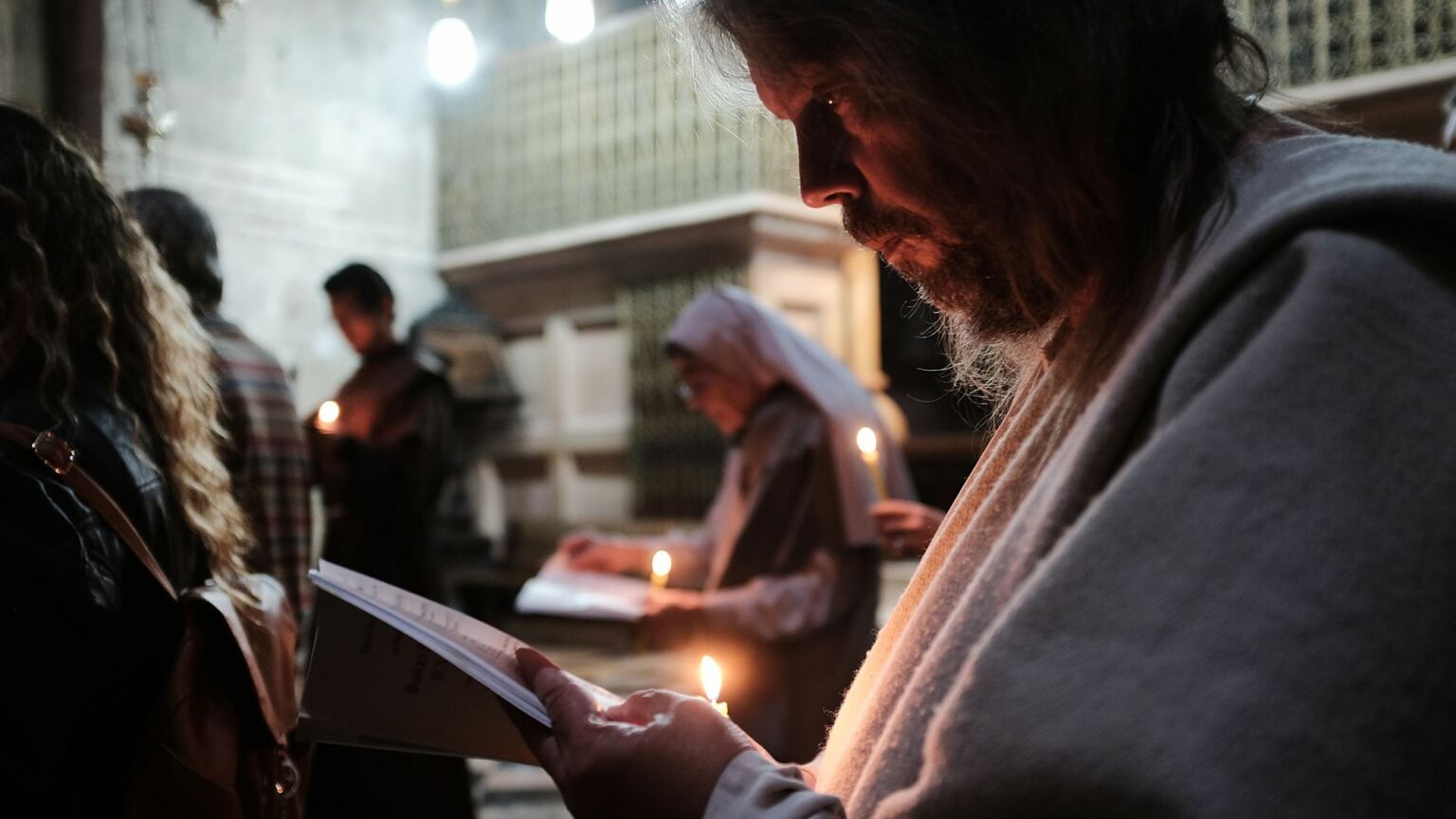 Public discussion of anti-Semitism typically focuses on its far-right variant – much less is said about its leftist form. Woke Anti-Semitism, by David Bernstein, is a welcome attempt to redress this imbalance. Bernstein is the founder of the Jewish Institute for Liberal Values (JILV), which aims to counter the illiberalism of woke ideas. He has proved to be one of America’s staunchest defenders of classical liberal notions of freedom.

He is not the first to notice the insidious trend of woke anti-Semitism, of course. There have been many important critiques in recent years. The first edition of the Sapir Journal, published in spring 2021, contained two important articles on how anti-Semitism and identity politics can intersect. And as far back as 2019, spiked’s Frank Furedi wrote about ‘Why identity politics has been so bad for Jews’.

In Britain, there have also been countless articles and several books on the phenomenon of Corbynism and anti-Semitism. However, these have tended to focus on the internecine disputes in the Labour Party, rather than the woke belief system.

As the first book-length treatment of the subject, Woke Anti-Semitism: How a Progressive Ideology Harms Jews would appear to fill an important gap. And Bernstein does a great job in exposing the toxicity and the harms of woke anti-Semitism. However, he never mounts a full-frontal assault on the ideology behind it.

Much of Woke Anti-Semitism is autobiographical. It was as a student at Ohio State University that Bernstein first encountered woke ideas in embryonic form. At a 1987 conference for Jewish students, he came across what would today be called ‘social-justice warriors’. These students insisted on politically correct language and believed in ‘celebrating difference’. They also proved wholly unwilling to debate – a rare attitude on campus at the time.

Bernstein also writes about an early encounter with the threat identity politics poses to Jews. At the UN’s 2001 World Conference Against Racism in Durban, draft documents produced by the committee painted Israel and Zionism as exemplifying the evils of colonialism. During the conference, representatives from the Arab Lawyers Union handed out pamphlets full of anti-Semitic caricatures – including images of Jews with blood-dripping fangs. They sought to portray Israeli Jews as Nazis oppressing terrified Palestinians.

Jewish progressives were shocked by the vitriol shown at the conference. It was the first time they had been subjected to racism by people who claim to be fighting racism. The hostility was so great that the US and Israeli delegations even ended up withdrawing from the negotiations, without signing the resolution. It was telling that this vile anti-Semitism had been legitimised by the ‘anti-colonial’ social-justice framework we now know so well.

As Bernstein describes these events, he makes valuable points along the way. For example, he takes on the postmodern idea of ‘standpoint epistemology’ – the notion that your expertise on a given issue is derived from your position in the power structure of society. From this perspective, not having the relevant ‘lived experience’ of oppression means someone higher up in a privilege hierarchy simply cannot understand the perspective of someone lower down. Individuals deemed ‘privileged’ are expected to defer the views of those deemed ‘oppressed’.

Bernstein shows how this logic makes it possible for organisations to cherry pick the voices of minority groups who happen to share their views. This allows social-justice warriors to insist that everyone should defer to this supposedly ‘authentic oppressed voice’ – one which conveniently happens to agree with them.

Much of the book describes how woke activists have captured key Jewish institutions in the US. In many cases, a vocal woke minority has managed to intimidate a larger, often quiescent majority.

The final three chapters detail practical ways to address this challenge. This advice is meant primarily for the Jewish community. Bernstein focuses on ways to recover ideas of liberalism and social justice from within the Jewish tradition. He concludes by arguing that American Jews should abandon the long-standing alliance many have with the progressive left. Instead, he argues, they should work with those in the political centre and those sections of immigrant communities who cherish America’s liberal-democratic ideals.

This focus on the woke takeover of Jewish institutions is an interesting and worthwhile topic for a book. The book does not, however, constitute a direct attack on the ideology behind woke anti-Semitism.

Indeed, when it comes to woke ideas themselves, Bernstein is relatively conciliatory. In his view, the woke outlook is not inherently problematic. Nor is there anything wrong with the concept of ‘social justice’. What is needed, he says, is a more fluid conception of which group is advantaged or oppressed in a given system. In his view, one must recognise that the historical experience of oppression changes over time – meaning there is no inherent link between a given identity and oppression.

Here he lets identity politics off too lightly. He seems to confuse identity politics with the fact that some people identify with certain aspects of their heritage in their personal life. If individuals want to identify as Jewish, or black or members of some other group, that is up to them. But identity politics is based on the idea that society is inherently divided along racial lines. It is this view that needs to be countered.

Rather than treating people as individuals or as members of a nation, identity politics emphasises the narrow identity group to which each person belongs. And the social-justice worldview implies that any given identity group is always either oppressor or oppressed. In this way, identity politics reintroduces racial and gender distinctions as a basis for political conflict.

What’s more, woke identity politics views anyone who aspires to transcend such divisions – like the colourblind approach of Martin Luther King – with unremitting hostility. For instance, Ibram X Kendi, one of the most prominent advocates of so-called critical race theory, argues in his best-selling How to Be an Antiracist that: ‘The most threatening racist movement is not the alt-right’s unlikely drive for a white ethnostate but the regular American’s drive for a “race-neutral” one.’

This is an ugly worldview that rehabilitates old-fashioned racism in a new form. It emphasises the superficial aspects of our identity that divide us and downplays the common humanity that unites us. And it is viciously intolerant of anyone who dissents against its core tenets.

Moreover, the framework of critical race theory can lend itself to anti-Semitism. It is all too easy to cast Jews, who are predominantly white, as having ‘white privilege’. As Bernstein observes, the idea of ‘Jewish privilege’ has even emerged in some woke circles. This essentially creates a ‘permission structure’ for expressing hostility against Jews. Among the politically correct, using the old-style anti-Semitic language of the far right would be considered beyond the pale. But the woke jargon of ‘challenging privilege’ and ‘abolishing whiteness’ provides a more palatable way to recycle notions of conspiratorial Jewish power and influence.

Some, such as David Baddiel, have suggested that the way forward is to recognise Jews as black and minority ethnic (BAME) people. That is, to slot them into the identity-politics framework on the side of the victims. Whether this would be accepted politically by identitarians is itself highly questionable. But the very idea should also be anathema to anyone who upholds liberal values. Woke politics should be resisted by everyone – not just those currently disfavoured by its conception of oppressor / oppressed.

Bernstein, then, is too conciliatory: woke ideas are not simply progressive or leftist ideas that have gone awry. Wokeness is a retrograde form of politics that is rehabilitating old prejudices and divisions. Unfortunately, despite the brave voices resisting the trend, woke politics is still ascendant. By its very nature, such an outlook can all too easily stray into anti-Semitism. Challenging this poisonous ideology is more urgent than ever.

Woke Anti-Semitism: How a Progressive Ideology Harms Jews, by David Bernstein, is published by Post Hill Press. Order it here.