Why eco-activists are so hostile to humanity

Just Stop Oil’s contempt for the masses should come as no surprise. 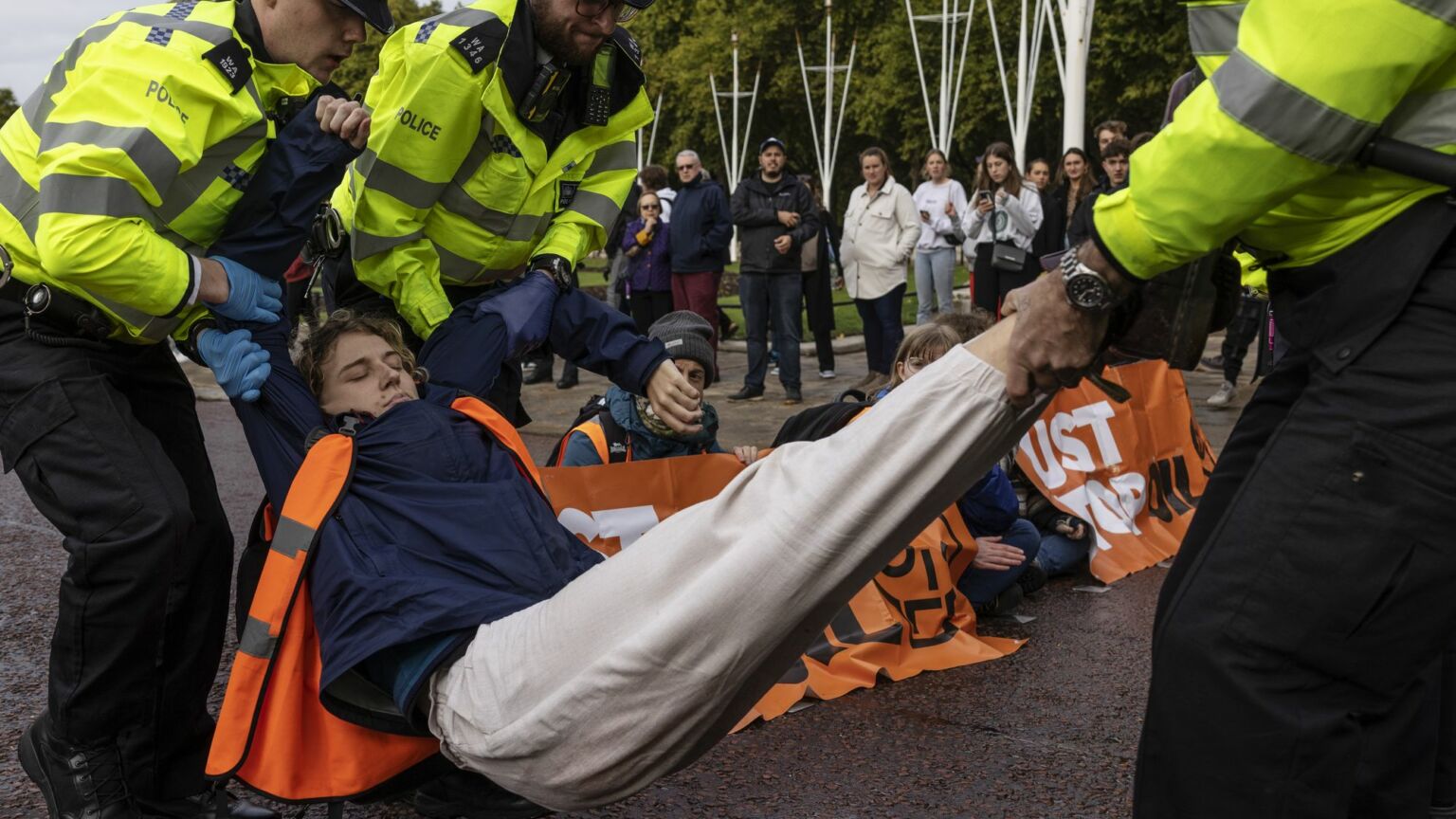 Something like class war has broken out on the streets of London. On one side stand working people fighting for their right to do their jobs, to attend to their daily business without hindrance. And on the other side there’s the green movement’s plummy predictors of eco-catastrophe. Those Tarquins and Matildas, often privately educated, who think the Industrial Revolution was the worst thing that ever happened and that we’ll all shortly be consumed by a climate apocalypse of the grubby masses’ own making. Once again the working classes are standing up to these silver-spoon prophets of doom, and I am here for it.

Just Stop Oil, an offshoot of the lunatic group Extinction Rebellion, is blocking roads around London. It is demanding that the government cease all production of fossil-fuel energy. Yes, in the midst of an energy crisis, with many folk unsure if they’ll be able to keep the heat on over the winter, these upper-middle-class activists are essentially saying: ‘Let’s produce less energy!’ ‘Let old people freeze to death’ is all I’m hearing. Unsurprisingly, people with jobs and lives are not happy about all the road-blocking. Today some of them took direct action. ‘I ain’t fucking about’, said one driver to the anti-oil agitators.

Some seized the protesters’ banners. Others dragged protesters off the road. As one angry bloke yanked one of the am-dram doomsters off the highway a woman said: ‘Oh my God, you’re hurting him, stop it.’ To which the man replied: ‘Get off the fucking road then.’ I want that on a t-shirt. I encountered a Just Stop Oil roadblock on Shaftesbury Avenue on Sunday. Again it was a battle of the classes. Young working-class men in building gear pleaded with the eco-hysterics to let them go home. The protesters, in the pained, paternalistic tones of a headmistress reprimanding a wayward schoolboy, told the men that they were carrying out this protest for their good and for the good of the planet. ‘You fucking muppets’, one of the men said.

Just Stop Oil isn’t only inconveniencing working people, people who are economically and socially productive. They’re also harming the ill and vulnerable. Today they blocked both a fire engine and an ambulance. In one extraordinary clip a man can be heard saying to the protesters: ‘Somebody’s sick, get off the road! Somebody’s unwell, are you guys silly?’ With extreme callousness, a protester replies: ‘If somebody’s sick, they shouldn’t be driving.’ Patiently, their agonised accoster states the obvious: ‘No, they’ve got a passenger who is sick. Are you silly?’ Imagine the level of self-righteousness, and general inhumanity, a person must have reached to block the path of the ill, and then mock the citizen who asks him to take pity on the ill and let them pass through.

In another video, a man says: ‘I have to go to hospital for an appointment, I’m deaf, let me get on with my life and stop interfering with us.’ He later appeals to the crowd – some people clearly still understand the importance of social solidarity – and says: ‘Where’s the police? What are we paying our taxes for? To have our lives inconvenienced by these idiots? This is wrong.’ It was an impromptu speech that cut to the heart of why people are so angry about all this. They feel their lives are being disrupted by the neurotic well-off, and that the authorities are not doing enough to sort it out. On Sunday a copper pushed me off the road – as I was patiently explaining to the protesters that they are a menace to the rights and livelihoods of working people – and left the protesters in place. (Many were subsequently arrested, of course, after a period of time.)

I, for one, feel a strong sense of pride over the revolt against Just Stop Oil. This is direct action. It echoes earlier people’s uprisings against Extinction Rebellion and Insulate Britain. Who can forget the cry of one of the men who dragged an Insulate Britain muppet off a road in October last year in order that an ambulance could pass through: ‘It’s a fucking ambulance, you stupid prick, get out of the road!’ Political language at its plainest and most universal. The elites – from cops to the political class to most of the media – might sympathise with these Ends of Days mobs, but most normal people certainly do not.

Here’s the important thing: these protesters’ inconveniencing of ordinary people is not an accidental byproduct of their apocalyptic agitation. Even the contempt they clearly feel – and sometimes express – for people who are just trying to get to work or attend a hospital appointment is not some spin-off of their key aim of ‘raising awareness’. No, the inconveniencing is the point. The barely concealed disdain for the throng is the main thing. The scorn they clearly feel for us competitors in the rat race driving around town and doing our silly jobs is central to their entire outlook. Environmentalism is fundamentally an anti-people movement, and that’s why Just Stop Oil – like XR more broadly – is so content to piss people off.

At root, environmentalism is an anti-modern, anti-masses ideology. It views humans as virtually a plague on the planet. We buy too much, drive too much, waste too much. Everything we do is measured, not by how much joy or importance it has in our lives, but by the ‘carbon footprint’ it leaves behind. Having kids, going on holiday, driving to work – our every endeavour is viewed as a carnival of pollution. And when you view people as a pox, as the authors of apocalypse, you’ll end up feeling very little indeed for their lives and their aspirations. That’s why Just Stop Oil is okay with stopping you from getting to work and even from getting to a hospital – because according to the misanthropic green gospel, all these behaviours are polluting, and thus bad, and thus they must be curtailed. When you see the human race as a problem, you’ll soon start to hate human beings.