Why I, a lifelong Democrat, would vote for the Florida governor in a heartbeat. 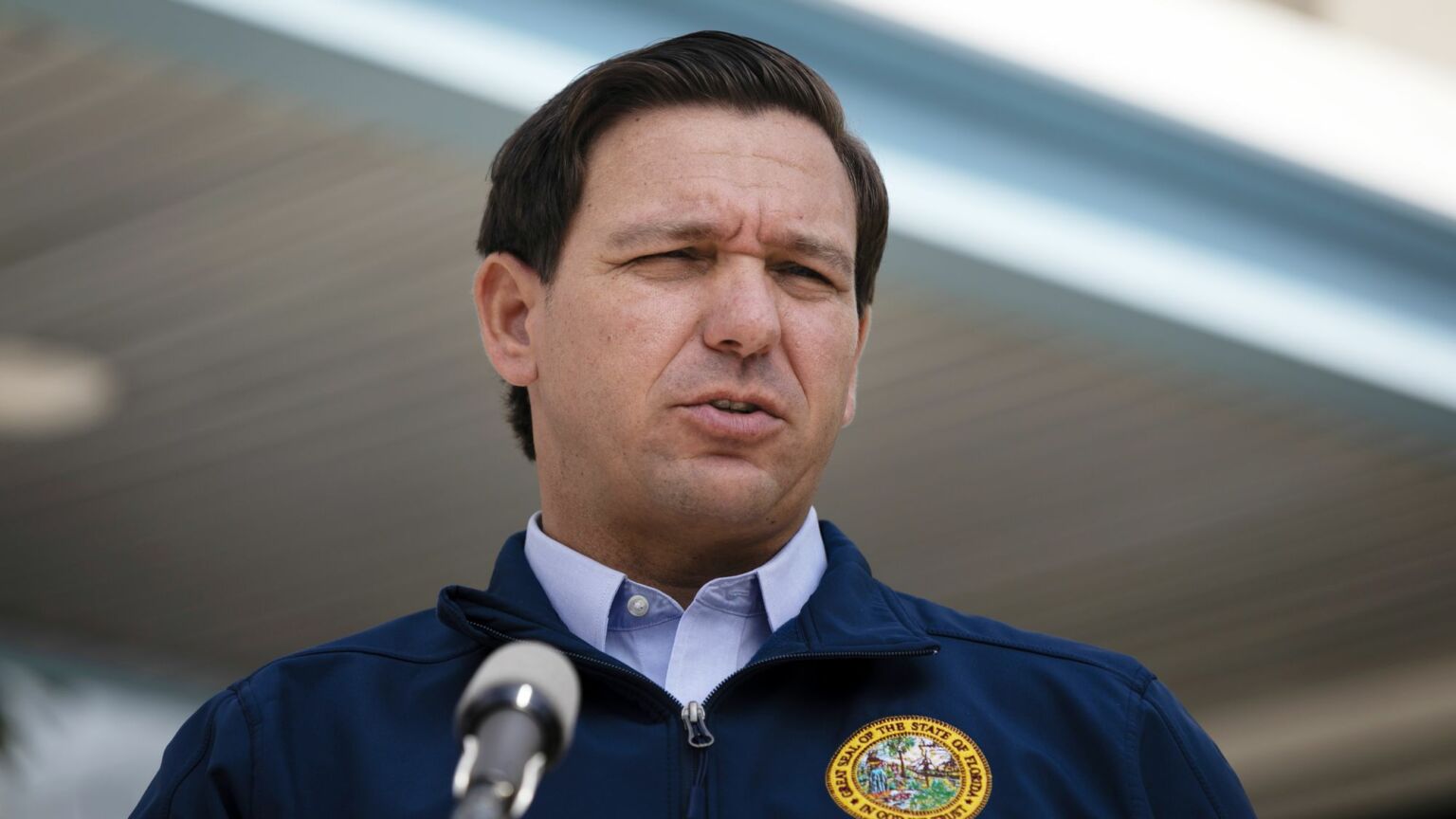 The commentator David Brooks asserts that once the FBI raided Donald Trump’s pleasure palace in August, and rallied the faithful to his persecuted side, your fledgling campaign for the Republican presidential nomination in 2024 was basically over. Formerly America’s Most Loveable Conservative and now a Biden Democrat in sheep’s clothing, Brooks may or may not enjoy the insider access to your people that he claims, so I’m going straight to the source. Please assure me that you’re not hanging up your hat, but reserving it to toss in the ring.

Allow me to introduce myself. I am a disaffected registered Democrat. I voted for Joe Biden on the assumption that he was a boring, moderate placeholder who could steady the national ship after the nauseous high seas of the Trump presidency. Two years on, I’m still sick to my stomach. Biden is captive to a radical left that has made the party I joined at 18 unrecognisable. It is now intolerant, racially obsessed, fiscally incontinent, eager to encourage dependency on the state and politically high-handed. But I cannot stick putting 2016’s crude, anti-democratic boor back in the White House. So the prospect of facing down a none-of-the-above contest in 2024 – a Trump vs Biden redo, much less Trump vs that idiot Kamala Harris – makes me suicidal. I’ve never voted Republican in my life. But if you were to secure the nomination (admittedly dependent on whom you ran against), I could be tempted to defect for the first time in nearly 50 years.

They say you’re insufficiently ‘charismatic’. But have you seen the Democratic competition? C’mon man, what passes for eloquence from our current occupant of the White House-cum-care home is making the same lame statement, word for word, three times in a row (for instance, on Putin’s threatened use of nuclear weapons: ‘Don’t. Don’t. Don’t.’). Could this guy conceivably pass for charismatic? Is Kamala charismatic? Apoplectic loathing for the vice-president is about the only thing that unites the whole country right now. Is meek softy Mayor Pete charismatic? Or Gavin Newsom, the slick, vain huckster who has turned the Golden State into the world’s largest open-air pit latrine? Granted, the 2016 primary candidate, Amy Klobuchar, while hardly magnetic, is at least likeable. Yet she rarely appears in journalists’ speculative lists of credible alternatives to Biden. Moreover, I reject the characterisation of Trump as charismatic. People flock to him because he’s an arrogant bully, not because he’s so charming. Sure, Ron, you’re a bit stodgy, and not the most rousing speaker in the world, but in comparison with the rest of this lot, you’re Abraham Lincoln. Jesus, while we wish her the best, the UK’s new PM won the Tory leadership contest with the charisma of a cardboard box.

Oh, and they also say you’re an autocrat. I see little evidence of that. Yes, you withdrew absurdly generous tax breaks from Disney, after the company campaigned against your Parental Rights in Education Act. When a once-neutral corporate entity that kept children entertained with Tinker Bell morphs into an activist organisation, advocating that these same children are taught ‘some boys have vulvas’, it has joined the rough-and-tumble fray and risks the loss of special favours that it shouldn’t have enjoyed in the first place. Was there an element of vengeance here? Sure. That’s politics. But what’s really autocratic is Biden’s unlegislated $1 trillion giveaway in student-loan forgiveness, which violated the separation of powers. Biden’s blood-red, Nurembergian declaration of war against half the country in Philadelphia earlier this month was autocratic theatre.

I was first impressed with you early in the pandemic. You did your homework. Rather than blindly accept politicised CDC propaganda, you consulted medical experts with a variety of perspectives, the better to come to your own conclusions: that lockdowns, mask mandates, vaccine mandates, vaccine passports and school closures are illiberal, destructive and medically ineffective. Thereafter, you weathered frenzied nationwide accusations that you were a granny killer.

As a result, despite a large elderly population, Florida’s Covid deaths per million were about the same as deaths in New York, which did such damage to the economy by pressing a giant pillow over the state for two years that its residents, many of whom had joined the ‘granny killer’ chorus, have been flocking to your jurisdiction ever since. Your educational achievement stats and employment figures are still high, while in 2021 Florida enjoyed the biggest influx of tourism in its history – since who wants to holiday where everyone is made to strap a sanitary napkin to their faces? To my mind, the pandemic was the best test of Western politicians’ mettle ever administered. You passed with flying colours. Most blue-state politicians failed.

True, I fiercely disagree with you about abortion access. Yet on many other issues, we’re surprisingly in sync. You saw no reason to change Florida’s voting laws during Covid, while drastic, ad hoc, last-minute revisions to electoral procedures in other states later helped justify Republicans’ disastrous rejection of the 2020 presidential results. You have banned the teaching of racist, divisive, historically distorted critical race theory in schools. Although the legislation was slyly mischaracterised by Democrats as the ‘Don’t Say Gay’ law, I don’t think kids under the age of nine should be forced to decide whether they’re boys or girls, either. You have protected women’s sports, which aren’t women’s sports with men in them. You have maintained high-quality public services with no state income tax and half the budget of profligate New York. You’re standing up to Big Tech’s stifling of free speech on the internet.

I’m an immigrant myself, so like most Americans I support controlled, legal immigration in moderate quantity. Uncontrolled, illegal immigration in eye-popping quantity is another matter. So good for you, forbidding the establishment of self-righteous ‘sanctuary cities’, which refuse to enforce federal immigration laws as belligerently as the Biden administration does. I thought your financing of the delivery of two planeloads of migrants to Martha’s Vineyard was hilarious. Yup, it was a stunt. An inspired one.

Three-quarters of Democratic voters don’t want Biden to run again. But the Dems don’t have anyone else lined up, and they’re starting to panic. They’re praying for Trump to win the GOP nomination, because he’s the Evil Incarnate they think they can beat (a huge gamble; maybe they can’t). From the perspective of the present, a 2024 Republican nominee with none of the bombast, bile and bedlam of Trump who espouses solid, sensible conservative values – once much the same values my own party embraced – could waltz into the Oval Office with millions of votes to spare. The Democrats are terrified of you, which is why Newsom is already firing salvoes at you personally, all the way from the Pacific. So I’m begging you. Don’t be fatalistic or defeatist. This is such a weird period of our history that just about anything could happen in the next two years. I can’t count the Americans I have met who say they would vote for you in a heartbeat. Keep your hand in the game.

Good luck prevailing in November’s gubernatorial, though I doubt you’ll need it.

Lionel Shriver’s collection, Abominations: Selected Essays From a Career of Courting Self-Destruction, is published by the Borough Press this month.