Sweden and the revolt against the evasive elites

Across the Western world people are rising up against their dishonest rulers. 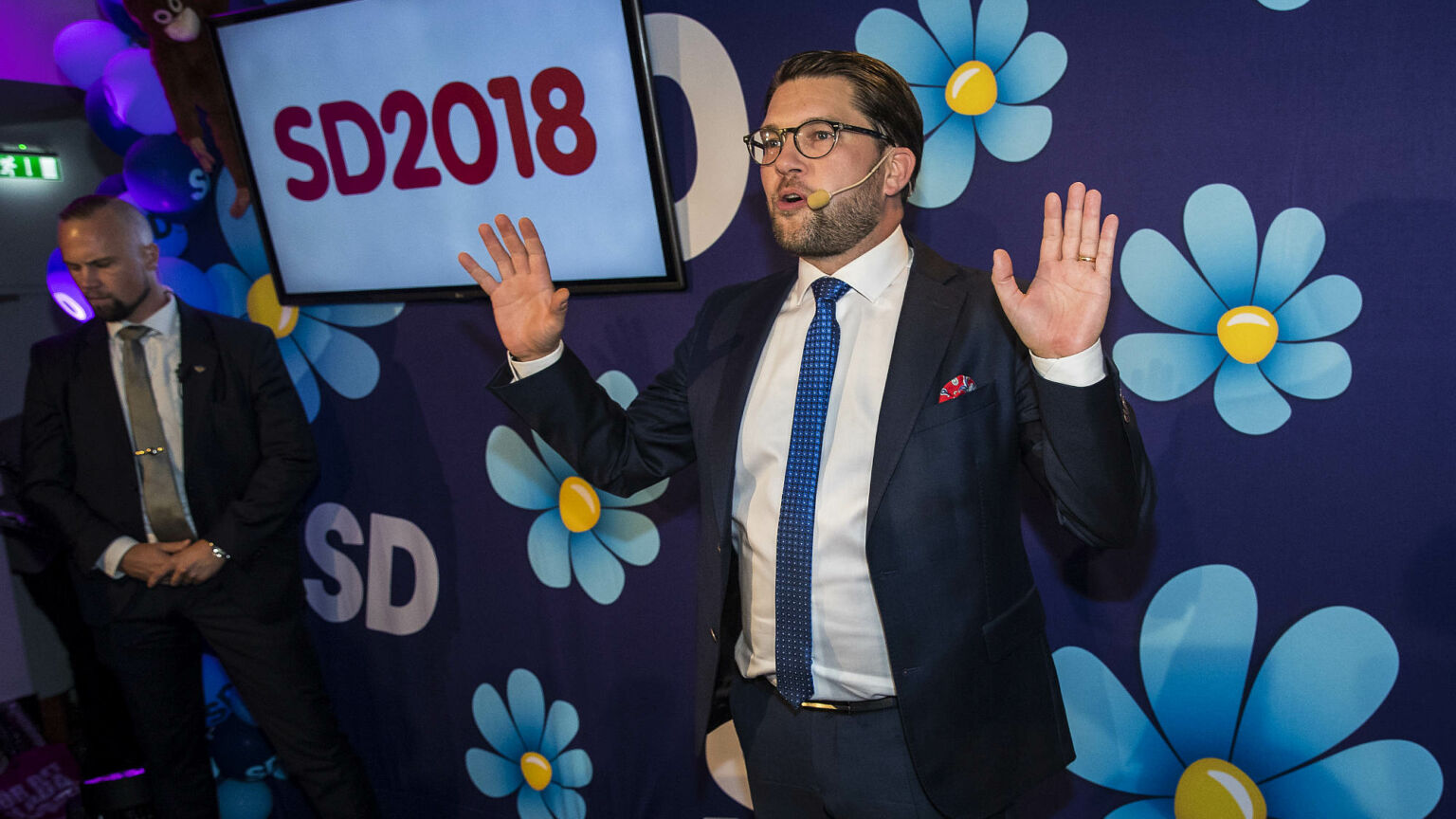 So now we know: nowhere is immune to the populist surge. Not even Sweden. Not even every European liberals’ favourite welfarist state. Once considered the happy country of Europe, an oasis of technocratic calm in an often unpredictable continent, now even Sweden has been rattled by populism. In last week’s election the Sweden Democrats, a right-wing nationalist party, emerged as the second largest party in parliament. And this has shaken not only the political class in Stockholm but liberal elites around the world. It’s a ‘dramatic shift’, says the New York Times. ‘Astonishing’, says Deutsche Welle. An ‘earthquake’, insist leftist observers. They sound like the troops of an embattled army watching their last patch of territory be conquered by the enemy.

The feeling that Sweden has fallen – and that its falling represents a blow to correct-thinking people everywhere – is palpable. We all looked upon Sweden as the ‘bedrock of Nordic liberalism’, say two writers for the NYT. And that makes its ‘move toward the more populist right’ seem especially ‘shocking’. It’s one thing for eccentric Britain to succumb to the populist bug, with our vote for Brexit, and for the crazy United States to take a temporary punt on Trump. But Sweden? That social-democratic paradise Guardian columnists dream of retiring to? Many will be asking ‘How did this happen?’, says a startled-sounding Deutsche Welle. How on earth, in this Northern European ‘bastion of tolerance’, did a ‘nationalist party’ find itself surging in the polls?

The alarm of the elites is striking. And telling. They seem to be clocking, finally, that their cultural and political values are not safe anywhere. Not even in Sweden. The election results were indeed remarkable. The Sweden Democrats, a party notable for its anti-immigration and anti-Islam stances, stormed into second place. They won 20.5 per cent of the vote. Not bad for a party that only made its debut in the Riksdag – the Swedish parliament – in 2010, when it won six per cent of the vote. That rose to 13 per cent in the 2014 election and 18 per cent in the 2018 election. Now, in terms of seats in parliament, the Sweden Democrats are second only to the Social Democrats, the party that has governed Sweden for most of the past century. Imagine the EDL nipping at the heels of a Labour government in the UK.

The Sweden Democrats were part of a right-wing bloc that won the election, if narrowly. The Social Democrat prime minister, Magdalena Andersson, conceded defeat and resigned. Ulf Kristersson of the centre-right Moderate party (which won 19.1 per cent of the vote) is now the prime minister in waiting and must stitch together a government. Whether that government will include the Sweden Democrats, or whether they’ll just agitate from the backbenches, remains to be seen. For years there has been a pact in the Swedish establishment never to engage with the Sweden Democrats. That is how significant the election result is. That is why it feels like an ‘earthquake’. Because a party that was treated as a political untouchable, as so vile that a cordon sanitaire had to be put around it, is now the second-largest in parliament, with a remarkable 73 seats. No wonder the managerial elites everywhere from New York to Berlin to Stockholm are reeling.

The Sweden Democrats do indeed have disturbing origins. They have their roots in neo-Nazi movements of the 1980s, rallying under the slogan Keep Sweden Swedish. But they’ve changed a great deal. Under the leadership of Jimmie Akesson, just 26 years old when he took over the party in 2005, the Sweden Democrats moved away from their ‘far-right roots’ and took a ‘more populist direction’. And they made huge inroads with certain sections of the electorate. Not the middle classes in Stockholm, of course – strikingly, they had a poor showing in the capital – but rather among what one journalist rather sniffily refers to as ‘undereducated people’ who think the ‘Social Democrats are not representing their interests anymore’. Class and education are strong predictors of who’s likely to vote for the Sweden Democrats. As a Swedish social scientist points out, ‘Voters with university degrees are strongly unrepresented among [Sweden Democrats] voters’. A poll in 2022 found that sympathy for the Sweden Democrats was far higher among blue-collar workers than white-collar workers. So 24.5 per cent of unskilled blue-collar workers expressed a preference for the party, compared with just 8.3 per cent of high-level white-collar workers.

This echoes the populist moment elsewhere in Europe, and in the US too, where education is very often a key dividing line in electoral behaviour. People who have never darkened the door of a university – and who therefore have not been so exposed to the values and etiquette of the new elites – seem far more content to turn their backs on the increasingly woke establishment and to take a chance on populist upstarts. That many blue-collar folk in Sweden are finally doing this is not surprising. It isn’t because they’re racist. They’re not drawn to the Sweden Democrats because it has some neo-Nazi cranks in its past. Rather, they are revolting against their evasive elites. Against an establishment that seems to be in wilful denial about the problems confronting society, and which will brand you a hateful bigot if you dare to raise those problems.

The political life of Sweden has been defined by evasion in recent years. The establishment parties, especially the Social Democrats, flat-out refused to be honest about the social disturbances afflicting Swedish society. Crime and violence have soared. There are now so many grenade attacks in Sweden that it is the only country other than Mexico in which police record the number of such attacks. Explosions generally are rising. As a BBC report in 2019 asked: ‘Sweden’s 100 explosions this year: What’s going on?’ In 2020 alone there were more than 200 explosions and 360 shootings. Sweden is the only country in Europe in which gun murders have surged since the year 2000. Then there are the religious riots. Earlier this year there were Islamist uprisings across Sweden. In various cities, Muslim mobs set fire to cars and hurled stones at cops following a right-wing provocateur’s burning of the Koran. Sweden’s national police chief said he had ‘never seen such violent riots’.

That much of this spike in crime and rioting followed Sweden’s huge intake of asylum seekers in 2015 has made this a tetchy, touchy subject. Swedish politicians and commentators, keen to dampen down what they consider to be the racist tendencies of the Swedish masses, tended to downplay the social instability. Outside observers did likewise. Remember the trouble Trump got into when he said Sweden was experiencing some big social and cultural problems? Don’t be ridiculous, the chattering classes of the West said – Sweden is fine. But it wasn’t fine. And its problems were at least partly a consequence of a crisis of integration, of the failure on Sweden’s part to assimilate the tens of thousands of largely Middle Eastern migrants it accepted in 2015. Consider this: four esteemed social scientists in Sweden examined the rape trends of the past two decades. They found that of those convicted of rape, 40.8 per cent were Swedish-born with Swedish parents, and 47.7 per cent were born outside of Sweden. Most of those were from the Middle East or North Africa. That is something to discuss, right?

Apparently not. Too often, debate was shushed, demonised. The end result was as predictable as it was dire: social instability intensified as the elites looked the other way. Eventually things got so bad that the PM, Magdalena Andersson, said Sweden had to talk about it. We can no longer ignore the fact, she said earlier this year, that we have ‘parallel societies in Sweden’, that ‘integration has been too poor at the same time as we have had large [amounts of] immigration’. But it was too little, too late. Many voters had already turned their backs on Ms Andersson’s Social Democrat party and moved towards the Sweden Democrats, for the simple reason that they wanted someone – anyone – to talk about Sweden’s transformation from a relatively stable welfare-oriented society into a nation beset by gang violence and identitarian grievance. It was the evasions of the elite, their stricture against open, honest commentary, that encouraged many to look to the Sweden Democrats.

Evasiveness is the bad habit of the 21st-century technocracy. The establishment is constantly looking the other way. For years it’s been avoiding the truth about everything from simmering cultural tensions to the likely impact of deprioritising energy production and embracing mad green policies. Only when these colossal follies come to a head – such as in the Islamist uprisings in Sweden or in the energy crisis now sweeping Europe – do they say: ‘Ah, there’s a problem. Shall we talk about it?’ Populism is an attempt by ordinary people to force real issues, real problems and reality itself back on to the political agenda. That’s what the voters of Sweden have done – told their ruling class that its strategy of evasion will be tolerated no longer, and it is now time for some truth.