Why aren’t we talking about the Islamist uprising in Sweden?

Freedom of speech must include the freedom to ridicule Islam. 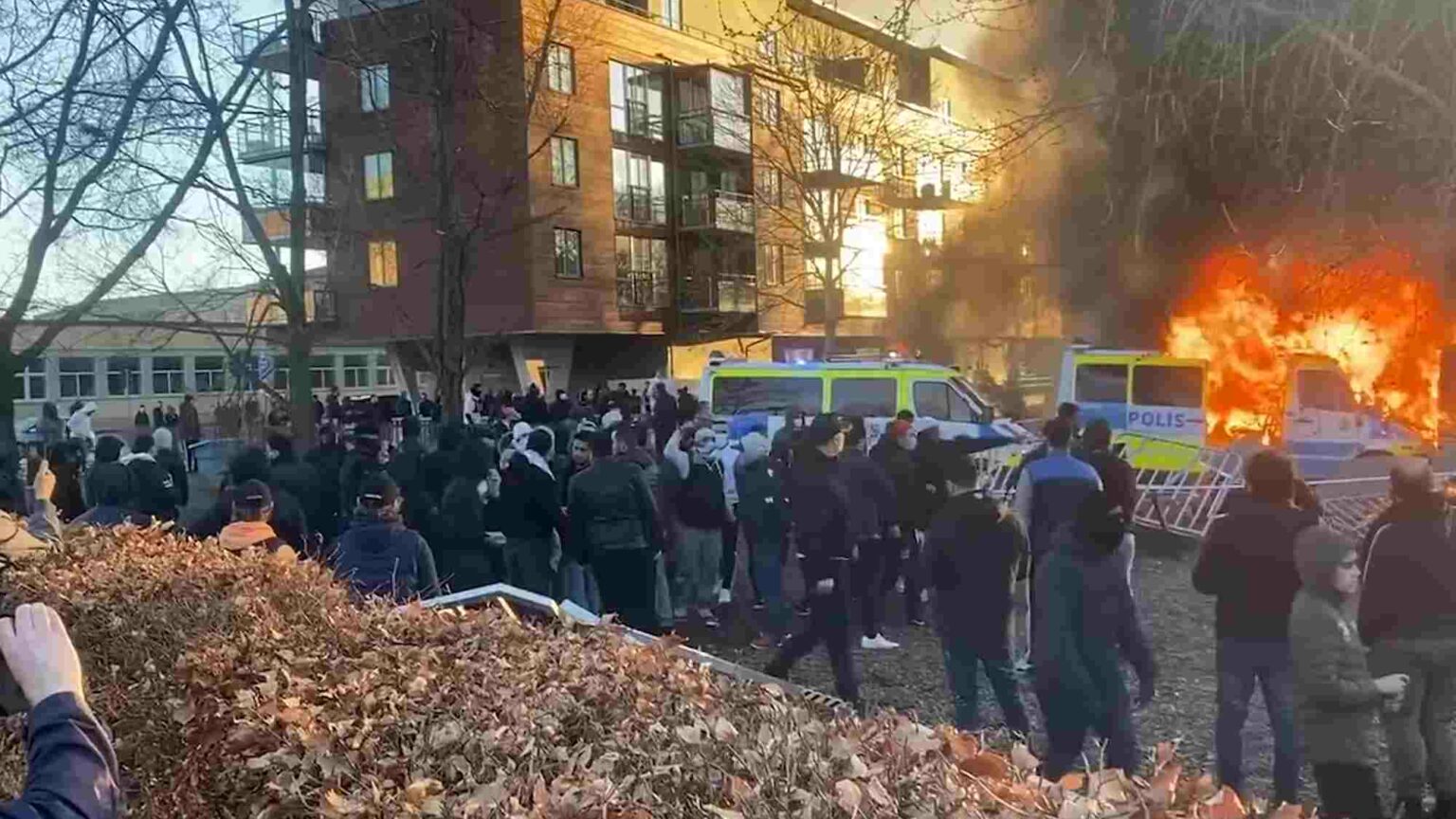 Right now, in Europe, mobs of people are rioting. They’re hurling rocks and stones at police officers and setting fire to cars. Several cities have been shaken to their core by this riotous fury. A police chief says they are the most violent street disturbances he has ever known. Worse, this is an entirely regressive riot. It is not an angry uprising for democracy or liberty, but its polar opposite – it’s a screech of religious rage against the expression of certain ‘blasphemous’ ideas; it’s a fiery effort to suppress ‘offensive’ speech. Some of the worst riots in a country’s living memory, all to the end of defending archaic religious beliefs from challenge or criticism… why aren’t we talking about this?

This is happening in Sweden. It’s been happening for four days now. On Friday there were riots in the city of Orebro. The violence spread to the city of Norrkoping, which is around a hundred miles south-west of Stockholm, and to Linkoping. Then there was street violence in an actual Stockholm suburb: Rinkeby. On Saturday violence rocked the southern city of Malmo. In some cities the violence continued on Sunday and Monday. Scores of police officers have been injured and dozens of rioters arrested. According to the BBC, Sweden’s national police chief, Anders Thornberg, says he has ‘never seen such violent riots’. He says the rioters ‘tried to kill police officers’.

The spark for all this? Blasphemy. Specifically, blasphemy carried out by a far-right Danish-Swedish politician by the name of Rasmus Paludan. Mr Paludan leads an anti-immigration, anti-Islam outfit called Stram Kurs (Hard Line). He has a penchant for burning copies of the Koran. And he’s been doing it in Sweden in recent days, travelling from city to city to take part in anti-Islam rallies that involve desecrating copies of Islam’s holy book. The rioting has tended to follow this weird Koran-burning tour by an undoubtedly bigoted politician. For example, Paludan burnt a Koran in Malmo on Saturday and violence erupted soon after. There was vast destruction, including the burning of a school. You burn our holy book, we burn your schools – is that it?

Even where there has been mainstream media coverage of the riots – apparently some of the worst riots Sweden has ever witnessed, remember – it has tended to obscure rather than enlighten. Euphemism abounds. The BBC refers to it as ‘unrest’. It labels the rioters as ‘counter-demonstrators’, imbuing them, whether intentionally or not, with a political legitimacy they surely do not deserve. Much of the coverage gives the impression that the true cause of the violence is Mr Paludan, which is incredibly infantilising of the rioters. Mr Paludan may well hold repugnant beliefs, but he has not thrown missiles at the police or set fire to cars or smashed shop and school windows. That has been done by the people who take umbrage at his speech, who feel alarmed by his blather. These people – mostly Muslims – are not children, however much the paternalism and pity that motor identity politics might try to convince us otherwise. No, they made a decision to use physical force in response to speech. They are not ‘counter-demonstrators’; they’re rioters, and they are using fire and fury to try to force out of the public sphere speech they find offensive.

To be clear, Mr Paludan’s public expressions are offensive. He wants to outlaw Islam in Denmark. That’s an idea I find deeply offensive, given it would represent a grotesque assault on freedom of religion and freedom of conscience. He wants to deport all Muslims from Denmark, which is flat-out racist. And I understand why Muslims feel rattled by his ridiculing of the Koran. At various rallies in recent years, he has thrown it in the air, stomped it into the ground, burnt it. Is this necessary? Can one not criticise Islam without making a big show of destroying its texts and symbols? I have criticisms of the Catholic faith I was raised in, but I’m not about to go into a public square and behead a statuette of the Blessed Virgin.

And yet there is a point of principle that soars above all of this. Above Mr Paludan’s vulgarity and the question of whether he should say the things he says; above the fact that some people view the Koran, as the BBC sympathetically says in its report on the Swedish riots, as ‘the sacred word of God’, and thus consider ‘any intentional damage or show of disrespect towards it’ as ‘deeply offensive’; above, fundamentally, people’s feelings and sensitivities. And that is freedom of speech. The right of every individual to say what he believes to be true, even if it upsets, outrages, disturbs. Let’s lay it on the line: Mr Paludan’s right to desecrate the Koran must take precedence, legally and morally, over a Swedish Muslim’s right never to feel offended. This is the enlightened way. This is the path of liberty.

To their credit, the Swedish police seem to have some understanding of this point of principle. Can you imagine a British police force giving permission to a far-right rally with a public burning of the Koran? Swedish police chiefs have said that all people in Sweden must be free to ‘use their constitutionally protected rights’ both ‘to express their opinion’ and ‘to demonstrate’. This is exactly right: Mr Paludan and his weird minions must have the right to express their opinion that Islam is evil and those who feel offended must have the right to protest against them. And yes, burning objects counts as an expression of opinion. For decades, American warriors for freedom of speech have insisted on the right of people to burn the Stars and Stripes because, in the words of Nadine Strossen, even ‘deeply unpopular [and] offensive’ speech should be free speech. So Paludan should have the right to burn the Koran, and others should have the right to say ‘Don’t do this, please’. But rioting? That’s something else entirely.

Sweden’s days of rioting are not ‘counter-demonstrations’. They are not ‘speech’. No, this is violence, and it is violence deployed to the end of shushing blasphemous commentary. This is an unstable, incoherent species of Inquisition, in which a menacing message is being sent: offend my religious sensibilities, offend me, and we will visit destruction upon you. No nation that believes in liberty should cave in to such threats. It would give religious fundamentalists a veto over what may and may not be said in public, over freedom itself. Whether it’s schoolteachers being hounded into hiding in the UK or cartoonists being murdered in France or far-right politicians being rioted against in Sweden, we are witnessing a rise in violent Islamist intolerance. Our response should be to defend freedom of speech to the hilt, for everyone and against everything – including Islam.

The true problem here is an unwillingness among the European intelligentsia and political class to stand up for freedom and to make it clear to all social groups that their feelings carry less moral weight than the principles of freedom. In fact, too often the elites do the opposite – they send the message that some forms of speech are so hurtful, so ‘erasing’, that they may be legitimately sidelined or squashed, whether it’s ‘transphobic’ feminism, un-PC humour or mockery of Muhammad. This gives a green light to violent fury against allegedly ‘violent’ speech. Those riots in Sweden can be seen as a physical manifestation of woke sensibilities, of the regressive belief that certain people’s self-esteem should trump other people’s liberty to utter their ideas – a belief held as firmly by the cultural elites as by regressive religionists.

Public discussion about Sweden is too often suppressed. Remember the trouble Donald Trump got into when he said Sweden was experiencing certain social problems? And yet he was right. A culture of instability is palpable in Sweden. Particular crimes rose following the influx of large numbers of migrants in 2015. There is an unprecedented number of gun and grenade attacks. And now there has been nearly a week of rioting because someone made fun of a religious book. The problem here isn’t Muslims – the vast majority of Muslims in Sweden are not rioting. No, it’s the reluctance of European societies to be honest about the problems they face and to make it clear that certain values are non-negotiable, however you might feel about them. Prime among those values is freedom of speech. Sweden should be congratulated for permitting the expression of offensive ideas, and for quelling the riotous response to those ideas. Violence is never an acceptable response to speech.