So now you care about free speech?

The outrageous arrests of those republican protesters have flushed out all the hypocrites. 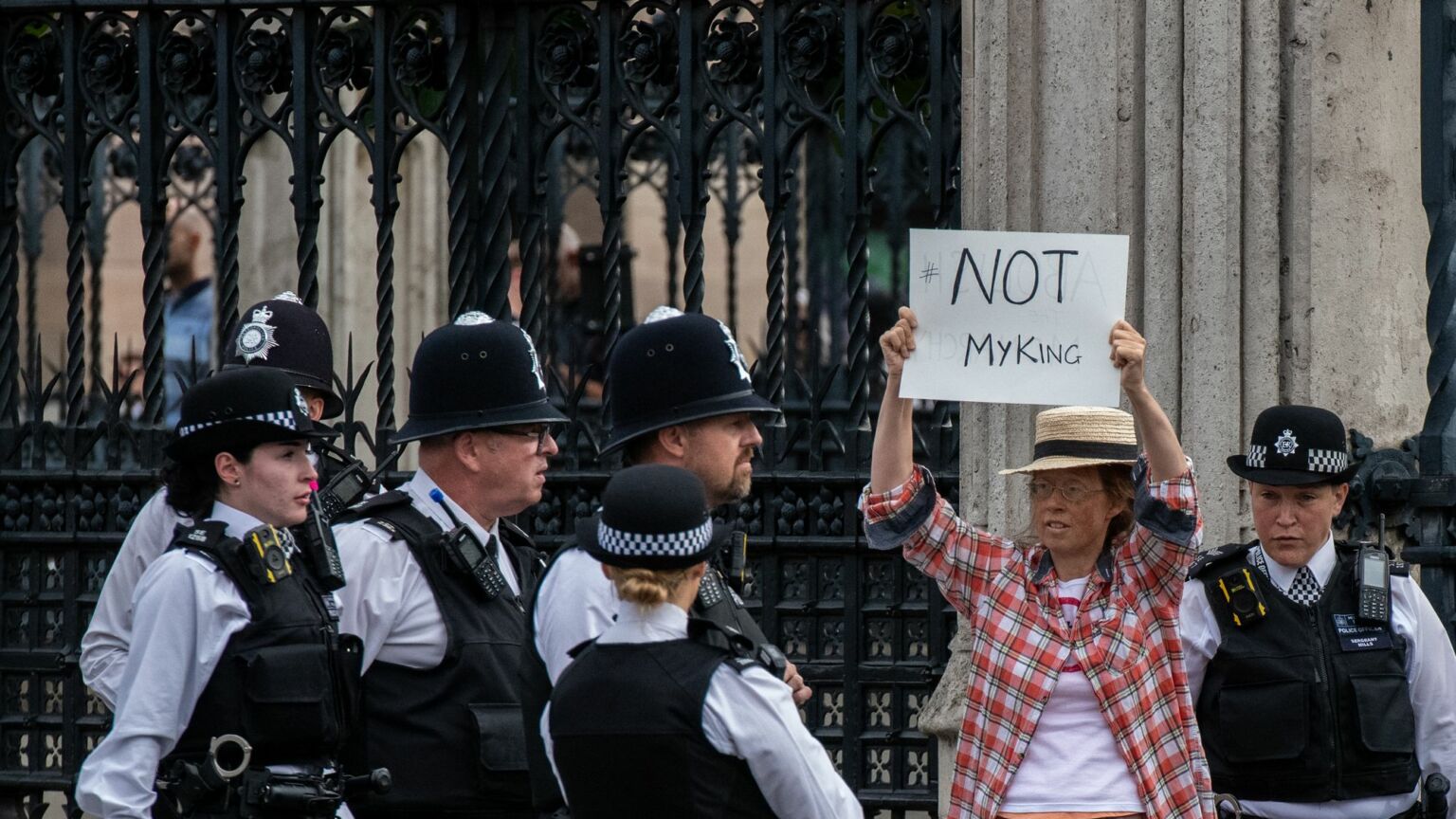 Somebody pinch me. The left is up in arms about censorship. The outrageous arrests and police harassment of republican protesters and hecklers in recent days seem to have converted that most censorious section of British public life to the cause of our most treasured liberty – the freedom to speak one’s mind as one sees fit without the threat of arrest, punishment or cancellation.

‘So only monarchists are allowed to express an opinion on our streets?’, thundered the Mirror’s Kevin Maguire, in response to the news that a woman in Edinburgh has been arrested and charged for a ‘breach of the peace’ for holding up a sign proclaiming, ‘FUCK IMPERIALISM – ABOLISH MONARCHY’. Owen Jones, Ash Sarkar and the rest of the pundit left have also been tweeting their anger about this unhinged act of state censorship and others like it.

The official mourning of the queen’s death has indeed exposed the censor-happy nature of the British constabulary. Alongside that woman in Edinburgh, there is the 22-year-old man, also in Edinburgh, who has been charged with ‘breaching the peace’ for heckling Prince Andrew. A man in Oxford was arrested, and then ‘de-arrested’, the other day for shouting ‘Who elected him?’ during an accession proclamation for King Charles III. In Westminster, a police officer threatened to arrest a barrister for holding up a blank piece of paper, on which he planned to write ‘Not my king’.

All this has come as no surprise to those of us who have been raging against the rise of Britain’s literal thoughtpolice for years. According to The Times, 3,300 people were detained and questioned in 2016 alone for offensive online speech. Going by the constant stream of cases in the news since, that year wasn’t a blip. In July, a veteran was arrested at his home for posting a meme that had ‘caused anxiety’ – an echo of the cop who told that barrister his as-yet-unwritten sign ‘may offend people’.

Police have been going after offline statements in just as unhinged a fashion. Gender-critical feminists seem to have borne a fair bit of the brunt of this. In January, Gwent Police arrested a disabled women’s rights campaigner for an alleged hate crime after she put up posters bearing such unspeakable slogans as ‘humans never change sex’. She was detained for 12 hours and an academic book was seized from her home.

It seems that the woke left was blissfully unaware such things were going on until the shameful behaviour of police in recent days. Or maybe it took the shocking events over the weekend – this almost medieval clampdown on critics of the king – to bring the issue into stark relief; to convince them, once and for all, that a scandal they had long dismissed as a right-wing myth was very real. Welcome, comrades. Better late than never.

Of course, that’s not what’s happened. And if you get beyond the first sentence of each of their condemnations of the cops you quickly see what they’re really upset about: not speech being curtailed per se, but speech they agree with being curtailed. Which is not the same thing. The most they are managing here is a passionate defence of the freedom to agree with them in public.

Many of them aren’t even managing that, if we’re honest. They’re just accusing us ‘free-speech warriors’ of rank hypocrisy for staying silent about these arrests. Which would be a nice little dunk were it not for the fact that the condemnation of this censorship from those they slur as ‘free-speech warriors’ has been firm and swift. We’ve covered the arrests prominently on spiked. The Free Speech Union has offered support to the protesters. As has basically every other prominent free-speecher you could name.

Their other hot take is that these arrests actually vindicate the left – in showing that the ‘real’ threat to free speech comes from the government and its anti-protest Policing Act. Another nice dunk were it not for the fact that, contrary to earlier reports, none of these protesters were actually charged under the dreadful Policing Act, but rather under other laws the woke left seems not to be so fussed about. (For what it’s worth, spiked opposes those laws and the Policing Act.)

Indeed, leftists’ agitation against that particular piece of legislation, brought in earlier this year to curb Extinction Rebellion and the like, begs a question of them: why are you so chilled out about all the other pieces of legislation that curb speech? Their silence on basically every other arrest for thoughtcrime in recent years has indeed been deafening. And that’s without getting into the whole issue of cancel culture, a modern form of mob censorship the woke left has pioneered.

The chutzpah is almost impressive. Here they are accusing free-speechers of hypocrisy, despite ample evidence to the contrary. Meanwhile, they only ever defend speech they agree with. They act as if they have been vindicated, even though the arrest of those republicans actually vindicates what us ‘free-speech warriors’ have been saying to intolerant leftists for years. Namely, that if you carry on demanding censorship it will eventually catch up with you.

Even now, they’re too pigheaded to see it. Or perhaps, deep down, they know that when it comes to the state clamping down on dissenters today, toytown leftists like them are rarely the targets.