The ideology of lockdown is a menace to society

China’s ongoing brutal lockdowns are a reminder of the insanity of ‘Zero Covid’. 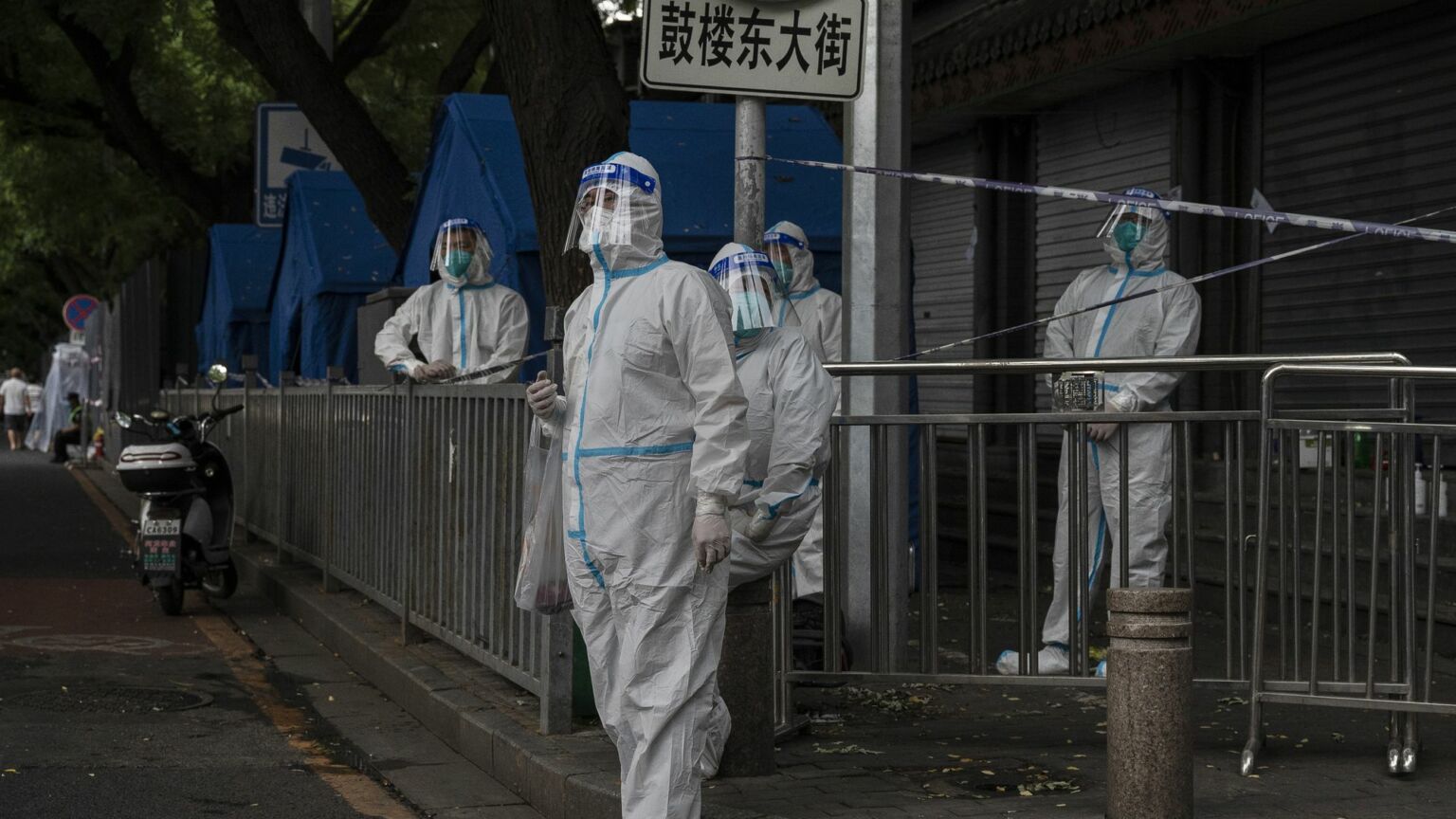 Remember Zero Covid? This was the idea that the only way to deal with Covid-19 was by eliminating it. Only when every trace of the virus had been scrubbed from society would it be safe to let the masses out again, insisted the Zero Covid fanatics. Zero Covid ideologues were everywhere. In the medical establishment, the political elite, the media. In early 2021 the Guardian’s leader writers were telling Boris Johnson that he should ‘[stamp] out the virus with a Zero Covid strategy’. Kill Covid to save society.

How is Zero Covid looking now? Ask China. The suffering of the Chinese people under the ideology of Zero Covid is extraordinary. Lockdown may be a mercifully fading memory for us in the West but it remains the ruthless daily reality for the Chinese. The numbers are staggering. Sixty-eight cities in China are currently in partial or full lockdown. As of last week this includes the megacity of Chengdu, where 21million people have been instructed to stay indoors. Only one person from each household is allowed out to do essential shopping. No exercise, no strolls in the park, no going to work. Briefly nipping out for food is the only civil liberty the people of Chengdu enjoy.

The Chengdu lockdown is truly dystopian. Not only have millions been placed under house arrest – others have been forced to take up residence at their places of work. Chengdu is an economic powerhouse, home to global players in the automaker and technology markets, including Volkswagen and Foxconn Technology Group. And to ensure that the lockdown doesn’t disrupt production too much, some factories are operating ‘closed loop systems’. This means ‘separating workers from the rest of the community’. The workers stay on site, in campuses, away from their fellow citizens and families, and are constantly tested for sickness. All so that they can carry on being a cog in China’s vast economic machine. Under Zero Covid you’re either a potential carrier of disease that must be sealed into your home or a machine to be separated from society so that you can carry on producing for profit. Zero Covid dehumanises all.

The announcement of the lockdown in Chengdu last week led to widespread panic buying. Social-media footage showed ‘desperate Chengdu residents’ grabbing as many essential supplies as they could. Such distressing images were not surprising considering that in other recent lockdowns people have run out of food. The people of Chengdu may be thinking of the city of Xi’an in north-west China, which was locked down in December and January. A few days into that lockdown, even the right of people to leave their homes to buy essentials was scrapped. Remarkably, 13million people were forbidden from going outside for any reason whatsoever, even to acquire the means of sustaining life. Instead, officialdom set up a food-delivery system. It didn’t go well. People took to social media to say they weren’t receiving enough to eat. One desperate man offered up his Nintendo console for some instant noodles and steamed buns. Another offered dishwashing liquid for apples. Xi’an was experiencing a ‘return to primitive society’, said one resident.

In between the Xi’an and Chengdu lockdowns came the Shanghai lockdown, possibly the most disturbing lockdown in China so far. It was in April and May. It lasted for two months. The restrictions on the lives of the city’s 25million residents were ‘ruthlessly enforced’. Again people ran out of food. Some became so desperate that they ate wild vegetables, falling ill as a result. It was ‘eerily reminiscent of the desperate times of the Great Leap Forward… when the bark was stripped from trees by starving people’, said one observer. Overnight, green metal fences were erected outside any apartment building in which a resident had tested positive for Covid – homes turned into impromptu prisons. Alarms were put on the doors of the infected, to alert the authorities if they ventured outside – a modern-day version of the black cross that was painted on the doors of the infected during the Great Plague of London in the 1660s.

Like something out of a dystopian B-movie, drones were sent out into the Shanghai sky with loudspeakers telling the locked-up masses below to ‘Control the soul’s desire for freedom!’. There were forced evacuations and forced family separations, too. Entire communities were relocated. The people of the Pingwang suburb were moved en masse to quarantine facilities a hundred miles away. The thousand residents of the town of Beicai were forced into temporary accommodation so that their town could be ‘disinfected’. Children who tested positive for Covid were removed from their parents. People going hungry, people fenced into their homes, sick kids spirited away from their parents – it is extraordinary that this was happening in the gleaming modern metropolis of Shanghai, just three months ago, as we in the West went about our post-lockdown lives as normal.

The harms of Zero Covid are becoming clearer and clearer. As the British Medical Journal pointed out, there were even ‘reports of people [in Shanghai] dying from non-Covid causes because they [could not] access their usual medicines’. The entire oath of medicine – First, Do No Harm – is turned upside down when society devotes itself so singularly and psychotically to tackling one virus alone. Spiritual health, social health, even physical health – all have been sacrificed in China’s crusade to achieve Zero Covid. Let’s be grateful Boris didn’t heed the Guardian’s plea to pursue a Zero Covid strategy. Actually, the horrors of Shanghai seem to have changed even the Guardian’s mind. ‘Fear, paranoia, anger – this is life under China’s Zero Covid strategy’, a headline said in April.

And yet even as we balk at the tyranny in China, now spreading, virus-like, to Chengdu, let us not imagine that we would never do anything like this. We already did. Our lockdowns were not as severe as China’s, but we did send drones to spy on dog-walkers during the first lockdown in March 2020. We did limit people’s right to leave their homes. We did clamp down on criticism of the Covid strategy on social media, just as China is now doing. The social-media giants of Silicon Valley gave Beijing a run for its money when it came to restricting ‘disinformation’ about Covid and lockdown. And yes, we harmed our citizens’ health by turning Covid into the only issue in town. Undetected cancers and mental-health problems are just two of the public-health crises that appear to have been exacerbated by lockdown.

Indeed, the West’s importing of Chinese-style authoritarianism was one of the most disturbing things in the Covid era. Who can forget Imperial’s Neil Ferguson saying that he and the other early supporters of lockdown never imagined they could ‘get away with’ what China had done around Wuhan – but ‘then Italy did it, and we realised we could’. In July 2020 Tory MP and one-time leader hopeful Jeremy Hunt seemed to praise China’s approach, and suggested that we should also have aimed for ‘zero infection and elimination of the disease’. Go and tell that to the heavily pregnant woman in Shanghai who posted a desperate message on social media saying she only had two days’ worth of food left.

Zero Covid has been an act of self-sabotage for China. It is now having a huge impact on China’s economy and political stability. It is all an apt and depressing reminder of what happens when the state elevates ideology over reason. When citizens are reduced to vectors of disease to be managed and controlled rather than being treated as wise, good individuals who should be trusted to behave responsibly. The nightmare in China is an indictment of the regime in Beijing, and also of some of the lockdown fanatics here in the West who might have happily led us down the same path to social destruction.