Poverty and underdevelopment are the real causes of this devastation. 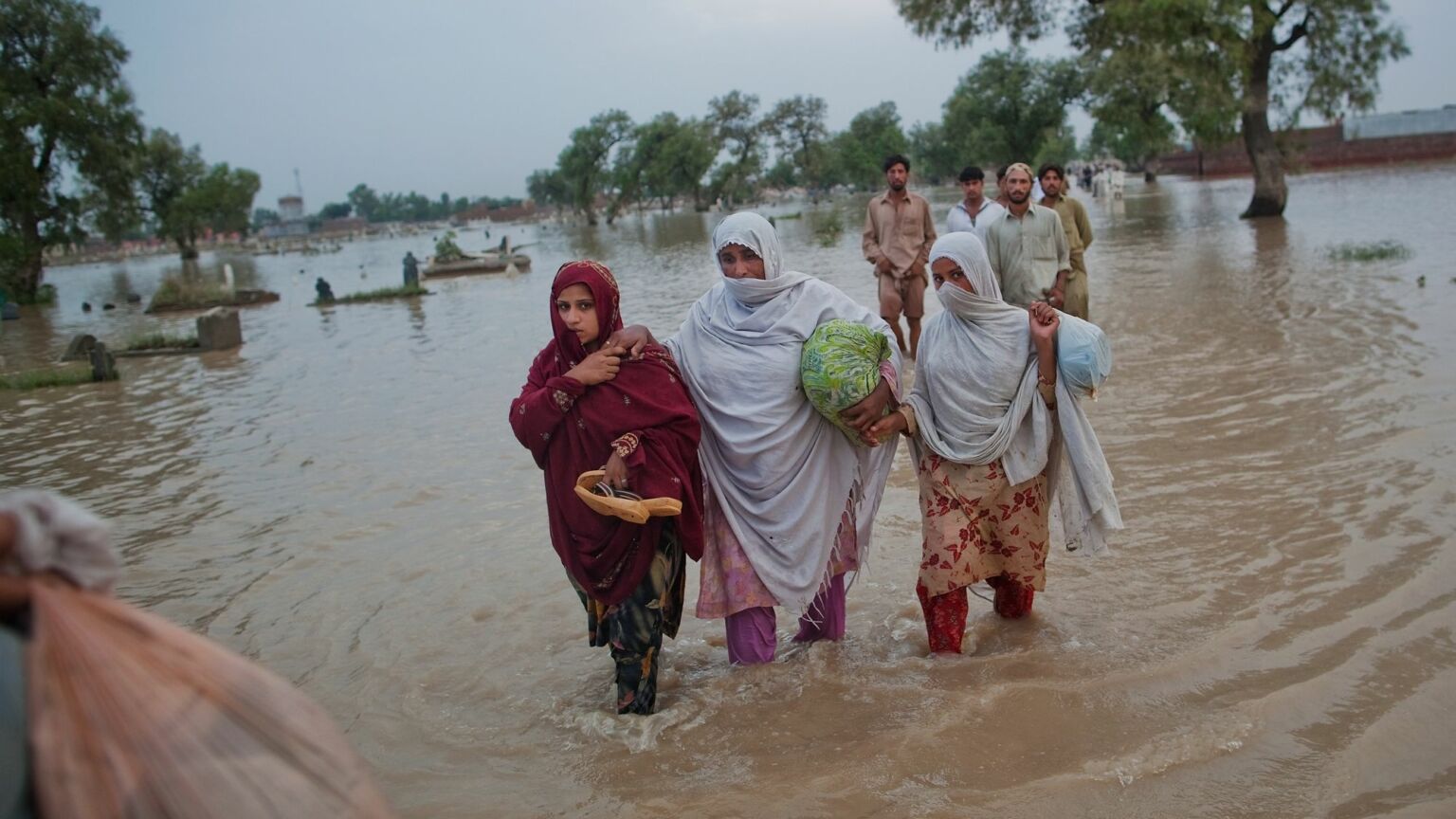 Devastating floods have enveloped the provinces of Sindh and Balochistan in Pakistan. By the end of August, a third of Pakistan was said to be underwater. Over 1,100 people have died, 3,600 kilometres of roads are now impassable, one million houses have been damaged and one million livestock lost. Overall, over 30million people have been affected – one in seven Pakistanis. The World Bank and other international institutions have pledged hundreds of millions of dollars for reconstruction, though the damage caused is estimated to reach around $10 billion. The floods are believed to be the worst in Pakistan’s history.

Pakistan’s leaders have been united in blaming a singular cause: the greenhouse-gas emissions of the developed West. Pakistan’s foreign minister, Bilawal Bhutto Zardari, told CNN that his people were ‘paying the price in their lives, their livelihoods, for the industrialisation of rich countries that has resulted in this climate change’. Planning and development minister Ahsan Iqbal said: ‘People are enjoying their lives in the West but someone here is paying the price.’

Other global leaders have joined in the condemnation. UN secretary general Antonio Guterres issued a warning to the developed world. ‘Let’s stop sleepwalking toward the destruction of our planet by climate change’, he said, while appealing for a paltry $160million in aid. ‘As we continue to see more and more extreme weather events around the world, it is outrageous that climate action is being put on the back burner, putting all of us, everywhere, in growing danger’, he added.

The elite consensus that climate change is the main cause of the flooding – and that ‘climate action’ is the main solution – is deeply troubling. It will do little to resolve the plight of the Pakistani people.

Firstly, it is not at all clear that climate action is being put on the ‘back burner’ as Guterres claims. Certainly, many Western nations are scrambling to maximise domestic fossil-fuel production thanks to the global energy crisis. But Net Zero targets remain firmly in place. Besides, the US, the world’s second greatest emitter of CO2, is ploughing tens of billions of dollars into renewables and energy efficiency. What is that if not putting climate on the ‘front burner’?

More importantly, by blaming climate change, Pakistan’s leaders and the global elites are deflecting from the real reason Pakistan’s floods have been so devastating – Pakistan’s failure to modernise and develop. And while Pakistan undoubtedly experiences a great deal of flooding, the link between a nation’s development and its ability to protect itself from natural disasters is well established.

Pakistan’s GDP has grown significantly over the years. In constant 2015 dollars, it stood at just $17 billion in 1960, rising to $339 billion last year. However, compared with China and India, growth in GDP per head has been low. Between 1989 and 2019, China’s GDP growth per capita was about seven per cent and India’s was four per cent. Meanwhile, for Pakistan, it was just below two per cent.

Partly, this is due to an explosion in population growth. Pakistan’s population has increased five-fold since 1960 – from 45million then to 225million in 2021. This is partly driven by the Islamic government’s pro-natal policies (the government banned the advertising of contraceptives in 2017) and by a lingering dependence on technologically backward family-based agriculture (which still requires 42 per cent of the labour force).

Population growth is not in itself a problem – indeed, it can often be a spur to economic growth. But in Pakistan’s context, a corrupt, reactionary and militaristic elite has failed to create the conditions for its growing population to thrive. In Pakistan today, around 46million people live below the poverty line. Around 50million people lack access to electricity, and Pakistan has some of the world’s most frequent power outages.

In short, poverty, poor flood defences and sluggish development have contributed enormously to the scale of the current devastation.

Another problem with blaming climate change is that it is just not possible to attribute any individual weather event to the changing climate with any accuracy. Climate change is a phenomenon of decades, centuries and millennia. Meanwhile, individual instances of extreme weather are products of weather dynamics that shift over days, months and seasons.

There is now a trendy branch of climatology – called ‘attribution science’ – that claims it can link individual extreme weather events to climate change. But this ‘science’ is a blatantly unscientific and partisan exercise.

Here’s how it works: a scientist runs two computer models that simulate weather events on Earth. The first model (Planet A) aims to replicate the current climate on Earth. The second model (Planet B) is of a counterfactual scenario, which aims to approximate what the Earth would look like without man-made climate change. Both models then measure the frequency and probability of extreme weather events in their respective worlds. The difference in frequency and intensity of the weather events in the Planet A and Planet B simulations is then used to establish how likely it is that a given event was caused by climate change.

All of these claims depend on the output of computer models. There are multiple models. And while each one is said to be authoritative, each will give different results. In these exercises, actual science goes out of the window.

Besides, the whole gambit is geared more towards generating media coverage than establishing scientific truth. For instance, Friederike Otto, of Imperial College London’s deep-green Grantham Institute, once revealed: ‘Whenever an extreme event happens, usually people ask, “Did climate change play a role?”. We aim to provide scientific evidence to answer that question within the news timeframe – so within two weeks of the event occurring.’

The science of climate attribution has always been more about politics than science. In fact, it was developed as a means for developing countries, such as Pakistan, to bolster their claims of compensation for climate-related loss and damage from developed economies. So as well as relying on a muddle of models and on counterfactual histories, this attribution science is also mired in a legalistic blame game.

Even environmentalists concede that in attribution science ‘the putatively apolitical approach becomes political and deeply problematic’. It is a means for bolstering the green narrative that ‘climate action’ is necessary for what they call ‘climate justice’. This is the view that the developed world must cut its CO2 emissions as a form of reparations to the Global South.

But is ‘climate action’ really the best way of helping underdeveloped countries struck by natural disasters? In the immediate term, Pakistan needs far more humanitarian aid than the West is currently willing to provide. And in the longer term, Pakistan needs robust economic development. Only then can it protect itself from the floods and other extreme weather events that are tragically likely to hit it.