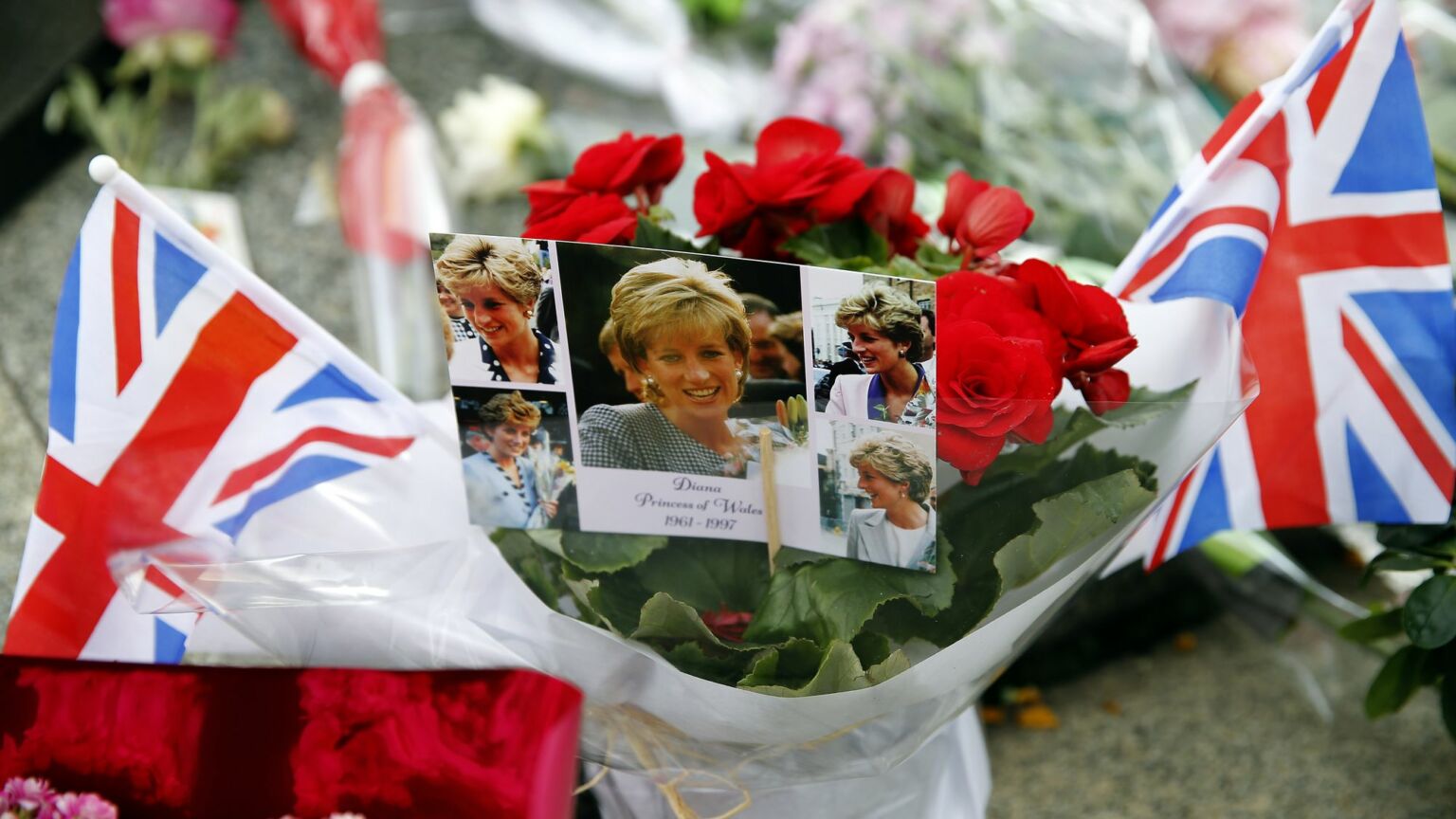 Princess Diana and the new age of deference

How Diana’s death gave rise to our draconian era.

Two things happened on this day 25 years ago. First, Princess Diana died. The most famous woman in the world, just 36 years old, killed in a car crash in Paris. And second, Britain changed, dramatically. We moved, or were shunted, from one era into another. From the Second Elizabethan Age that valued stoicism and privacy into the uncharted territory of what we might call Diana’s world, one in which confessing your vulnerability is all the rage and the dividing line between public life and private life has been all but erased. The first event, the death of a young princess and mother, was a tragedy for the Windsors and Spencers. The second event, the death of Old Britain, was a tragedy for the rest of us.

It’s worth reminding ourselves of the mania of the post-Diana moment. Looking back, snooty commentators only see the madness of the crowd. They tut at those swarms of people who camped out on the Mall to catch a glimpse of Di’s coffin or queued for hours to write a soppy message in a book of condolence. A few years ago a writer for the Independent recalled how ‘half the nation went into convulsions over the death of Diana’ and how they were ‘aided and abetted by the tabloid press’. In truth, the most notable thing after Diana’s death was the hysteria of the elites. Yes, millions of people laid flowers and teddy bears and shed a tear or two – her death was a huge shock. But it was the establishment, from the newly installed Blair government to the BBC, that treated this death of a princess as the death of a saint, as a borderline holy event that heralded an entire new era. The Diana-mourning masses went home again – it was the Diana-sanctifying elites that tried to remake the nation in her blessed image.

Historian Peter Ghosh has challenged the idea that the weeping throng set the tone following Diana’s death. Actually, he says, there was a ‘mindless, uniformitarian conformism’ in the media regarding the hallowed status of Diana and the epoch-shaking consequences of her untimely demise. The public mourning itself had been given ‘an extraordinarily powerful kickstart by Blair and Birt’, Ghosh notes (that’s John Birt, then director-general of the BBC). Blair made his Campbell-spun comments about ‘the People’s Princess’ mere hours after her death, while Birt instituted a ‘machine-like precision and uniformity’ in the Beeb’s coverage of it all, says Ghosh. Indeed, some of the plebs protested over the BBC’s wall-to-wall Diana coverage. Ninety-eight per cent of those who contacted Radio 4’s Feedback programme in that strange week did so to complain about the ‘over-coverage’ of Di’s death. The Beeb eventually relented and put ‘normal TV’ on BBC Two.

The problem wasn’t the masses going into ‘convulsions’ over Diana. It was the fact that, from on high, there was a ‘draconian’ pressure, to use Ghosh’s word, for everyone to emote in the right way. We witnessed a ‘forced recruitment of everybody into the same emotional mould’, as Christopher Hitchens put it. Woe betide anyone who questioned the elites’ Diana mania. In an early example of woke intolerance, of what we now call cancel culture, WHSmith and other newsagents refused to stock Private Eye over its allegedly offensive front cover on the hypocrisy of some of those mourning for Diana. Ian Hislop estimated that the Eye lost one-third of its normal sales as a result of this censorship. That’s the price you paid for failing to genuflect to the top-down ‘mindless conformism’ on the Diana affair.

The worst sinners were those who interfered with the ocean of flowers and teddy bears left outside Buckingham Palace. Two Slovakian tourists were jailed for 28 days for taking some of the bears. A 20-year-old man from Sardinia was fined £100 for stealing a bear. He was punched in the face outside court by a man who shouted: ‘My Diana! She was the queen of everybody’s hearts.’ It is of course wrong to steal mourning mementos. The prosecutor in the case of the Slovakian tourists had a point when he likened it to grave-robbing. But 28 days in the slammer for taking some teddies? Even the Slovak Embassy felt it necessary to condemn the tourists’ ‘despicable and unforgivable’ crime. Such was the level of hysteria in establishment circles in the wake of Diana’s death. ‘London had turned into Pyongyang’, as one observer put it.

The draconianism had a purpose. Some saw in Diana’s death the chance to usher in a different political moment, one that chimed with the ideologies of an emergent new elite. In the words of the New Statesman, the aftermath of Diana’s death ‘has shown, even celebrated, the end of the age of deference’. The Observer’s Will Hutton said the response to her death suggested that we are finally ‘freeing ourselves from the reins of the past’. From the political class to the Church of England to the therapy industry, institutions openly hoped that the public sorrow over Diana’s death might contain the seeds of a new society. As one writer said of the Church, it ‘seemed to take heart from the unexpected and at least partly spontaneous creation of a new kind of secular religion or religiosity’. The old religion of God and prayer and caring for others may have been waning, but the new religion of Diana and public emoting and caring for the self was on the up. Happy days.

The new religion was a very poor substitute for the old, of course. It may have had its sinners, like the teddy-bear thieves, and its blasphemers, like Private Eye, and its rituals, like the mass laying of flowers and the punching in the face of anyone who dared to desecrate such mawkish spectacles. But it represented, fundamentally, a retreat into the self. What the managerialist and therapeutic elites most hotly anticipated about Diana’s death is that it would hurry along the death of the stiff upper lip, of the self-counselling citizen, of the old idea that emoting is something you do in your private life, not your public one. In the words of one of Britain’s best-known psychotherapists, Susie Orbach, Diana’s death pointed us towards a new era of ‘emotional literacy’. Christ died for our sins; perhaps Di died for our emotional hang-ups. A new heaven of self-revelation was on the horizon.

The end result was the diminished citizen. The erasure of the line between public life and private life injures both. Public life is denuded of its depth, of its necessary seriousness, when it is invaded by emotion. And our private lives become the property of the elite – especially of its therapeutic wing – when we buy into the idea that stoicism is bad and only gurus with PhDs can guide us through life’s harder moments. We get an infantilised public sphere and a colonised private one, and no space in which we can truly, freely be ourselves. That ‘forced recruitment of everybody into the same emotional mould’ that Hitchens warned of wasn’t only a problem in the crazy days after Diana’s death. It is also the First Commandment of the new religion, this religion that validates psychic fragility more than individual forbearance, all the better that the managerial elites might manage us.

This is why it is wrong to characterise the post-Diana moment as the end of the age of deference. For really we have entered a new age of deference, more draconian than the old. Today we must bow and scrape to the cult of frailty, to the sanctity of ‘lived experience’, to the gods of emotion. Refuse to do this – refuse to bear your soul to all-comers – and you’ll be accused of being ‘in denial’, just as dissenters from the old religion were likewise branded ‘deniers’. Today we aren’t expected to submit to Queen and Country, but we are pressured to bend the knee before the cults of therapy and identity. Our new masters are the expert classes who presume to understand our emotions and needs better than we do ourselves.

To be clear, none of this is Diana’s fault. It wasn’t even Diana’s death that directly birthed this draconian new world. Rather, that tragic event became a catalyst, and a moral justification, for the elites’ speeding along of a new form of governance that was already ascendant. Elizabeth still reigns, but it’s the Cult of Diana that rules. Us stoics need to speak up.