The war against the Fourth of July

The massacre at a Fourth of July parade speaks to a hollowing-out of America’s soul. 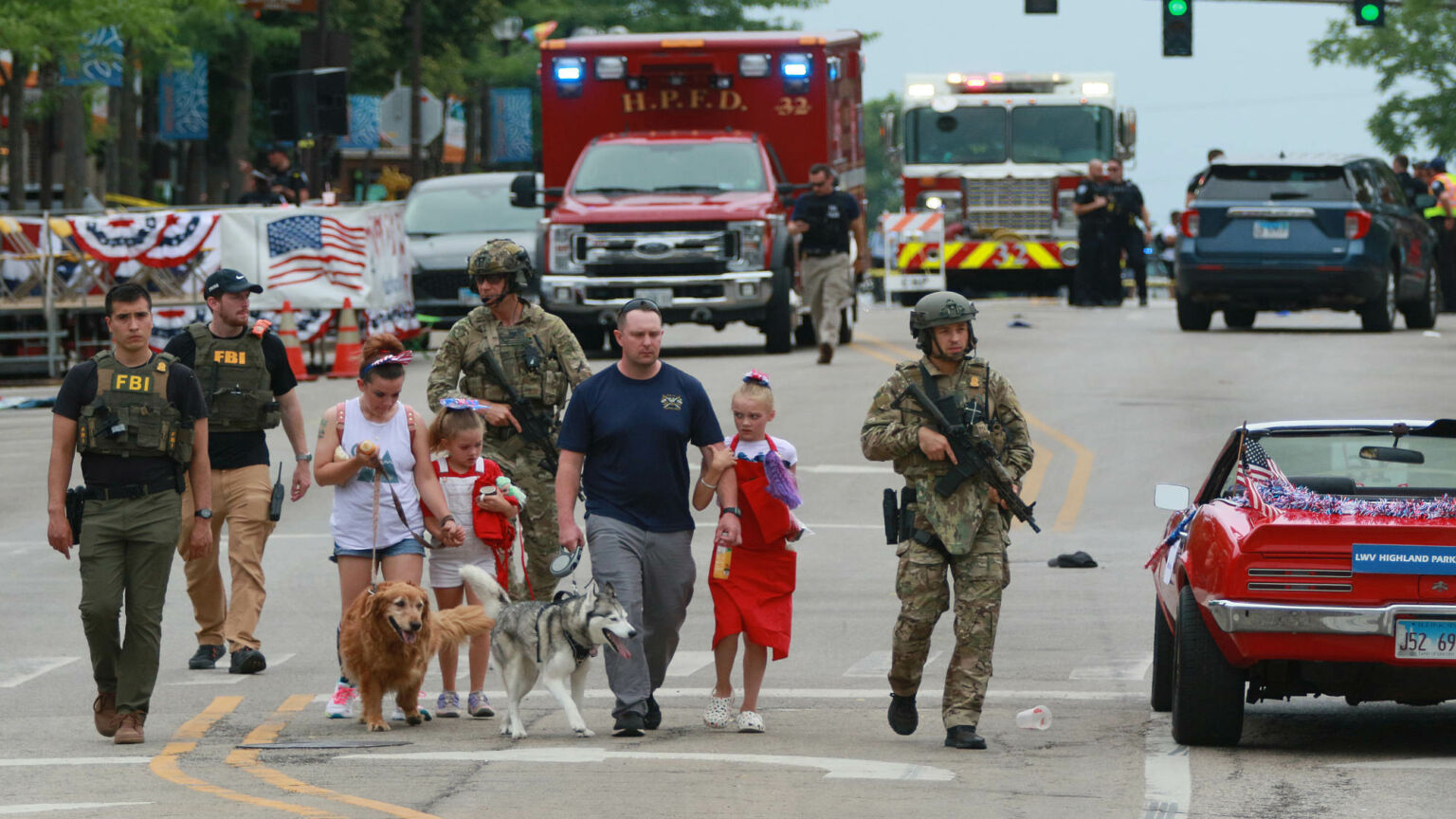 If you cannot even attend a celebration of your nation’s independence without risking murderous assault, then there is something wrong with your nation. Surely even in these fractious times we can all agree on that. It happened in France in 2016, in Nice, on Bastille Day. An Islamist mass murderer used a 19-tonne truck to slaughter 86 people whose only crime was to commemorate one of the great revolutionary events that helped to make France free. And it happened in that other esteemed republic, the United States of America, yesterday. In Highland Park, a suburb of Chicago, a man opened fire on a crowd of happy, cheerful citizens who were celebrating America’s independence. He killed six.

It remains to be seen why he did it. The suspect, Robert E Crimo III, aged 22, looks like a rather pathetic individual. Thin, frail, a bad rapper, hyper-online – the horror of what happened in Highland Park is almost compounded by the fact that it was allegedly committed by such a wretched human being. Some claim Crimo is Antifa, others that he is MAGA. One line of inquiry is that it was a hate crime – Highland Park has a substantial Jewish population. It is possible that there was no real motive. That this was just an act of nihilism, of fame-seeking violence. But however it turns out, it was political. Murdering people at a Fourth of July parade is not only wicked – it makes a statement, too, whether intentionally or not.

This feels different to a mass school shooting and other acts of gun violence that take place in the US. The gravity of the loss of life is the same in all instances, of course. But shooting up a Fourth of July parade makes a bloody comment about your country as well as about how little regard you have for human life. Everyone in the US knows what the Fourth of July is. They know it is an honouring of that day in 1776 when the Declaration of Independence was ratified and the United States of America was established. Crimo will have known when he allegedly pulled out his gun that he was not only targeting innocent individuals – he was also violently condemning a public celebration of the wonder and virtues of American independence. He was expressing bloody contempt both for his fellow citizens and for the nation they live in and love.

This was a terrorising of the Fourth of July, an assault on patriotism. And here’s the thing: it didn’t happen in a vacuum. No, it happened at a time when there is a growing discomfort and even disdain for the historic events of 1776 among many in the opinion-forming set. In woke circles it is now de rigueur to be sniffy towards 1776. America didn’t really start during that revolutionary foment, they say – it started in 1619, when the first slaves were shipped over. In short, America is a racist endeavour, not a revolutionary one. Or they say the independence of 1776 wasn’t worth the scroll it was written on, given that slavery still existed, and would continue existing until 1865. So what are we really celebrating on the Fourth of July? Freedom for white folk? The fashionable scorn for the Fourth of July was summed up in the name of an event organised by the Tucson Women’s March and promoted on Twitter by an actual wing of the Arizona Democratic Party – ‘Fuck the Fourth’ it was called.

‘Fuck the Fourth’ – that just about sums up the contemporary bourgeois disdain for the founding of America. For its founding ideals, its founding fathers. There’s the 1619 Project, initiated by the New York Times, which seeks to ‘reframe the country’s history’. What this means is overhauling the entire American story so that the nation is seen as springing from the arrival of slaves in 1619 rather than from the War of Independence in the 1770s and 1780s. During the post-George Floyd tumult of 2020, when protests against police racism frequently morphed into riots and into violent assaults on statues of America’s revolutionary founders, that date of ‘1619’ was everywhere. In Portland, Oregon, protesters dragged down a statue of George Washington, set fire to its head, and then daubed ‘1619’ on its battered remains. This was not, as the protesters fantasised, an act of grassroots radicalism – it was a physical manifestation of the elite’s turn against the history of their nation. Those arsonist assaulters of Washington were essentially the militant wing of the New York Times.

Meanwhile, the war of words on the founding fathers has intensified. One of the greatest of all – Thomas Jefferson – has been singled out for special ire. This warrior for freedom and democracy is now frequently libelled by the woke set as little more than a slave owner. A committee in Washington, DC recommended the removal of his name, and that of Benjamin Franklin too, from government buildings. Shamefully, last year a statue of Jefferson was removed from City Hall in New York, where it had stood for 187 years, after a commission led by Bill de Blasio’s wife, Chirlane McCray, agreed that it made black members of staff feel uncomfortable. This is how high up the ‘Fuck the Fourth’ hysteria now goes – right into the worldview of such establishment Democrats as the de Blasios.

Yesterday, President Biden’s initial response to the Fourth of July massacre seemed perfunctory, half-hearted. But later he rightly said that this bloody assault spoke to an ‘ongoing battle for the soul of America’. Is Biden and his administration on the right side of that battle, though? Where are their fulsome defences of Jefferson, their robust pushback against the elite agitation to hollow out America’s revolutionary, democratic history? In fact, the Biden administration has favourably cited the history-rewriting 1619 Project. And both Biden and Kamala Harris appear to have embraced the elite consensus opinion that says America is stained by racism. Last month Harris decried America’s ‘400 years of slavery’, overstating the actual period of slavery by more than 150 years.

Of course, none of the Fourth-bashers in the elite bear any responsibility for the violence at that Fourth of July parade yesterday. They should be perfectly at liberty to say ‘Fuck the Fourth’ (a liberty that Jefferson and his comrades secured for them). But it is striking indeed that the blame game that always follows mass shootings in the US has been more muted this time. The kind of people who say Trumpian rhetoric and right-wing news broadcasters are stoking acts of violence are not as noisy as they normally are following this mass shooting that essentially said with bullets ‘Fuck the Fourth’. My view is that only individual killers are to blame for what they do – I wish the finger-pointers in the smart set would apply this principle too, and consistently.

We are not likely to see a rise in Fourth of July violence. No, the consequences of the woke elite’s turn against 1776 will be both more mundane, and more far-reaching. Telling American youths that the founding fathers were scoundrels, and that racism is more central than revolution to the soul of the United States, will alienate these young citizens from their nation. It will estrange a new generation of Americans from the history and the meaning of America. This could sow further social disorientation and strife. After all, if you are led to believe that your nation is a place born in sin, pock-marked with unspeakable crimes, why would you take pride in it? Why would you commit to it? Why would you love it? We need a firmer defence of 1776, of that radical, world-changing moment when, for the first time ever, a nation was founded for the very purpose of liberty. The good people of Highland Park love their country – why don’t more members of the elite?