Amber Heard and the crisis of feminism

Why the woke set believes some women and tells others to shut the hell up. 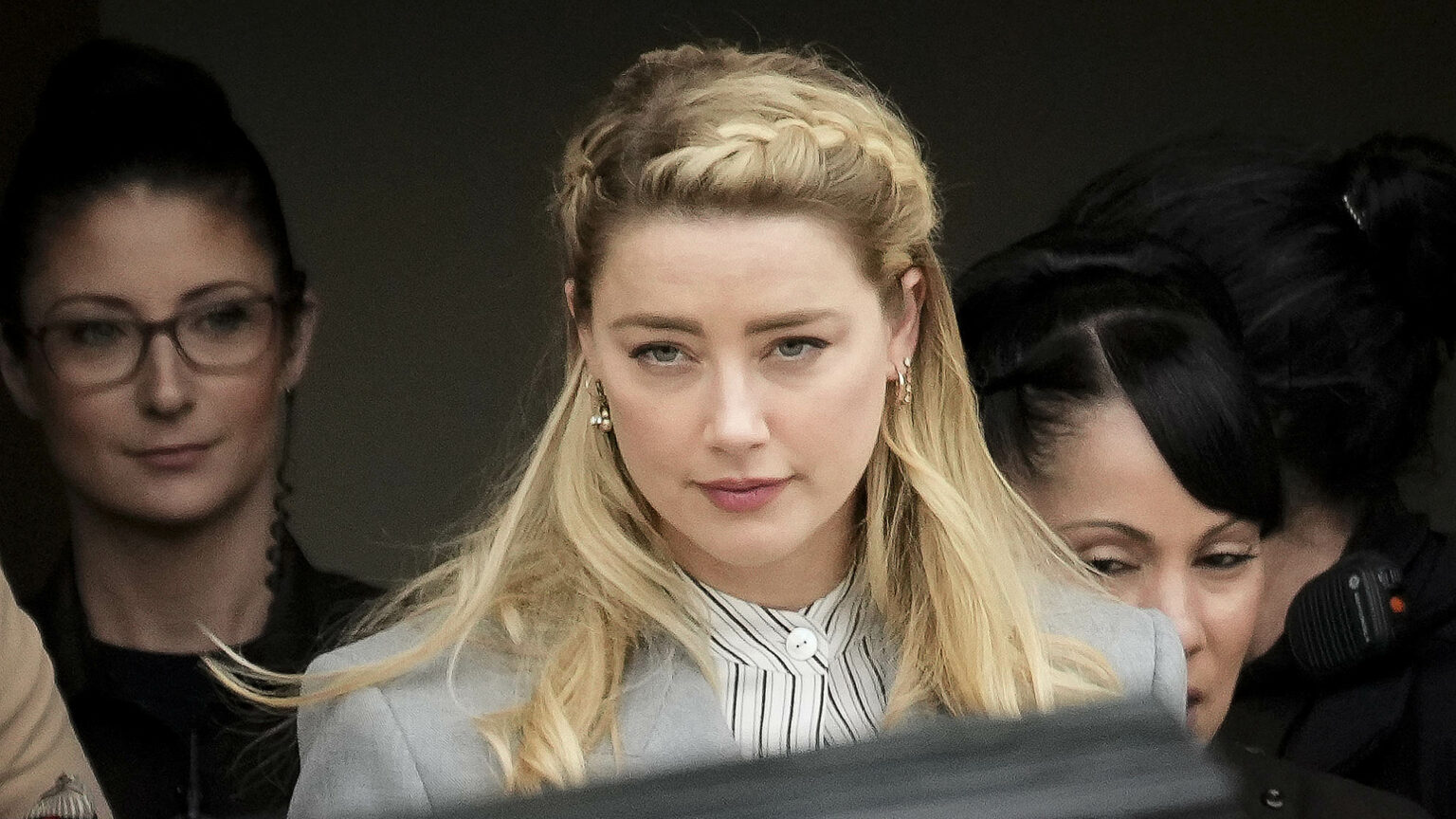 Do you believe Amber Heard? Do you believe her when she says she was abused by Johnny Depp? And that Depp was such a cokehead that he even used a tampon applicator to ingest the white stuff? And that it wasn’t her who shit in Depp’s bed, it was their dog? Belief in Ms Heard, unflinching faith in everything she says, has become something of a moral litmus test over the past few weeks of the Depp / Heard libel trial. Good people believe Heard, bad people think she’s a lying narcissist. ‘Why it’s time to believe Amber Heard’, as a headline in Vogue said. Those who doubt ‘her truth’ have clearly experienced an ‘erosion of empathy’, the fashion bible declares.

Now that the nauseating spectacle of the Depp / Heard legal spat has come to an end – and as journalists across the globe await the verdict with breath that is bated – it might be a good time to reflect on what this kind of ‘belief’ means. Sure, there have been some mean anti-Amber memes, mostly focusing on her alleged penchant for spiteful defecation or her alleged sneaky snorting of cocaine from a Kleenex while she was in the actual stand. Depp-heads think that everything Heard says is a lie, which strikes me as a pretty partisan and naive way to approach a complex celebrity quarrel. The idea that Heard cannot open her mouth without committing an untruth is clearly unfair. And yet the idea that she must be believed, and that failure to believe her is a sign of moral corruption, is wrong too. The notion that women are either devils constantly weaving deceits or angels whose every utterance is the gospel truth is incredibly regressive. In this sense, the Heard / Depp trial has shone a light, albeit unwittingly, on some serious problems in what passes for feminism today.

The cry of our post-#MeToo era is ‘Believe women’. But over the past couple of years it has become painfully clear that this does not mean all women. ‘Belief’ is a luxury enjoyed by rich women and right-on women, but it is often denied to poor women and women who are ‘problematic’ in some way. Consider the extraordinary disparity between the media sympathy accorded to middle-class, Oxbridge-educated female journalists in the UK who say they were once clumsily hit on by aging Tory blokes and the media’s reluctance to focus for too long on the dire instances of rape and abuse suffered by working-class girls at the hands of grooming gangs made up of men from mostly Muslim-heritage backgrounds. The middle-class women, the ‘good’ ones, were believed instantly, and given prime-time space to tell their stories. The other women, the ‘questionable’ ones, were treated as a pesky menace to multiculturalism and essentially told to pipe down.

Even during the Depp / Heard trial – even as Vogue and other woke outlets were insisting that believing Amber’s every claim was the solemn duty of all right-thinking people – we had examples of women being disbelieved. So when it was reported that a young female school student in the UK had been severely bullied for questioning the ideology of transgenderism, the kind of people who normally say ‘Believe women’ essentially said this young woman was iffy as hell. Or at least that the story of her abuse at the hands of 60 trans-believing fellow students sounded very fishy. The Guardian’s Owen Jones led the charge. This ‘story’ – his scare quotes – sounds incredible, he said. He reached out to the 60 students – the alleged bullies, remember – so that he could hear ‘their story’. If you were to use scare quotes around the word story in relation to Amber Heard – Amber’s ‘story’ – you’d be branded a disbelieving bigot. But do it in relation to a girl allegedly bullied for doubting the gospel of genderfluidity and you’re a progressive hero.

Then there’s the Wi Spa incident. People don’t talk about it much these days, but this was surely one of the most shocking examples of British media failure in recent times. This story – or ‘story’, as some might have it – concerns a group of women who were using the female changing area in a spa in Los Angeles when a ‘trans woman’ came in with his tumescent knob swinging about. Bullshit, said the Guardian. It cast aspersions on the black woman who brought this alleged incident of flashing to public attention, pointing out that she’s a Christian. Shudder. ‘Her social-media page frequently features Bible quotes’, the Guardian said from behind its smelling-salts hanky. The whole story – ‘story’? – stinks, the Guardian reported. It is even ‘unclear whether a trans woman was actually present’ on the day in question. Erm, wrong. A 52-year-old male – which is how most of us refer to people with penises – has now been charged with exposing himself to women at the Wi Spa, and to a minor, too. Maybe those bitches were telling the truth?

And what about lesbians who tell their stories of being pressured by ‘trans women’ – again, men – into having sexual relations? They must not be believed, either. In fact, so-called progressives will literally protest against media outlets that provide those women with airtime. So when the BBC published an article in October last year headlined ‘We’re being pressured into sex by some trans women’, there was fury. The woke mob went mad. Trans activists and their allies gathered outside BBC HQ, with one of their placards reading: ‘We demand that the BBC retract the article.’ In short, not only should we automatically disbelieve lesbians who claim they have been abused by trans women (men) – we should silence them. Remove their filthy, dangerous claims from your website, is essentially what the so-called progressives in the woke set were saying to the BBC.

Just imagine if any of this happened to Amber Heard. If the Guardian sent its reporters to demolish her every claim, as it did with the Wi Spa women. If the BBC largely ignored her story, as it did with the girls and women targeted by grooming gangs in the UK. If woke people turned up outside the courthouse waving placards demanding that any article containing Heard’s side of the story should be retracted, as they did with those lesbians concerned about trans authoritarianism. There would be outrage. Indeed, the Depp-heads being criticised for disparaging Heard have only done what the woke elites have been doing in spades to ‘difficult’ women, whether that’s the black Christian woman who reported being flashed at in LA or the young lesbian who says she was cajoled into sex with a person with a penis – that is, cast doubt on a woman’s claims of abuse, and depicted the woman in question as a conniving, lying demon.

The woke set’s sanctification of Heard, who must be believed, alongside its casting of copious amounts of shade on other women, who must be disbelieved, speaks to some serious confusions in the discussion around feminism, women and truth today. It confirms just how ideological the ‘Believe women’ slogan has been. ‘Believe women like me’ would have been a more honest rallying cry for the woke, well-educated, pussy-hat-wearing warriors of the #MeToo era. They want to hear stories of wealthy celebrities falling victim to male bullying and high-flying female employees overhearing sexist jokes in the workplace. But working-class women being abused by Muslim men? And trans-critical women being bullied and threatened with rape and death? And young lesbians feeling pressured to have sex with penis people? That stuff they don’t want to hear about. It complicates their moral narrative. It pollutes their political agenda. And more importantly, it raises the possibility that their own belief system – their Ivy League, eccentric, reason-defying view that sex is changeable and that brown men are higher up the Oppression Ladder than working-class white girls – might be actively contributing to the abuse of women in certain settings. ‘Believe women, except those poor, stupid or blasphemous women whose oppression we have personally facilitated…’

There’s a broader problem with the cult of instant belief in (some) women’s claims of abuse. Automatic belief in women runs counter to the principles of justice. It negates the longstanding principle that everyone – yes, men too – should be presumed innocent until proven guilty beyond a reasonable doubt. And it demeans women by treating them as pure oracles of truth-telling. As the great Margaret Atwood said during the #MeToo moment: ‘To be clear, some women lie. Why not? They’re human beings.’ It is ‘actually detrimental to women’, said Atwood, to treat them as ‘angels of perfection’.

That is absolutely right: women, and men, who make claims of abuse and mistreatment should be listened to sympathetically, but they should not be immediately, uncritically believed. We should not presume that Amber Heard is a liar or a creature incapable of untruth; that she is a wicked bitch or an irreproachable font of veracity. She’s a human being, same as the rest of us. But here’s the question that should linger long after this crazy trial: why are Heard and other women believed by the woke elites, while ‘problematic’ women are written off and silenced as temptresses of deception? Answering this question will help us to understand why the cult of wokeness has such a serious and even misogynistic problem with womankind.