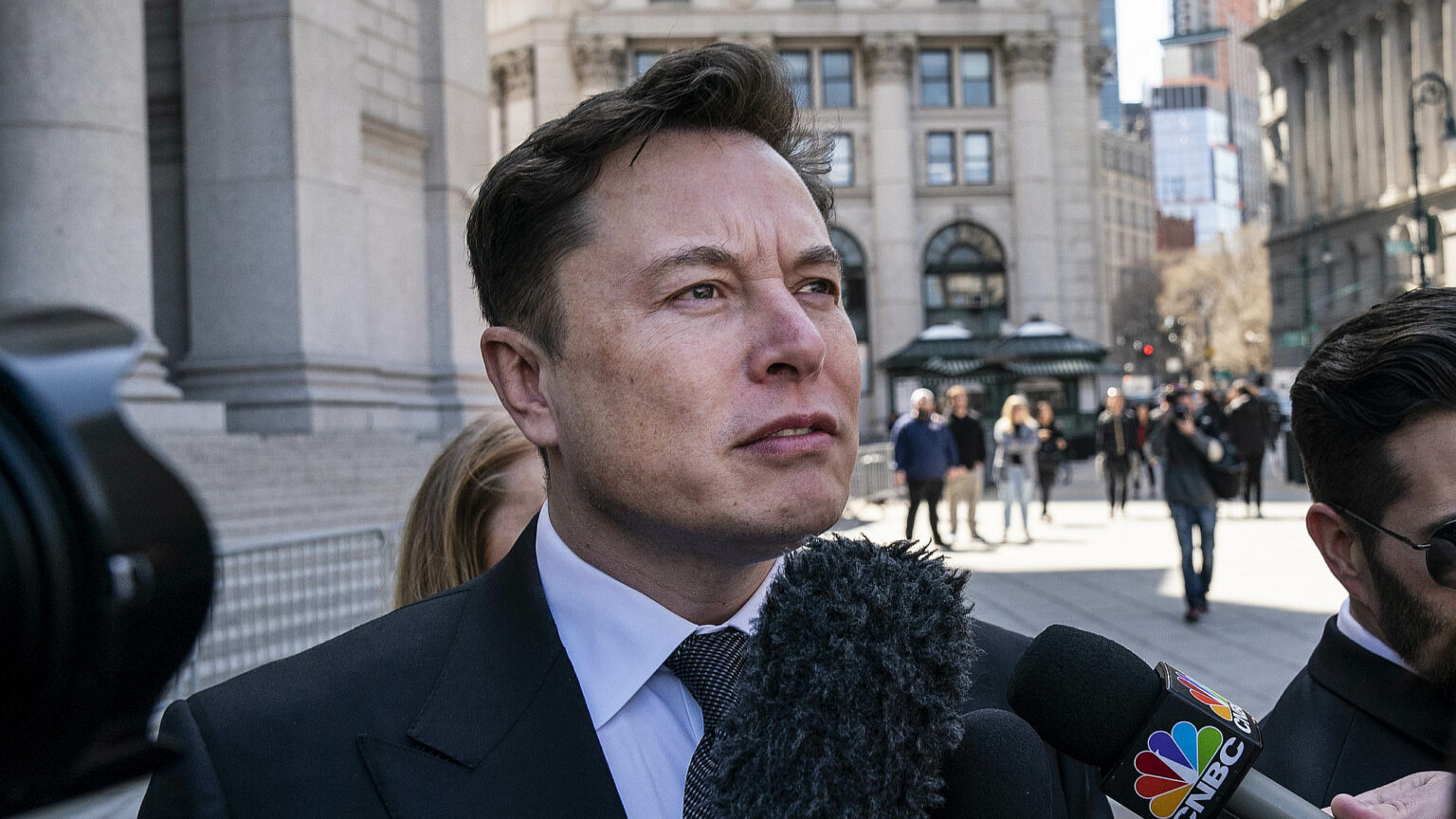 Elon Musk’s takeover of Twitter has revealed how terrified the elites are of freedom of speech.

Freedom of speech is the ‘dread of tyrants’. That’s how Frederick Douglass, the American abolitionist, statesman and former slave, put it in his seminal 1860 speech, ‘A Plea for Freedom of Speech in Boston’ – taking aim at a racist mob who had shut down an abolitionist meeting and the authorities that had refused to protect it.

The battle lines in America’s free-speech wars are very different today, as of course are the stakes. ‘Slavery cannot tolerate free speech’, thundered Douglass. He saw open discussion as the means to liberation. Today, those who might consider themselves his heirs think you can censor your way to utopia. But one thing at least remains stubbornly the same: more than 160 years later, free speech still fills the American elites with dread.

What else could we conclude from the week-long meltdown over Elon Musk buying Twitter? The political and cultural elites have been gripped by panic. Human-rights groups are up in arms. Woke celebrities are threatening to flounce off the platform. All because Musk – a self-touting ‘free-speech absolutist’ – says he wants to pare back Twitter’s content-moderation policies, to ensure that Twitter functions as a freer ‘digital town square’.

The richest man in the world purchasing one of social media’s most consequential platforms is perhaps an unlikely blow for democracy. We at spiked would certainly rather the fate of free speech online didn’t rest on which billionaire happens to be in charge. But Musk’s takeover of Twitter has at least demonstrated that the rest of America’s ruling class – certainly those who run its institutions and its government – are united in terror at the prospect of people being able to hear and say what they like.

According to CNBC, members of President Biden’s inner circle, Democratic strategists and Barack Obama are worried Musk might lift the ban on Donald Trump and cause ‘misinformation’ to swirl ahead of the next election. White House press secretary Jen Psaki dodged a question about Musk this week, but did refer to the president’s ‘concerns about the power of social-media platforms, including Twitter and others, to spread misinformation’.

Here we see a neat demonstration of how the Democrats’ years-long moral panic about ‘misinformation’ maps rather neatly on to censoring their opponents. That had already been made clear with the Hunter Biden laptop scandal – the New York Post exposé that Twitter and Facebook labelled as misinformation and censored in the run-up to the 2020 election, but has since been backed up as true by other outlets.

The human-rights establishment is similarly shaken by the prospect of more free speech on the internet. Amnesty International USA has warned Twitter’s new boss not to ‘erode enforcement of the policies and mechanisms designed to protect users’, noting the ‘disturbing persistence of hate speech on Twitter’. Among the activist set, meanwhile, Musk has been smeared as a racist whose definition of free speech is ‘allow[ing] white nationalists to target / harass people’.

The American elites, whose forebears gave the world the First Amendment, have apparently decided that similar standards cannot possibly apply on the internet. That ‘hate speech’ should be censored on social media has become common sense among so-called liberals, even though it is impossible to censor in US law. Censorship of those deemed ‘hateful’ – a now bloated category which, according to Twitter’s current policies, includes those who ‘misgender’ – has been outsourced to the private sector, and the elites are worried that Twitter under Elon Musk might no longer oblige.

Indeed, Big Tech censorship was never about a few oligarchs deciding to inflict their views on everyone else. Jack Dorsey, the Twitter CEO who presided over Trump’s ban and many more besides, is a sort of hippy libertarian and has wholeheartedly endorsed Musk. Facebook’s Mark Zuckerburg resisted the role that was being foisted upon him – as digital Minister of Truth – for years before he eventually gave in. The pressure on them to censor came from within – from the sort of Silicon Valley workers currently apoplectic about Musk’s takeover – and from without – from Democrats threatening to break up or regulate the tech giants if they didn’t clamp down on ‘misinformation’ and ‘hate’.

The American elites have come up with all kinds of convoluted reasons as to why it’s good and proper for Silicon Valley to wield its unprecedented power against those they disagree with. But those reasons keep changing in revealing ways. Before this week the argument was that Twitter can set whatever speech policies it likes because it’s a business and anyone who doesn’t like it can go elsewhere. Now they’ve suddenly changed their tune. And for all their deeply felt concern about misinformation the elites have turned a blind eye in recent years to how their war on misinformation has produced its own kind of misinformation – such as the hasty branding of the Hunter Biden story or the Covid lab-leak theory as bonkers conspiracy theories, only for it to turn out later that there was actually something to them.

This has become a vicious circle. Some of the genuinely mad movements unleashed in recent years – from QAnon to Stop the Steal to Covid anti-vax guff – are actually a demonstration of a well-worn argument against censorship. Namely, that censoring bad ideas doesn’t make them go away and can give them a glamour they do not deserve. Censorship has a way of making people think they’re on to something. Combine this with a mainstream media that now routinely prizes The Narrative over the facts – calling BLM riots ‘mostly peaceful’ and Kyle Rittenhouse a ‘white supremacist’ – and you’ve got a toxic mix. The crisis of trust in the mainstream has sent many looking for answers at the margins. And the more that do, the more censorship is meted out.

But then again this was never really about misinformation, was it? This is about America’s ruling class becoming deeply sceptical about one of America’s founding values, and deeply sceptical about their fellow citizens. So-called liberal elites simply do not believe that ordinary people can be trusted to sort truth from illusion and are now convinced that some higher power must vet their reading material for them. They believe that the answer to bad speech is not more speech, but ruthless corporate censorship. They have convinced themselves that free speech is a threat to civilisation, rather than the core of civilisation.

And all it took was for an election not to go their way. It is striking that this philosophical turn away from free speech, which had been slowly congealing in academia for some time, suddenly went mainstream around 2016 – after a certain someone became president and the coastal elites went looking for answers as to why those voters they’d either ignored or smeared as racists had suddenly taken against them. Trump’s election was the catalyst for the explosion of censorship on social media, which before then was restrained by today’s standards. Tellingly, discussing what Musk’s Twitter might be like in terms of freedom of speech, a tech writer for the Atlantic speculates it will look ‘a lot more like Twitter did in, say, 2016. This is not a good thing!’

Whether Twitter under Elon Musk will be a good thing remains to be seen. What we do know is that he’ll have a fight on his hands, from American elites who now believe censorship is all that separates them from barbarism. It’s a nice reminder that freedom of speech remains an incredibly radical idea, that it empowers those at the bottom and rattles those at the top. It is still the dread of tyrants – even the pathetic, hysterical bunch who rule America today.