Do I identify as Father Christmas?

What Christmas can tell us about the fashion for self-ID. 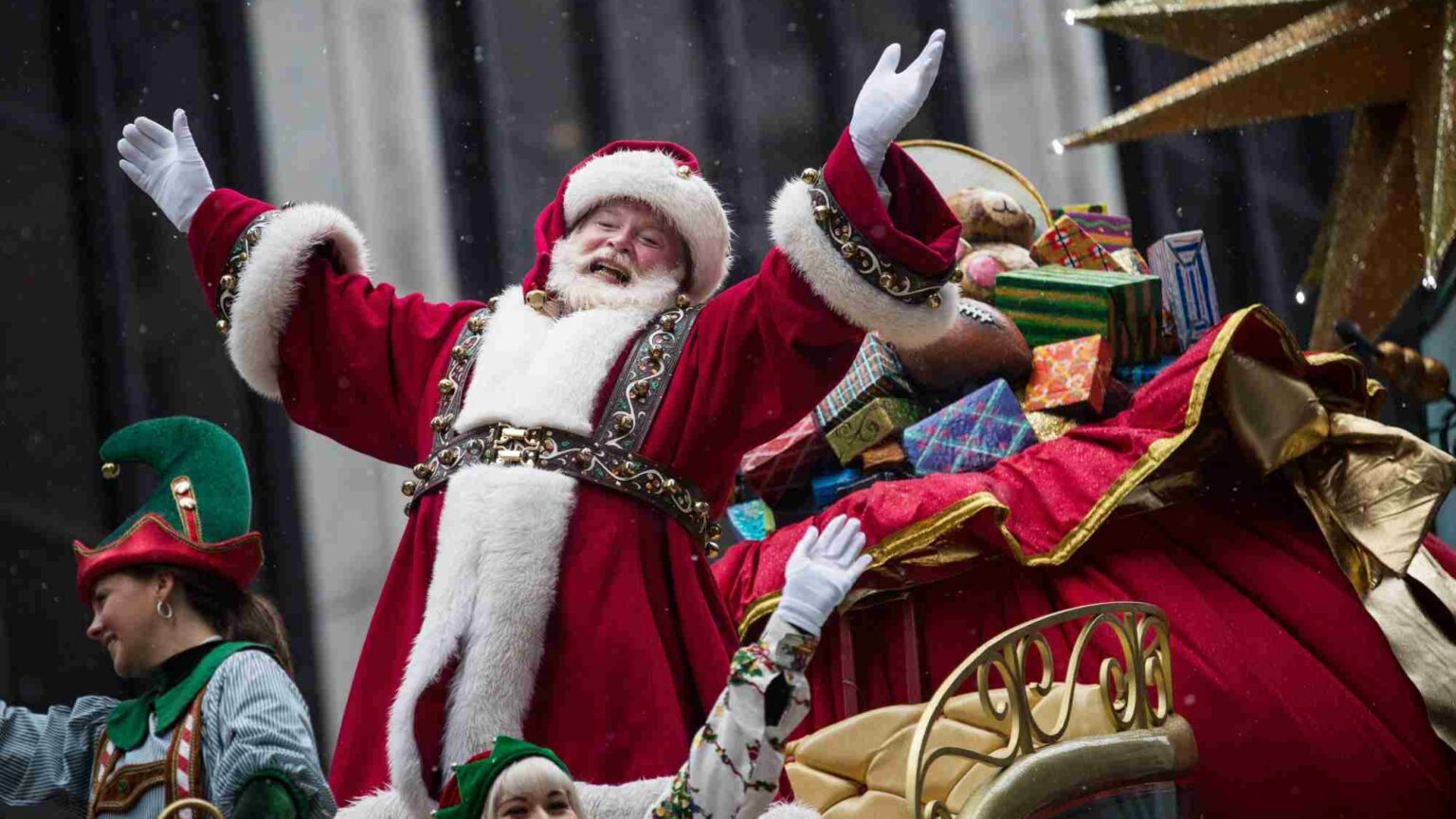 As Christmas approaches, it is traditional for even the most thunderous of columnists to try to raise the spirits, to radiate a little warmth, before they bundle their families into a wood-panelled station wagon and head off to their mountain retreat.* (*Uncork the scotch and begin to self-medicate in anticipation of the coming 48 hours of otherwise unmitigated sentimental slurry.)

Ideally, we should even find a way to weave the timeless message of the nativity – the hopes and fears of all the years – into a bridle for our current topical hobby horse. Well, I’m new to this lark, having been a regular columnist for all of about three months, but I reckon I’ve got a corker…

One of the more familiar banalities exchanged when discussing the endlessly metastasising social-justice movement is that it resembles a religion. Specifically, a kind of New England Puritanism, but without the traditional sense of knockabout fun. A nasty, yet surprisingly nimble variant on the virus that first landed on Plymouth Rock, whereby you get all of the original sin, and none of the redemptive power of song, prayer and Holy Communion.

I fondly remember when this was still quite a clever thing to say, and would impress my less online mates. Now it’s the sort of observation my daughter’s friends will earnestly share with me, when I am giving them a lift home, to let me know that they are not complete airheads (an unvocalised accusation they have somehow picked up from the angle of my head, the flare of my nostrils, or the drumming of my fingers on the wheel).

Until now, the woke themselves would have regarded the idea as absurd. How can our movement be a religion, they’d sneer, given that it loves science, and eschews the supernatural? Surely, it’s those redneck creationists that vote for Donald Trump who are the religious ones? And to be fair, social-justice warriors are in thrall to science, or rather, ‘The Science’. Superficially at least, they have a rudimentary understanding of cause and effect, ecology and environment, and even a grudging awareness of population genetics. They will not easily fall prey to the superstitions we see as synonymous with Medieval belief systems, and which are now scarcely more plausible than the unicorns and dragons on the nursery wallpaper.

But we are not deceived. The absence of miracles and a personal god in their belief system enables the woke to ignore the other, more powerful element of the religious impulse that is still very much in play and at work. The need to weigh, to judge and to condemn. To identify the righteous and the damned.

It has taken 2021 for the first real spiritual schism of our age to emerge, of the kind that defines the true religion. The sort of thing that so enlivened the experience of being a Christian in, say, early 17th-century Germany. For our era, it is the trans question. The question, not of whether to accord people with balanced rights and responsibilities, and treat people with respect, but whether transwomen are women, and transmen are men (the ‘trans’ prefix apparently having no more bearing on the authenticity of someone’s gender than would the words ‘paper’ before boys or ‘dinner’ before ladies).

The trans question is shaping up to be a mystery every bit as profound, and testing of faith, as the Trinity, the Resurrection and most aptly of all, the Eucharist.

The exact degree to which the wine and wafers of the sacrament actually become the blood and flesh of Christ, might have seemed at one time an almost absurdly fine distinction on which to split an institution as mighty as the Catholic Church. For all that transubstantiation was a proxy for every other disagreement from vernacular Bibles to relics, this did not prevent it becoming the hinge on which the two great halves of the Christian book have swung ever since. Yet it does seem to capture something profound. One one side there are those for whom the whole thing is really just a metaphor, an allegory, a reminder of a commitment to live well according to His laws – and on the other, those who really believe.

And if that isn’t an absurdly neat fit for the current trans debate, then I’m a monkey’s uncle.

I mean, it could hardly be more explicit. There is the transubstantiation faction – those for whom transwomen are women, for whom the consecration of self-ID changes the elemental nature of the being, leaving only the outward appearance intact – and there are those who think that the whole thing is really just a bit of a con.

Our failure to resolve this distinction has already been enough to end some promising political and academic careers, and this summer, some would say, the entire credibility of the opposition. But if we are to avoid replaying centuries of futile, bloody strife over a seemingly trivial dispute, might I suggest we learn a lesson from that other, more evolved branch of Christianity – the Great British Christmas?

I’m the first to admit that the power of the nativity has taken a knock in my lifetime. A visit to modern Bethlehem would surely disabuse anyone of the notion of a coming peace, at least one to be enjoyed on Earth. I can still remember my sense of shock when I first realised the Little Town didn’t look at all like the illustration on my Christmas cards. Nor do I recall my favourite carol featuring quite so many checkpoints. So perhaps it’s no surprise that many of us have moved on to a more… diverse understanding of the season.

But if our modern festival of Christmas is a woven braid of many different tinsel threads, from the pagan to the pious to the plastic and imported, there is still a wiry strand glowing among them like a little candle of hope, in among the bottles and baubles that provide more immediate promise of comfort and joy. I am referring of course to the Great Ineffable Himself, Father Christmas.

This has long been an age denuded of magic. Eliot’s ‘Waste Land’ made just about bearable with 4K, 5G and 6X. But almost no one, even in this joyless secular doomscape, would go so far as to deny His existence, and His divinity, entirely.

Nevertheless, a few questions regarding the logistics seem fair.

How does he reach an entire worldful of waiting children, in one single sweep of the globe? Is the miracle one of quantum superposition? Does he bend time, light and space itself, just as he is pictured bending the frame and chassis of his sleigh under his winter weight? It seems a stretch.

But one approach to understanding Father Christmas stands out, as offering a solution to the present impasse. It grows to some extent from a suspicion which overtakes children of a certain age, when raging hormones and approaching puberty can make them doubt their elders and to see them, in Holden Caulfield’s immortal phrase, as a bunch of ‘phoneys’. It is then that the suspicion grows, that Father Christmas is actually their dad.

It would be easy and tempting to simply dismiss their suspicions as nonsense. After all, this is a stage in life when many silly children convince themselves that they have pulled back the final curtain and revealed the true workings of the universe, when in reality they have just unscrewed the back of the TV, and still have no idea of the source, the power and the glory that illuminates the screen. Indulging such cockiness is no kindness.

But still, I think something glimmers that can be panned from this. We fathers who have participated in the ancient sacrament of the mince pie, the sherry and the carrot – we know that there is a mystery at the heart of this simple ritual that we never quite penetrate, nor if we are honest, would ever truly wish to. And as we commune with stocking, saucer and glass, to summon His presence, is there not some very real sense in which we do – however briefly – become Father Christmas?

So it seems to me, at any rate. And yes, he who can make you believe absurdities, can make you commit atrocities, as Voltaire reminds me every time I visit my own Twitter page. And doublethink, the dangers that lie in our capacity to hold two contradictory ideas in our heads at the same time, was one of the most urgent warnings of that other great literary pseudonym, George Orwell.

Nor is this a new idea. That which we now call ‘cognitive dissonance’, thinking ourselves very clever as we do so, is really just the still small voice of conscience, raising itself above the din of unworthy action.

Our conscience should for the most part be heeded. But perhaps there are some occasions when it might usefully be stilled again. When we might briefly look the other way, and instead let Keats’s negative capability have the hour, rather than the dull and merely true. When we can once again, for a very short while, indulge the harmless proposition of ‘as if’.

I wonder if it might also be an idea to pause in our anger and furious incomprehension at the culture wars and exercise a little patience, as we wait for the passage of time, like the action of the ocean, to take the rough edges off this new religion too, as it has the old one in which I was raised.

Very few of us now have occasion to sing – to exult! – that famous, magical verse in ‘O Come All Ye Faithful’ that is the privilege only of the Christmas morning congregation. But there is something to be said for allowing ourselves, as we watch our children unpack their miraculously swollen stockings, to believe just one or two impossible things before breakfast, even if only once a year.

And with that appropriately sentimental flourish, I wish you and yours all the comfort and joy that Boris will allow, and bid you all a very Merry Christmas. To the Station Wagon!