The death of 27 migrants should shame all those who have tried to silence discussion of this crisis. 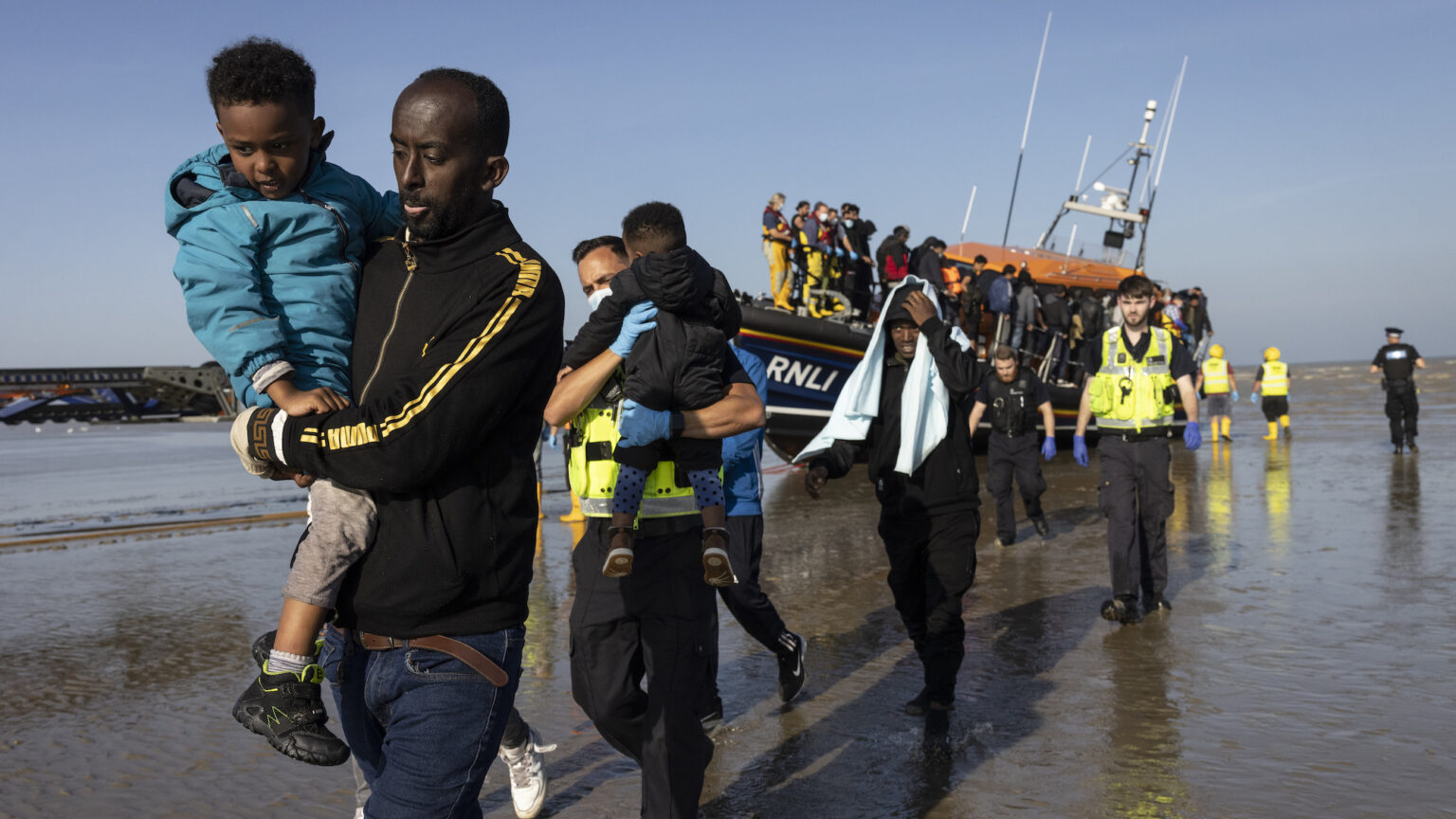 Will people now admit there’s a crisis in the Channel? For too long the cultural elites have downplayed the problem of people setting off on perilous and illegal journeys from France to Britain. Even as a thousand people a day started to arrive on English shores – 1,185 boat migrants arrived on 11 November alone – still these people wallowed in denialism. ‘It’s just asylum seeking’, Labour leftists dishonestly claimed. ‘We’re getting a handle on it’, the Tories unconvincingly said. People who called for a greater focus on this crisis, or who even just used the word crisis, ran the risk of being branded xenophobic. ‘This is desperate human beings looking for a better life, not a “crisis”’, woke scolds would say.

Well, now it’s more than a crisis – it’s a calamity. Yesterday there was a colossal loss of life in French waters. A boat on its way to the UK capsized and 27 people died, including a pregnant woman and three children. Already there is finger-pointing between France and Britain over who should bear responsibility for this horror. And already people are marshalling the disaster to their political causes, to their preferred outcome to the Channel crisis (if we can call it that now). But surely before we do any of that we should reflect on what a loss to humanity these 27 deaths are. These were not symbols or political tools; they were not exclamation points at the end of angry statements flying between the French and the British. They were people, aspiring to a new life, keen to enjoy the kind of lives we Brits are lucky to have. It is an almost unimaginable tragedy.

There has been so much dishonesty in the discussion of the Channel crisis. This issue more than any other highlights the unseriousness of the political and media establishments, their abject unwillingness to confront problems head-on, frankly, and with an eye for solutions. Even as the numbers of migrants arriving illegally in the UK has sky-rocketed this year, still there has been a stark lack of urgency in the political discussion. So far in 2021, more than 25,000 migrants have crossed the Channel. That overshadows the figure for the whole of 2020, when 8,461 migrants made it from France to the UK. Suggest it’s a problem that thousands of migrants on rickety boats are turning up in Dover every month and you’ll be called a racist. Anyway, there are more important things to discuss, you’ll be told.

Euphemism abounds. Linguistic duplicity is deployed to shroud the problem, to distract attention from it. Both the right and the left promote myths about the Channel crisis. People on the right, including the Conservative government, obsess over ‘traffickers’, over the faceless, money-mad ‘people-smuggling gangs’ who apparently land these migrants on English beaches. This is reality avoidance. Yes, the people who help to organise these journeys are unscrupulous and ruthless, but the idea that the migrations would stop if they were put out of business is a complete fantasy. It overlooks the fact that these migrants want to move. They want to come to the UK, and the vast majority of them want to come here for entirely understandable reasons – to have a better life. Unless the right acknowledges this, it will never truly get, far less solve, the Channel crisis.

On the left, meanwhile, all the talk is of ‘asylum seeking’ and victimhood. If anything, left-wing voices demean these migrants more than Tory ones do, through depicting them as the victimised, hapless seekers of asylum, when in truth what we have here is migration – people using their wit, strength and money to move, illegally in this situation, from one country to another. The idea that these predominantly fit young men who have already travelled thousands of miles to get to the Channel desperately require asylum in the UK is ridiculous. They need refuge from France? There is a reason the public is sceptical of the idea that the thousands flocking to Dover are ‘asylum seekers’. It demeans the important humanist task of providing asylum to those who need it to use this kind of language in relation to the Channel crisis.

Nobody benefits from the misnaming of these tough, resourceful economic migrants as asylum seekers. Except, that is, the virtue-signalling left itself. Indeed, there is a cynical, self-serving motive to the cultural elite’s fact-lite narrative about ‘asylum seeking’ on the shores of England. In presenting these migrants as the ultimate victims – victims of the regimes they once lived under, victims of French authoritarianism, victims of the apparently evil and uncaring Priti Patel – the woke left can position itself as the adult of the story, as the moral guardians who must always make the case for these voiceless, landless people. The left’s abolition of the migrants’ own agency, through its portrayal of them as the political weaklings of world affairs, helps to puff up its own grand role as the spokesperson for the downtrodden. The Woke Man’s Burden.

Then there is the question of borders, of the integrity of the nation, of the right of democratic states to determine who may enter and who may not. The Channel crisis exposes, in daily, horrific detail, just how cavalier all sides in politics now are about borders. Whether it’s those on the left saying it doesn’t matter if people cross our borders without the legal right to do so – they’re just pesky borders, after all – or those on the right who pay lip service to national integrity but fail, time and again, to uphold it, we now have a situation where the very right of a nation to control its frontiers is being continually questioned or outright undermined. If the boats landing at Dover are ‘symbolic’ of anything, it is of the elites’ abandonment of the ideal of national sovereignty and its embrace of the deathly, anti-democratic ideology of ‘post-borders’.

From the very top of the European Union down to the middle-class radicals who make up the Corbynista movement, from academia to pop culture, anti-borders is the fashionable ideology of our time. Even the UK’s own Border Force seems sniffy about borders, the very things it is deployed to protect. Last month the outgoing head of the UK Border Force described ‘bloody borders’ as ‘just such a pain in the arse’. This elitist hostility to borders dolls itself up as freedom – freedom of movement, freedom for ‘asylum seekers’ – when in truth it is motored by a powerful disdain for what borders represent: a people’s right to determine their own national destiny, democratically, free of external interference. It isn’t a love for freedom but rather a suspicion and even hatred for democracy that underpins the anti-borders outlook of everyone from Brussels technocrats to woke graduates.

The discussion around the Channel crisis highlights how much the nation state has lost its way in the 21st century. The boats don’t matter, it’s a small problem, there’s nothing we can really do about it anyway – all of this despondent chatter signals the elites’ capitulation to the technocratic ideology of anti-borders. It is the most fundamental failure of state to fail to uphold the integrity of the nation. A country that cannot master its own borders – and doesn’t even really want to, given borders are a pain in the arse – is sending a powerful signal to its citizens. Namely, that it is incapable of protecting them from harm; that it is unable, and unwilling, to uphold their rights of citizenship by protecting the thing that makes national citizenship possible and real in the first place – borders.

People have had enough of the elites’ lax attitude to national integrity. This is why we voted for Brexit. No, not to close our borders to all outsiders, but rather to assume democratic mastery over our borders in order to strengthen our sense of nationhood, democracy and citizenship. Even those of us who favour a more liberal approach to immigration should reject the elite ideology of anti-borders. In fact, we especially should reject it, because we should recognise that its true aim, or at least consequence, is not an improvement to the lot of migrants but rather an erasure of the institutions of national democracy and national law-making through which the case for immigration might be made. The elite’s post-borders world has not given rise to the happy-clappy global commune of their fantasies, but rather to weakened national democracy and ever-riskier forms of illegal migration. The Channel crisis is a crisis of democracy, freedom of speech and, now, of human life itself. It is one of the most important issues of our time.